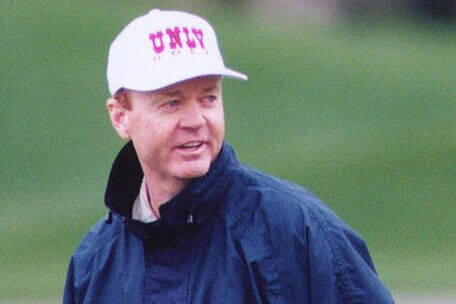 Dwaine Knight, who as coach has made the UNLV men’s golf program one of the nation’s best, will become the school’s golf director.

He will continue to do some coaching, but will be in more of an administrative role to help raise funds for the program.

“Spending more than three decades at UNLV has been extremely special, and I am proud that Rebel golf has come to mean so much to so many in Southern Nevada,” Knight said in a statement. “There are so many people that have had a role in helping us build the program, and I am grateful to them all.”

Assistant coach A.J. McInerney will be the interim coach next season.

Knight is a two-time national coach of the year and has been inducted into four halls of fame. UNLV won the 1998 national championship and has captured eight conference titles under Knight. He led the Rebels to 22 national finals and an NCAA record 31 consecutive regionals.

“Coach Knight is truly a legend, not only here at UNLV and in Las Vegas but also across the national golf community,” athletic director Desiree Reed-Francois said in a statement. “What he has built here with Rebel golf is nothing short of incredible, and we are pleased that his legacy, which includes team and individual national championships, will continue on as a valuable member of the UNLV athletics family.”

MOST READ
1
Raiders’ Maxx Crosby hit with fine by NFL