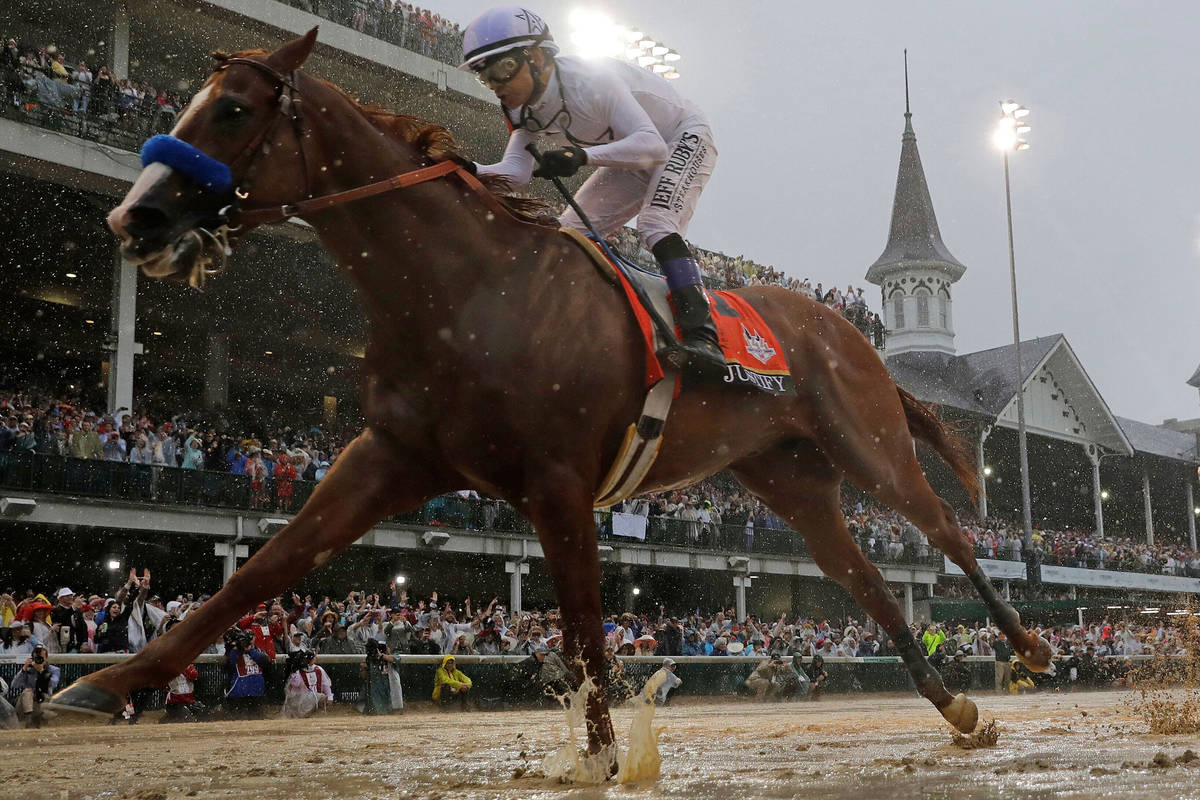 In this May 5, 2018, file photo, Mike Smith rides Justify to victory during the 144th running of the Kentucky Derby horse race at Churchill Downs in Louisville, Ky. The move of the Triple Crown’s first leg to Labor Day weekend due to the coronavirus pandemic will mark the first time the Derby won’t run on the first Saturday in May since 1945. (AP Photo/Morry Gash, File)

After further review, the stewards have ruled there will be no change.

That familiar litany of racing announcers everywhere when a claim of foul is found without warrant can now be applied to the state of California as a whole.

The controversy is one I wrote about several times last year: It began with a New York Times report in September that Hall of Fame trainer’s colt had failed a drug test after winning the 2018 Santa Anita Derby but that the complaint had been swept under the rug by racing authorities.

That was significant because Justify went on to capture the Kentucky Derby a month later, en route to a Triple Crown sweep and a quick and profitable ($125,000 per assignation) retirement. That the article pointed a finger of suspicion at Baffert, whose charms are lost on many of his racing rivals, only added to its appeal.

The case, as it turned out, was almost certainly the result of Justify and other horses stabled at Santa Anita, including stablemate Hopportunity, eating feed contaminated with scopolamine, a natural substance contained in the wild-growing jimson weed plant.

The board’s quiet dismissal of the initial complaint in executive session made the matter far worse by making it appear the board was covering up something sinister and apparently led to a few hasty departures from the body.

That could have been the end of it, but fast forward to January, when a fellow named Mick Ruis took the story in a new direction by suing the CHRB for failing to disqualify Justify. Regulations in place at the time of the incident, the suit argued, required a disqualification and the elevation of the runner-up.

If you haven’t guessed by now, Ruis is the trainer and owner of said runner-up, Bolt d’Oro, who is himself retired and enjoying a licentious life at $15,000 per roll in the hay. He had 400,000 good reasons to want Justify DQ’d, as that’s the difference between first-place and second-place prize money in the $1 million race.

That was the proceeding that led to Wednesday’s dismissal vote by the CHRB, which means that the owners of Justify and Hopportunity, who won the Tokyo City Cup Race in his next start, will keep their trophies and purse money.

The board did not second guess the previous board’s decision.

“Even if this panel were to disagree with the CHRB’s decision to dismiss these matters or the way the CHRB handled the situation, it cannot be argued that the CHRB lacked the authority to do so,” the decision said. “The law specifically allows such actions to take place and the CHRB followed the law.”

No other details of the settlement have been made public, but Ruis said at the time it was announced that the lawsuit was intended to ensure owners and trainers in California have an even playing field.

“This legal action was never just about the purse money,” he said in a statement in July. “I wanted to stand up for what’s right and to make sure that every horseman, from the little guy to Bob Baffert, is treated fairly and equally.”

Baffert, who sued the racing board in October along with the owners and jockeys of both Justify and Hopportunity, had no immediate comment on the board’s decision.

Baffert also is contesting two drug positives involving his horses in Arkansas. In that instance, racing authorities said Arkansas Derby winner Charlatan and Gamine both tested positive for lidocaine, a local anesthetic that has a variety of uses in equine medicine.