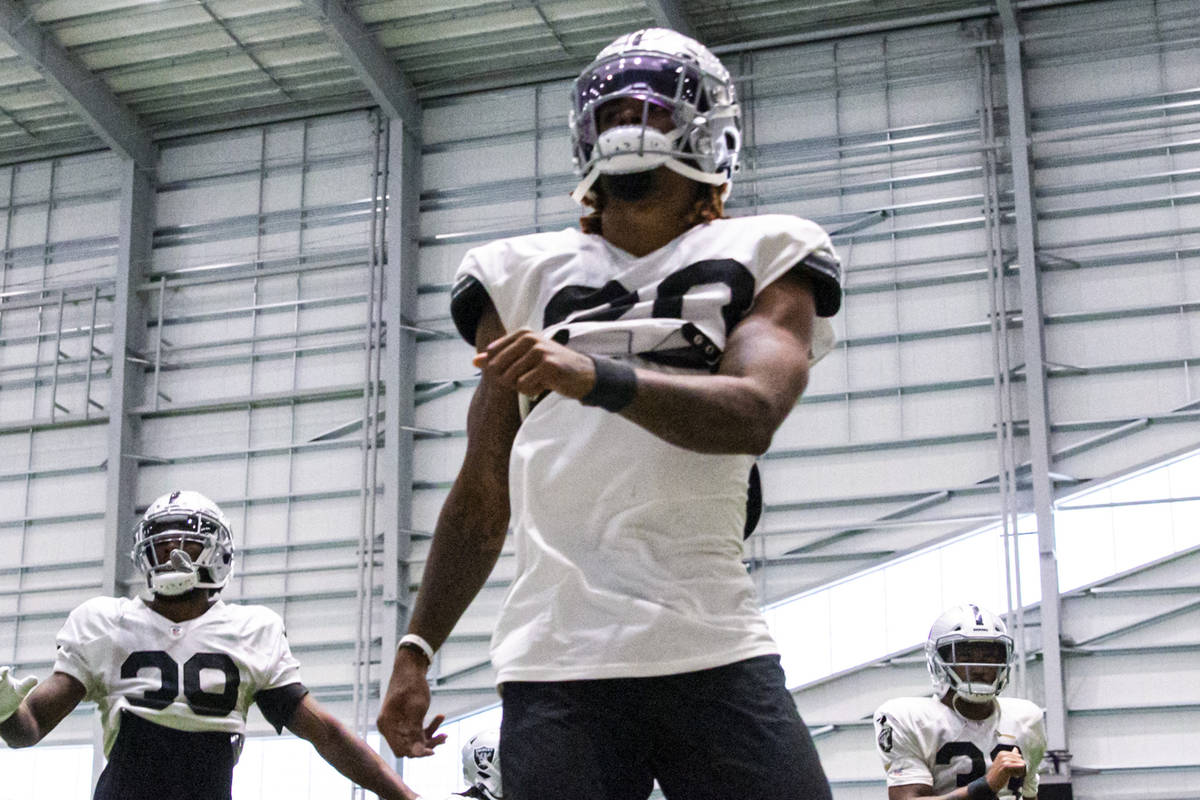 Damon Arnette stepped away from a podium when addressing the media at Raiders training camp Thursday. He smiled and flexed.

He has been busy adding weight to a barbell, curling dumbbells through set after set, back-squatting his way to a body more prepared for the violent collisions of an NFL Sunday.

Resistance bands have been replaced with iron plates. Caution with confidence.

Arnette is bigger and stronger and healthier. The second-year cornerback also needs to be a whole lot better.

A broken and then dislocated thumb. Surgery. COVID-19. Two concussions. Playing while wearing a cast.

Arnette struggled mightily on the field but was a star on the team’s weekly injury report.

The Raiders took him 19th overall in the 2020 draft out of Ohio State. It was a pick that drew the rolling eyes and critical evaluations that have become commonplace with first-round selections made by general manager Mike Mayock and head coach Jon Gruden.

Most viewed it a reach. Don’t they always?

For the Raiders, it better mean Arnette is capable of disproving those draft-day doubters.

He played in just nine games last season, started seven, didn’t offer much statistically and is now second string on a depth chart while looking up at veteran Casey Hayward.

Every defensive position needed improvement. Cornerback was hardly immune, a major reason the team signed a two-time Pro Bowler in Hayward to start opposite Trayvon Mullen.

Hayward can be more than just a mentor for Arnette. Having played four seasons under new Raiders defensive coordinator Gus Bradley when with the Chargers, Hayward knows better than anyone how best to succeed in what will be a heavy zone scheme. Herein lies a major unknown with Arnette, who must develop a skill set beyond that of a press-man corner.

He managed just 25 tackles (21 solo) last season, allowing a way-too-generous passer rating of 107 without grabbing a single interception. Now, how Arnette performs in a defense which demands cornerbacks drop into deep coverage should determine how much opportunity really exists for him.

“I think he’s done very well (in camp),” said Hayward, in his 10th NFL season. “I wasn’t here last year, so I can only tell you what I see now. … He’s one of those guys that’s got all the tools to be really good, and I think he’s been flashing those tools. I hope he continues to do that, because we’re going to need him.”

Arnette said he never played above 175 pounds as a rookie. That comes with a lack of iron in your bench press. He is listed at 195 now and yet understands that not every hit needs to make a highlight reel to be effective.

When you count a final season at Ohio State, he is also about to play in a third different defensive scheme over so many years. Staying healthy is a good start. You don’t survive in this league solely by way of the resistance band.

“Last year my mentality was tested in a lot of areas of my life — I didn’t do a good job handling them,” Arnette said. “But the support of coaches, my teammates, my family … If it weren’t for them, I wouldn’t have been able to get through things I was dealing with.

“Once I started learning to lean on my support, that’s when I started to see growth.”

That, and when he was again able to throw plates on a bar.