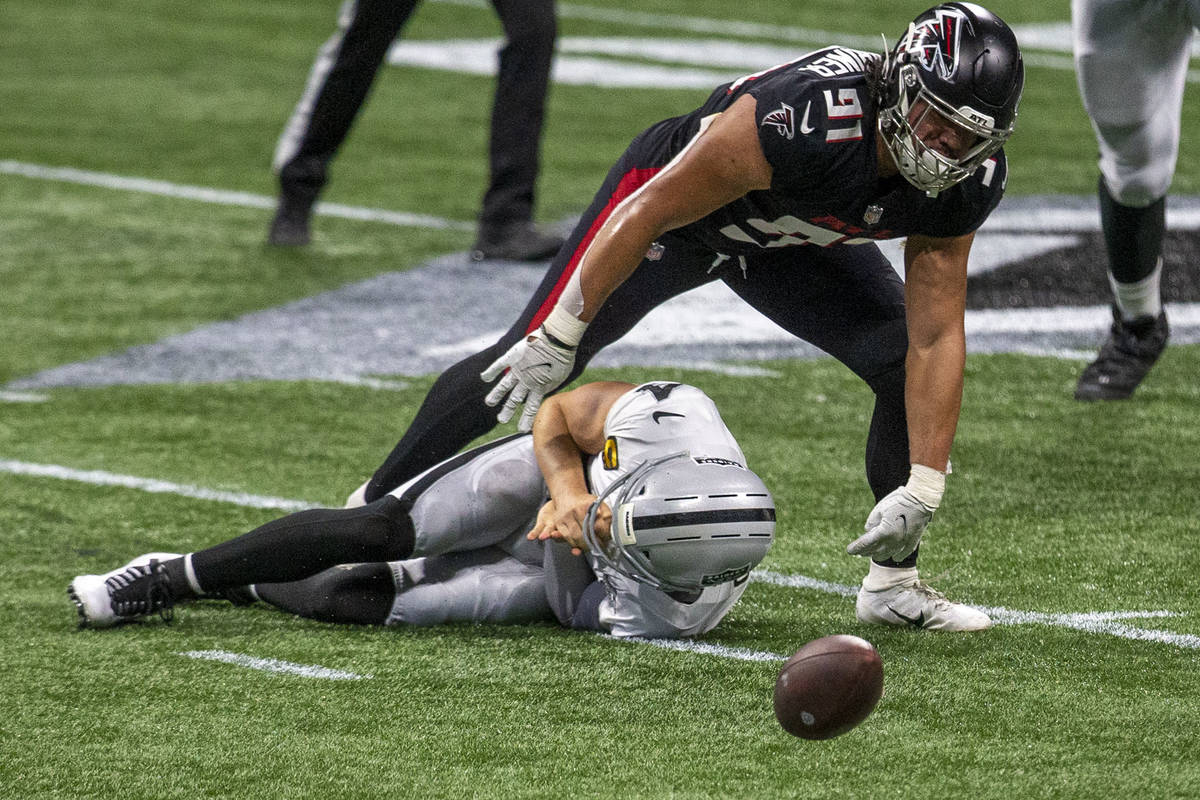 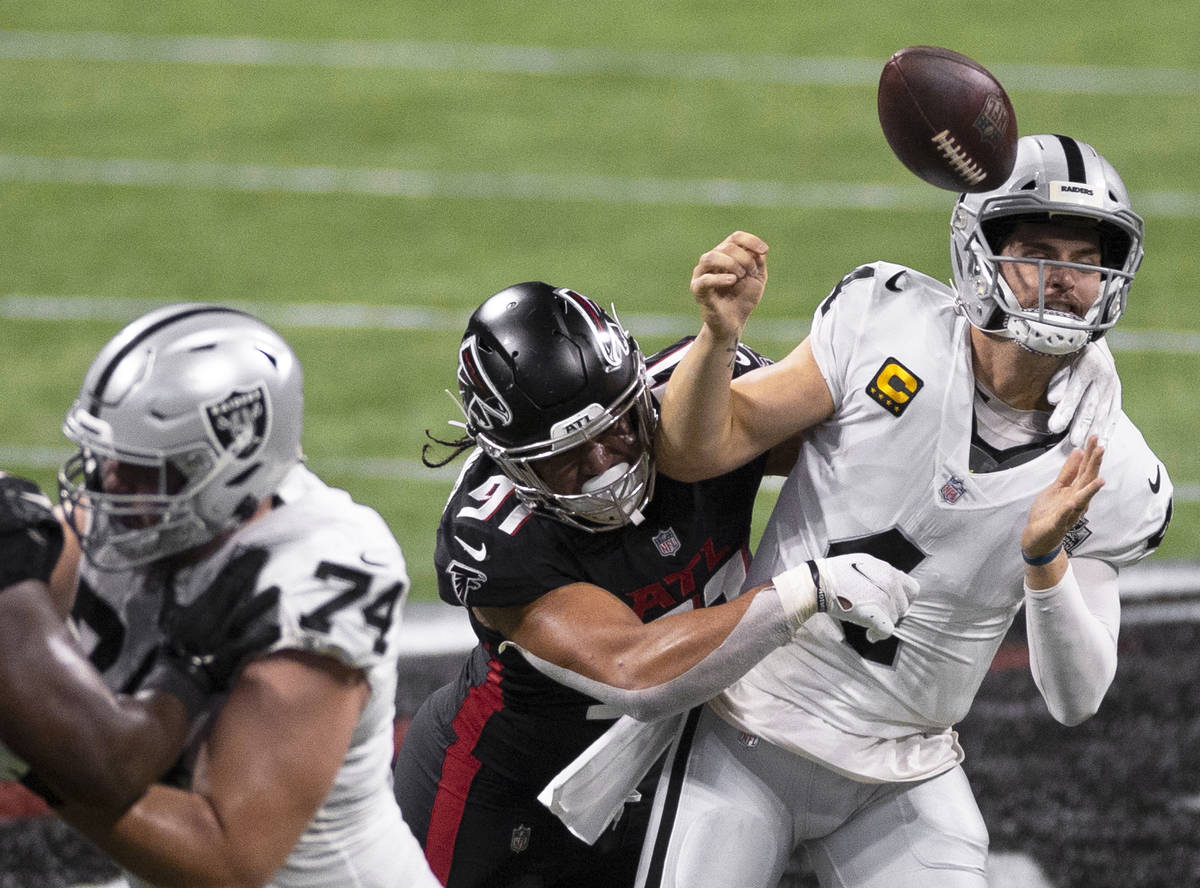 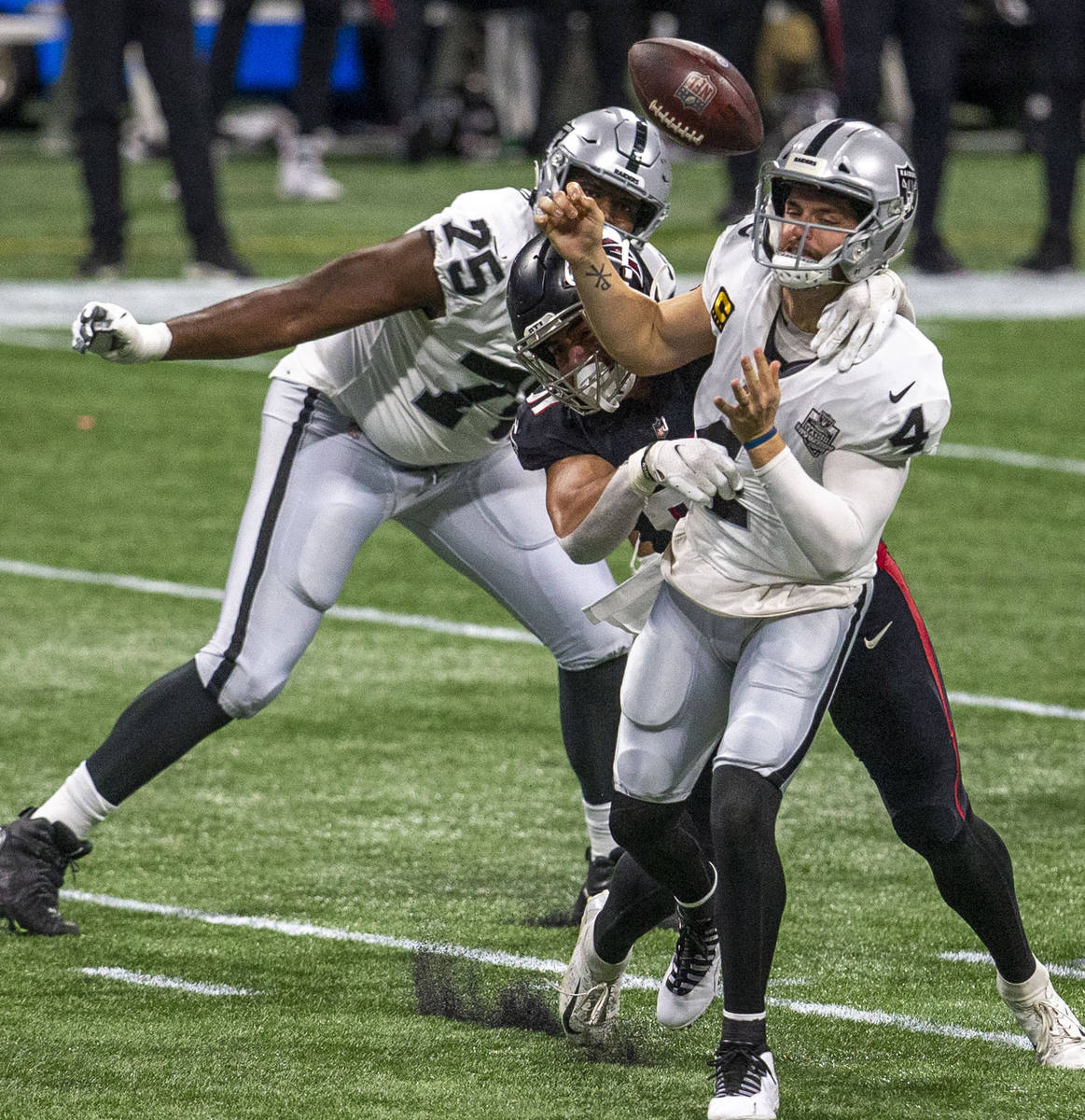 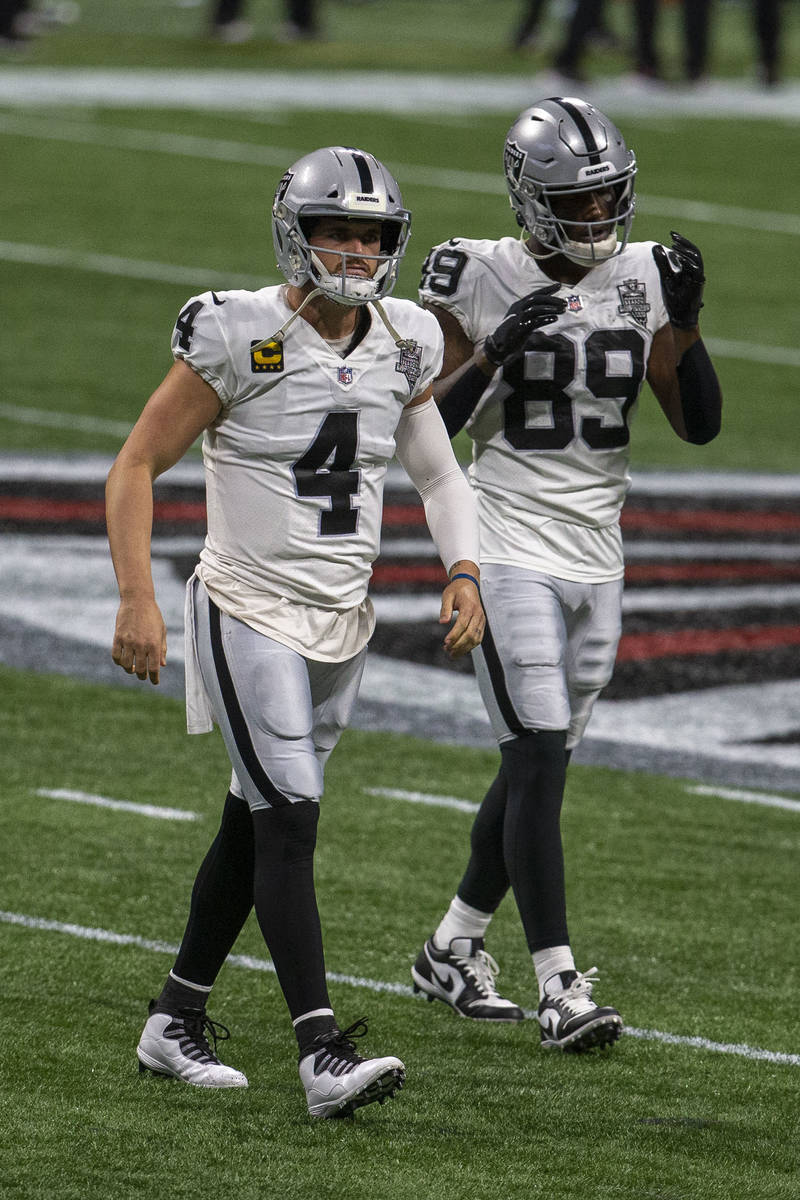 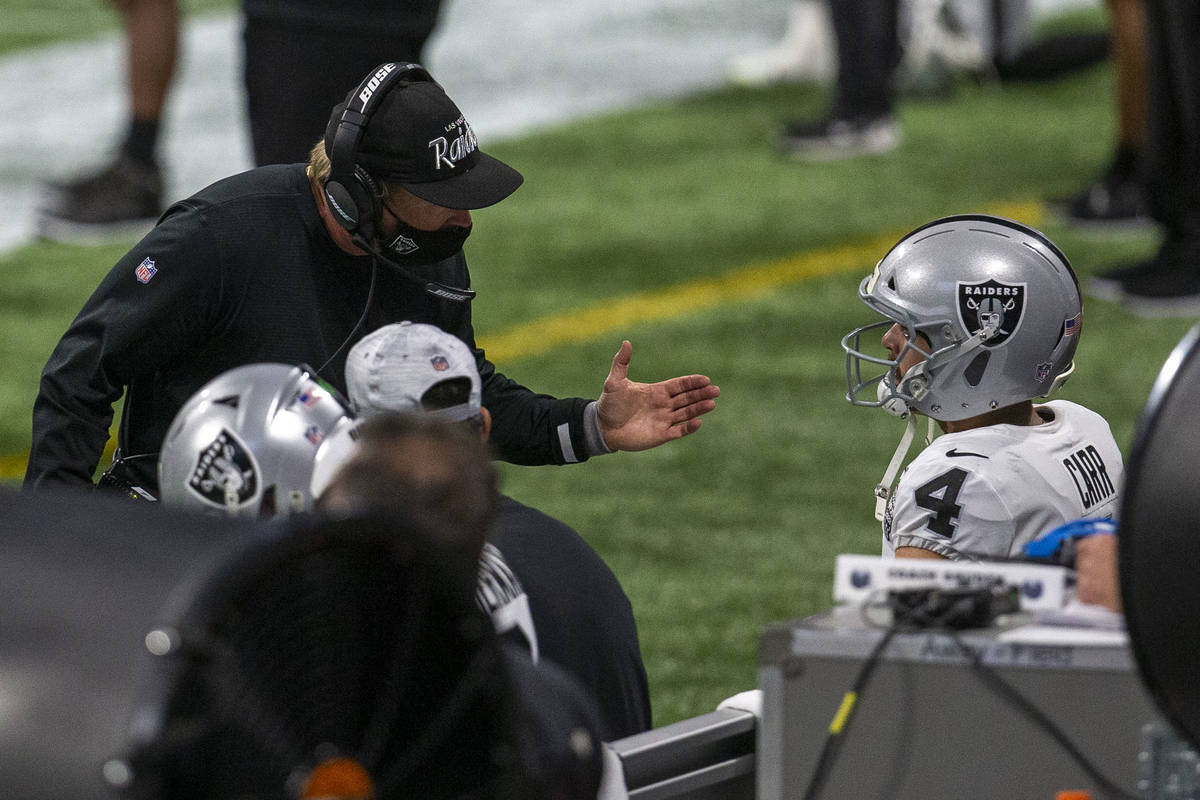 Las Vegas Raiders head coach Jon Gruden speaks to quarterback Derek Carr (4) on the sideline after he fumbled the football and the Atlanta Falcons recovered during the second quarter of an NFL football game on Sunday, Nov. 29, 2020, at Mercedes Benz Stadium in Atlanta. (Heidi Fang/Las Vegas Review-Journal) @Heidi Fang 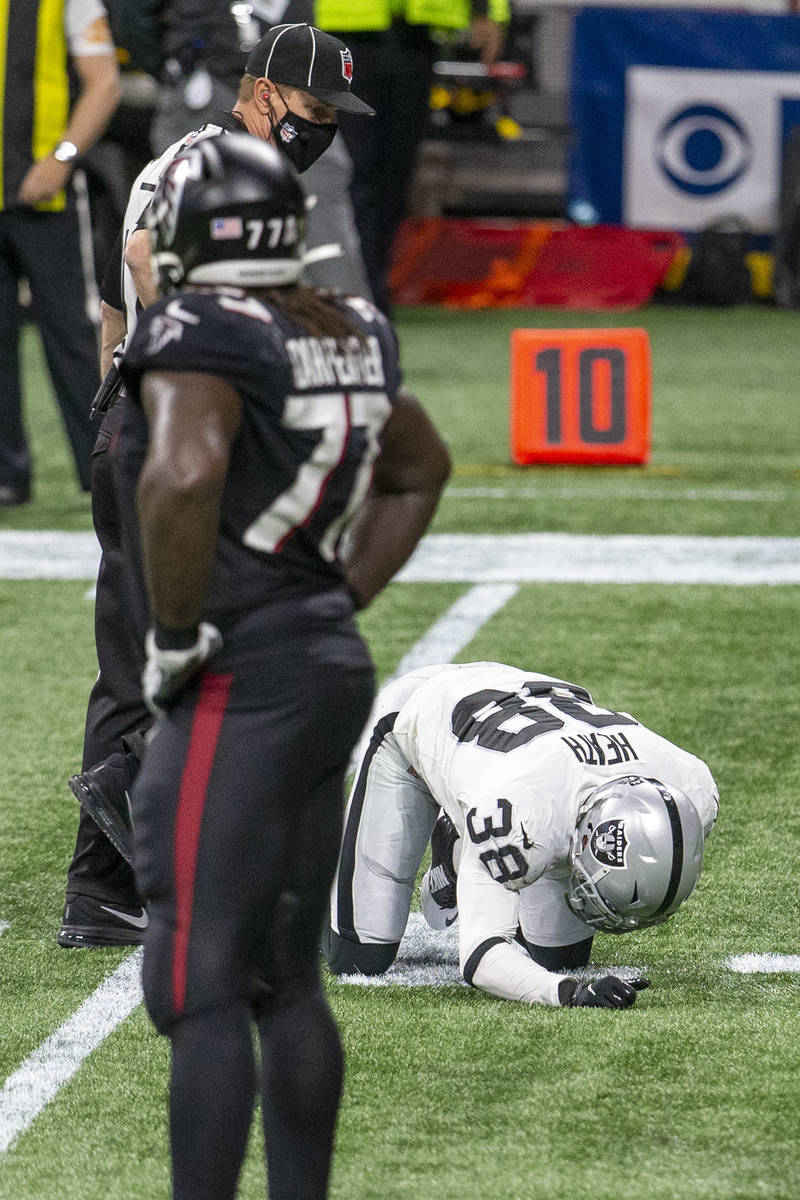 Las Vegas Raiders strong safety Jeff Heath (38) remains on the field after being injured on a play as Atlanta Falcons offensive guard James Carpenter (77) looks on during the second quarter of an NFL football game on Sunday, Nov. 29, 2020, at Mercedes Benz Stadium in Atlanta. (Heidi Fang/Las Vegas Review-Journal) @Heidi Fang 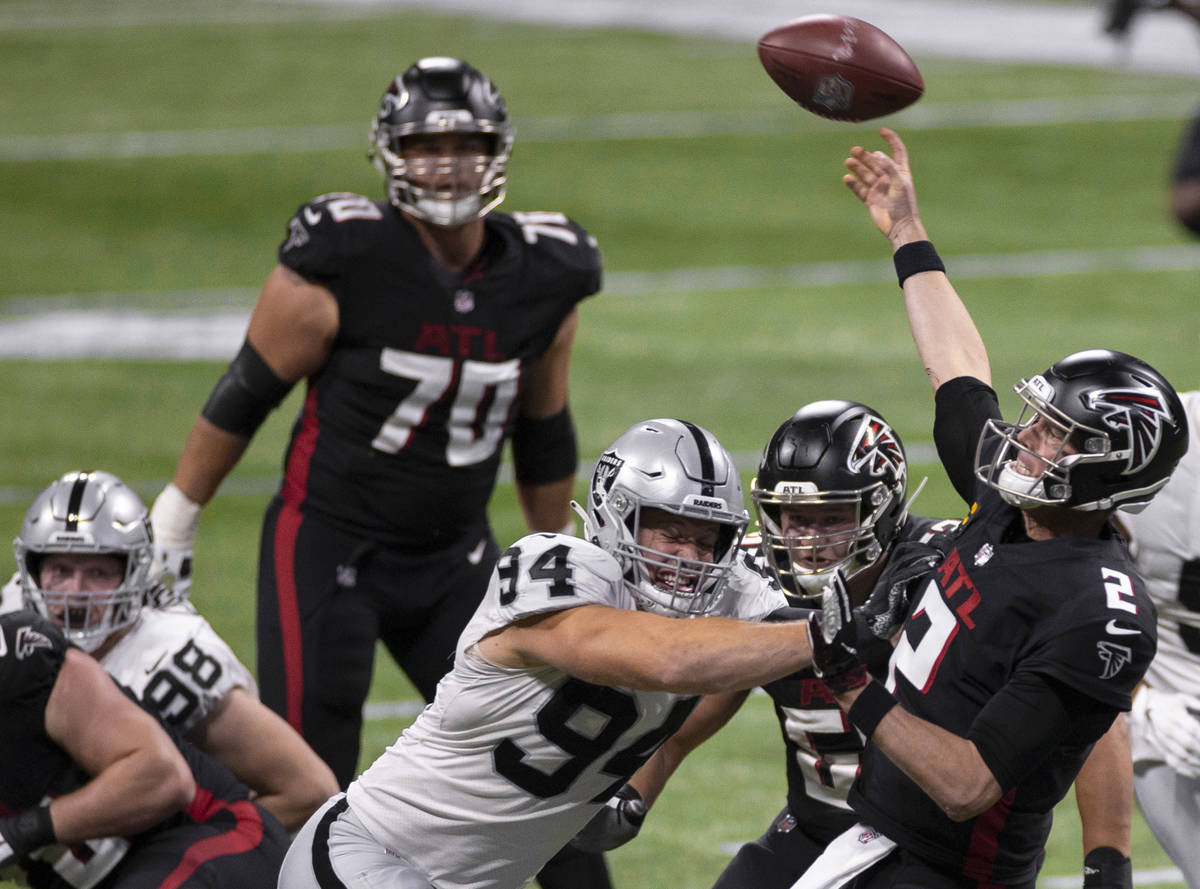 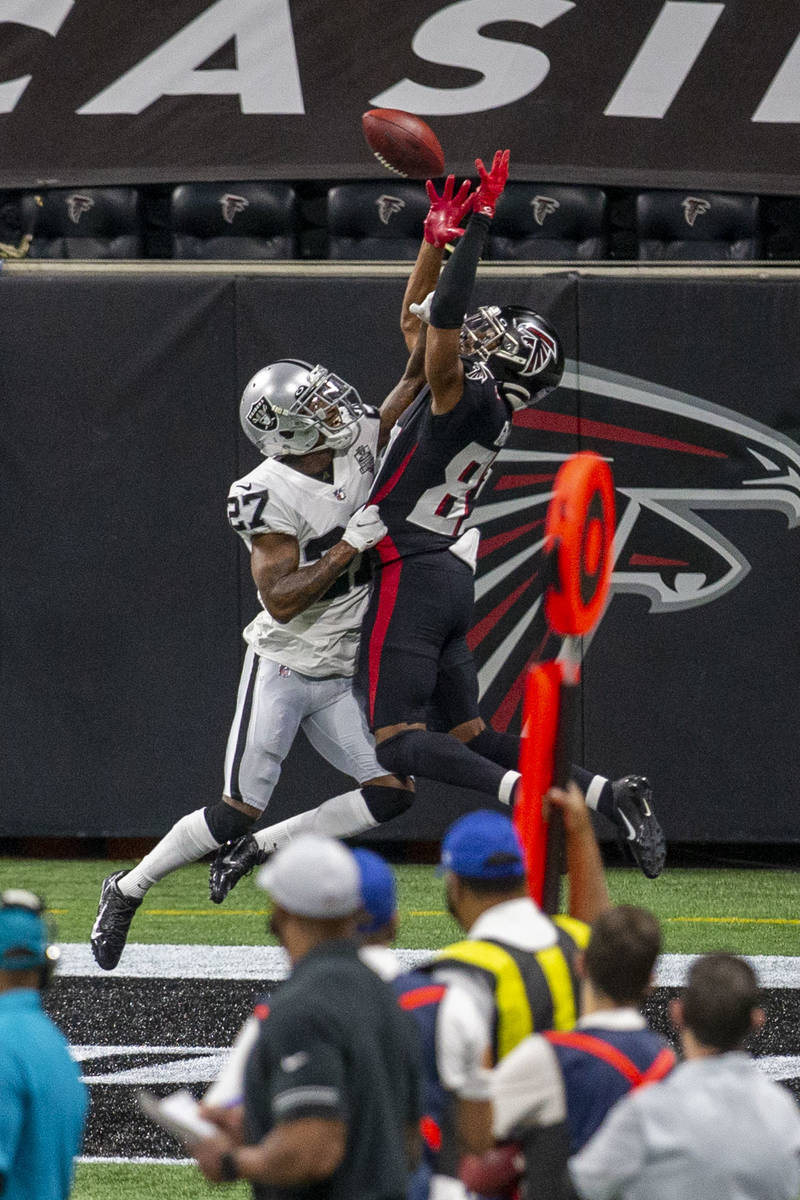 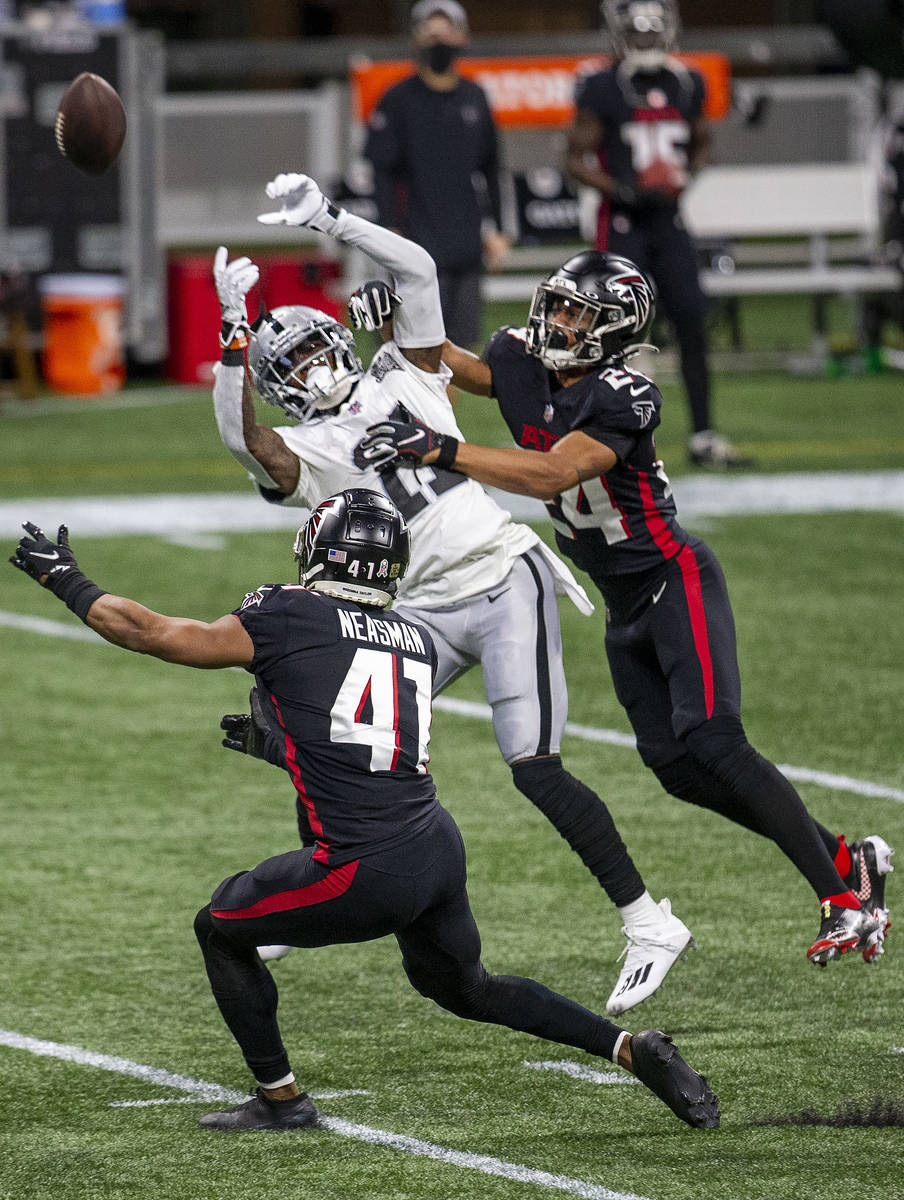 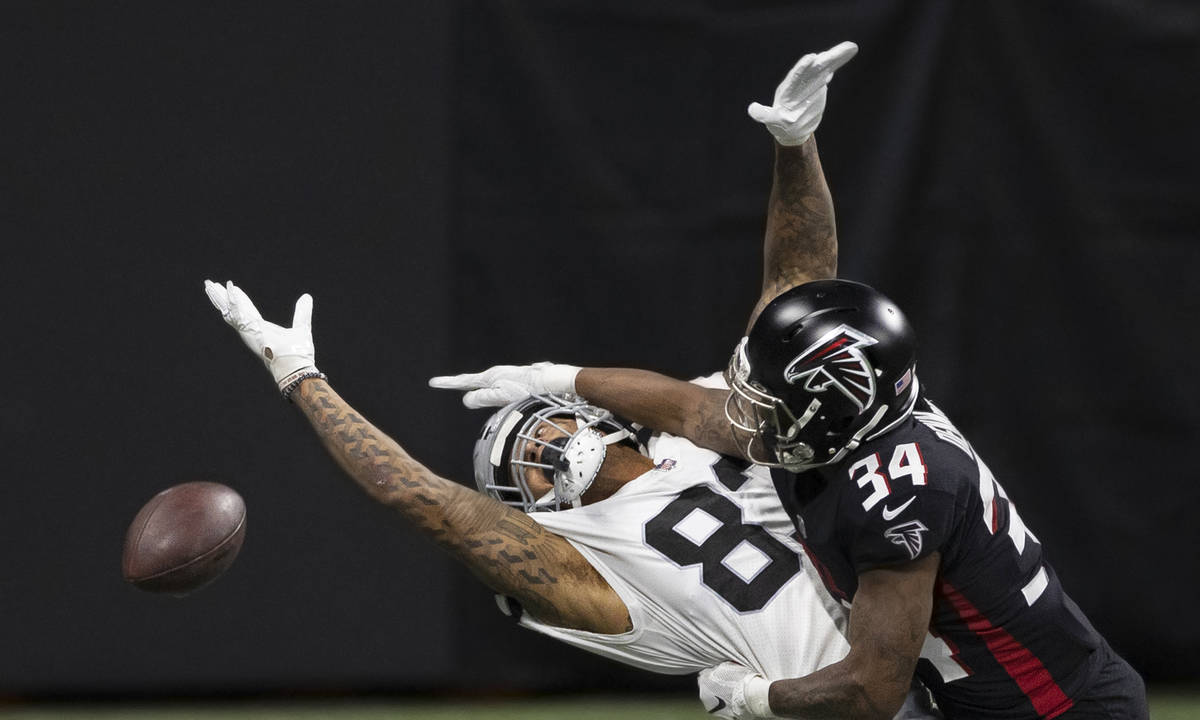 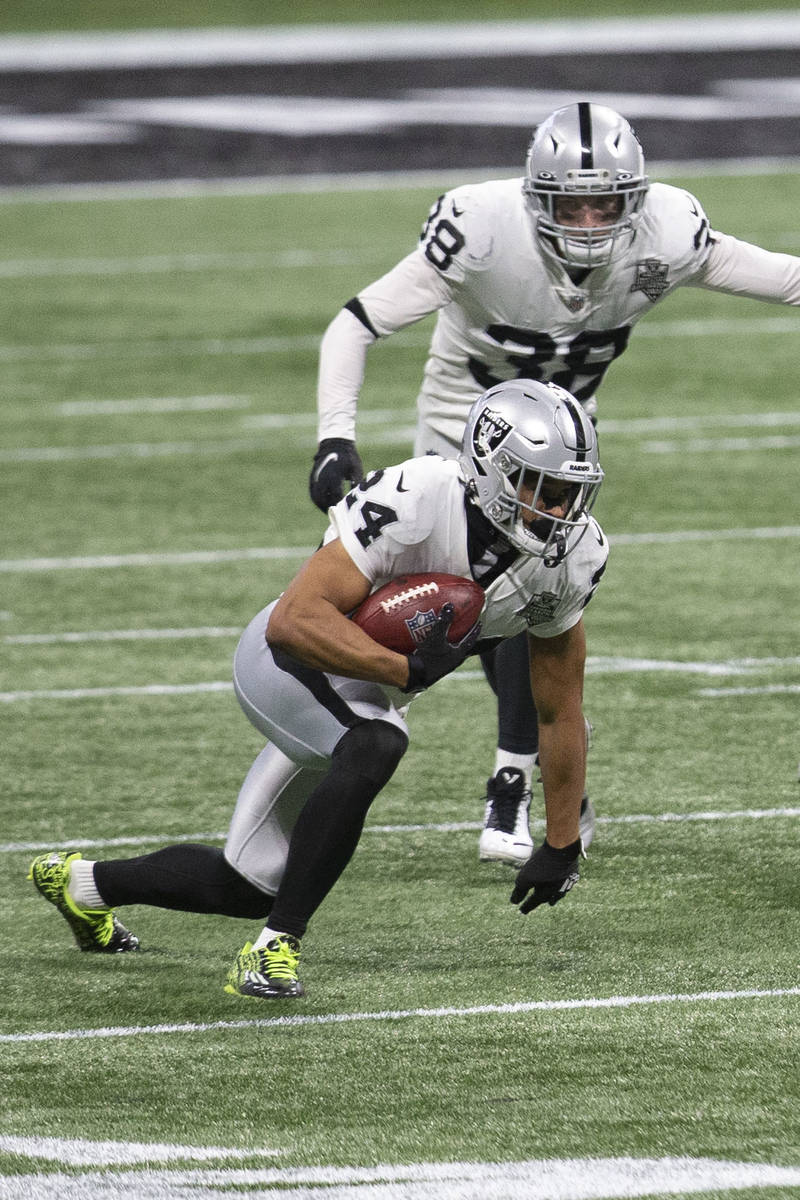 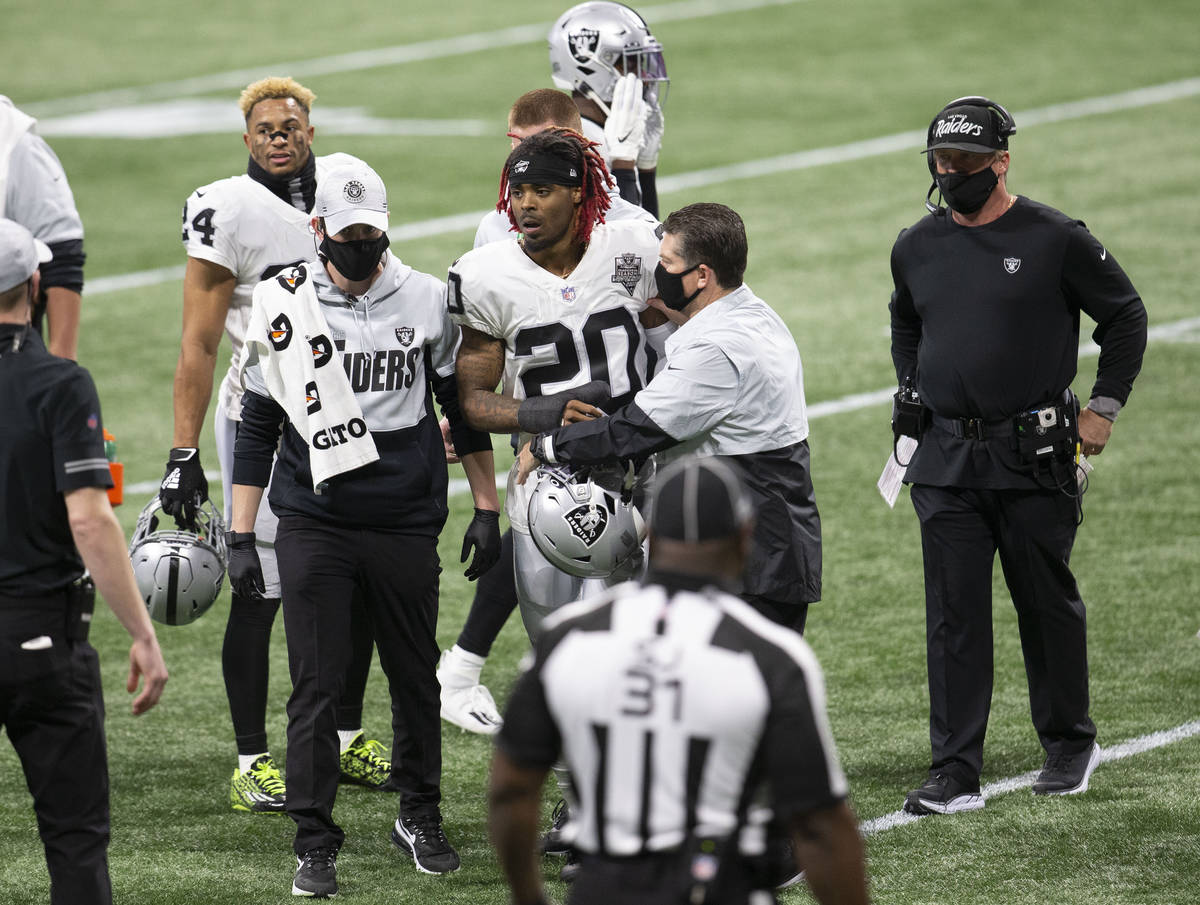 Las Vegas Raiders cornerback Damon Arnette (20) is helped off the field by trainers after being hurt as head coach Jon Gruden, right, looks on during the first quarter of an NFL football game on Sunday, Nov. 29, 2020, at Mercedes Benz Stadium in Atlanta. (Heidi Fang/Las Vegas Review-Journal) @Heidi Fang 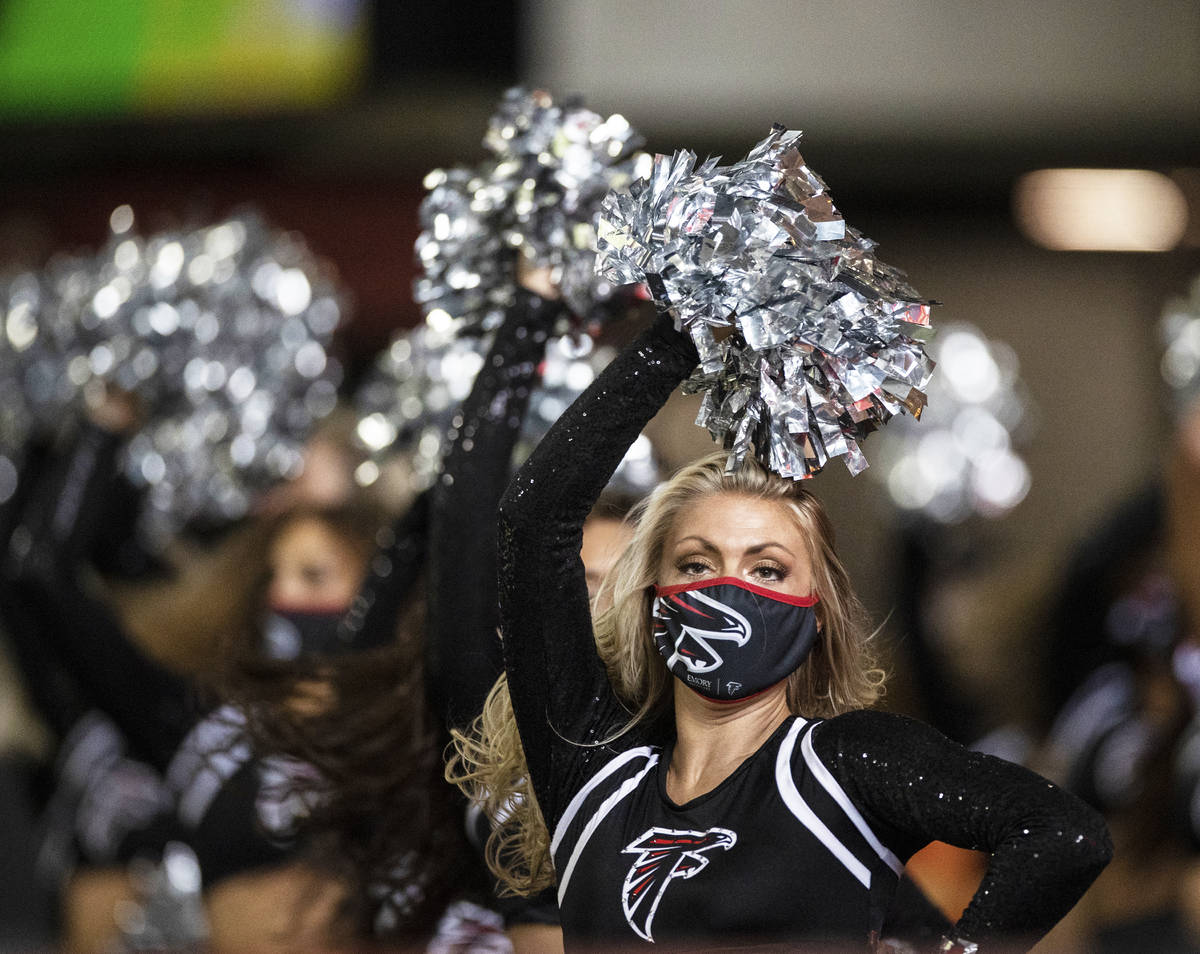 The Atlanta Falcons cheerleaders perform before the start of an NFL football game against the Las Vegas Raiders on Sunday, Nov. 29, 2020, at Mercedes-Benz Stadium, in Atlanta, Ga. (Benjamin Hager/Las Vegas Review-Journal) @benjaminhphoto

ATLANTA — It would be different if the Raiders didn’t go through the exact same thing, under the exact same circumstances at the exact same moment last season. But they did. And that makes their refusal to heed the lesson that much more inexcusable and the resulting 43-6 loss to the lowly Atlanta Falcons on Sunday so indefensible.

After spending an entire week explaining to anyone who would listen why this year’s version of the Raiders is so much different than last year’s, they inexplicably reverted back to their 2019 selves in a stunning loss that pushes them to the outside edge of the playoffs.

“Very frustrating” is how Raiders quarterback Derek Carr put it.

The woeful performance offered an uncanny resemblance to the egg they laid last year in a 34-3 loss to the New York Jets. The Raiders entered both games 6-4 with playoff aspirations, only to get blown out each time.

The loss to an inferior Jets team started a season-ending 1-5 slide that blew the Raiders’ playoff hopes to smithereens. Only time will tell if this is the precursor to a similar late-season swoon or the wake-up call that shocks the Raiders (6-5) back to form.

But with so much to unpack from a crushing loss in which they committed five turnovers and 11 penalties for 141 yards and rushed for a measly 40 yards while converting just 3 of 12 third downs, they have their work cut out getting everything fixed.

That will be all the more challenging with cornerback Damon Arnette leaving the game with a concussion and Josh Jacobs suffering a fourth-quarter leg injury that sidelined him the remainder of the game.

The loss came off a week of preparation that Carr said fell far below what they are accustomed to this year. “Our week of practice was not up to the standard that we have set,” he said.

Up next is another cross-country trip to play the Jets, ironically enough, in what is expected to be the kind of blustery Northeast weather conditions that historically get the best of the Raiders. It will take all of their resolve to make sure Sunday’s misstep against the Falcons was a one-time stumble rather than a sign of things to come.

“It would be one thing if I was scared because I didn’t know the type of people we have in our room, whether they’d fold or get tough,” wide receiver Hunter Renfrow said. “But I really feel we’ve got a good group of guys. We just gotta finish better than we did last year.”

Of immediate concern is figuring out what exactly happened on Sunday.

From beginning to end, it was the Falcons who imposed their will, dictated terms and played with purpose and focus. In other words, it was Atlanta playing like the team fighting for a playoff berth.

The Raiders’ response, such as it was, was in complete contrast. They were listless offensively from the outset, unable to set the tone upfront while allowing the Falcons to stonewall their run game and create pocket havoc around Carr. That led to a slew of rushed throws, three fumbles and a pick-six interception return for a touchdown.

Worse, when the Raiders were stuffed on a fourth-down run at their own 45-yard-line, setting up a Falcons field goal to make it 3-0, and then fumbled on their next offensive play from scrimmage to set up another Falcons field goal to fall behind 6-0, the resolve they showed from that point forward was profoundly lacking.

“We’ve gotta get up off the mat and fight back better,” Raiders head coach Jon Gruden. “The coaching staff and as a football team, that’s something you gotta take a look at. It’s a reflection of me. And I apologize to Raiders fans.”

Just as disturbing was the constant barrage of penalties covering almost every corner of the rule book. Almost all of them cost the Raiders dearly.

A holding call on Kolton Miller and a hands-to-the-face penalty on Brandon Parker turned a second-goal from the Atlanta 3 to second-and-goal from the 23. The Raiders never recovered and had to settle for a 29-yard Daniel Carlson field goal rather than a touchdown.

Then, in the second quarter with the Raiders trailing 6-3, Falcons kicker Younghoe Koo was wide right on a 40-yard field goal. Only reserve safety Dallin Leavitt rolled into Koo and got called for roughing the kicker. With a new set of downs, the Falcons ended up scoring a touchdown to go up 13-3.

Meanwhile, Maliek Collins was flagged for roughing the passer late in the first half to help set up Koo’s 30-yard field goal to put the Falcons up 16-3. Later, Isaiah Johnson was called for pass interference and Maxx Crosby was guilty of roughing the passer on the Falcons’ third-quarter touchdown drive to go up 30-6.

“You fall behind in the down and distance. You give teams free shots,” Gruden said of the price the Raiders paid. “It’s a recipe for disaster, and that was what you saw today.”

The key now is making sure it’s just a one-time thing. 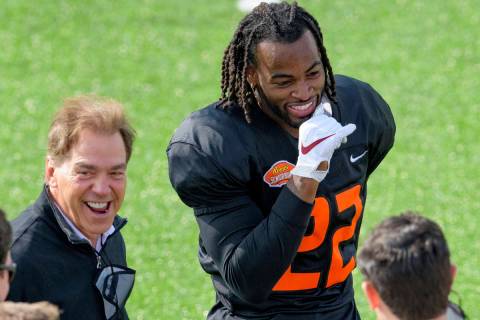 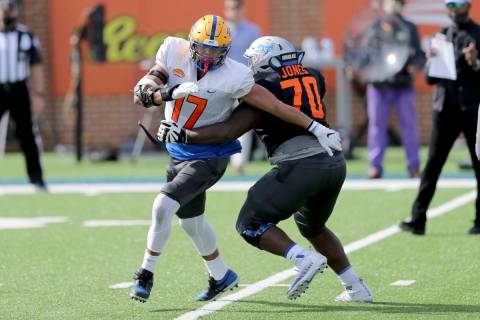 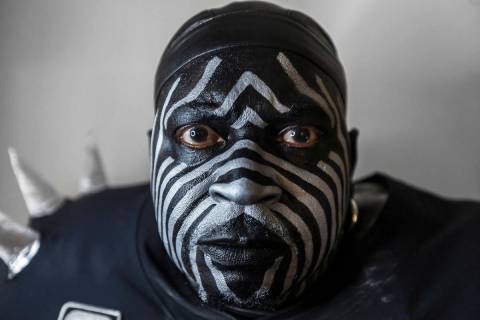 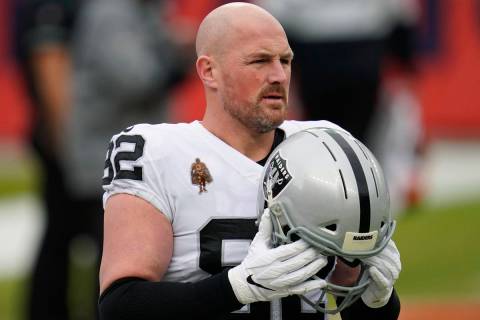 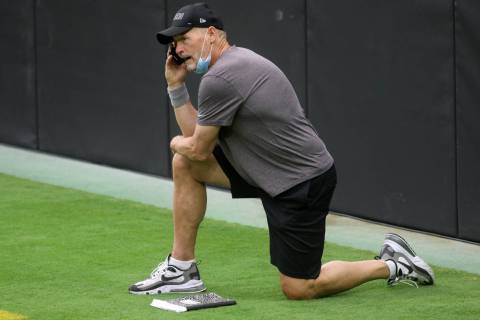 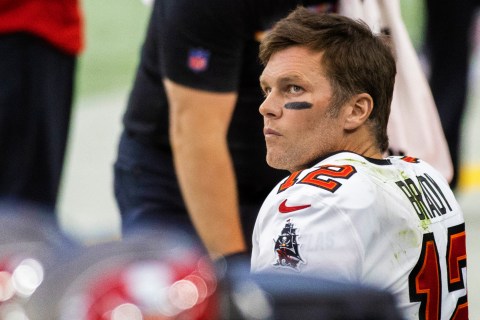 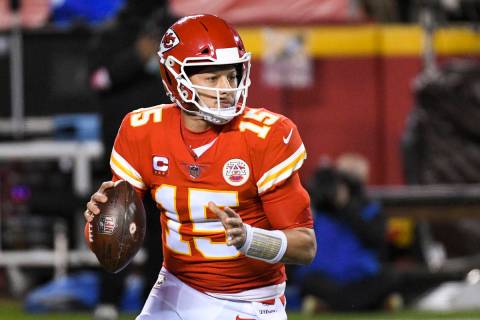 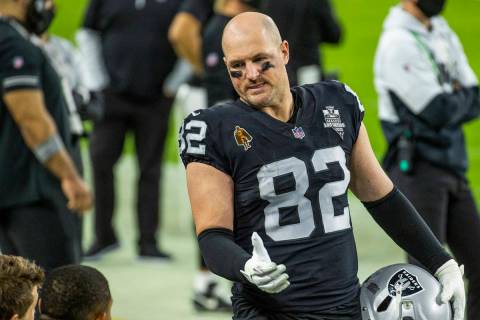 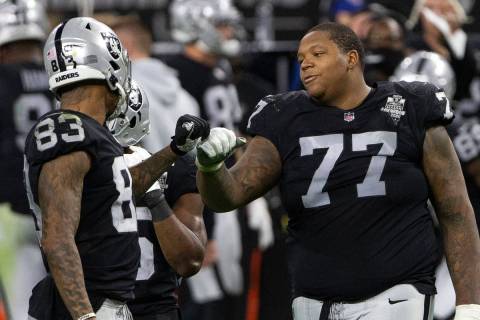 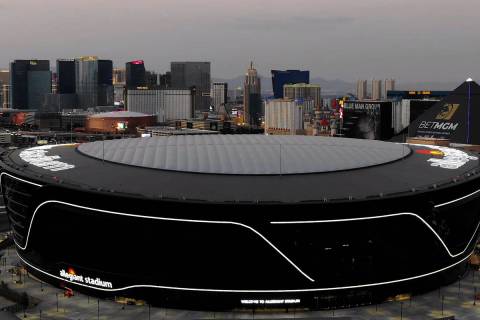