How’s this for a bizarre: The turnout for today’s truncated Steve Ross recall election could exceed the ballot total of the 2009 vote that kept him on the Las Vegas City Council.

So far, through two days of early voting, 2,914 people have cast ballots to either retain Ross or replace him with Planning Commissioner Byron Goynes. In the 2009 primary, 4,333 people came to the polls in Ward 6, in an election which Ross won outright with 54 percent of the vote.

Back in 2005, 4,708 people voted in the primary (which also featured Goynes on the ballot, by the way). In the general election that year, 6,270 people voted, with Ross eking out a victory at 51 percent.

Bigger numbers in this year’s recall are generally considered a good sign for Ross, although the Goynes campaign points out that there are committed activists on both sides.

In fact, if Ross scores a decisive victory today, the recall that has dogged him for months could have a silver lining, sending a message to anybody considering a challenge in 2013 that voters have vetted the accusations against him and found him not wanting.

Those accusations? Ross promised in 2009 that, should he be re-elected, he would not take a salary increase scheduled to go into effect. (He did accept the raise, but he eschewed a much smaller cost-of-living adjustment.)

Ross sought the permission of the state Ethics Commission to seek an elected union job that presented potential conflicts with his elected duties. Commission members cautioned him, but Ross cast a vote on building a new City Hall that the commission later found violated state ethics laws. (The violation was not considered “willful” — and thus Ross avoided a fine — because the city attorney advised him he could vote.)

And then there are the zoning disputes, traffic problems, constituents who feel Ross isn’t listening to them, and closed businesses.

In fact, it was one closed business in particular that led to the recall being on the ballot in the first place.

Car dealer Joe Scala claimed Ross refused to give him a zoning waiver to allow his high-end used car dealership to operate in a northwest auto mall where rules required a franchise agreement with a national car company. Scala underwrote the recall organizing, and Ross blames his predicament on a “used car dealer” seeking revenge.

Goynes, for his part, was in the right place at the right time. He was planning to challenge Ross in 2013, and he had the campaign infrastructure ready to go when the recall gathered enough signatures to trigger a ballot.

But Goynes’ campaign has been underfunded from the start. Goynes reported this month raising $9,000 for the short race, while incumbent Ross posted $106,440. Total spending will be more, and Ross has used his money to blanket the ward with mailers touting his accomplishments and endorsements from Mayors Oscar and Carolyn Goodman.

“It wouldn’t surprise me if there was a huge surge on both sides,” said Steve Forsythe, campaign manager for Goynes. “People on the recall side are very passionate about going out and making a change.”

It will take a very large surge by Goynes’ supporters to overcome Ross’ incumbency, money and a general rule that recalls rarely succeed. Voters are being asked to undo the 2009 election, a tall bar that can be cleared only by showing significant wrongdoing by an elected official. It’s an open question whether Ross’ sins will qualify.

One thing is sure: If he survives today, Ross will gain something that’s eluded him since the recall began: A little peace. 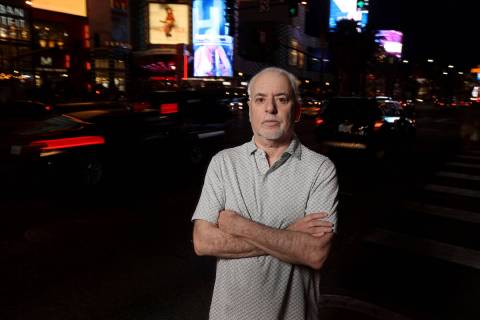