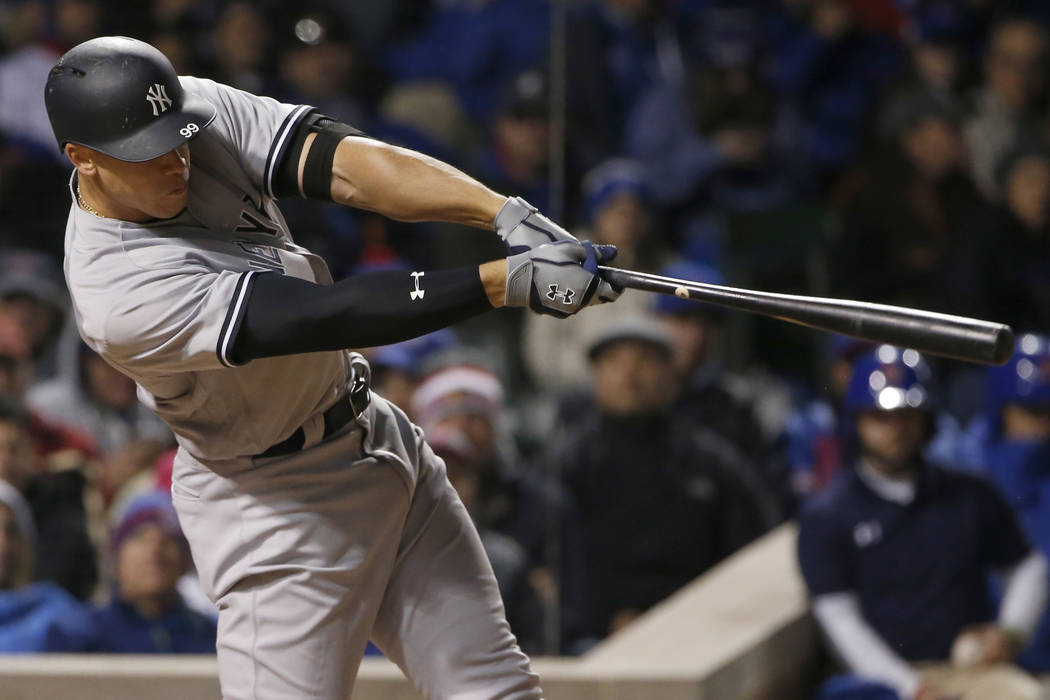 New York Yankees' Aaron Judge hits a RBI-triple against the Chicago Cubs during the seventh inning of a baseball game Sunday, May 7, 2017 in Chicago. (AP Photo/Nam Y. Huh) 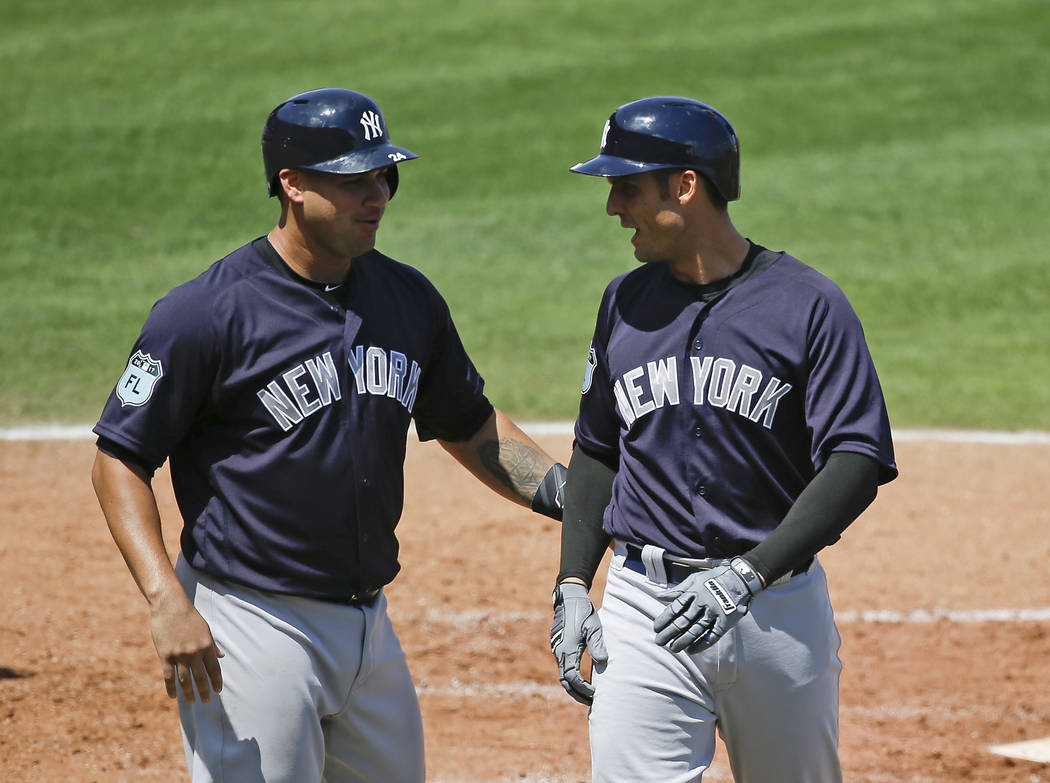 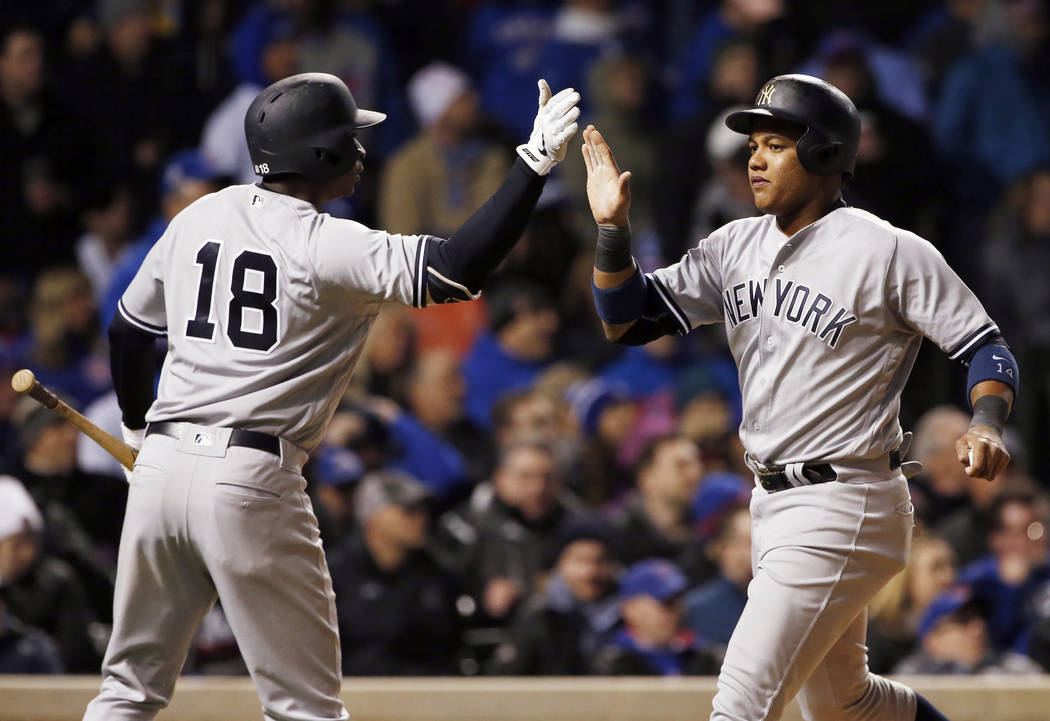 New York Yankees' Starlin Castro, right, celebrates with Didi Gregorius after scoring on a triple by Aaron Judge during the seventh inning of a baseball game against the Chicago Cubs, Sunday, May 7, 2017 in Chicago. (AP Photo/Nam Y. Huh)

Besides former 51s slugger Eric Thames, who already has bashed 13 home runs for the Brewers after coming straight out of South Korea, the biggest surprises in baseball this season have been the Yankees, Giants and Rockies.

While New York and Colorado have each exceeded expectations, San Francisco has been baseball’s biggest disappointment, entering Thursday with the majors’ worst record at 12-23.

The Yankees (21-10) entered Thursday’s series opener against the Astros (23-11) in a virtual tie for baseball’s best record with Houston and the Orioles (22-11), another surprising team.

The Baby Bombers were expected to be led by Greg Bird and Gary Sanchez, who hit 20 home runs in 53 games last season. But instead it’s been Aaron Judge, New York’s 6-foot-7-inch, 282-pound rookie right fielder, hammerin’ homers like Hank Aaron. Judge leads the American League in home runs with 13 and is tied for the major league lead with Thames and Ryan Zimmerman.

“I follow the Yankees closely because I grew up in New Jersey,” Boyd Gaming sports book director Bob Scucci said. “When I saw the lineup this year, I thought it would be better than the last couple years, but I had no idea they’d be as strong as they are.

“Sanchez and Bird are the young guys they’re expecting superstardom from, but Sanchez has been on the (disabled list) and Bird hasn’t been doing much. They’re getting a lot of production from the other guys.”

Starlin Castro is fourth in the AL in hitting (.354), Aaron Hicks is batting .338, Didi Gregorius .317 and veterans Matt Holliday, Jacoby Ellsbury and others have contributed to an offense that is second in the majors in runs per game (5.81), third in homers (52) and fourth in batting (.273).

Handicapper Micah Roberts (Sportsline.com) isn’t surprised. He predicted before the season that the Yankees would surpass their win total of 83 and advance to the World Series against the Dodgers.

“I guess the one thing that’s surprised me is their starting rotation has held up a lot better than I expected,” Roberts said of a group led by Michael Pineda (3.12 ERA) and Luis Severino (3.40). “I still expect them to be competitive through June and go out and get themselves a good setup man, middle relief and quality starter and make a run for the World Series.”

The Yankees, who recently swept the Cubs at Wrigley Field and are fourth in the majors in ERA (3.58), are able to shorten games with setup man Dellin Betances and closer Aroldis Chapman.

The National League West-leading Rockies (22-13) landed a lights-out closer in Greg Holland, who leads the majors in saves with 14 (in 14 attempts) and has a 1.20 ERA. Colorado also has benefited from stellar starting pitching from youngsters Antonio Senzatela (5-1, 2.86 ERA) and Kyle Freeland (2.93 ERA).

“The thing that has set them apart is the pitching,” said Roberts, a Colorado native. “They’ve always hit well, but their starting pitching has been great and they have a lockdown closer, which they’ve never had at a place like Coors (Field).”

The Giants have seen their odds skyrocket from 14-1 to win the World Series to 100-1 after a disastrous start marked by ace Madison Bumgarner’s trip to the disabled list after a dirt-bike accident. But San Francisco, which had a win total of 88, has been on a slide since last season. After entering the 2016 All-Star break with a majors-best 57-33 record, the Giants have gone 42-65. They’re last in the majors in homers (23), 27th in hitting (.227) and 28th in ERA (4.81).

“It’s not just Bumgarner. They were losing with him in there,” Roberts said. “The offense is just so bad. The pitching’s been bad. Everything’s been bad. It’s so rare to see that out of this team.

“They don’t have that look anymore to me. It’s a different vibe around the Giants.”

“Just because the Royals can’t hit,” he said. “They average 2.9 runs a game, and (Baltimore starter) Chris Tillman was fantastic in his first start back.”

I’m going with the Wizards (minus-5) over the Celtics. The home team has not only won and covered all five games in their playoff series but also in all nine meetings this season. Washington won Games 3 and 4 at home by an average of 23 points.