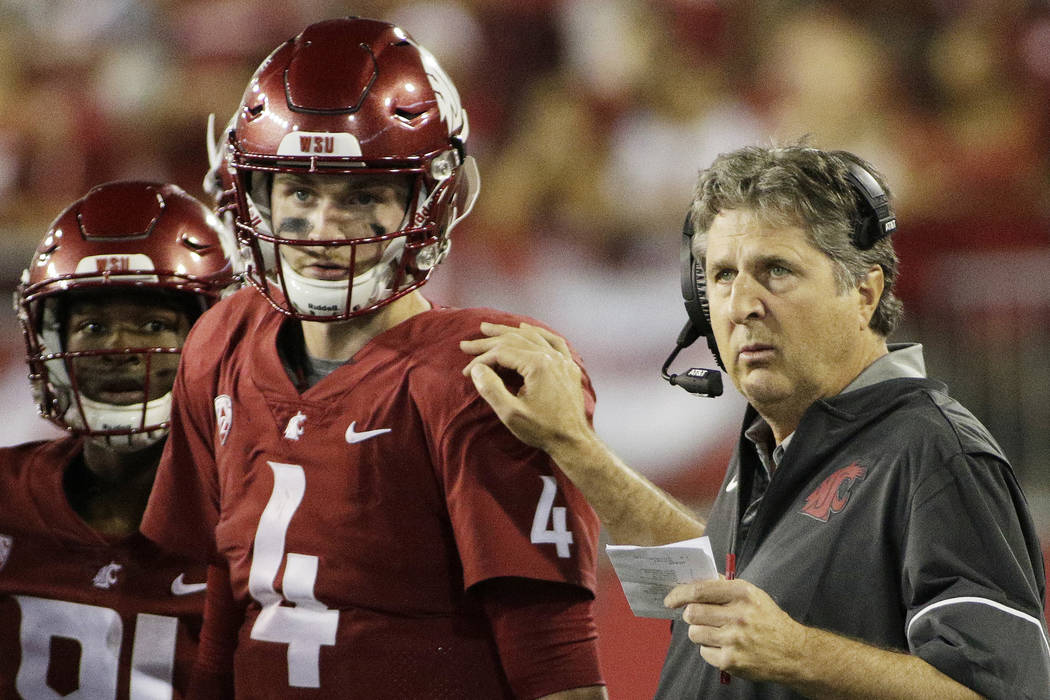 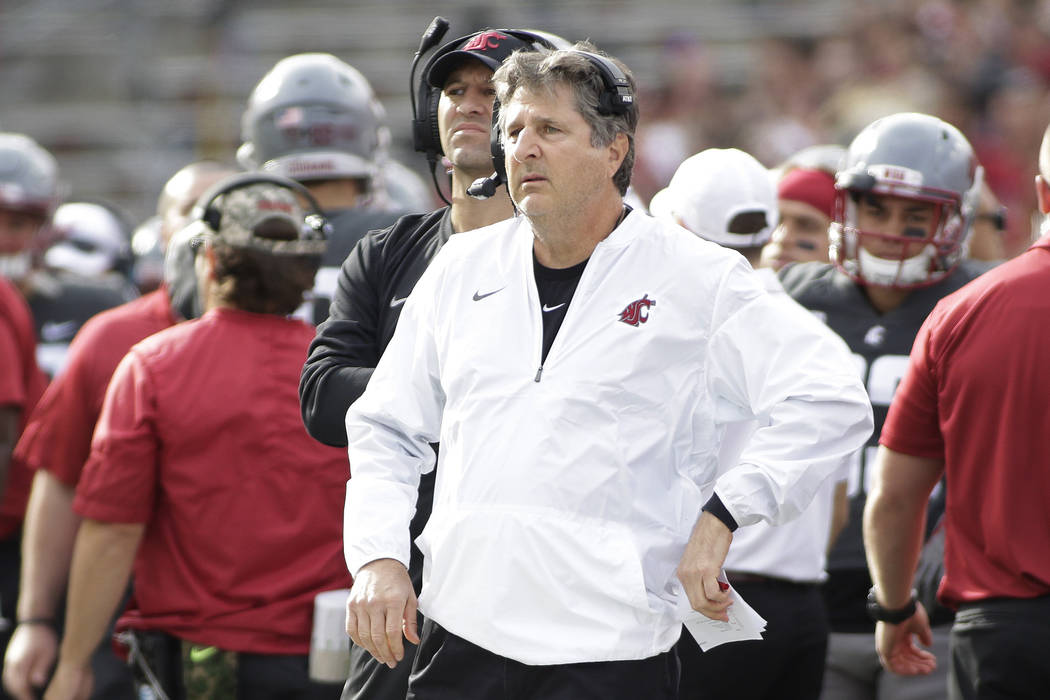 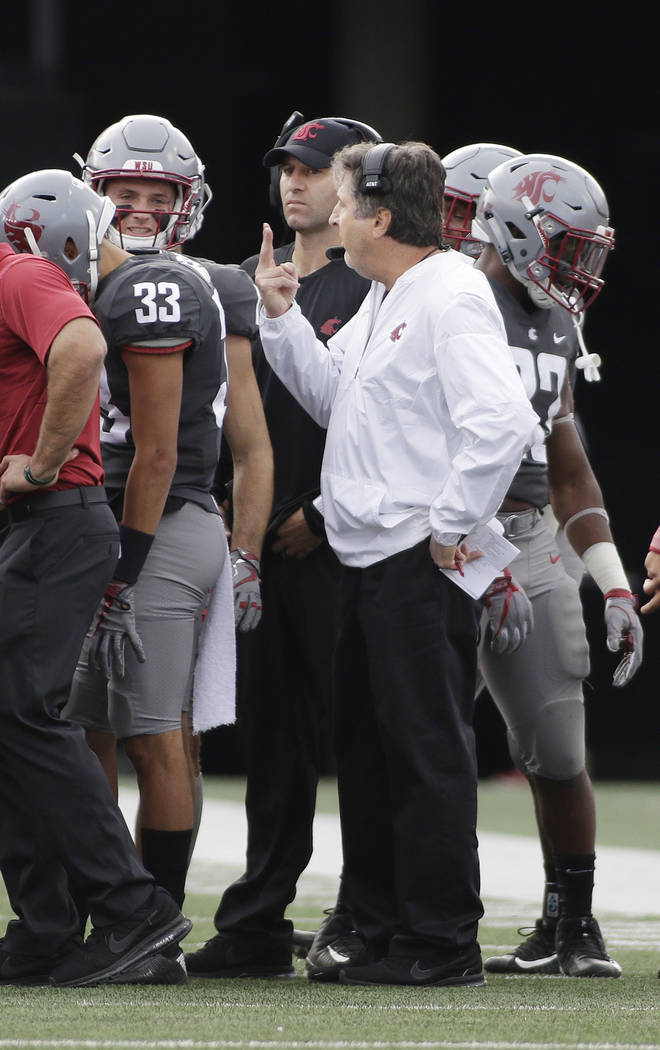 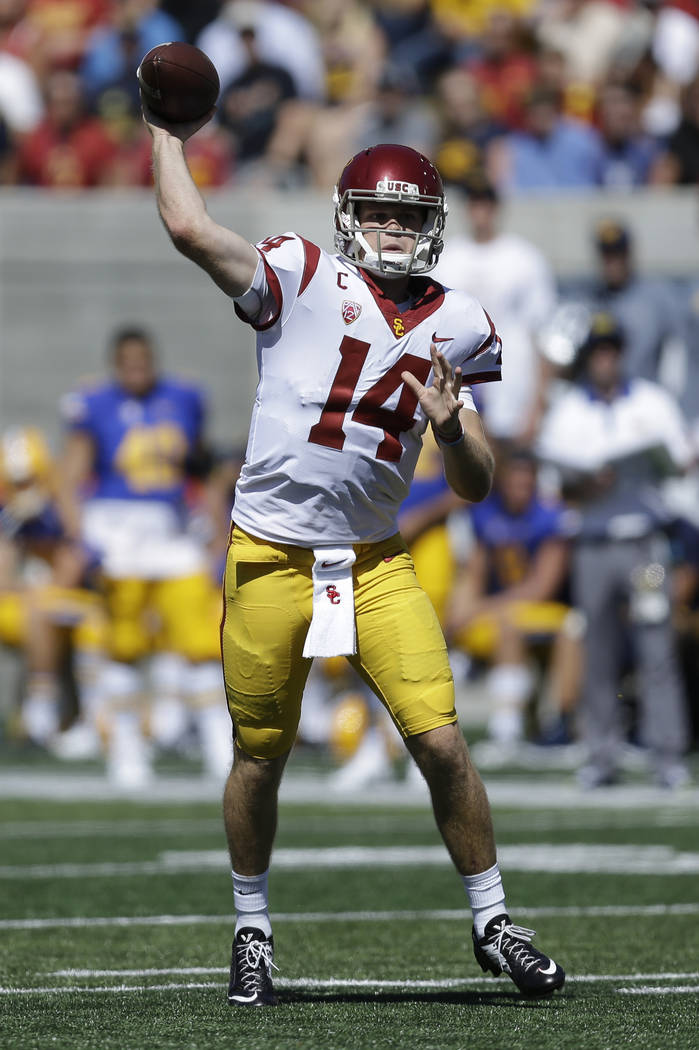 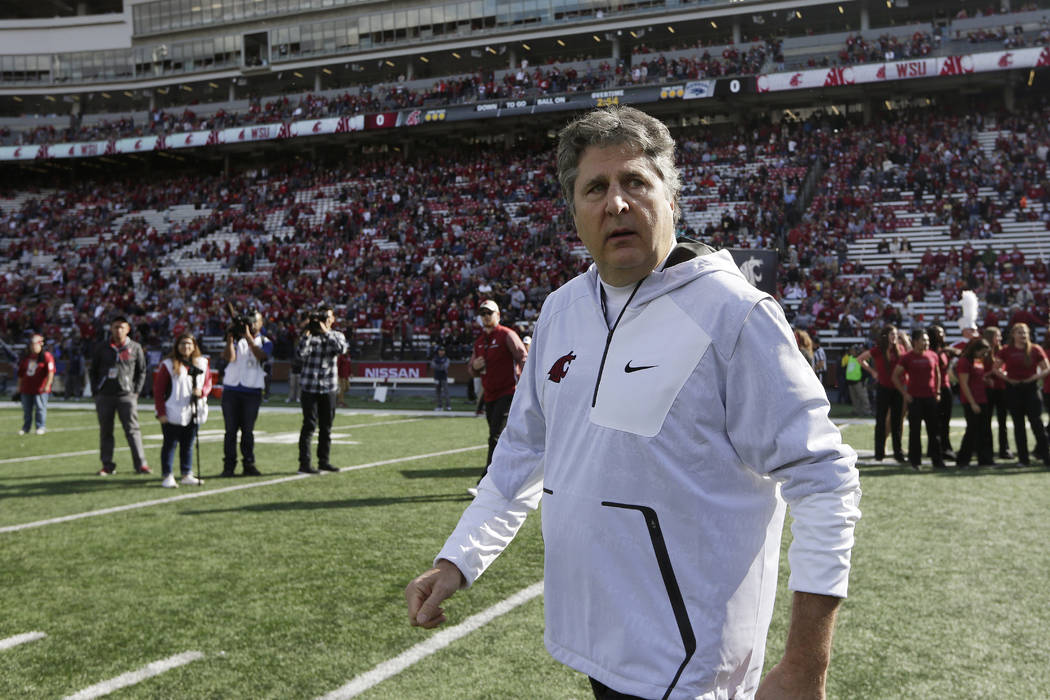 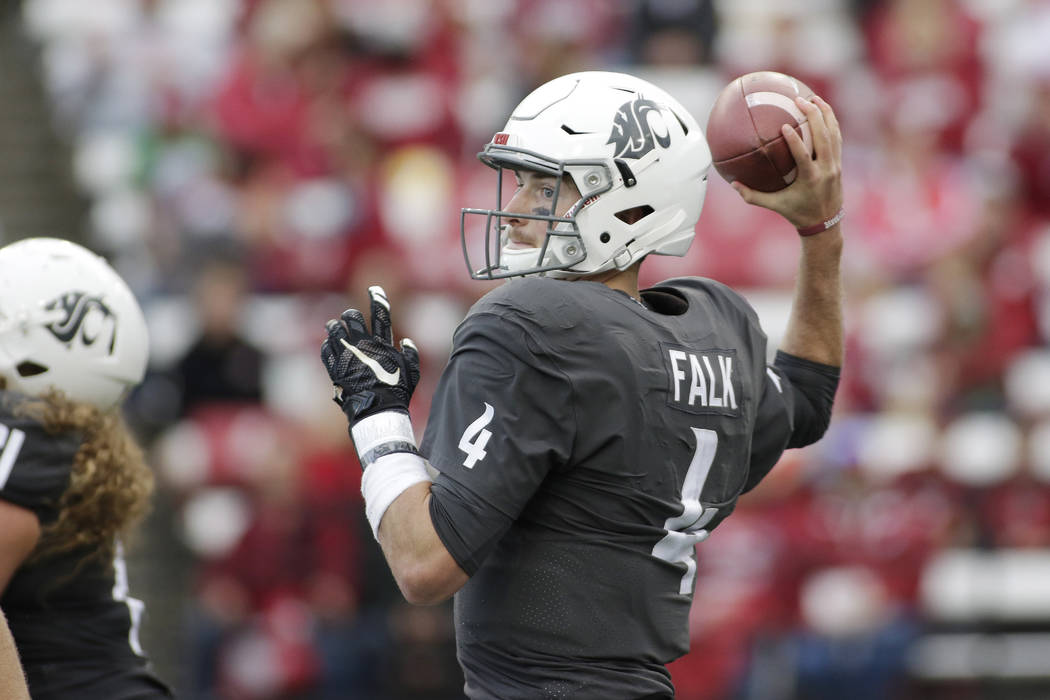 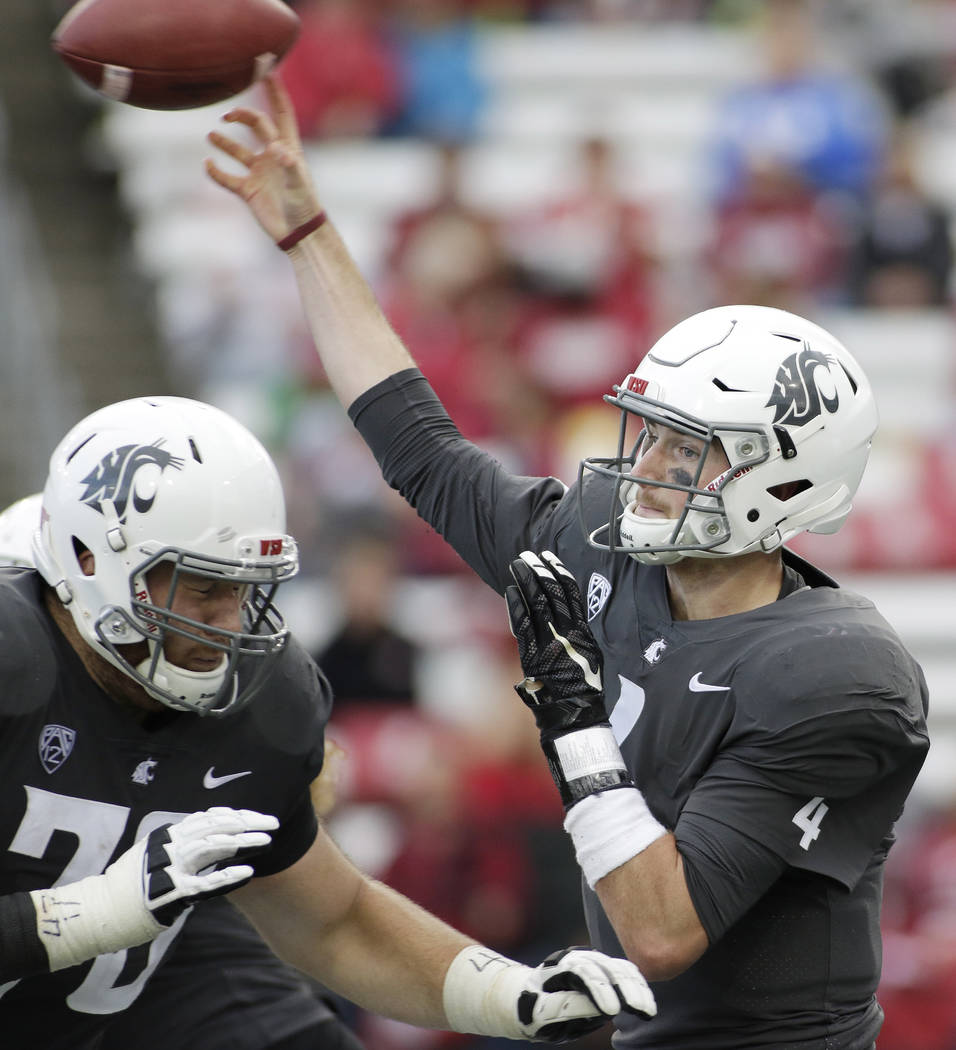 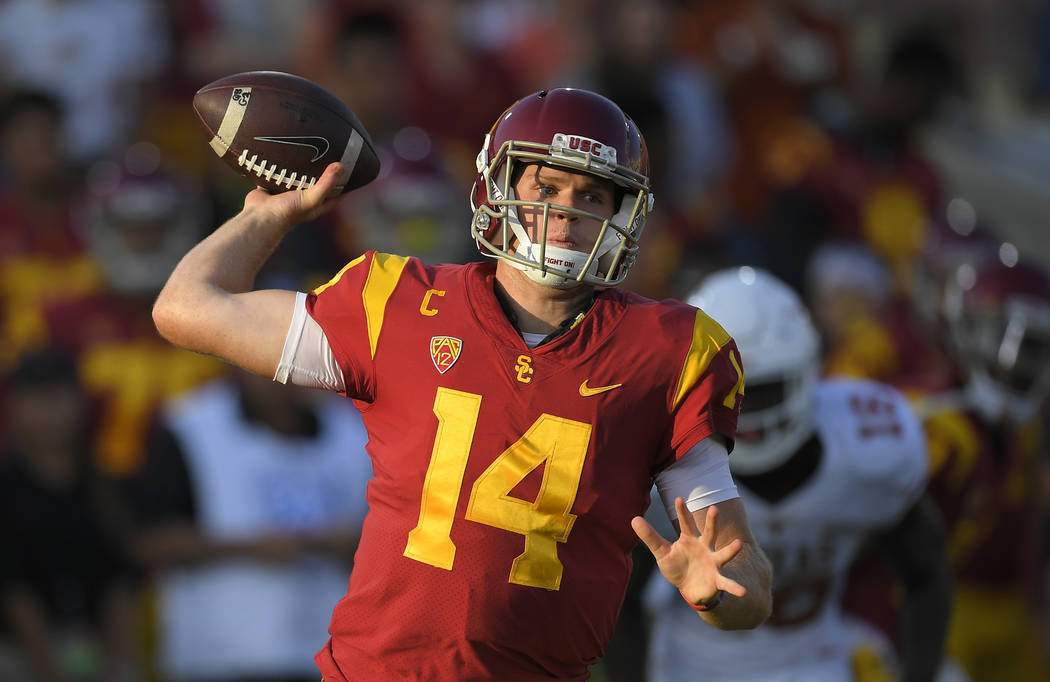 Washington State coach Mike Leach is known as “The Pirate” because of his fascination with pirate history and culture and the fact that he once used a pirate sword as a prop during a speech to his team at Texas Tech.

The swashbuckler who helped create the Air Raid offense will plunder the spotlight Friday night, when his No. 16 Cougars host No. 5 Southern California in one of the weekend’s marquee matchups.

The Trojans (4-0) have won 13 straight games — the nation’s second-longest streak — and are 4½-point favorites over Washington State, which is 4-0 for the first time since 2001.

USC has been bet up from a 3½-point favorite, but Westgate sports book manager Ed Salmons likes the Cougars.

“This game really sets up well for Washington State,” he said. “They’re on national TV all by themselves, and beating USC would be a big statement game for them.

“If I played it, I’d have to play Washington State. You’re asking a lot for USC to win on the road again. They haven’t looked that good the last couple weeks.”

USC, 3-8 against the spread in its past 11 road games, is coming off a 30-20 win at California that followed a 27-24 overtime victory over Texas. The Cougars crushed UNR 45-7 on Saturday in their fourth straight home game to start the season.

“It’s not the best spot for USC,” CG Technology sports book vice president Matt Holt said. “USC has a short week, and Washington State basically had a bye because they played (UNR). I wouldn’t be too eager to lay points.”

“Mike Leach gave Darnold bulletin-board material by saying he’s not quite NFL-ready yet,” Sunset Station sports book director Chuck Esposito said. “But there’s a chance for an upset in that game. It wouldn’t stun me if Washington State won. It’s a huge game for them.”

Another factor to consider is that the Cougars are a PTHD (prime-time home ’dog), which has been known to prevent PTSD in bettors.

The Hokies are a PTHD in Saturday’s showdown with the Tigers, who are 7½-point favorites in the rematch of the 2016 Atlantic Coast Conference title game won by Clemson 42-35.

Holt said CG Technology — which operates books at The Venetian, Hard Rock Hotel and The Cosmopolitan of Las Vegas, to name a few — took some heavy sharp action on Virginia Tech.

“It’s a big-time pros vs. Joes game,” he said. “The sharp guys know Virginia Tech played them tough before and want to have the points there.

Salmons also likes the Hokies, whom he has rated higher than Louisville, which was trounced 47-21 at home by the Tigers on Sept. 16.

“I’ll definitely take a shot on Virginia Tech. That’s a lot of points,” he said. “Clemson’s offense isn’t as good as last year, and Virginia Tech’s defense is definitely better than Louisville’s defense. I think they’re going to keep it pretty close.”

Besides the Hokies, Holt said the sharps are all over Utah State (+1½) over Brigham Young and Navy (-7½) over Tulsa. The Midshipmen opened as 2-point favorites.

Other sharp plays include Northwestern (+15) over Wisconsin, UCLA (-7½) over Colorado and UNLV (-13) over San Jose State.

The Rebels opened as 9½-point favorites Sunday at Wynn Las Vegas. The Spartans are coming off a 61-10 home loss to Utah State and surrendered 110 points in defeats to Utah and Texas.