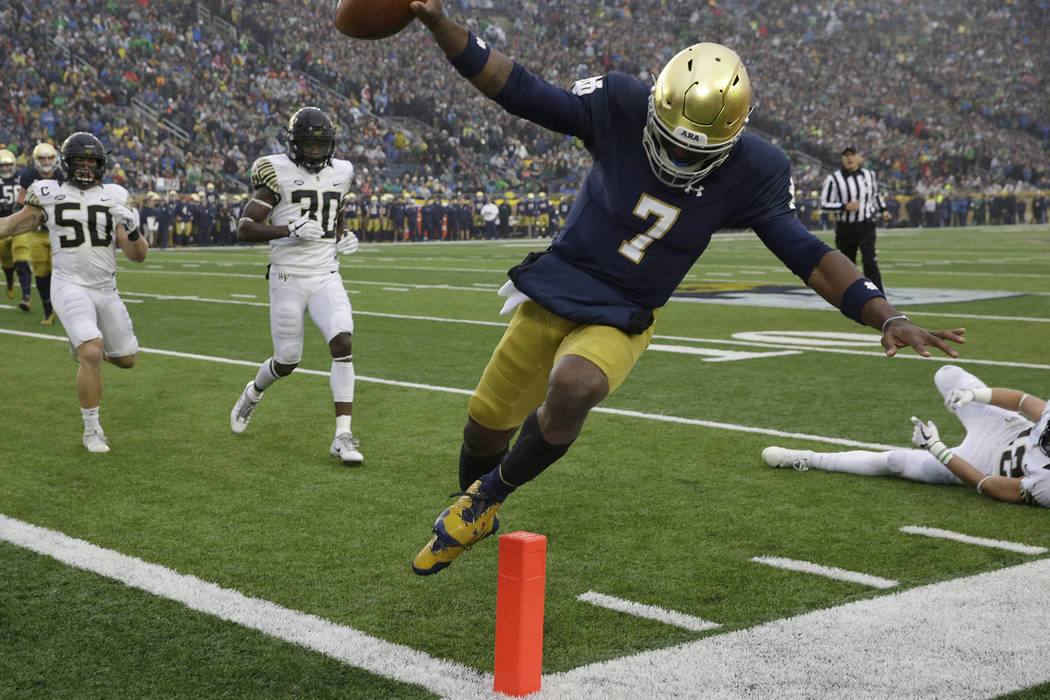 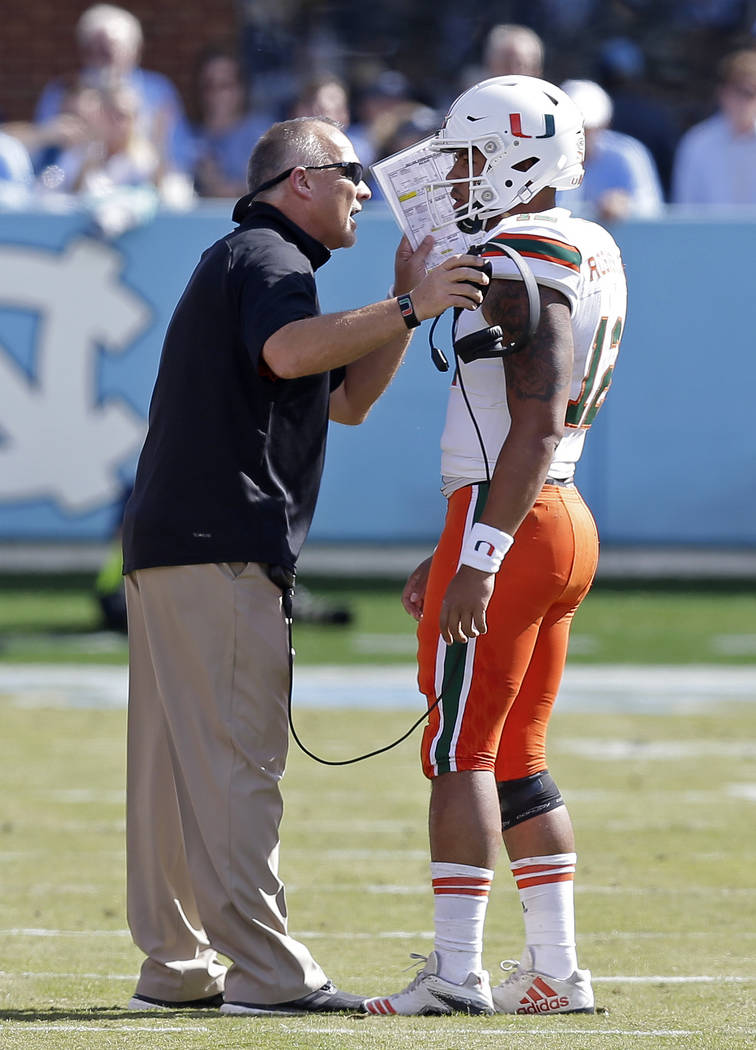 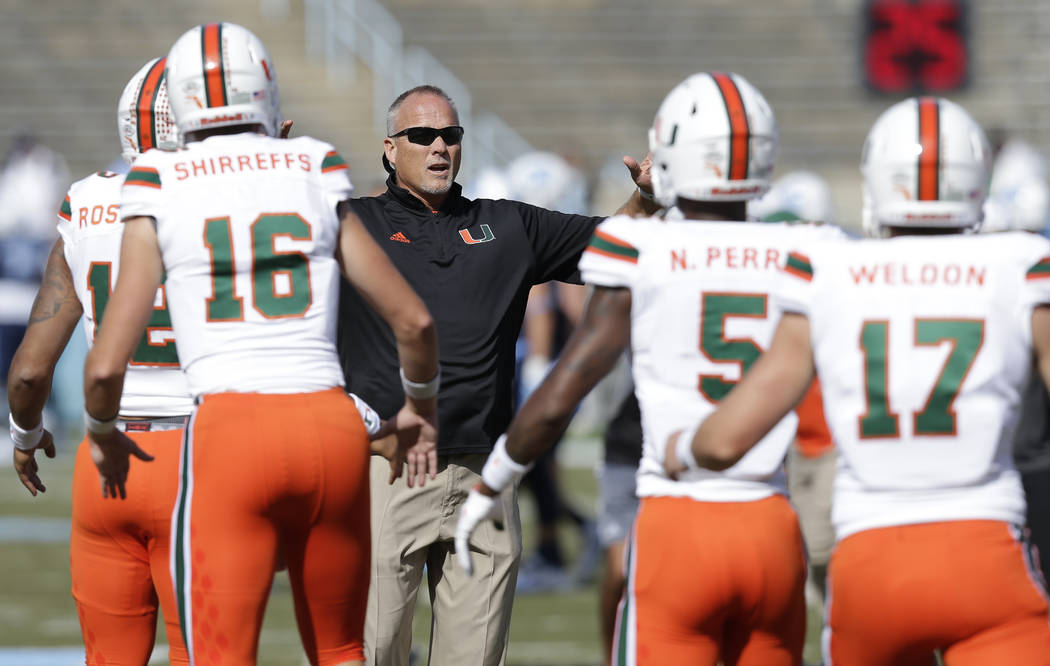 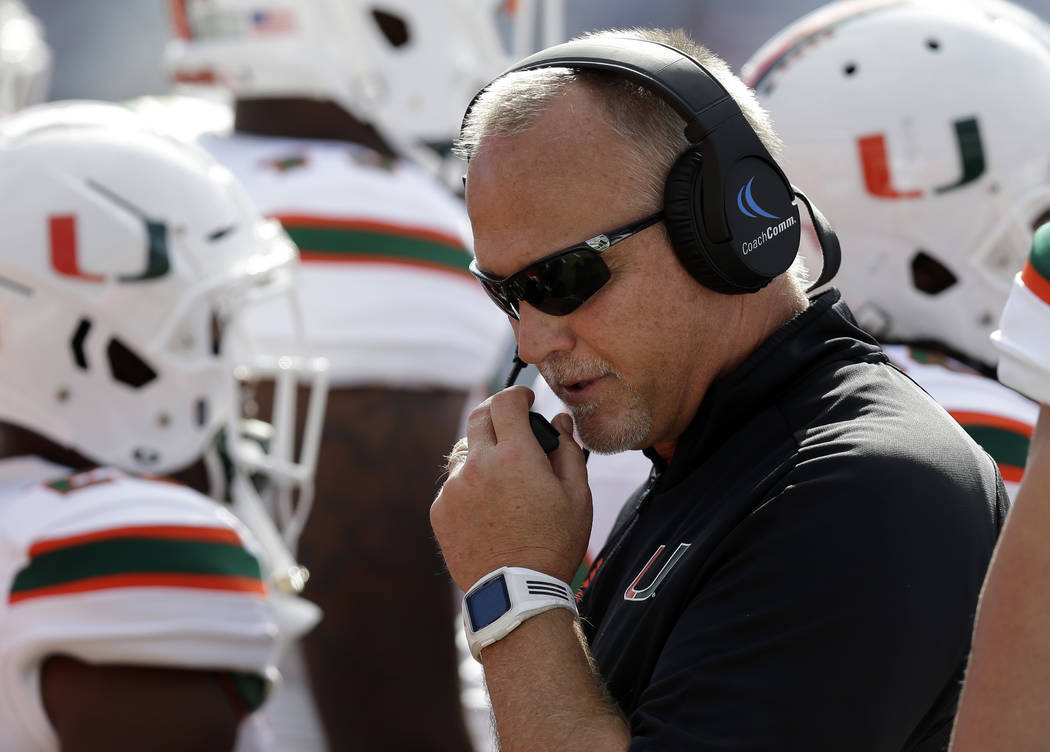 FILE - In this Saturday, Oct. 28, 2017, file photo, Miami head coach Mark Richt speaks into his headset during the first half of an NCAA college football game against North Carolina in Chapel Hill, N.C. Call it a semifinal Saturday in the Atlantic Coast Conference, with Miami and Virginia Tech meeting in a key Coastal Division matchup and Clemson visiting North Carolina State in a marquee Atlantic Division game. (AP Photo/Gerry Broome, File) 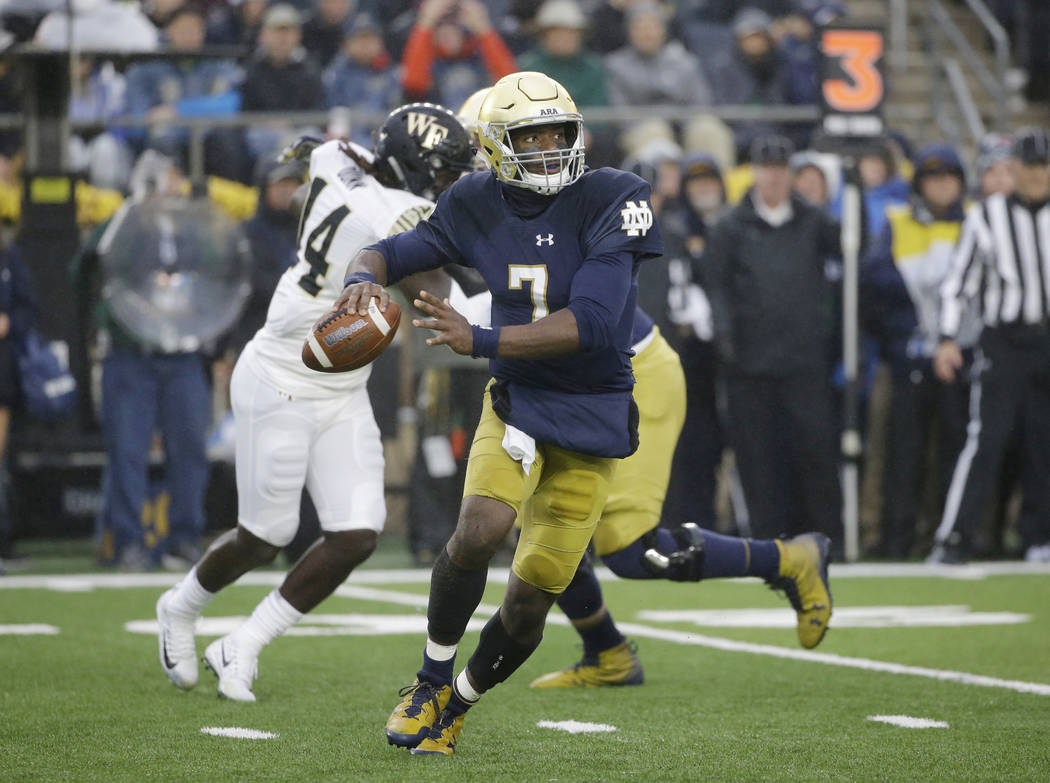 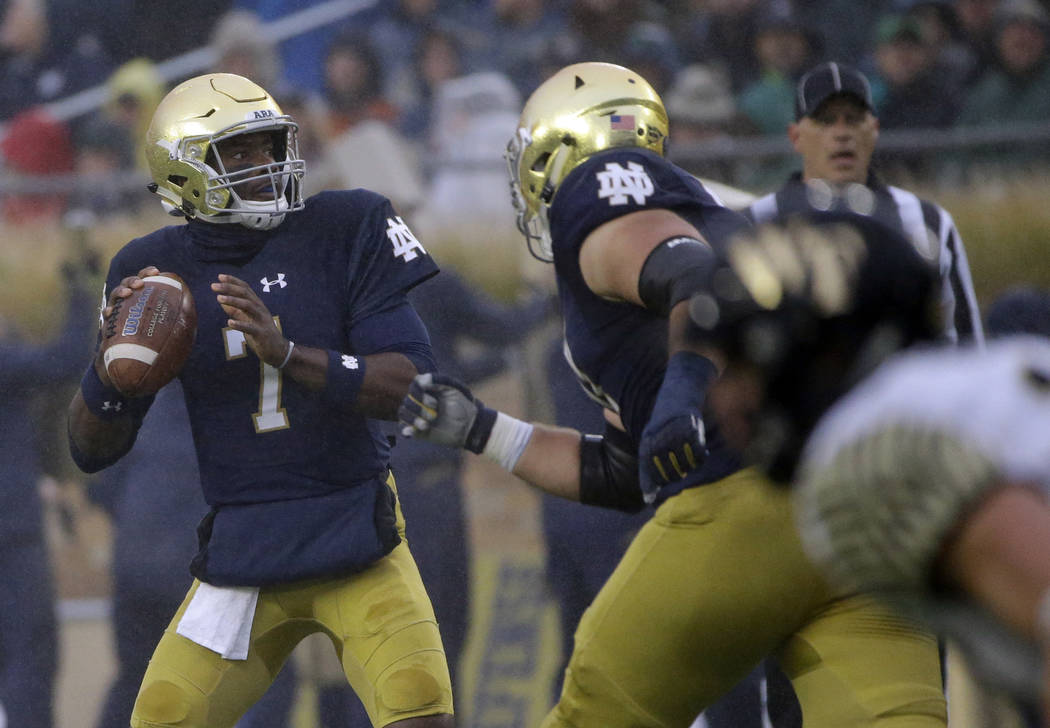 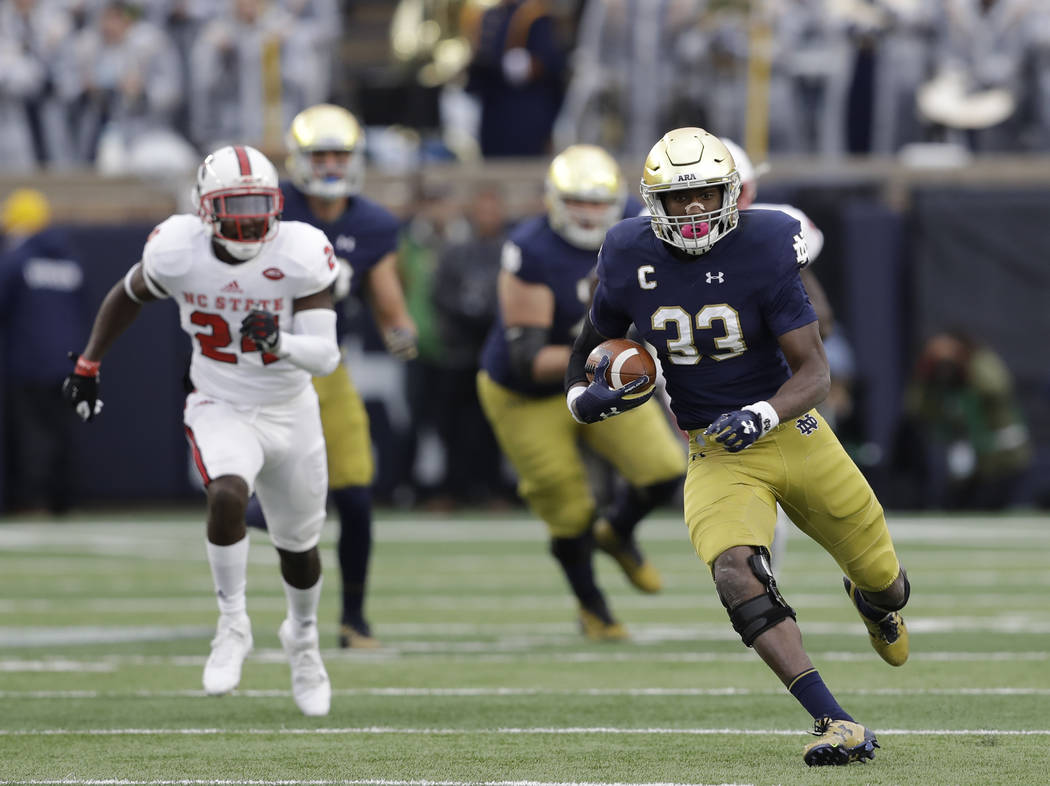 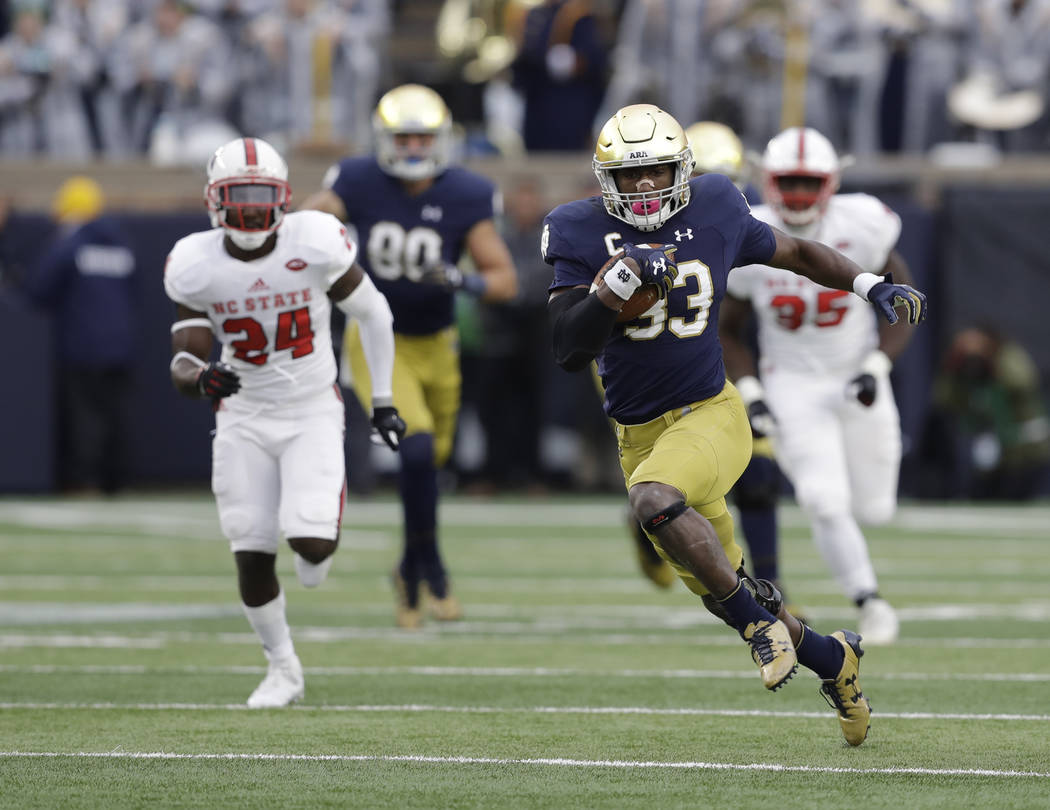 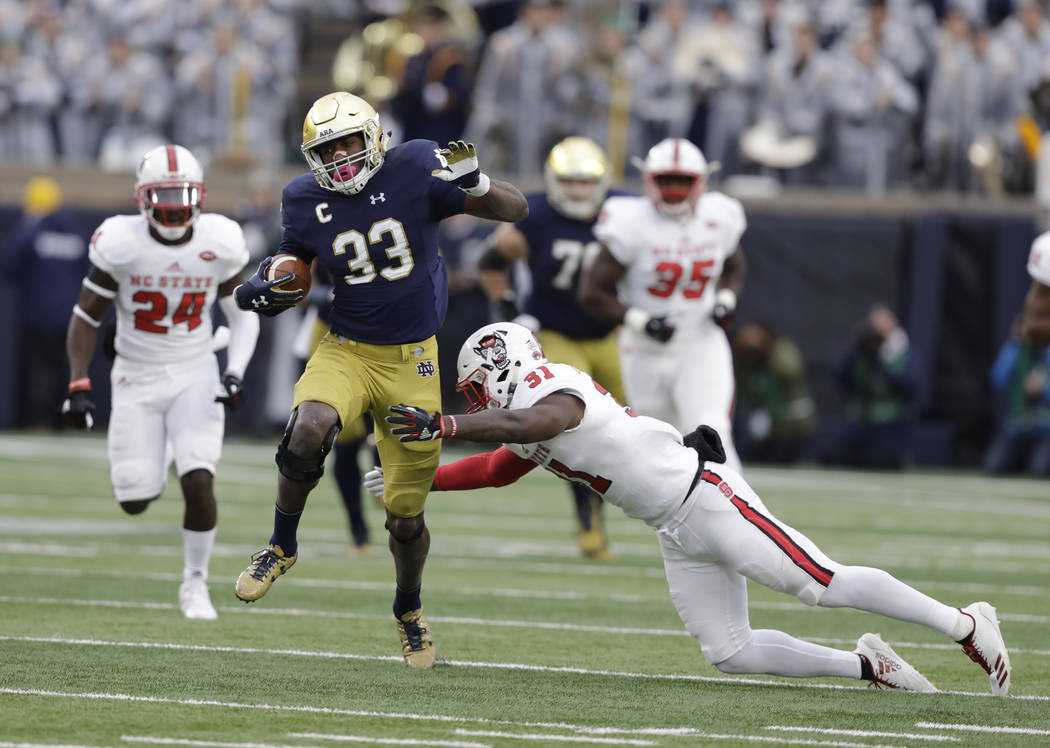 It’s time to fire up the flux capacitor in Doc Brown’s DeLorean or climb into the “Hot Tub Time Machine” for a trip back to the 1980s.

That was the last time Notre Dame and Miami met as top-10 teams.

On Saturday, the No. 3 Fighting Irish and No. 7 Hurricanes will meet in Miami in the most meaningful matchup between the schools since they squared off as top-10 teams in three consecutive seasons in the late 1980s in a heated rivalry highlighted by the 1988 showdown dubbed “Catholics vs. Convicts.”

In what shapes up as a virtual College Football Playoff elimination game, Notre Dame is favored by 3 to 3½ points over Miami at Las Vegas sports books.

The Irish’s only loss this season was by one point to No. 1 Georgia. The Hurricanes are riding a 13-game win streak and haven’t lost since last year’s 30-27 setback at Notre Dame Stadium.

The Irish (8-1), led by running back Josh Adams and quarterback Brandon Wimbush, feature the nation’s fifth-ranked rushing attack (324.8 yards per game) and have won all their games by double digits.

Miami (8-0) held Virginia Tech to 102 yards rushing in an impressive 28-10 win Saturday, but has had trouble stopping the run overall and won its prior four games by an average of 4½ points.

“If you like the Notre Dame side, you’re definitely getting a discount based on what Miami did last week,” Westgate sports book manager Ed Salmons said. “It was definitely their best game of the year. I think Notre Dame will find a way to win. I just think they’re better.

“But it’s nothing I would bet.”

We’ll take the Irish in a game that’s expected to attract the largest betting handle on Saturday.

No. 5 Oklahoma vs. No. 8 Texas Christian

In another virtual CFP elimination game, the 8-1 Sooners are a consensus 6½-point home favorite over the 8-1 Horned Frogs.

The past five meetings have been decided by an average of 4.2 points. Both teams suffered seven-point losses to Iowa State this season — TCU fell 14-7 and Oklahoma 38-31.

“It’s kind of a weird game. Oklahoma is definitely more offensive-oriented, and TCU’s more defensive-oriented,” Salmons said. “Historically, this series has been close. I really expect this to be a close game.”

Caesars Palace sports book director Frank Kunovic said he’s taken sharp play on Miami at plus-3½ and TCU at plus-7.

He also took sharp action on Arkansas (+17½) over Louisiana State and San Jose State (+19½) over UNR.

CG Technology took sharp plays on Iowa State (+6½) over Oklahoma State and Mississippi State (+14) over Alabama, though the line has dropped from 14½.

The Crimson Tide suffered key injuries on defense in their 24-10 win over LSU.

The Cowboys are coming off a 62-52 loss to rival Oklahoma that was pure Bedlam.

“The value is with Oklahoma State,” Salmons said. “The question is will they be able to get up emotionally after that disappointment.”

The college basketball season starts Friday with one Top-25 matchup in No. 11 West Virginia against No. 25 Texas A&M at Ramstein Air Base in Germany.

Bogdanovich said the Mountaineers — 40-1 to win the national championship — are one of three sleepers to attract decent action to win it all. The other two, both 75-1 long shots, are No. 12 Cincinnati and No. 22 Saint Mary’s.

“Cincinnati, St. Mary’s and West Virginia have all got good value and they’re all super live,” Bogdanovich said.

William Hill has written the most futures tickets on No. 2 Michigan State, the 6-1 second choice to win it all behind No. 1 Duke, the 4-1 favorite.

Bogdanovich said the most money wagered is close among Duke, Michigan State and Arizona, the 6-1 third choice.

The season will start in earnest Tuesday when the Blue Devils and Spartans meet in a neutral-site doubleheader in Chicago that will pit No. 4 Kansas against No. 5 Kentucky in the nightcap.

The Wildcats are the 8-1 fourth choice to win the national title and the Jayhawks are the 12-1 fifth choice.

“It’s completely wide open. It always is,” Bogdanovich said of the title race. “All the good players go out early, and at any minute (the NCAA) can start laying penalties on these teams in jeopardy.

“It’s so topsy-turvy. Kentucky is one of the favorites, but they only have one returning player. They could be great or they could be garbage.”