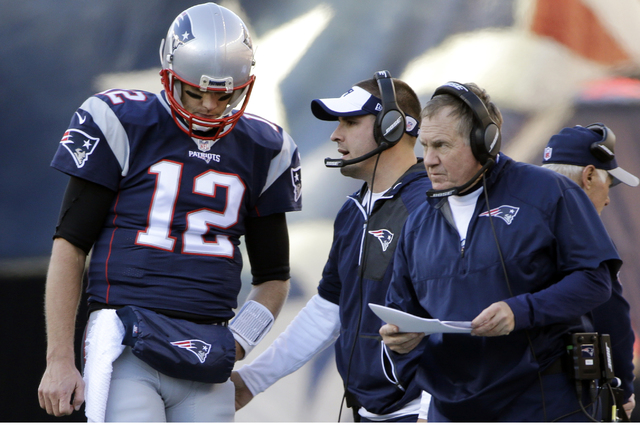 None of them won the Super Bowl.

In fact, none of the eight highest-scoring teams in NFL history won the Super Bowl, with only the 2013 Broncos, 2007 Patriots and 1983 Redskins even reaching the title game.

Matty Ice, Julio Jones and Co. led the league in scoring this season with 540 points (33.8 ppg), which ties the high-flying Falcons for eighth all-time with the 2000 St. Louis Rams. Those Kurt Warner-led Rams, aka “The Greatest Show on Turf,” are the only team ever to produce three consecutive 500-point seasons. But they averaged less than 22 points in two Super Bowls: a 23-16 win over the Titans in 2000 and a 20-17 loss to the Patriots in 2002.

The Rams were 14-point favorites over that unproven New England squad, but couldn’t solve coach Bill Belichick’s defensive schemes until late in the game, when a young Tom Brady and Adam Vinatieri delivered the Patriots’ first title.

Belichick also designed defenses for the Giants that limited John Elway’s Broncos to 20 points in 1987 and Jim Kelly’s Bills to 19 in 1991 en route to two Super Bowl wins. Given two weeks to prepare for Matt Ryan’s Falcons, we expect the evil genius to concoct another successful game plan that will help New England win and cover the 3-point spread.

“In championship games, the team with the better defense usually come through. New England definitely has the better defense,” handicapper Doug Fitz (Systemplays.com) said. “These flashy, high-flying offensive teams usually get shut down by a good defense and I see the same thing happening this year.”

This is the eighth Super Bowl matchup between the NFL’s No. 1 scoring offense and No. 1 scoring defense as the Patriots held opponents to a league-low 15.6 ppg this season. The top defense has won six of the previous seven matchups, including Seattle’s recent drubbing of Denver.

Of course, New England doesn’t have to completely shut down Atlanta to win. With an inspired Brady under center, the Patriots have averaged 30.7 ppg in 14 games this season, including playoffs, and have more than enough firepower to trade punches with the Falcons.

“Atlanta has a great offense but it hasn’t played too many teams that have been able to match them in points,” said handicapper Bryan Leonard (WagerTalk.com, @BLeonardSports).

Leonard likes the Patriots a little but likes under the total of 59 a lot.

“Belichick is smart. He wants to keep Atlanta’s offense off the field as much as possible,” he said. “I think he’s going to run the ball. Atlanta doesn’t stop the run very well. From a prop standpoint, I like (over) carries for (LeGarrette) Blount and (over) yardage for Blount. And that will take time off the clock.

“I can’t see (Belichick) trying to get into a shootout, which would make the under a little bit of value.”

We haven’t even mentioned the intangibles. The Patriots have been a cover machine this season (15-3 ATS) and are playing for history as Brady and Belichick try to become the only quarterback and coach, respectively, to win five Super Bowls.

Brady has played in more Super Bowls than the entire Falcons roster and, despite comments to the contrary, wants nothing more than to exact revenge on NFL commissioner Roger Goodell for Deflategate.

Forget about “One for the Thumb,” the rallying cry for the 1981 Steelers’ quest for a fifth Lombardi Trophy. A mural created by a Rhode Island painting company posted on social media this week reflects the fierce anti-Goodell sentiment in New England. It shows a hand with a Patriots’ Super Bowl ring on every finger except the middle one with the words, “This one’s for you, Roger!”