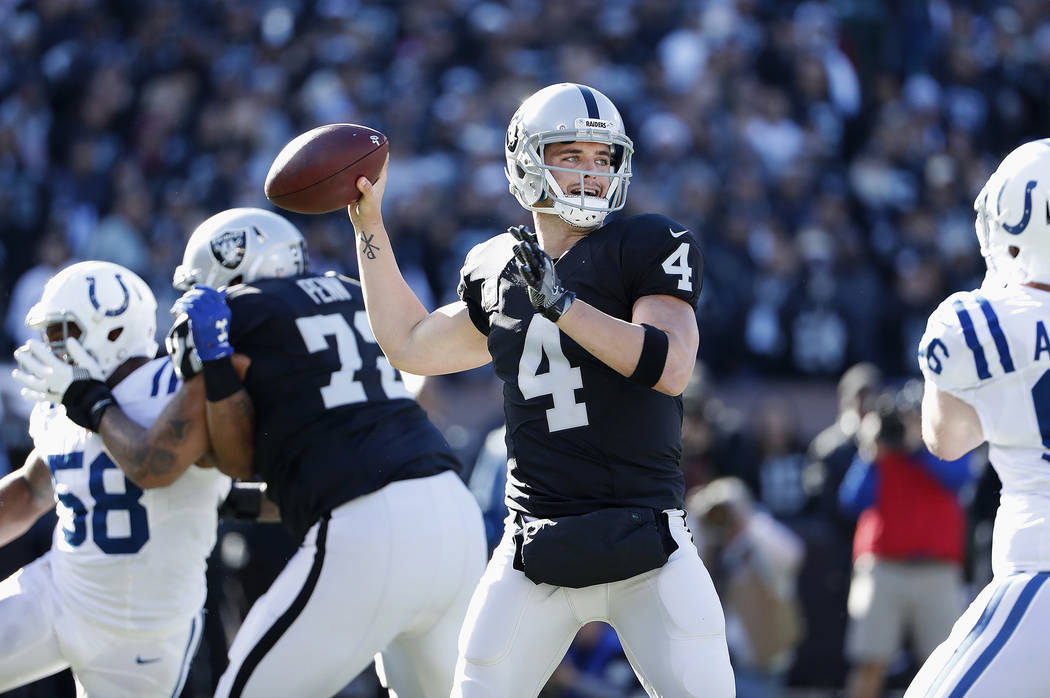 More tickets have been wagered on Las Vegas’ future NFL franchise to win Super Bowl LII than on any other team at the South Point sports book, which has the Raiders at 15-1 odds to win their fourth Lombardi Trophy next season.

“We’ve got a lot of action on them, that’s for sure,” South Point sports book director Chris Andrews said. “There’s always been a lot of Raiders action in this town, but it definitely has increased with the announcement that they’re coming to town.”

The Westgate has Oakland at 12-1 odds to win the Super Bowl, and the Golden Nugget has the Raiders at 10-1 after they opened at 15-1.

“We do have a lot of action on them to win the Super Bowl. I thought they had a great chance last year until Derek Carr broke his leg,” Golden Nugget sports book director Tony Miller said. “Their weak spot right now is defense. Their offense is prolific. If Carr stays healthy and they shore up their defense around Khalil Mack in the draft, they’ll be definite contenders for the Super Bowl.”

Carr threw 28 touchdown passes last season and was eighth in the NFL in passer rating. He has 1,000-yard receivers in Amari Cooper and Michael Crabtree, and the team was sixth in the league in rushing and seventh in scoring (averaging 26 points).

Explosive defensive end Mack tied for eighth in the league in sacks (11) and tied for third in forced fumbles (five), but Oakland finished 26th in total defense. That helps explain why the Raiders had one of the best over-under records in the league last season at 12-5.

Based on the NFL Week 1 regular-season lines posted by the Westgate on Thursday night, when the 2017 schedule was announced, oddsmakers don’t expect the Raiders’ defense to improve much this year.

Oakland, which went 10-7 against the spread last season, opens on the road against Tennessee in a pick’em game that features the highest total (53½) of all 16 games.

“I certainly think they’re a team on the rise, but they do have to fix their defense a bit,” Westgate sports book director Jay Kornegay said.

Miller expects the Raiders’ home-field advantage to take a hit because of the team’s impending move to Las Vegas and has dropped it from the usual three points to two.

“I remember that happening with the Houston Oilers when they were moving to Nashville. Nobody went to the games at the Astrodome, and all the players did all year long was answer questions about the move. It was very distracting,” Miller said. “The only difference is the Raiders are a Super Bowl contender. Can you imagine if they start the season out 9-0 or 10-1? People have to go to the games, right?

“It’s a crazy situation. It really is. The first home game of the season, it won’t sell out and there will be a lot of boos.”

While the potential signing of Oakland native Marshawn Lynch might prove good for public relations, oddsmakers aren’t so sure the retired running back — who turns 31 on Saturday — would be good for the offense after sitting out last season.

“You never know with these running backs, it seems like they fall off the cliff rather dramatically,” Andrews said. “He probably lost a step before he retired, and will taking a year off help him or hurt him?”

In eclipsing their win total of 8.5 last season, the Raiders won five games by three points or fewer and beat Tampa Bay by six in overtime. Andrews expects Oakland to lose a few of those close ones this season.

“I think they regress a little this year,” he said. “Historically, most teams don’t just have the straight-up ascension. They’ll start out in the right direction, then maybe take a step back and keep going. It seems like there’s always a little blip in the rise.

“They’re still a young team that’s done a lot of things right. But typically you don’t just go from a mediocre franchise to a Super Bowl winner with nothing in between.”

If that’s the case, the Raiders should be primed for a title run about the time they move to Las Vegas.