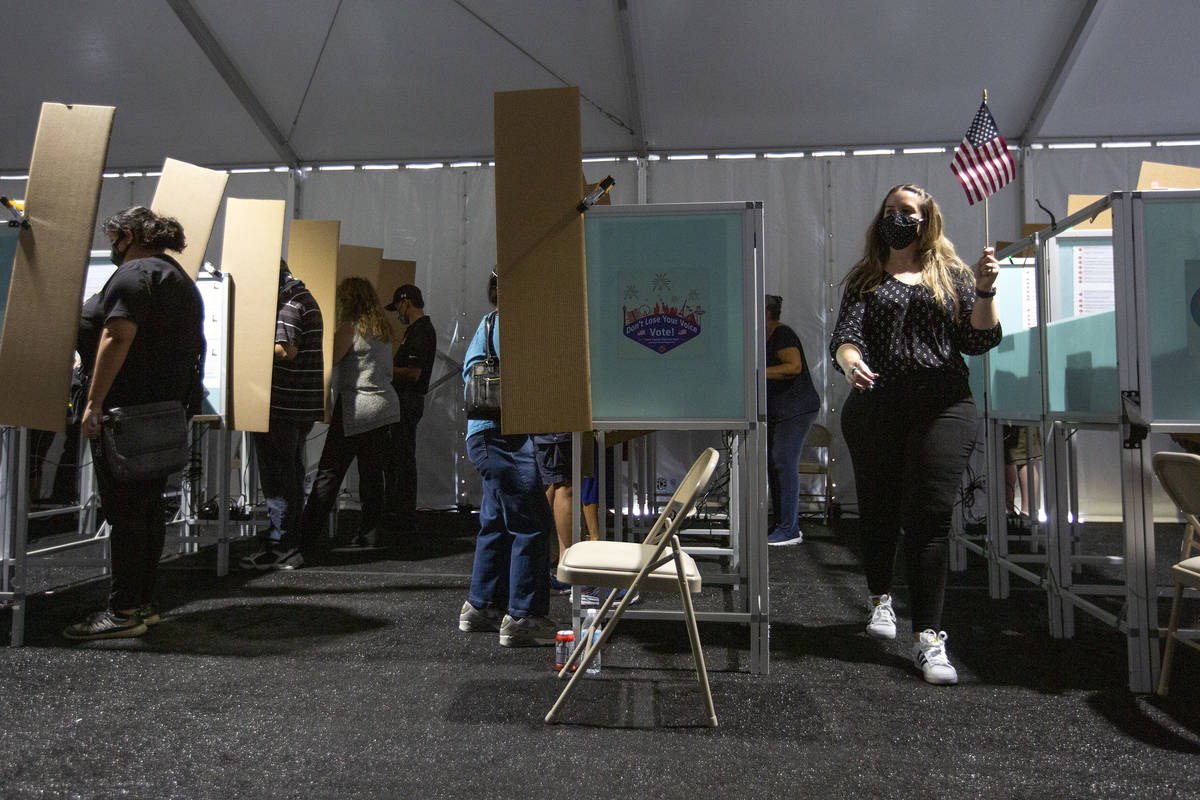 The Boulevard Mall early voting location is full with a line outside on Saturday, Oct. 17, 2020, in Las Vegas. (Ellen Schmidt/Las Vegas Review-Journal) @ellenschmidttt

With early voting set to wrap up Friday and Election Day a week away, Nevada political organizers have shifted yearlong plans to turn out voters into the final gear in what Democrats and Republicans agree will be a tight race for the state’s six electoral college votes.

Democrats and their allies hope their case against President Donald Trump, focused mainly around a global pandemic that hit America hard and Nevada harder still under his leadership, will finally be enough to motivate young people and communities of color to paint a purple state firmly blue in this election and beyond.

“We have worked for many, many months to ensure victory in Nevada, and the last 10 days is where everything we’ve done comes together,” said Shelby Wiltz, coordinated campaign director for former Vice President Joe Biden’s Nevada campaign.

Republicans, with nearly four years on the ground and an elaborate data system even longer in the making, say they’ve identified and made millions of attempts to contact a core voter base that will erase a Democratic early voting lead on Election Day.

“No Republican or conservative or even Democratic voter who’s fed up with (Gov. Steve) Sisolak and has seen what happens when Democrats have single-party rule in this state will be left unturned,” said Jeremy Hughes, regional political director for Trump’s campaign.

As of Monday morning, Democrats held a lead of about 55,000 votes, or 8 percentage points, over Republicans in terms of raw ballots submitted through mail or early voting. The state’s total turnout was just more than 38 percent.

According to Hughes, this early lead is due to Democrats already tapping out their regular, loyal voter base.

“Democrats have cannibalized their perfect voters,” he said. “They’ve maxed out that universe. We still have a lot of voters who never miss an election still out there.”

Hughes said the Trump campaign has encouraged early voting but understands that many of its base voters prefer to vote in-person on Election Day.

The campaign’s focus in this final week will be on contacting low-propensity voters, those who are newly registered or don’t vote often, as often as needed to get them to the polls. The hope is that rallies hosted in Nevada this week by Trump, Vice President Mike Pence and Trump’s family members will give this effort a further boost.

The campaign has maintained a Nevada presence since narrowly losing the state in 2016, and has built it up in recent months. With millions of in-person and remote voter contacts already logged, Hughes believes the Democrats and their allies will not catch up to the Republican field organization.

Unions out in force

Geoconda Argüello-Kline, the secretary-treasurer and public face of the state’s powerful 60,000 member Culinary Union Local 226, said more than 350 organizers were currently knocking on doors and handing out literature for Biden, with another 200 and counting working the phones.

“This is the most important election of our lifetime, and our workers know this,” she said. “We have been suffering a lot. Fifty-one members or their family members have died, with over 30,000 laid off. They see the difference of what happened here. They know Trump will never tell us the truth about COVID-19.”

This well-known Democratic machine got started later than usual because of the COVID-19 pandemic, but Argüello-Kline stressed its organizer network was growing and working tirelessly to turn out more voters in the hopes of delivering a statement win for Biden.

The union is using its diverse, largely immigrant workforce to mobilize voters in communities like the Historic Westside.

Hanna Alamuu, an Aria guest attendant who lost her job during the state’s COVID-19 shutdown, is working to organize her fellow Ethiopian immigrants in support of Biden.

Alamuu, a Deferred Action for Childhood Arrivals recipient, can not vote in the upcoming election and works instead to “give her voice to all” through organizing.

Yarleny Roa-Dugan, a registered nurse in Las Vegas, is working to organize her fellow front-line health care workers for Biden in a similar fashion as part of the Service Employees International Union, Local 1107’s efforts.

“All of us want to have a leader who will protect us so that we can do our jobs the best that we can,” Roa-Dugan said.

“The lack of leadership in the last four years, especially the way the pandemic was handled, have made these people who are not used to going out and voting more eager,” she said.

Grace Vergara-Mactal, executive director of SEIU 1107, said the 19,000 member union has already seen a major jump in participation from infrequent voters, who have shown out in numbers at more than five times 2016 levels.

In all, more than 25 percent of the Nevada voters who’ve already submitted a ballot in 2020 did not participate in 2016, she said.

Some of these infrequent voters are likely also categorized as the youth vote, broadly those 18 to 35 years old and a constant wild card for Democrats.

Mark Riffenburg is the state director for NextGen America, a progressive advocacy group founded by billionaire and former 2020 Democratic presidential hopeful Tom Steyer. He believes the early turnout numbers show the promise of a stronger than usual youth vote turnout.

“At the end of the fourth day of early voting in 2016, 26,500 young people had voted,” Riffenburg said. “That number is 45,621 in 2020. It’s an apples to oranges comparison. This is a different kind of election with mail balloting, but it’s encouraging.”

Riffenburg also noted that some 72,000 young people participated in the first 10 days of early voting in 2016, but 69,000 voted in the final four days — meaning younger Nevadans tend to wait until closer to Election Day.

With a goal of 15,000 in mind, NextGen secured more than 20,000 pledges to vote from young Nevadans who may need a few reminders to vote.

Given 2016 Democratic nominee Hillary Clinton won the state by only about 27,000 votes, Riffenburg said, such a boost in youth voting could “pretty radically change the game.”

Riffenburg said many millennial voters in their 30s are frustrated with the government system still ran by their parents’ and grandparents’ generations, with younger voters now looking to see how the large millennial voting bloc chooses to address issues like climate change and racial inequality.

So far, it remains to be seen whether this call will go unanswered.

Voters under 35 account for about 27 percent of Nevada’s electorate but make up just 16 percent of ballots counted tallied so far, according to the Nevada secretary of state’s office.

Wiltz, the lead organizer for Biden’s Nevada campaign, said the final push will focus on having as many direct conversations with voters as possible, whether digitally or in-person.

“Conversations 10 days out are the most impactful you can have, particularly face to face,” Wiltz said.

Voters are also more likely respond positively when approached by someone they know, so the campaign has for months trained volunteers on how to approach friends and family for this conversation, referred to as relational organizing.

Meeting voters of color, who make up a little less than half the electorate in Nevada, in their communities and engaging them in their preferred languages is also a focus, Wiltz said.

Wiltz said the organizers are not letting the early advantage throw off their focus.

“The last 10 days are not a time to get complacent or comfortable,” she said.