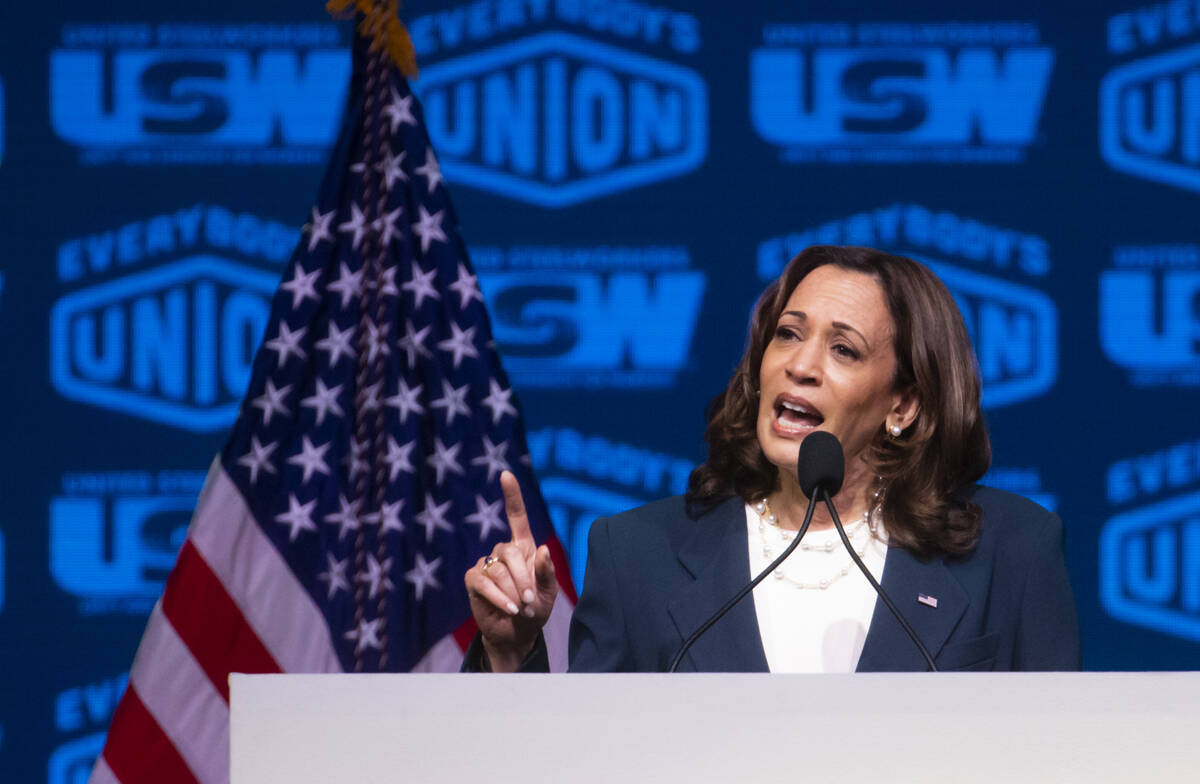 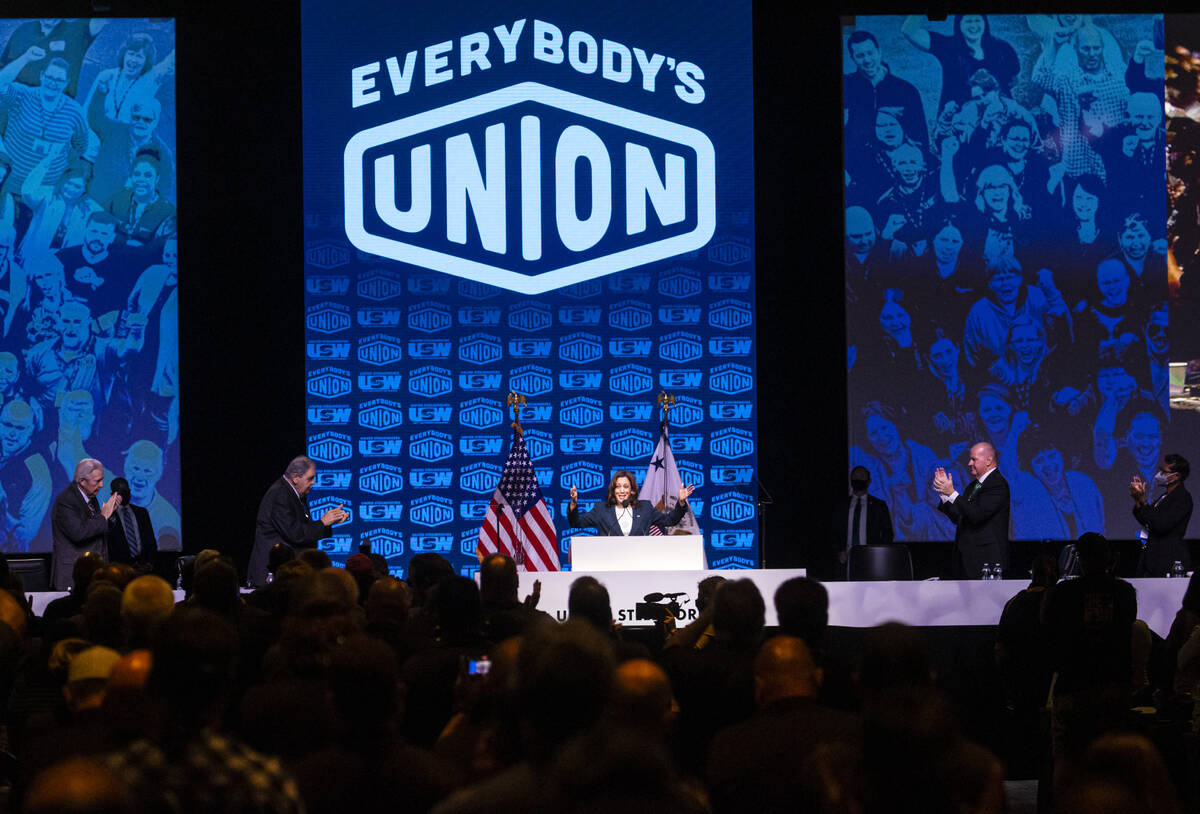 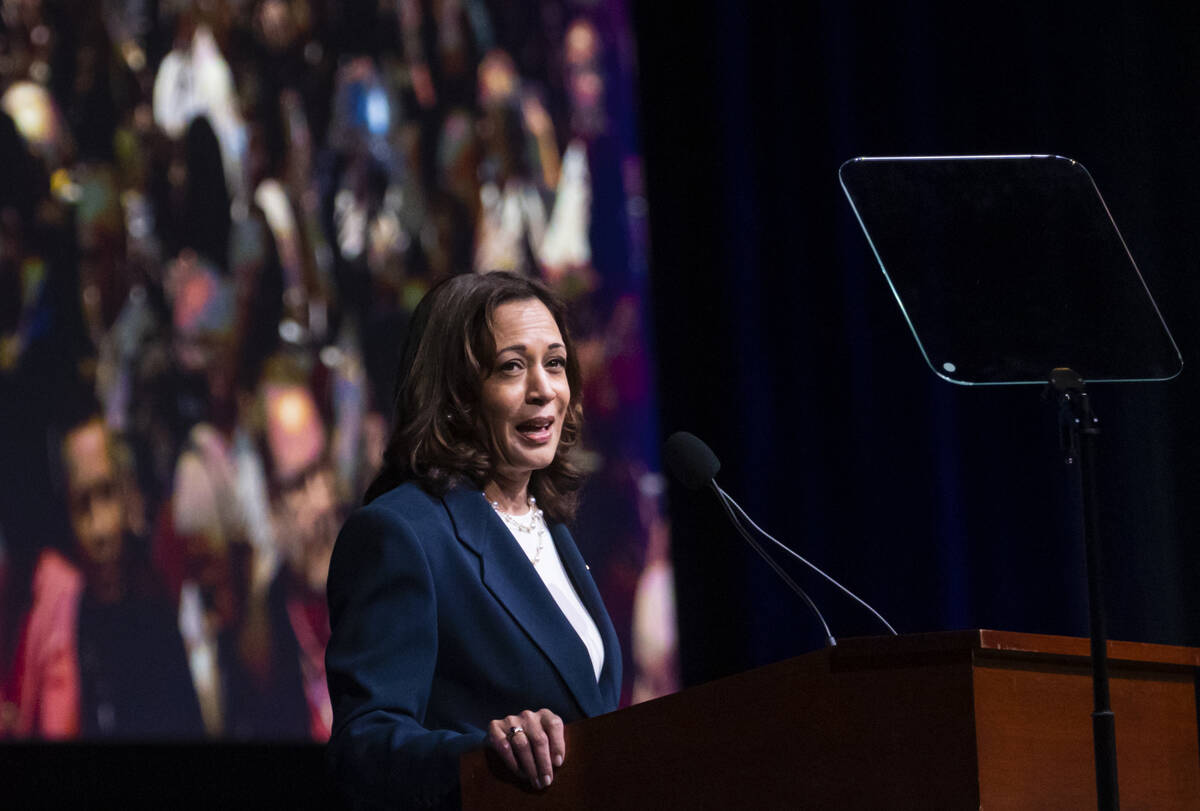 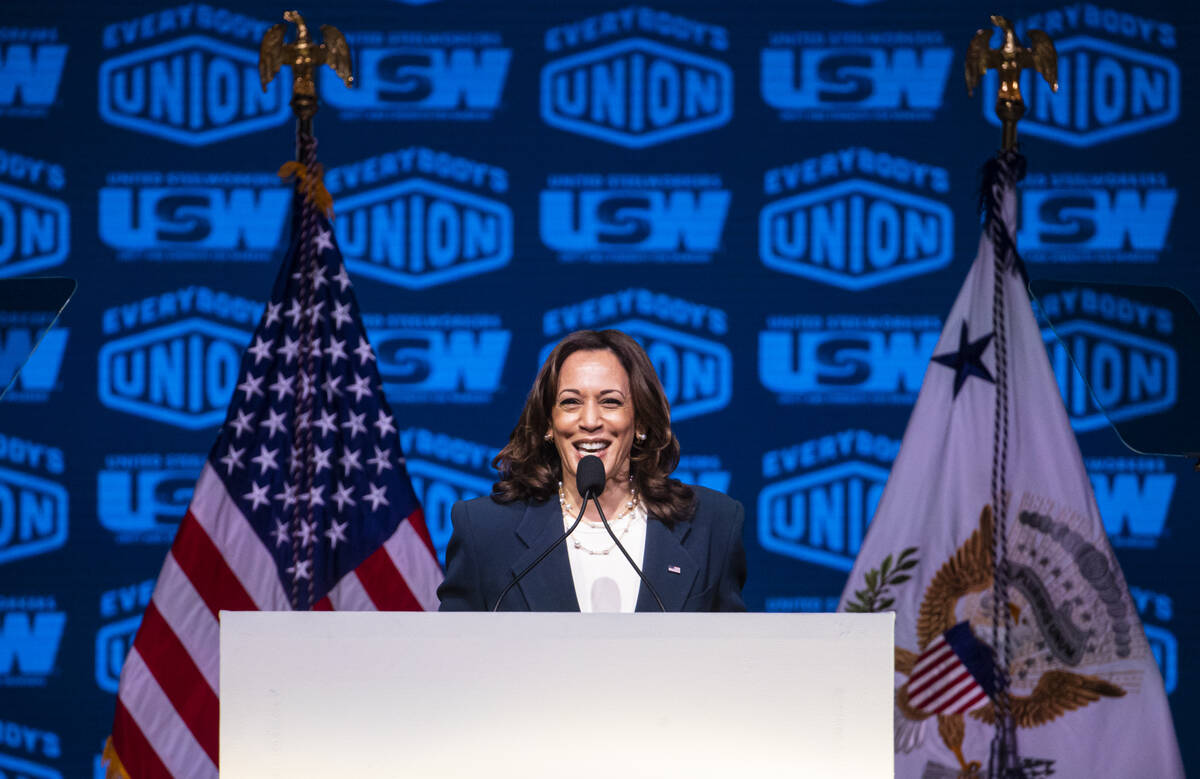 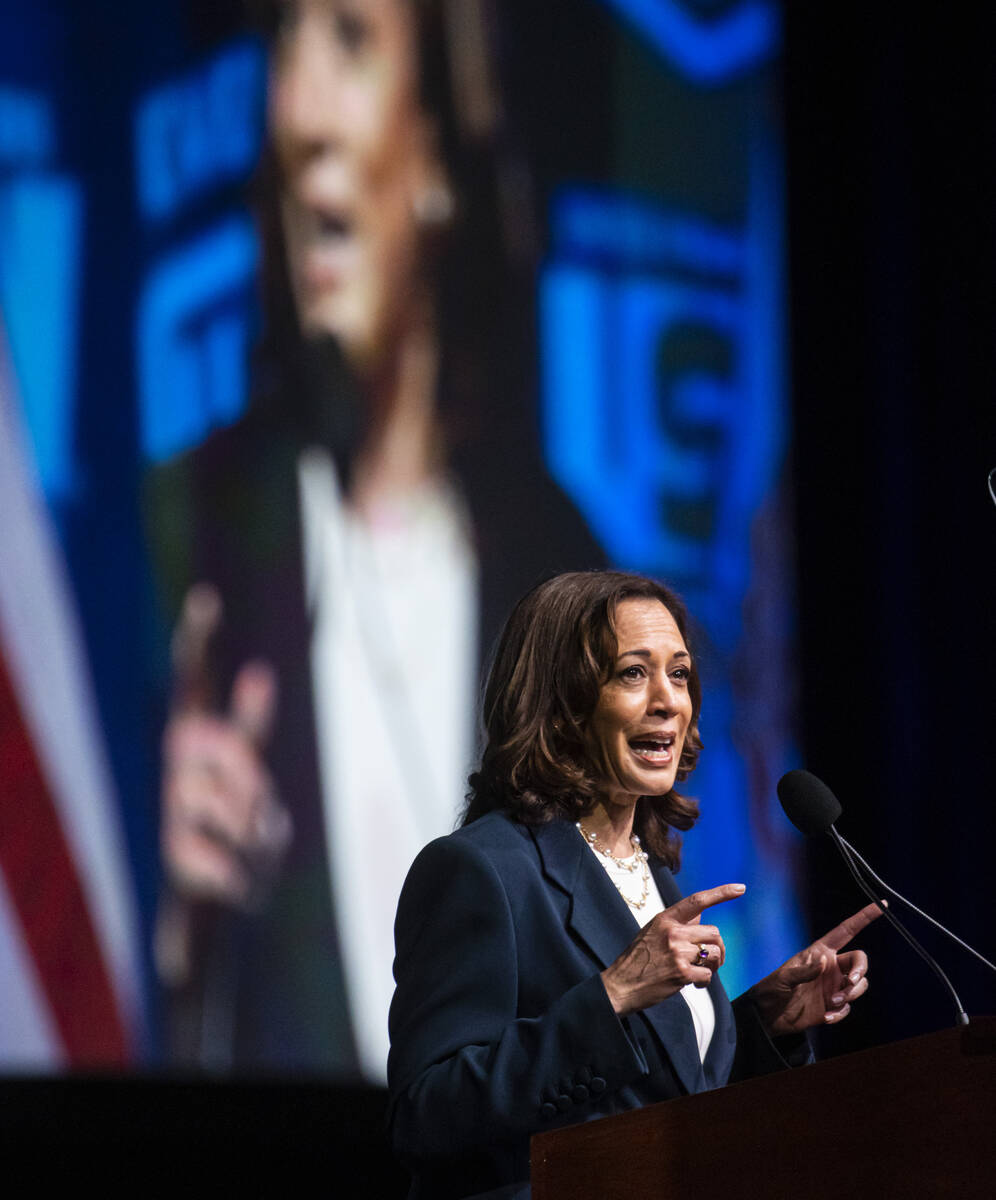 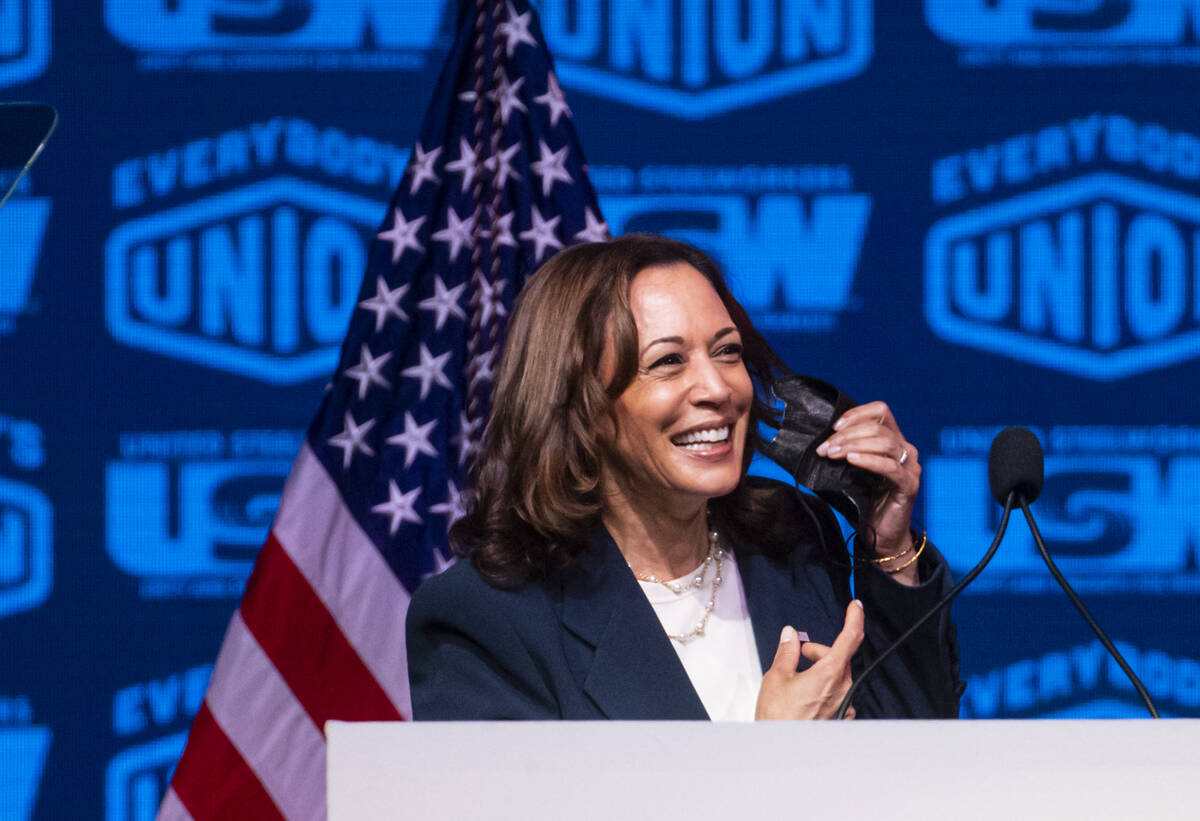 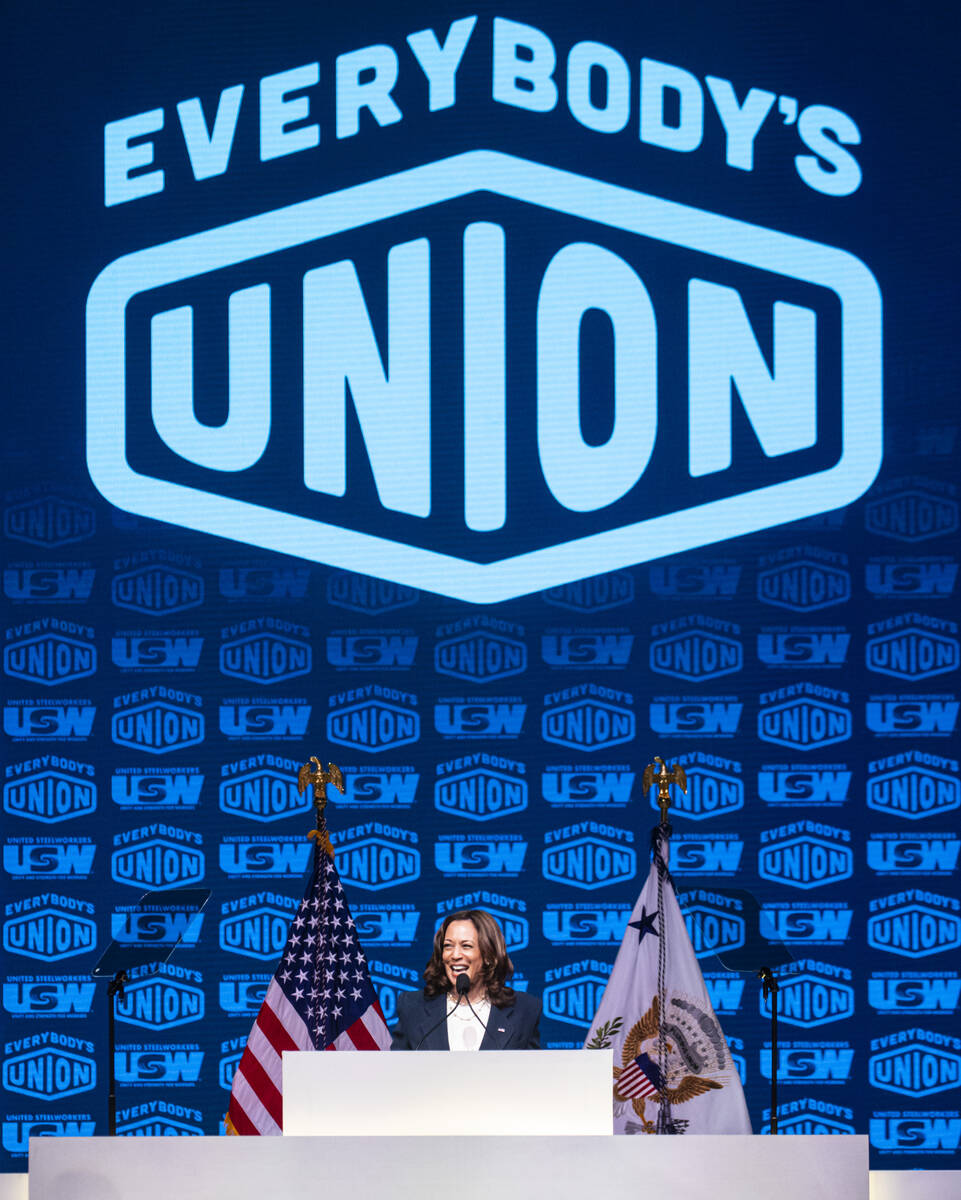 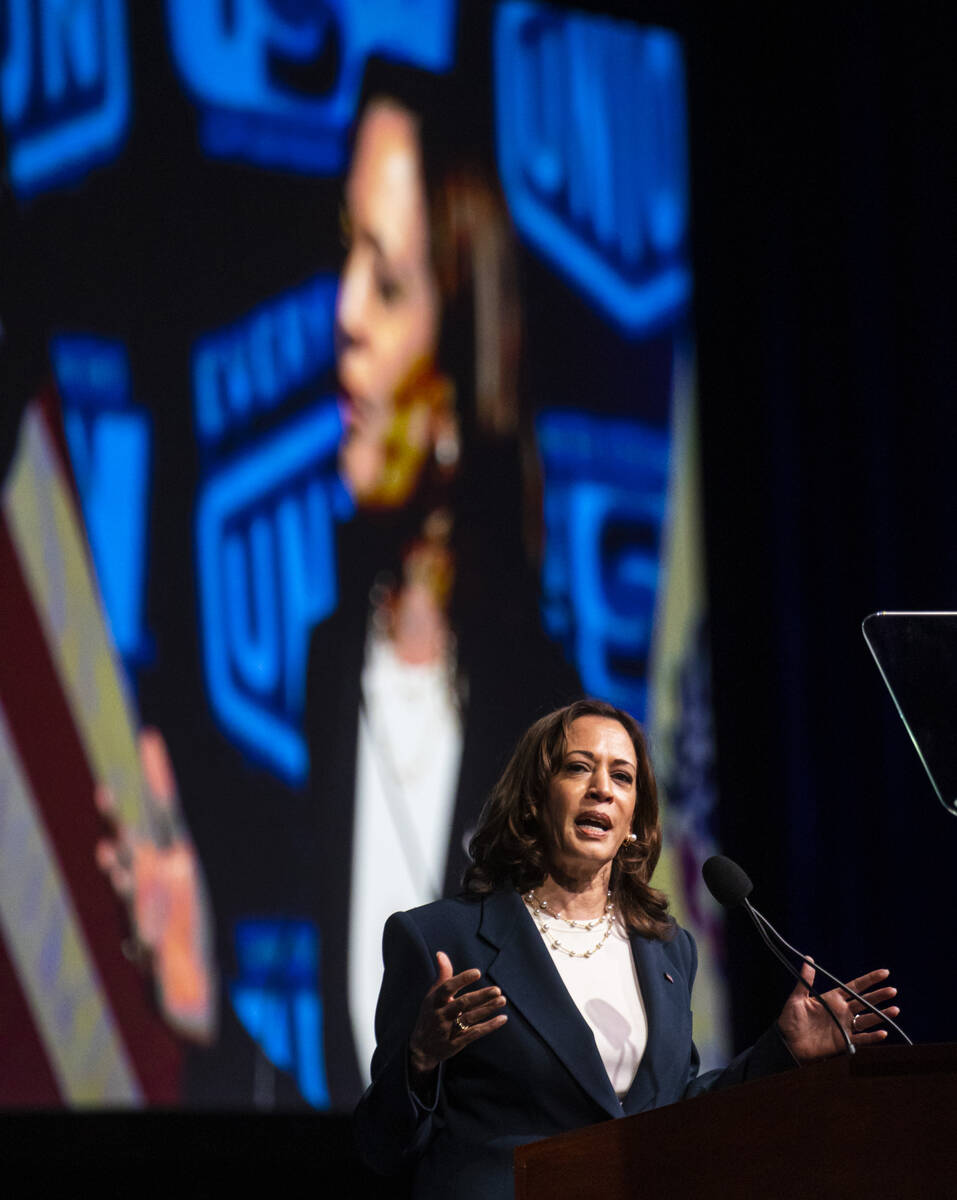 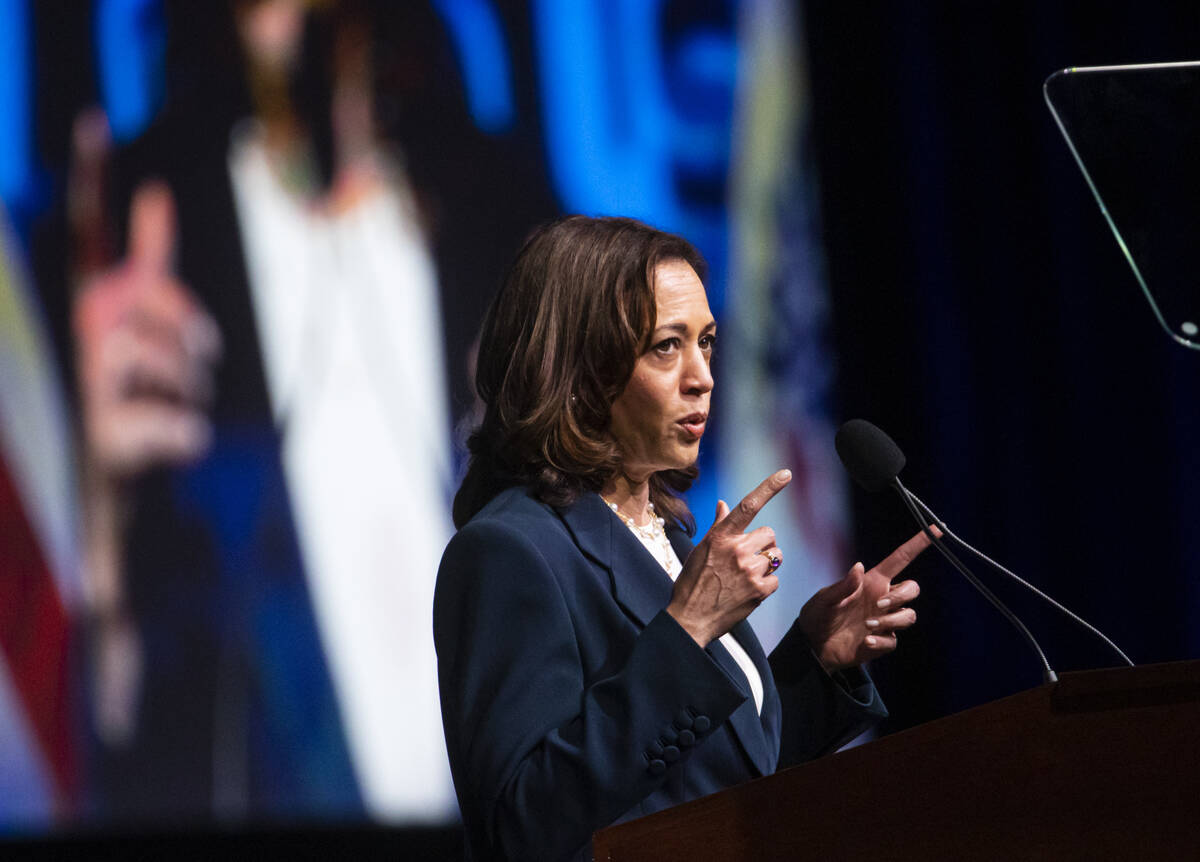 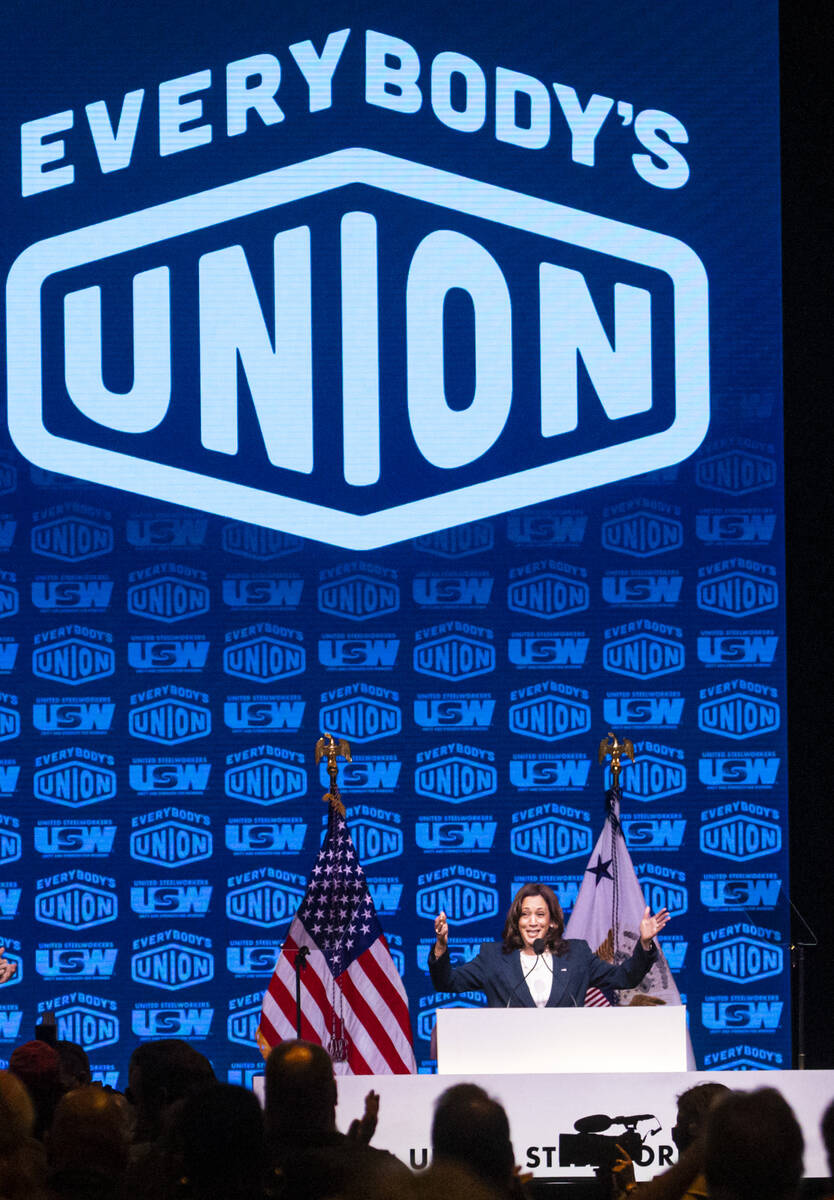 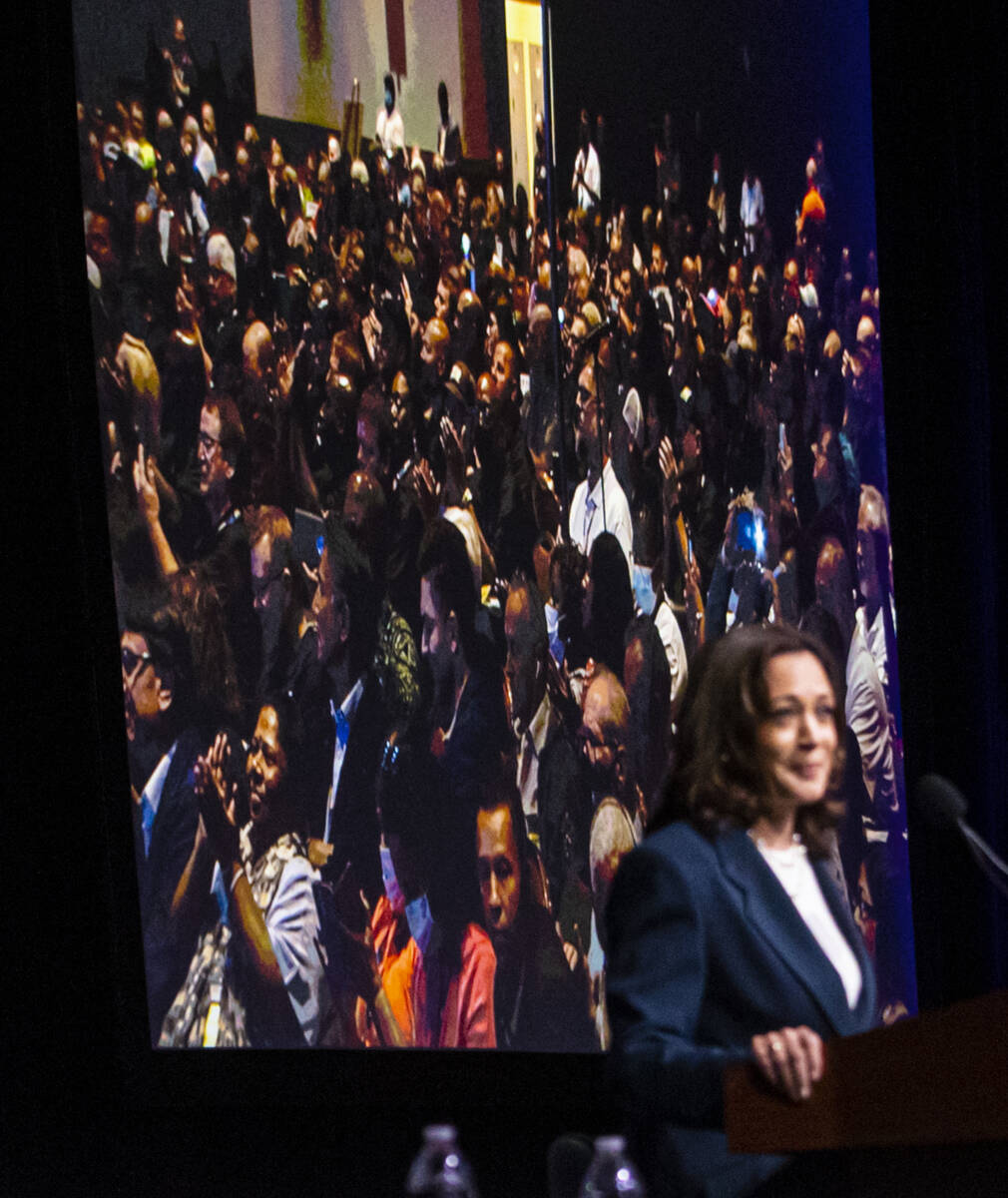 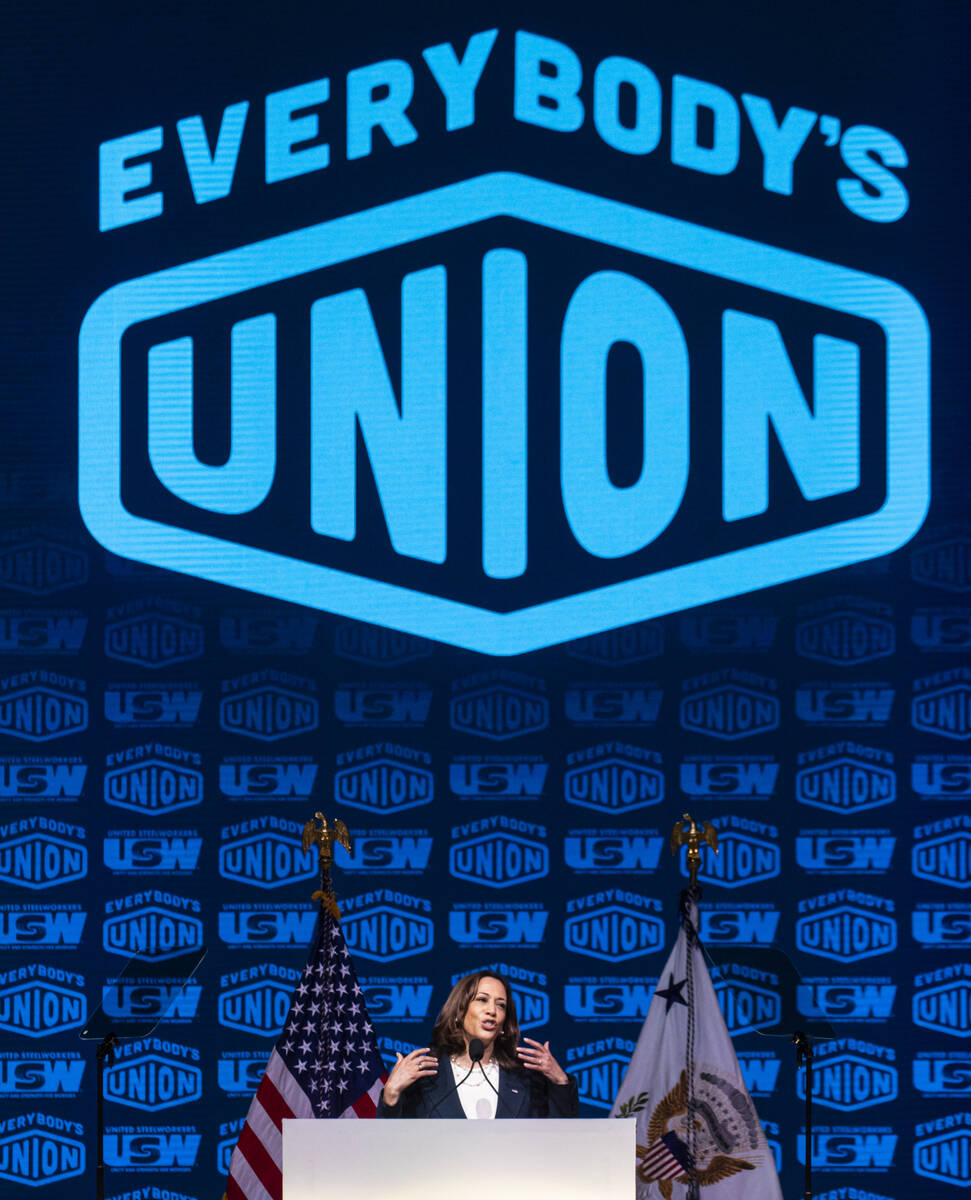 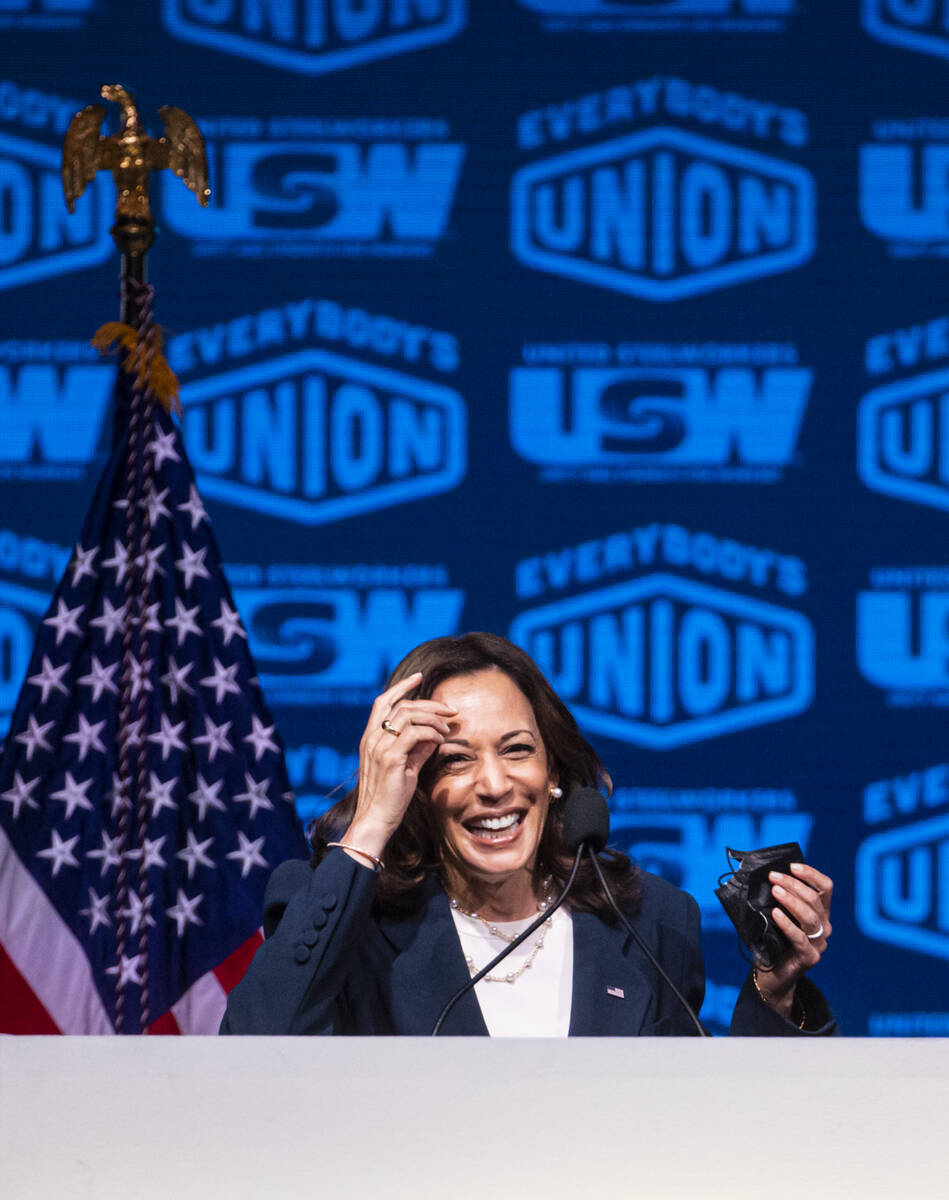 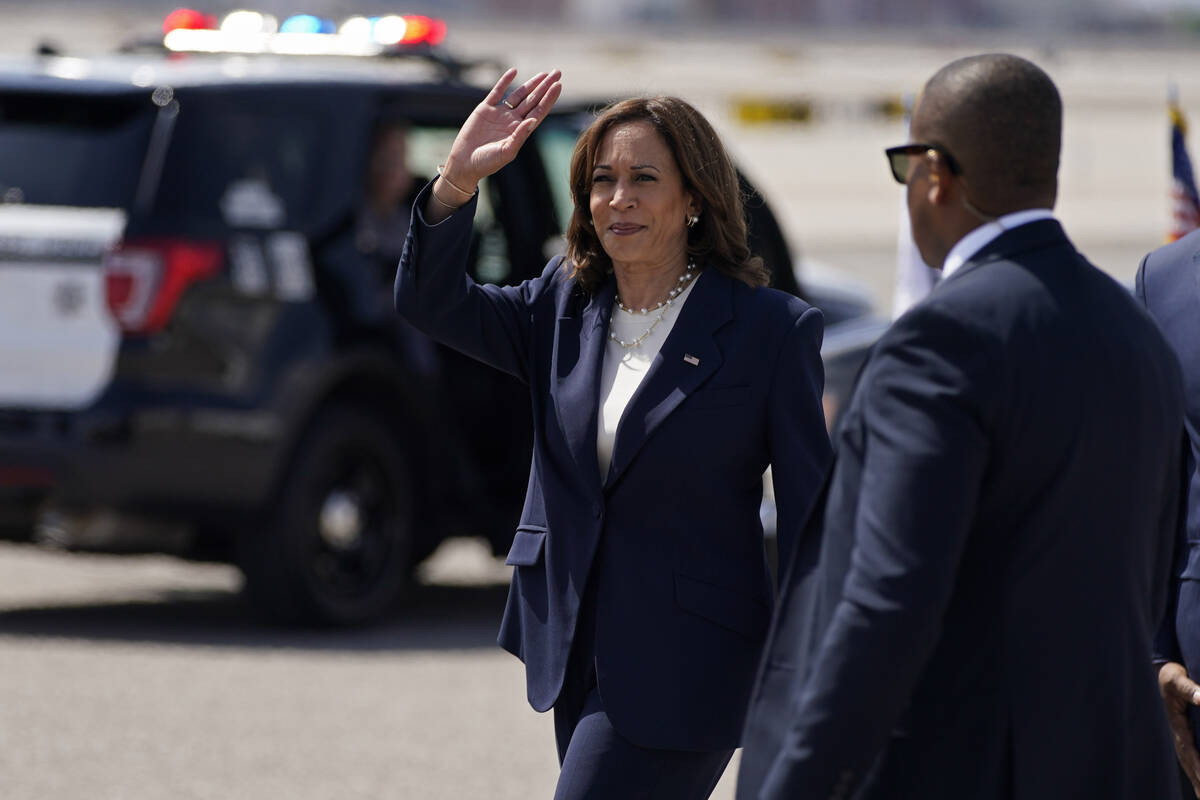 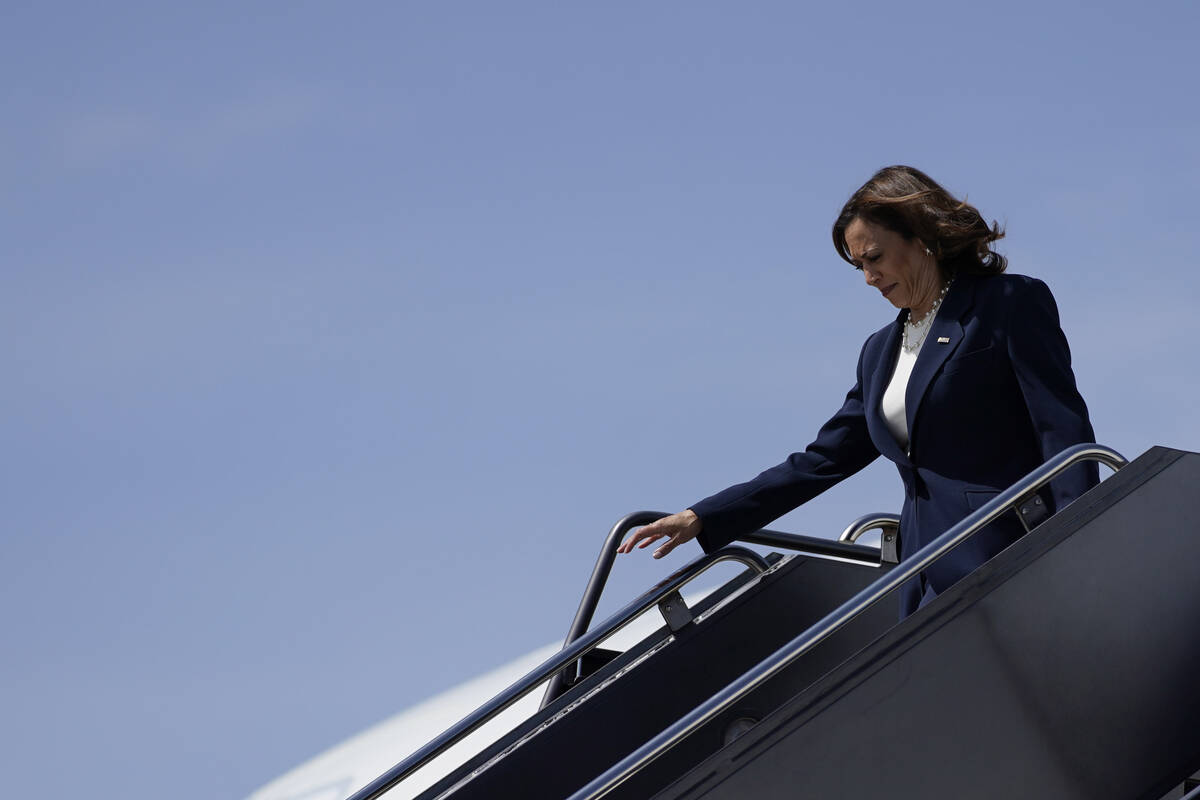 Vice President Kamala Harris touted administration accomplishments including the passage of a bill to combat inflation and another to make computer chips in the United States during a daylong visit to Las Vegas on Wednesday.

In the morning, Harris addressed the 2022 Constitutional Convention of the United Steelworkers at the MGM Grand Convention Center. Her visit came amid a year of rising union support and membership nationwide, with union drives in Amazon warehouses and Starbucks locations garnering national attention.

She praised the passage of new legislation in Congress: the CHIPS Act, which will expand U.S. computer chip manufacturing, and the Inflation Reduction Act, an omnibus bill with massive ramifications for the fight against climate change and lowering health care costs. That legislation includes raising taxes on the richest Americans and closing tax loopholes for large businesses.

“Our nation’s largest corporations will now start to pay their fair share,” she said to a standing ovation.

At a roundtable with local lawmakers later in the day, Harris also praised her administration’s work in turning around the nation’s economy post-pandemic. There was no additional inflation in July, gas prices are falling nationally and unemployment is at a 50-year low, she said.

“We are delivering for the American people,” Harris said.

Inflation remains high, although it fell from 9.1 percent to 8.5 percent last month.

The roundtable featured eight Nevada lawmakers, including Attorney General Aaron Ford and Senate Majority Leader Nicole Cannizzaro. The group’s discussion focused on reproductive rights in the state following the Supreme Court’s decision in the case of Dobbs v. Jackson Women’s Health Organization to effectively overturn abortion rights on the federal level and allow states to pass laws regarding the procedure.

“The United States Supreme Court, with the Dobbs decision, took a constitutional right that had been recognized from the people of America. From the women of America,” she said. “What we have seen around the country are extremist, so-called leaders passing laws to punish women, to criminalize healthcare providers.”

Abortion remains legal and accessible in Nevada following the Supreme Court decision, thanks to a voter-affirmed provision embedded in state law. Elsewhere, states have passed laws banning the procedure in all cases, including if a pregnancy is the result of rape or incest. Last month, a 10-year-old girl from Ohio was forced to cross state lines to Indiana to receive an abortion after she was raped in a case which garnered nation attention.

Harris called state laws like those in Ohio, “abhorrent.”

“Our nation was founded on certain fundamental principles including the principles of freedom and liberty,” she said. “To stand for the proposition that the government should not interfere in the most intimate, private decision a person can make about their body and their future… does not require one to abandon their faith or their beliefs.”

The vice president ended her statement with a warning about other rights that she believes may be under attack soon. In his Dobbs concurring opinion, Supreme Court Justice Clarence Thomas mentioned that other court cases regarding civil rights should also be reconsidered.

“This, in many ways, sadly just may be the beginning,” she said. “Clarence Thomas… said the quiet part out loud. Talking about other fundamental rights that we thought were long-settled may be up for debate or even attack. Including the right to have access to contraception and same-sex marriage. So everyone is impacted by this decision.”

Republicans — who voted en masse against the Senate bill, contending it would do little to ease inflation — greeted Harris’ visit with disdain.

“Vice President Harris’ visit to the Steelworkers Union convention today is a slap in the face to hardworking Nevadans who her party just voted to raise taxes on during a recession and yet another attempt to distract voters from the issues affecting them every day,” said Republican National Committee spokesperson Hallie Balch in a statement. “The VP can drop in and make guest appearances all she wants, but the Biden administration and Nevada Democrats’ failed records speak much louder than any speech she could give.”

And Republican U.S. Senate nominee Adam Laxalt criticized his Democratic opponent, U.S. Sen. Catherine Cortez Masto, saying the visit would not improve her chances in November. Cortez Masto did not appear with the vice president Wednesday and Harris did not mention the race explicitly in her comments.

“Struggling with their record-low approval ratings, the Biden-Harris Administration is doing everything they can to ensure that Democrats have another two years to keep our borders open, dismantle American energy, plunge our economy further into recession, and push radical leftist indoctrination in our schools,” Laxalt said in a statement. “Kamala Harris hopes her glamorous visit with Masto will distract Nevadan voters from the real issues: inflation is at 40-year high, weekly earnings for middle class families have been down for 16 consecutive months, gas and diesel prices remain unaffordable, and consumer confidence is near its record low.”

Cortez Masto’s campaign was unfazed by Laxalt’s remarks, launching their own attacks back at the former state attorney general.

“While Senator Cortez Masto works to lower costs for Nevada families, Adam Laxalt is getting rich working for a longtime (Washington) D.C. lobbyist at a firm representing the big oil companies squeezing Nevadans at the pump,” said spokesperson Sigalle Reshef in a statement. “Laxalt’s out for himself, not Nevada.”