Barraged by hundreds of sex-abuse lawsuits, the Boy Scouts of America filed for bankruptcy protection Tuesday in hopes of working out a potentially mammoth victim compensation plan that will allow the hallowed, 110-year-old organization to carry on.

The Chapter 11 filing in federal bankruptcy court in Wilmington, Delaware, sets in motion what could be one of the biggest, most complex bankruptcies ever seen. Scores of lawyers are seeking settlements on behalf of several thousand men who say they were molested as scouts by scoutmasters or other leaders decades ago but are only now eligible to sue because of recent changes in their states’ statute-of-limitations laws.

By going to bankruptcy court, the Scouts can put those lawsuits on hold for now. But ultimately they could be forced to sell off some of their vast property holdings, including campgrounds and hiking trails, to raise money for a compensation fund that could surpass a billion dollars.

“Scouting programs will continue throughout this process and for many years to come,” said Evan Roberts, a spokesman for the Scouts. “Local councils are not filing for bankruptcy because they are legally separate and distinct organizations.”“

The Boy Scouts are just the latest major American institution to face a heavy price over sexual abuse. Roman Catholic dioceses across the country and schools such as Penn State and Michigan State have paid out hundreds of millions of dollars in recent years.

The bankruptcy represents a painful turn for an organization that has been a pillar of American civic life for generations and a training ground for future leaders. Achieving the rank of Eagle Scout has long been a proud accomplishment that politicians, business leaders, astronauts and others put on their resumes and in their official biographies.

The Boy Scouts’ finances have been strained in recent years by declining membership and sex-abuse settlements.

The number of youths taking part in scouting has dropped below 2 million, down from more than 4 million in peak years of the 1970s. The organization has tried to counter the decline by admitting girls, but its membership rolls took a big hit Jan. 1 when The Church of Jesus Christ of Latter-day Saints — for decades a major sponsor of Boy Scout units — cut ties and withdrew more than 400,000 scouts in favor of programs of its own.

The financial outlook had worsened last year after New York, Arizona, New Jersey and California passed laws making it easier for victims of long-ago abuse to file claims. Teams of lawyers across the U.S. have been signing up clients by the hundreds to sue the Boy Scouts.

Most of the newly surfacing cases date to the 1960s, ’70s and ’80s; the organization says there were only five known abuse victims in 2018. The Boy Scouts credit the change to an array of prevention policies adopted since the mid-1980s, including mandatory criminal background checks and abuse-prevention training for all staff and volunteers, and a rule that two or more adult leaders be present during all activities.

In many ways, the crisis parallels the one facing the Catholic Church in the U.S. Both institutions boast of major progress over recent decades in combating abuse. whether by priests or scout leaders, but both face many lawsuits alleging negligence and cover-ups, mostly decades ago.

Among the matters to be addressed in bankruptcy court: the fate of the Boy Scouts’ assets; the extent to which the organization’s insurance will help cover compensation; and whether assets of the Scouts’ 261 local councils will be added to the fund.

“There are a lot of very angry, resentful men out there who will not allow the Boy Scouts to get away without saying what all their assets are,” said lawyer Paul Mones, who represents numerous clients suing the BSA. “They want no stone unturned.”

Amid the crush of lawsuits, the Scouts recently mortgaged the major properties owned by the national leadership, including the headquarters in Irving, Texas, and the 140,000-acre Philmont Ranch in New Mexico, to help secure a line of credit.

Founded in 1910, the Boy Scouts have kept confidential files since the 1920s listing staff and volunteers implicated in sexual abuse, for the avowed purpose of keeping predators away from youth. According to a court deposition, the files as of January listed 7,819 suspected abusers and 12,254 victims.

Until last spring, the organization had insisted it never knowingly allowed a predator to work with youths. But in May, The Associated Press reported that attorneys for abuse victims had identified multiple cases in which known predators were allowed to return to leadership posts. The next day, Boy Scouts chief executive Mike Surbaugh wrote to a congressional committee, acknowledging the group’s previous claim was untrue.

James Kretschmer of Houston, among the many men suing for alleged abuse, says he was molested by a Scout leader over several months in the mid-1970s in the Spokane, Washington, area. Regarding the bankruptcy, he said, “It is a shame because at its core and what it was supposed to be, the Boy Scouts is a beautiful organization.”

“But you know, anything can be corrupted,” he added. “And if they’re not going to protect the people that they’ve entrusted with the children, then shut it down and move on.”

Ahead of the Chapter 11 filing, lawyers said that because of the organization’s 50-state presence, as well as its ties to churches and civic groups that sponsor scout troops, a bankruptcy by the Boy Scouts would be unprecedented in its complexity. It would be national in scope, unlike the various Catholic Church bankruptcy cases, which have unfolded diocese by diocese.

“A Boy Scout bankruptcy would be bigger in scale than any other child abuse bankruptcy we’ve ever seen,” said Seattle-based attorney Mike Pfau, whose firm is representing scores of men nationwide alleging they were abused as Boy Scouts.

Illustrating the depth of its problems, the organization in 2018 sued six of its insurers for refusing to cover its sex abuse liabilities. The insurers said their obligation was void because the Scouts refused to take effective preventive measures such as warning parents that boys might be abused. 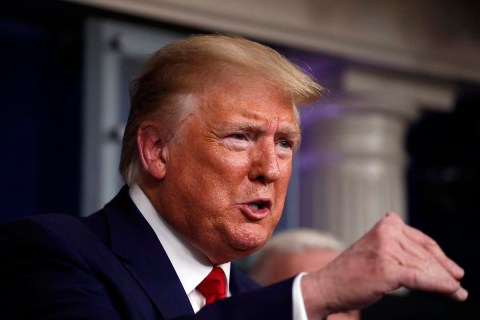 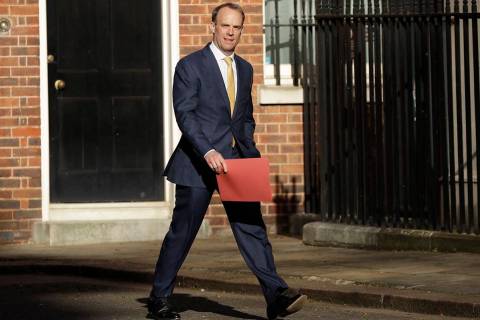 British Prime Minister Boris Johnson spent the night in an intensive care unit but is not on a ventilator. Pressure grew on the government to release more details on his condition. 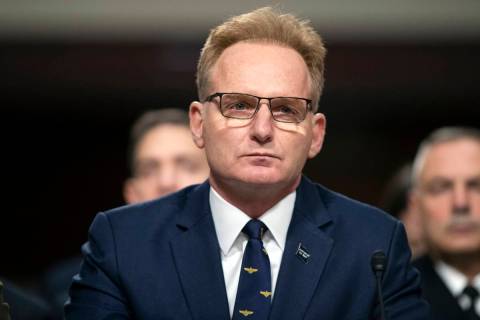 President Donald Trump said Capt. Brett E. Crozier made a mistake when he sent a memo to several people laying out his concerns about the crew and the virus. 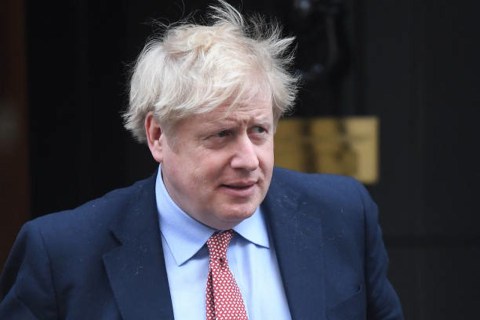 British Prime Minister Boris Johnson was moved to the intensive care unit of a London hospital after his coronavirus symptoms worsened Monday. 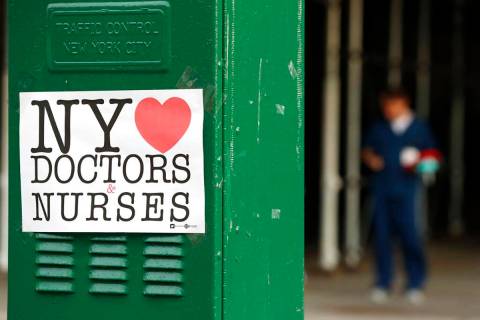 More than 9,600 people have died of the virus in the United States, and it leads the world in confirmed infections at more than 337,000. 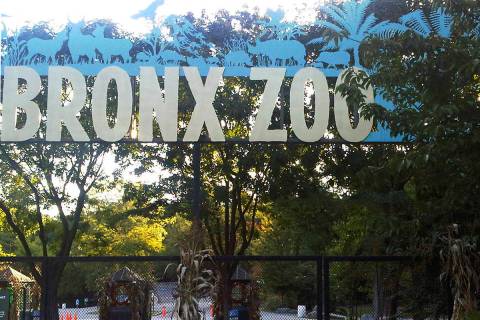 The 4-year-old Malayan tiger, and six other tigers and lions that have also fallen ill, are believed to have been infected by a zoo employee. 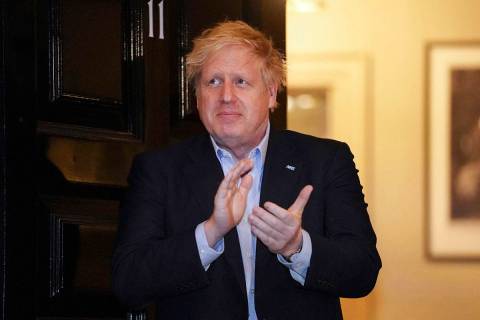 Downing St. said Sunday the hospitalization is a “precautionary step” and he remains in charge of the government. 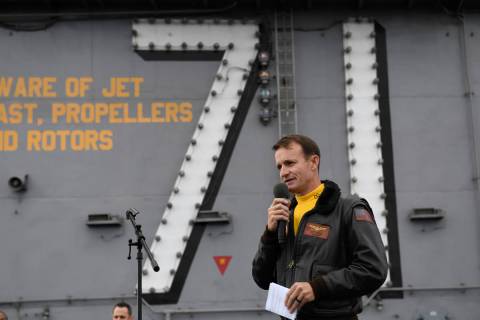 His firing comes amid pressure on the military as it seeks to step up its response to the coronavirus outbreak. 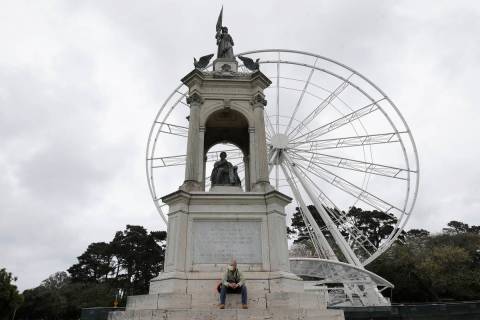 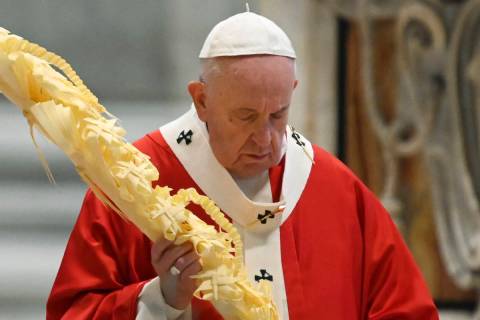 Wearing red robes to symbolize the blood shed by Jesus in the hours of his crucifix, Francis blessed braided palms.