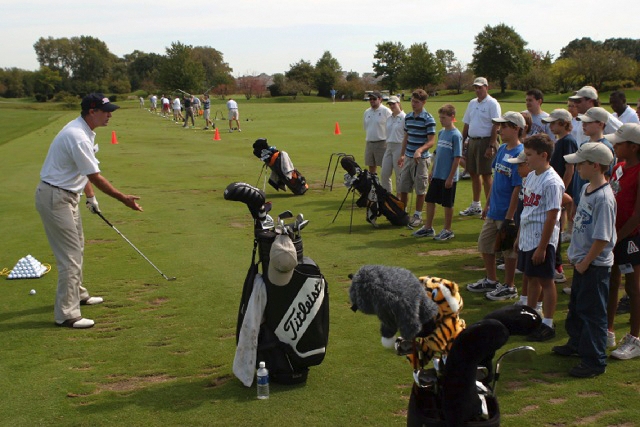 Perry Parker, left, is the golf spokesman for the Junior National Championship. He travels the country giving clinics to kids with bleeding disorders. On May 17, he is planning the Golf 4 Kids Tournament at TPC Las Vegas, 9851 Canyon Run Drive. The tournament benefits the Cure 4 the Kids Foundation and the Nevada chapter of the National Hemophilia Foundation.

Editor’s note: This story was changed to reflect the correct location of the event.

For those who have spent any time in the golf world, this is obvious: There are a bunch of outstanding folks in the game. Be it the general managers, golf pros, pro shop people, bag personnel, restaurant staff or even the beverage cart attendants, everyone seems to love their job and is dedicated to making your day on the course a great one.

One such guy is Perry Parker. He’s the guy behind Perry Parker Golf, a teaching facility in Mission Viejo, Calif. In addition to a long list of impressive credentials, Perry has Hemophilia A, the most common type of hemophilia. It’s also genetic. It’s known as Factor VIII in which one of the proteins needed to form blood clots is missing or reduced. A person with hemophilia doesn’t bleed harder or faster, just longer. It’s the more traumatic injuries that can cause big trouble.

“My mother had me tested as a baby because it’s in the family,” Perry said. “Baseball and basketball were the sports that I loved, but a major injury in Little League baseball brought those sports to an end.”

Perry, who is the golf spokesman for the Junior National Championship, travels the country giving clinics and tips on keeping muscles healthy and joints strong to kids with bleeding disorders. On May 17, he plans to be in town for the Golf 4 Kids Tournament, taking place at TPC Las Vegas, 9851 Canyon Run Drive. The tournament benefits the Cure 4 the Kids Foundation and the Nevada chapter of the National Hemophilia Foundation.

Together, Perry and CSL Behring, the drug company that produces the medicine Perry takes to control his disorder, created the Gettin’ In the Game Junior National Championship program, a national tour for kids affected with bleeding disorders and their families. The tour consists of a junior golf championship and a baseball skills competition. All the athletes involved have a bleeding disorder.

“It’s probably the most rewarding thing I’ve ever done. You can’t believe the impact this has on the kids and the parents,” Perry said of the program he has been with since 2000. “When children with a bleeding disorder believe in themselves, great things can happen.”

Aside from his work with the tournament, Perry is a world-class instructor. He earned a golf scholarship to the University of California at Irvine, where he was All-Big West Conference in 1985 and 1986. He later joined the staff at Irvine and worked there as an assistant golf coach until 1991.

Over the years, he honed his game by playing in local professional events. Winning more than 30 pro tournaments, he then qualified for the Canadian Tour in 1991. He won his first Canadian Tour event in 1991 in Saskatoon, Saskatchewan, and went on to win four more times. Perry played the Nike Tour from 1993 to 1997; his highest finish was a tie for third at the Tri-Cities Washington.

“My dad taught me. Dad was a scratch golfer, and we played often,” he said. He also played with his grandmother on a local nine-hole layout. “My grandmother loved the game, too.”

His proudest achievement as a pro golfer is having played in three U.S. Opens (1992, 1997 and 1998). He made the cut in 1997 at Congressional Country Club in Bethesda, Md. In fact, he played with Tiger Woods during an Open qualifier and made it — Tiger did not. He’s had 10 holes in one, shot 29 for nine holes four times and has a best competitive round of 62. He’s also found time to play on the Asian Tour, the Australasian Tour, the Japanese Tour, the PGA Tour and a host of mini-tours in the United States.

If you’re looking for something to do this month, remember Perry and think of checking out the JNC tournament. There is a terrific list of prizes, but the kicker may be the $1,000,000 Hole in One contest. While you’re there, say hi to Perry and ask him to tell you that story about Tiger.