By day, he’s a physical education teacher at Bailey Elementary School. He loves golf and established an after-school golf program for the kids there. Participants grew to 140 youth golfers last year. Mike takes part in an intramural golf program for the kids at Stallion Mountain Golf Club. He conducts golf clinics for the First Tee program at Wildhorse Golf Club, plays once a week and carries a five handicap. Yep, an all-around good guy.

He’s also a world champion. What, you ask?

Mike won the Legends Division of the 2013 RE/MAX World Long Drive Championship Oct. 30 in Mesquite. He had to drive the ball 340 yards to win the title against a field of 32 long hitters. He had to outdistance basketball legend Rick Barry to win.

“Boy, was I happy to win that,” Mike quietly said of his victory.

Mike has been entering the long-drive competition since 1994. He’s come close a couple of times.

The Legends Division is for competitors 60 or older. Thirty-two players ante up $800 each to enter. Players must have a verified drive of 275 yards to qualify. The first day sees each golfer play 12 rounds of six balls. It’s a double-elimination tournament, with winners advancing and two-time losers being eliminated. At the end of the day, four golfers, including Mike, advanced to the semifinals the next day.

Barry advanced to the finals by beating Joakim Boltenstern 323 yards to 318. Mike was paired against veteran Steve Griffith in the second semifinal. Each golfer had six balls to hit.

Mike prevailed 342 yards to 336 to set up the championship final against Barry. Rick shot first, hitting his first five tries out of bounds, and then nailed a whopper of 338 yards on his final try. Mike knew what he had to do. This time, he turned the tables and, prevailed, whacking it 340 yards.

“Rick was a very gracious loser, a tremendous competitor, but he hated losing. I could tell that by the look on his face,” Mike said. Rick had won the Masters Division for players 65 or older earlier in the competition.

“But what I’m really looking forward to is the championship ring that goes along with the victory. It’ll be my Super Bowl ring,” he said.

Mike uses a Krank club head of 6-degree loft and a House of Forged shaft with a stiff rating.

Mike receives some sponsorship help from both companies.

The Long Drivers of America sanctions the event and provides the balls used in competition. Top Flite has been the official ball in competition for many years.

So how did Mike celebrate?

“My wife and I drove to New Mexico to visit family. Then we drove to Newport Beach for more family. The best was buying presents for my three grandkids. That was fun.”

“Not much,” Mike said. “A few friends called and congratulated me.

“I’d love to go to clinics and golf tournaments and meet fellow golf fans. You know I love golf.”

“Years ago, an instructor said to me, ‘You got airmail, but there’s no postage on it.’ ”

“To improve my short game, “ Mike said with a smile. 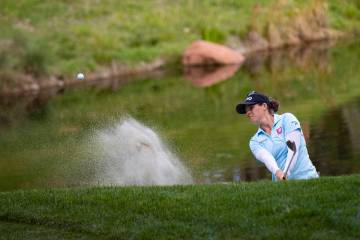 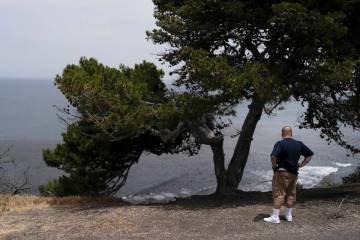 Christopher Bulus’ incredible journey from Nigeria to UNLV
Don't miss the big stories. Like us on Facebook.
THE LATEST