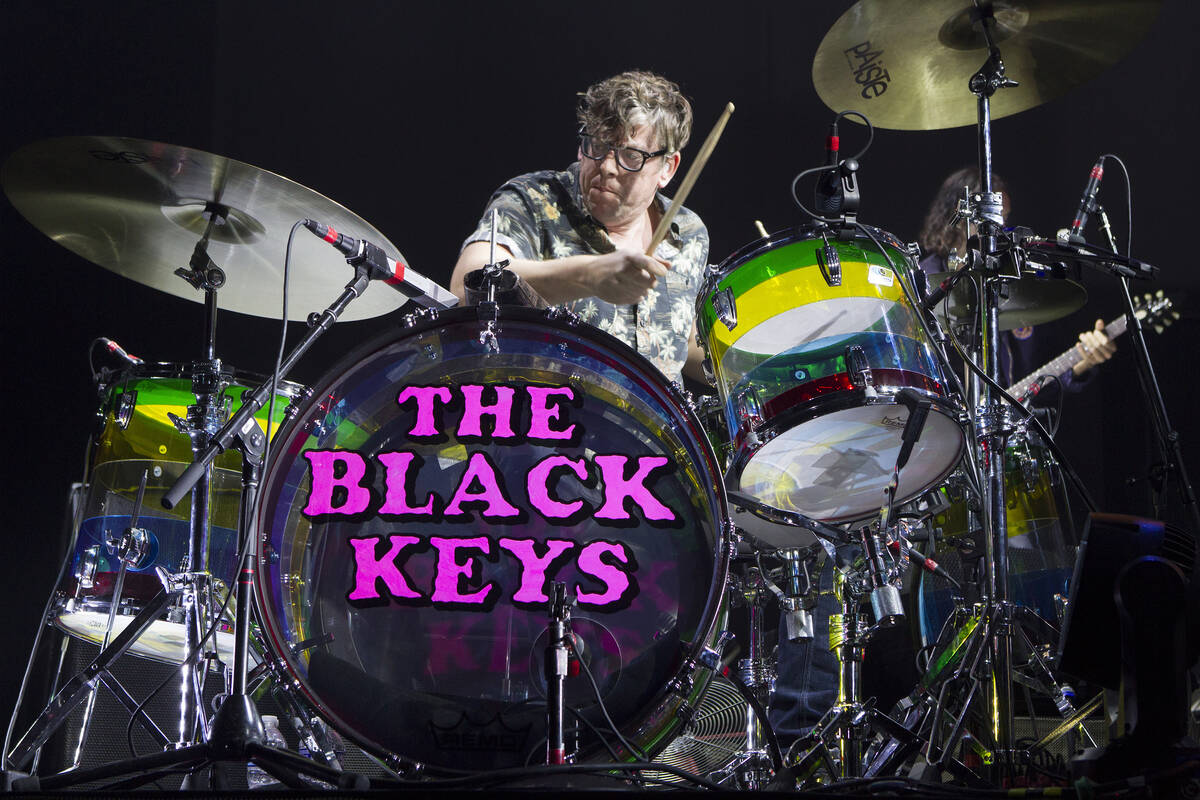 Patrick Carney of The Black Keys performs in concert during their "Let's Rock Tour" at The Wells Fargo Center on Monday, Oct. 14, 2019, in Philadelphia. (Photo by Owen Sweeney/Invision/AP)

The last time they launched a tour in town, the Black Keys would have ripped the roof off the place had there been one: The blues-rock badasses began their roadwork for previous album “Let’s Rock” with a feisty headlining slot at Life is Beautiful 2019. Back with a new record, the hip-swiveling, hard-charging “Dropout Boogie,” the Black Keys are once again starting their first trek in support of the album right here in Vegas, at 7 p.m. Saturday at the MGM Grand Garden. Tickets start at $39.50; axs.com.

The second Las Vegas location of the Hello Kitty Cafe, in addition to the outpost at The Park, will debut at Fashion Show mall at 11 a.m. Friday. The cafe will sell exclusive merch and a sweet selection of treats, including soft-serve ice cream in a Hello Kitty-shaped waffle cone. Along with a special appearance by Hello Kitty herself at the grand opening, the cafe will offer giveaways to the first 100 guests and a small gift with any purchase, while supplies last.

Country music singer Gary Allan is right where he needs to be, hitting town this weekend as he continues his “Ruthless” tour. Since the release of his debut record in 1996, the 54-year-old Allan has sold over 8 million albums and 10 million tracks and charted five No. 1 hits. See him at 8 p.m. Saturday at the M Resort. Tickets start at $23; ticketmaster.com.

Through Sept. 4, The Capital Grille in Fashion Show mall is offering its summer wine event, The Generous Pour, featuring red, white and rosé pairings from Antinori, the legendary Italian vintners. The six wines are $32 with the purchase of any lunch or dinner main course. The first three have been chosen to pair with a soup, salad or appetizer, the second three with an entrée. Restaurant staff will assist with pairings. Take-home packs in two, three or six bottles are $100-250. Visit thecapitalgrille.com/home.

Find the missing piece at the Jigsaw Puzzle International Convention, offering three days of fun-filled, all-ages events including competitions, exhibitions, influencer meet-and-greets, a charity jigsaw puzzle exchange and a chance to set a Guinness world record for completing the world’s largest jigsaw puzzle. The festivities run from 10 a.m. to 6 p.m. Friday and Saturday and 10 a.m. to 5 p.m. Sunday at the Las Vegas Convention Center. Tickets start at $29.95; jpic.club.

Enjoy a night of laughter as funnyman Chris Tucker, star of the “Rush Hour” series, “Friday” and many other memorable roles, returns to the Encore Theater at Wynn Las Vegas this weekend after a two-year hiatus. Tucker brings his hilarious impersonations and inside knowledge of Hollywood to the stand-up stage at 8 p.m. Friday and Saturday. Tickets start at $65; ticketmaster.com.

Take all the mirth of the Black Death and set it to a beat and there you have the general vibe of Primitive Man. The brutally bleak doom metallers top one of the heaviest lineups of the summer when they hit town like a battering ram alongside Jarhead Fertilizer, Elizabeth Colourwheel, Body Void, Spirit Possession and Vegas’ own God’s America at 8 p.m. Tuesday at Backstage Bar & Billiards, 601 E. Fremont St. Tickets are $18; eventbrite.com.

After Deloris Van Cartier witnesses a murder, she’s placed in protective custody in a convent in Super Summer Theatre’s production of “Sister Act.” The musical, based on the 1992 Whoopi Goldberg comedy, features music by EGOT winner Alan Menken (“Beauty and the Beast,” “Little Shop of Horrors”). See it at 8:05 p.m. Wednesdays through Saturdays through Aug. 6 at Spring Mountain Ranch State Park. Tickets start at $17.50 at supersummertheatre.org.

Since the defeat of Thanos, Thor (Chris Hemsworth) has been living the good life as a retired god. Valkyrie (Tessa Thompson) remains king while Jane Foster (Natalie Portman) wields the magical hammer, Mjolnir, as the Mighty Thor. When the galactic killer known as Gorr the God Butcher (Christian Bale) seeks to live up to his name, though, Thor turns to those friends, plus Korg (director Taika Waititi) and the Guardians of the Galaxy, for help in “Thor: Love and Thunder.”

See the future of the league — as well as some of the present, trying to hold onto their jobs or jump-start their careers — as all 30 teams return for the NBA Summer League. The 2019 edition, the final one before the pandemic, drew nearly 140,000 fans — most of them seemingly trying to crowd in and find a seat whenever the Lakers played. See as many as nine games a day, now through July 17, in the Thomas & Mack Center and Cox Pavilion. Tickets start at $40 at unlvtickets.com.