In boxing, swabs are commonplace. Cutmen use them to treat cuts over the eyes and staunch nosebleeds. Whenever a telecast cuts to the action in the corner, you’ll see a trainer swabbing a fighter’s face, like a painter working with a Mahl stick.

Before the coronavirus pandemic, swabs were intended only for the fighters and their corners. But today, swabs are for everyone.

This was clear a couple of weeks ago at the Bubble at the MGM Grand, where Top Rank Boxing and ESPN presented 13 fight cards over six weeks from June 9-July 21. The most recent televised event was highlighted by Oscar Valdez (who has his own line of customized “OV” face covers) battering Jayson Vélez in a 10th-round TKO.

The Bubble setup for these fights is equal parts Vegas resort, sports venue and medical facility. The fighters, their handlers, all staff and any visitors to the venue are required to take a throat-swab test in a repurposed hotel suite the night before the event. This goes for everyone, including (and maybe especially) for the man atop the boxing hierarchy, Top Rank founder Bob Arum.

“I have 13 tests, with a zero,” the 88-year-old Arum said during a chat inside the Bubble’s socially distanced work center, across the hall from the boxing facility. “I am undefeated.”

But typically, those who are tested are sent to one of 170 guest rooms reserved on the hotel’s 12th floor, reserved exclusively for Bubble tests and quarantines. Signs trumpeting COVID-safety protocol line the hallways — “You may not leave the bubble!” is one. Fighters and corners are told not to ride public elevators.

Above all, there is no commiserating with anyone outside the Bubble. You’re either in the Convention Center or on the 12th floor. At every turn you are reminded where to stand, where not to stand, to wear a mask, and where to be swabbed.

Remarkably, results are provided within eight hours, sometimes as quickly as four hours. You are told to wait for a phone call in the morning. You don’t want the phone to ring. That means you are positive, and arrangements will be made to immediately remove you safely from the hotel.

If you are not COVID-positive, you receive a wristband allowing access, by using a service elevator and a Top Rank Boxing-branded shuttle, to the Convention Center. In the Bubble, you instinctively check the wrists of everyone around you making sure they are also properly banded.

Without such rapid testing turnaround, the Bubble telecasts would not be possible. On-site testing is provided by Community Ambulance medical staffers. University Medical Center handles the lab work. Top Rank is proud of its COVID testing record for the Bubble events.

Officially, there were 19 positives among 2,359 tests conducted over the series’ 6½-week run.

Those stats indicate total tests, not the total number of individuals tested, as the dedicated staff on-site was tested twice per week. All positives were from fighters or their camps. At the July 21 card, heavyweight Kingsley Ibeh and super middleweight Raphael Igbokwe both tested positive the night before the bout and were scratched. That cut the number of fights from seven to five.

But even with a few late cancellations, the 13 ESPN fight telecasts went on as scheduled, with the team sequestered at the MGM Grand forming a kind of community. A total of 75 individuals were needed to stage the events, and by the night of the fights, some 150 crew members and officials were ensconced inside the Bubble.

Matt Kelly, a freelance camera operator for the past 17 years, is among those who spent 45 straight days inside the MGM’s restricted quarters. Kelly has worked the past three Olympic games in Sochi, Rio and South Korea.

Nothing compares to his time in the Bubble.

“I did curling at the Winter Olympics, and we had the most days of competition over there, and in Sochi, I actually did the Olympics, came home for a week, and went back and did the Paralympics,” Kelly said. “So I’m used to being gone for some time, but this is the longest straight-through time I’ve gone through, by far.”

Kelly put it all in logistic perspective.

But uniformly, those on staff say that they are grateful for the work. The MGM guest rooms held aside are spotless, of course. The food delivered twice a day to the Bubble’s retrofitted cafe, wrapped sandwiches and salads and the like, serves the staff fine.

Across from the ring, the MGM has set up what seems a scaled-back version of Park Promenade, with a giant Jenga game, Plinko, horseshoes, beer pong (inevitably) and table tennis. Those familiar with the activity report wagering on these events, upward of $10 per game.

Members of the staff are continually asked, “How are you keeping sane?”

“Who said I was sane?” said Katie Neff, Top Rank’s contracted event access manager. “We’ve had two parties this week, one an ’80s theme and one that was for my birthday. That helped.”

Neff, a former member of the Second City comedy troupe at the Flamingo in 2006, resurrected one of her obnoxious characters, Basia the Cocktail Waitress, to fire up the troops.

Also, some Bubble inhabitants have agreed to use a hand signal, reaching above their masks and touching their noses, when the stress becomes unbearable.

“We haven’t had to use it yet,” said Ceatta Bogataj, director of event operations. “But we’ve been close.”

Between them, Neff and Bogataj have worked hundreds of title fights, across the country and internationally, including the Manny Pacquiao-Brandon Rios card at The Venetian in Macau in 2013.

“This has been unique. It’s such a grand task,” Bogataj said. “It really seemed unachievable. We really had to be united so we didn’t reach our limit.”

Around the venue, the setup shows meticulous planning. Rather than the usual ringside setup of seats tightly packed around all four corners, chairs at the Bubble are set 6 feet apart. The Top Rank founder’s VIP position at ringside looks like Arum Island.

“The truth is, the hard work was all done ahead of time,” Jacobs said. “We spent six weeks, 24/7, before we started, going through every single possible detail. We have a checklist of 250 items, and have added 120 that are only COVID-related, with testing, biohazard material canisters, everything you can think of. Now it’s almost routine.”

Top Rank President Todd duBoef even made a late call on the venue’s aesthetics for TV. This was a totally understandable move if you have seen the MGM Grand’s carpeting, which guests find entertaining but is not great for broadcasts.

“They’re showing me pictures, when I wasn’t here early on, and I’m like, ‘That carpet is so loud, we’ve got to get some new carpet in there,’ ” duBoef said. “This was like the day before we started. We bought the carpet just hours before the thing started (laughs). But this is just how everybody had to work together.”

Though successful on TV, there is no escaping the comparative quiet of live boxing in front of a few dozen onlookers.

“With nobody there, it’s a little surreal. There’s no energy coming your way from fans, when you’re used to sports fans who are loud, obnoxious, crazy, ruthless,” said Mark Shunock, the Top Rank’s ring announcer and the well-known Vegas entertainer who runs The Space performance venue. “You really have to be prepared, we go through each introduction line-by-line to make sure it’s right. But it is so different. I don’t know how the fighters deal with not having that reaction.”

The action in the ring plays out like a dressed-up sparring session, but with greater consequences. Valdez performed an expert dismantling of Velez — to the shouts of his corner, and a thumb’s-up from Arum.

“It definitely felt like an actual fight because there’s a winner and loser, and obviously I am a competitive guy fighting to win,” Valdez said after his KO over Velez. “The only difference is, sometimes fans help pick you up and perform better. I missed the fans cheering, hearing the ‘oohs!’ and ‘aaahs!’ I had my opponent down three times, I definitely missed the crowd cheering.”

Still, the fighter said, “I’m just blessed to be able to step into the ring during a pandemic. No other promoters are doing this. It puts food on the table for my family.”

The series’ Aug. 22 return is just a restart of what is expected to be an ongoing Top Rank/ESPN series through the fall and even into December. All sides are interested in putting on bigger fights, with championships on the line, in the Bubble.

“To do big fights, with spectators, is too aspirational,” Arum said. “And yet, these fights have to happen.”

He singles out the Teófimo López-Vasily Lomachenko lightweight championship bout set for Oct. 3.

“We still want to keep that date,” Arum said, “but now it’s a Bubble fight.”

George Kliavkoff, the president of entertainment and sports at MGM Resorts International, says the company is uniquely outfitted to host Bubble events at other venues across its properties.

“We’ve explored all of those, and you know that we were in the running to have the NHL Playoffs in the bubble at T-Mobile Arena,” Kliavkoff said. “… We can export the Bubble concept and protocols to any of our properties, on any combination of sporting event location and sleeping rooms. That’s not a restriction.”

Addressing major fights in the Bubble at the MGM Grand, Kliavkoff said, “It’s a constant conversation about what’s the right time to schedule a big fight. That is the balancing act, making sure we have the fights in their normal course, so they’re not sitting out too long, while at the same time not wanting to deprive them of the economics that you get when you have fans in the stands.”

That means a return of the Bubble concept, and community, in the foreseeable future. Arum, a driving force in the sport for decades, continues to cut a path into the unknown. 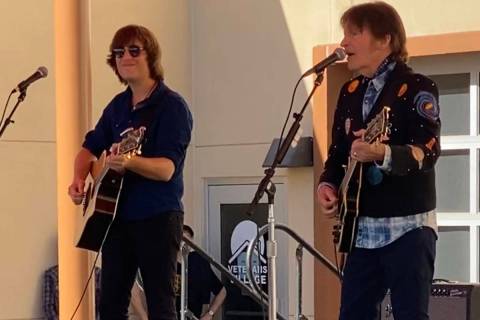 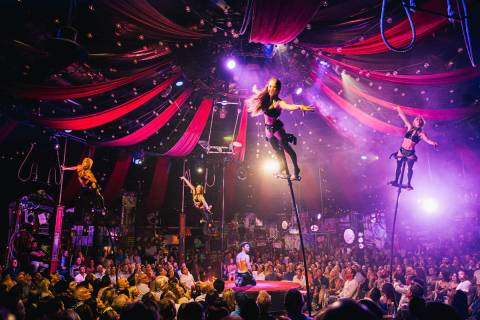 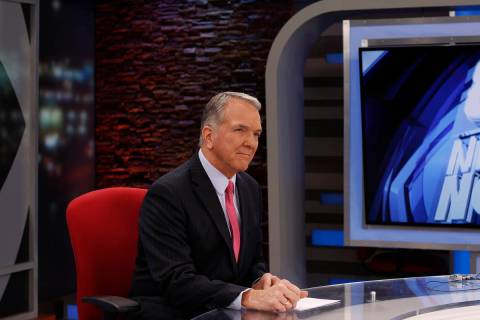 Dave Courvoisier says of his return to Las Vegas, “I found that I had a little gas left in the tank.” 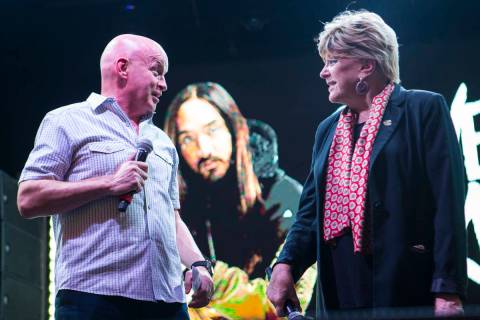 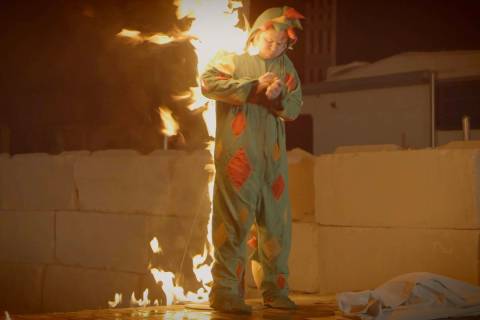 Piff the Magic Dragon says of his winning video: “I don’t work with fire. And I can tell you why, because it is very hot and very uncomfortable.” 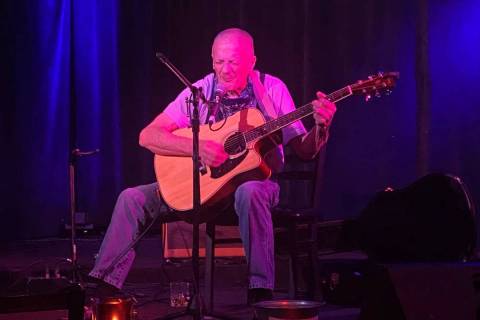 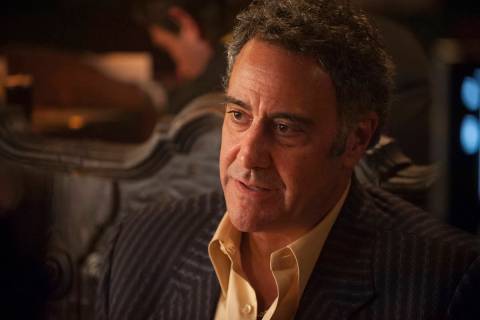 Brad Garrett, a six-time guest on “The Ellen DeGeneres Show,” has called out the talk-show host. 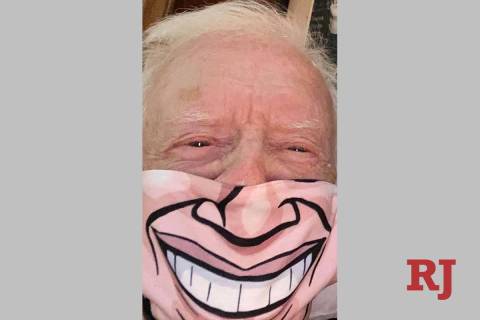 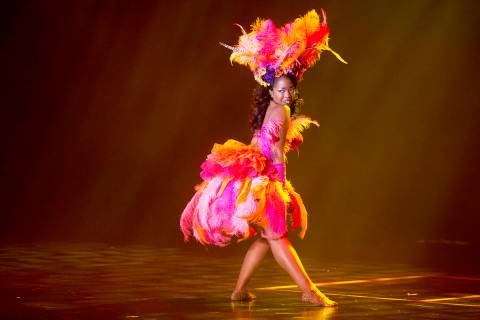 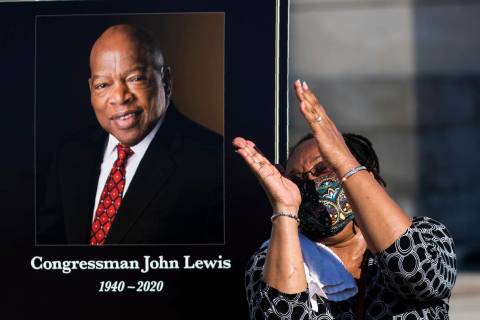 John Lewis submitted his essay to The New York Times on July 15, two days before his death.