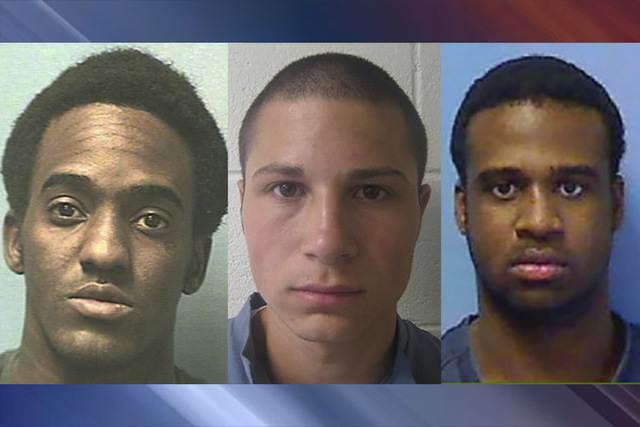 Three of the four men indicted in the fatal shooting of Aric Brill in 2009. From left to right: Devonte Wash, Nadin Hiko and Devon Phillips. (Nevada Department of Corrections) 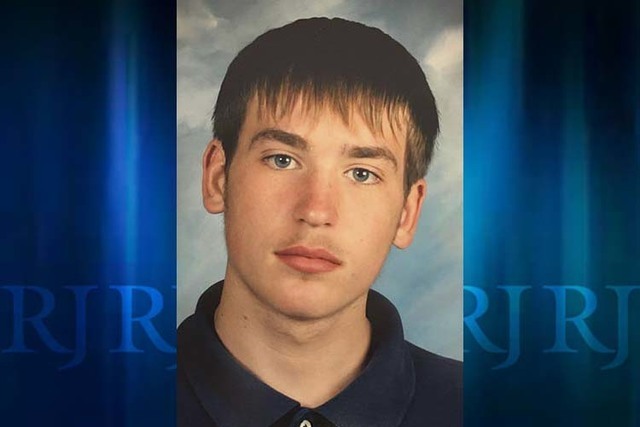 Aric Brill, 16, was shot and killed Feb. 20, 2009, outside a house party in North Las Vegas. Four men have been indicted in the fatal shooting. (Karen Brill-Kelley) 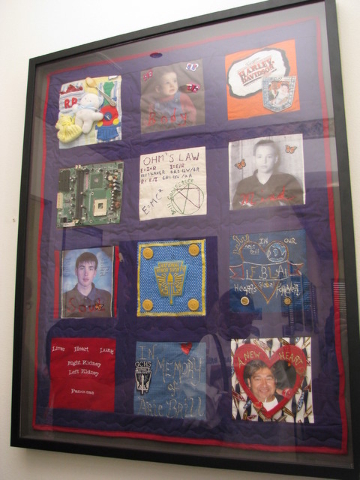 A quilt was dedicated to 16-year-old Aric Brill during a ceremony in his honor Feb. 21 at the University Medical Center for Transplantation, 1120 Shadow Lane. (F. Andrew Taylor/View)

Without Karen Brill-Kelley’s persistence, authorities may have never charged anyone in the slaying of her 16-year-old son.

On Thursday, prosecutors announced that four men had been indicted for murder in connection with the February 2009 killing of Aric Michael Brill.

As the defendants’ names were announced, his mother watched in court, fighting tears, clutching a framed photograph of him and wearing a button of the same image, along with a necklace that contained his ashes. It had been seven years, four months and 17 days, Brill-Kelley said.

Clark County District Attorney Steve Wolfson said that earlier this year authorities decided to dig back into the case that had gone cold years ago after they were “re-energized” by Brill-Kelley, who never stopped hounding detectives.

“I promised my children that if anybody ever hurt them I would stop at nothing to make sure they paid for what they did,” she said later. “I had a promise to keep to him.”

Wolfson said that “many, many people” witnessed the shooting that also left another teen injured. But those who saw what happened might have been reluctant to name suspects in the days and months that followed because of gang ties, the prosecutor added.

Aric Brill was attacked and shot in the back of the head outside a house party on Beesley Drive, near Charleston and Nellis boulevards. Witnesses told police at the time that a male approached Brill and another victim, pulled out two handguns and shot them.

Police have said the shooting was a random act of violence motivated by a robbery and was gang-related.

“Oftentimes those are some of the most difficult cases to investigate,” Wolfson said. “Karen being so persistent in wanting to see justice for her son is what caused this case not to lie dormant, what caused us to be re-energized and take a fresh look and put new eyes on the case.”

The killers got away with $20 and a busted cellphone. Aric Brill carried only a list of books he wanted to read and things he wanted to accomplish.

Brill-Kelley would call police at least twice a year, checking for developments. More often, she would drive to the corner of the east Las Vegas Valley where her son was gunned down.

She would be there every January for seven years, on her son’s birthday; and then she would return a month later, on Feb. 20, the anniversary of the day shooting. She would visit again on Easter. Mother’s Day. Thanksgiving. And Christmas.

“That’s where his soul was taken from his body and taken to God,” she said Thursday. “I can feel him over there.”

At night, the area is pitch black. When he was shot, there were no street lights.

For years, she has thought about how scared he must have been. She has thought about the other teens at the party, scattering as shots rang out, dropping to protect themselves. She wondered if they could have seen the shooter’s face in the darkness.

For years, the North Las Vegas resident wondered if anyone would ever be charged in the slaying.

Brill-Kelley struggled with long bouts of depression, sometimes unable to pull herself out of bed. Last year, she started counseling.

“I was stuck,” she said. “It’s been seven years, and I’m just starting to learn how to live again without him. I don’t want to, but I have to.”

She wears the necklace with her son’s ashes on special occasions and plans to wear it to court appearances for each of the defendants “every day until this is over.”

Asked whether authorities are seeking other suspects or whether the gunman was among those indicted, Wolfson would only say that the case remained an “ongoing investigation.”

Those charged are scheduled to be arraigned next week.

“I will be there to see their faces,” Brill-Kelley said. “They are going to see me.”