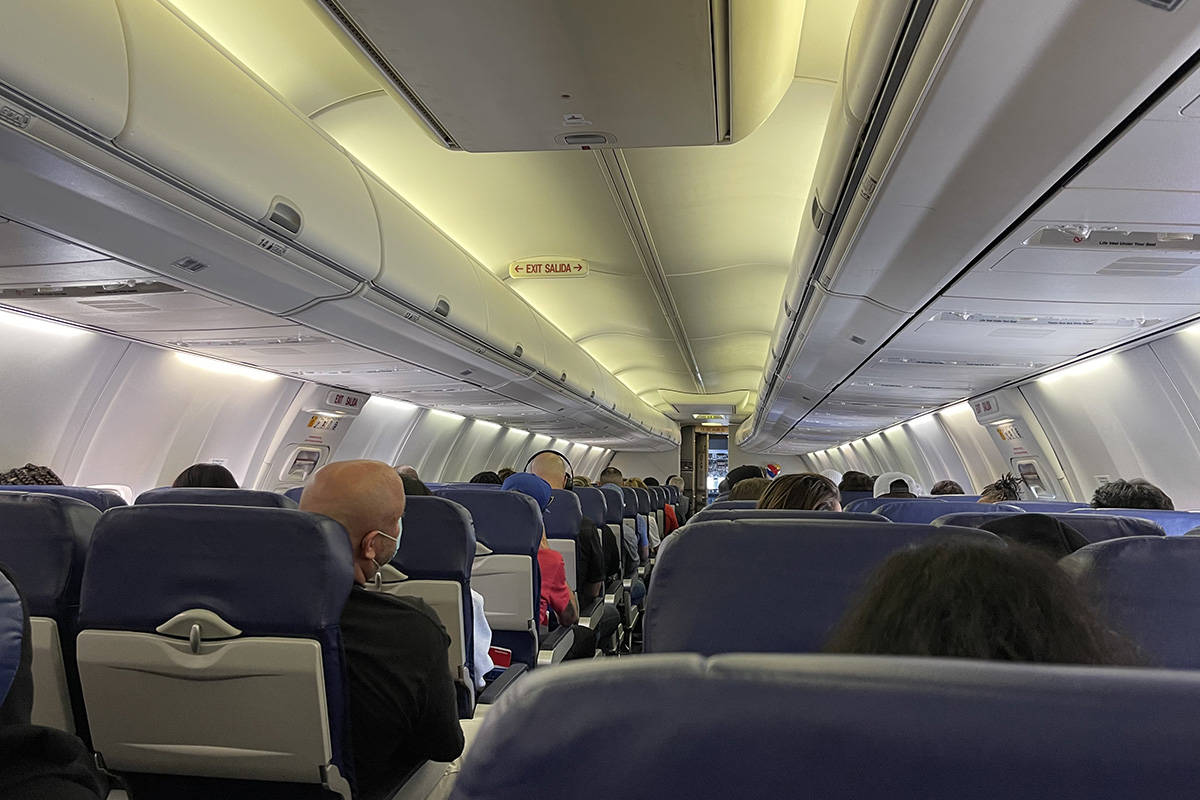 The Road Warrior's view on Southwest Airlines Flight 606 between Las Vegas and Oakland, as seen here on Thursday July 1, 2021, that was delayed four hours due to multiple issues. (Mick Akers/Las Vegas Review-Journal.)

With air travel returning to near pre-pandemic levels, unruly passengers are racking up fines tied to onboard flight incidents.

Over the past year the Federal Aviation Administration has levied more than $1 million in fines to travelers for alleged bad behavior, the agency announced.

Of 34 new cases announced last week — mainly tied to use of alcohol or refusal to wear masks — nine of them had ties to Las Vegas, with fines totaling $113,000, or about 11 percent of the FAA’s total fine pool.

No other single city had as many new cases as Las Vegas, though flights to or from cities in Florida accounted for 17 fines.

“We’ve seen incidents related to alcohol, violence toward flight attendants and also behavior in general,” FAA Administrator Steve Dickson said in a video statement. “By law, you must follow all directions from your flight attendants. Passengers who do not are subject to tough penalties, which can include heavy fines and jail time.”

Two of the incidents resulted in a pair of $15,000 fines to a pair of passengers on the same Dec. 2 Frontier Airlines flight from Las Vegas to Denver, for drinking alcohol not served by the airline. The FAA said the two men drank the liquor in front of flight attendants even after flight attendants alerted them it was unlawful to do so. Law enforcement met the men at the gate when their flight landed.

On Jan 29, a trio of women on a Frontier flight from San Diego to Las Vegas were fined $13,000 each, for allegedly drinking in front of flight attendants and not complying with the mask mandate. Two of the three women also allegedly interfered with the flight crew regarding mask wearing.

Once a traveler receives a notice of a fine from the FAA, they have 30 days to respond to the agency.

The incidents are part of 3,889 reports of unruly behavior on flights and 2,867 reported incidents of passengers not complying with the federal mask mandate.

The Transportation Security Administration announced last week that its mask mandate would be extended from Sept. 14 to Jan. 18.

“Airline gate agents make pre-boarding announcements to remind travelers they cannot carry alcohol onto aircraft, and they can deny boarding if a customer won’t comply,” Jones said. “This has long been the practice at LAS and recently we’ve worked with local airline management to reiterate this expectation, with good success. This has also been discussed repeatedly in conversations with Metro (Police) leadership at the airport, so officers here are well attuned to this issue.”

Jones said the airport has shared the FAA’s social media push to alert passengers of their responsibilities and airport staff is working on new messaging to support the campaign.