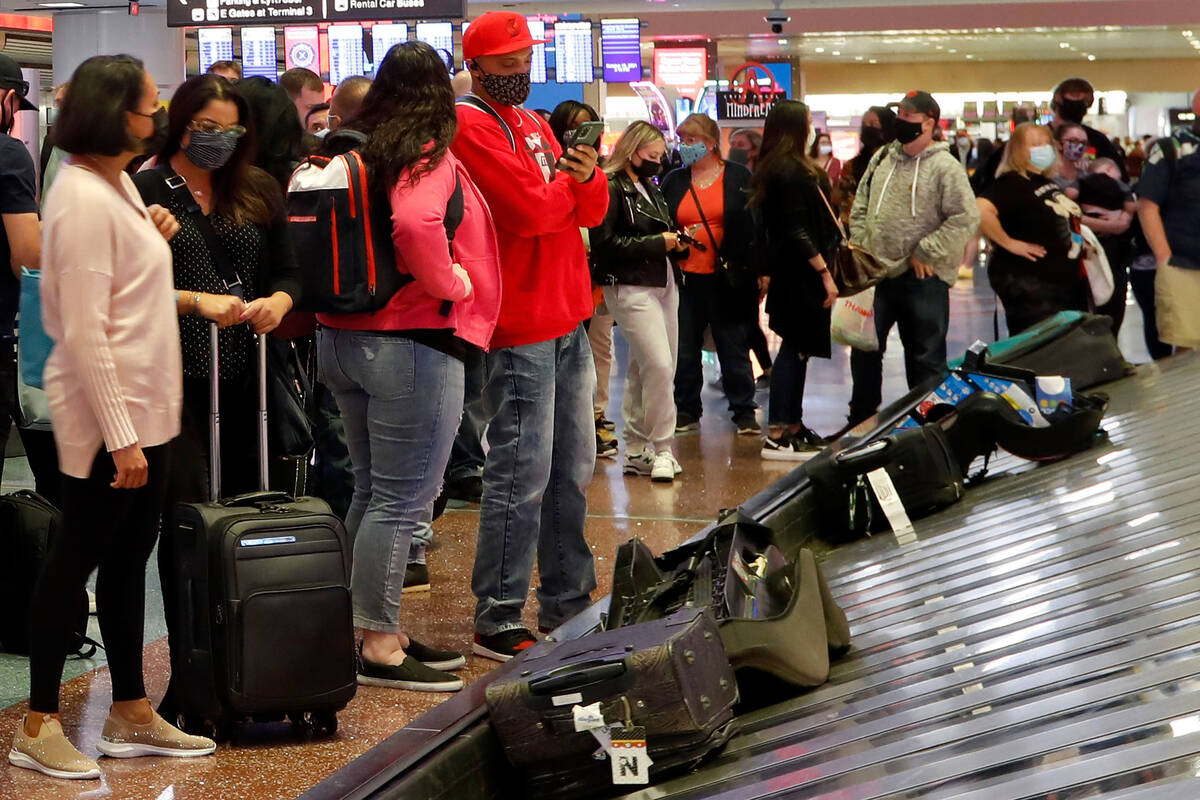 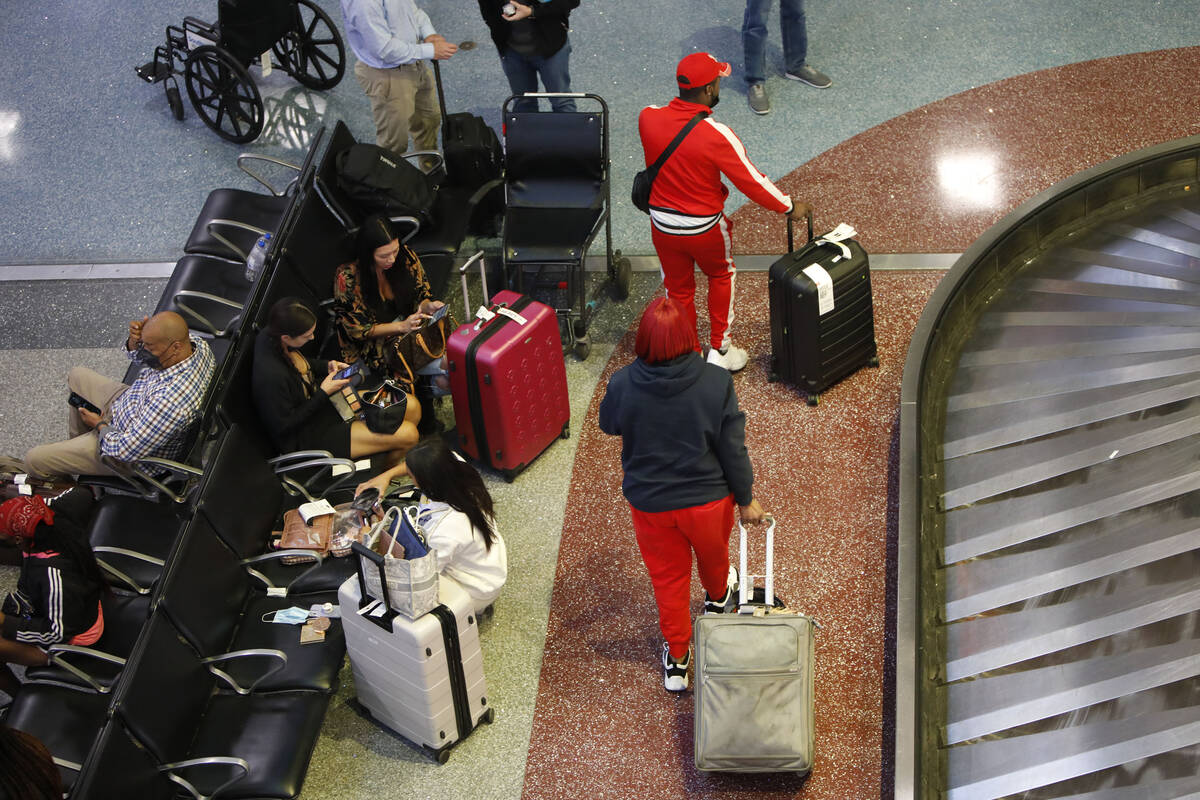 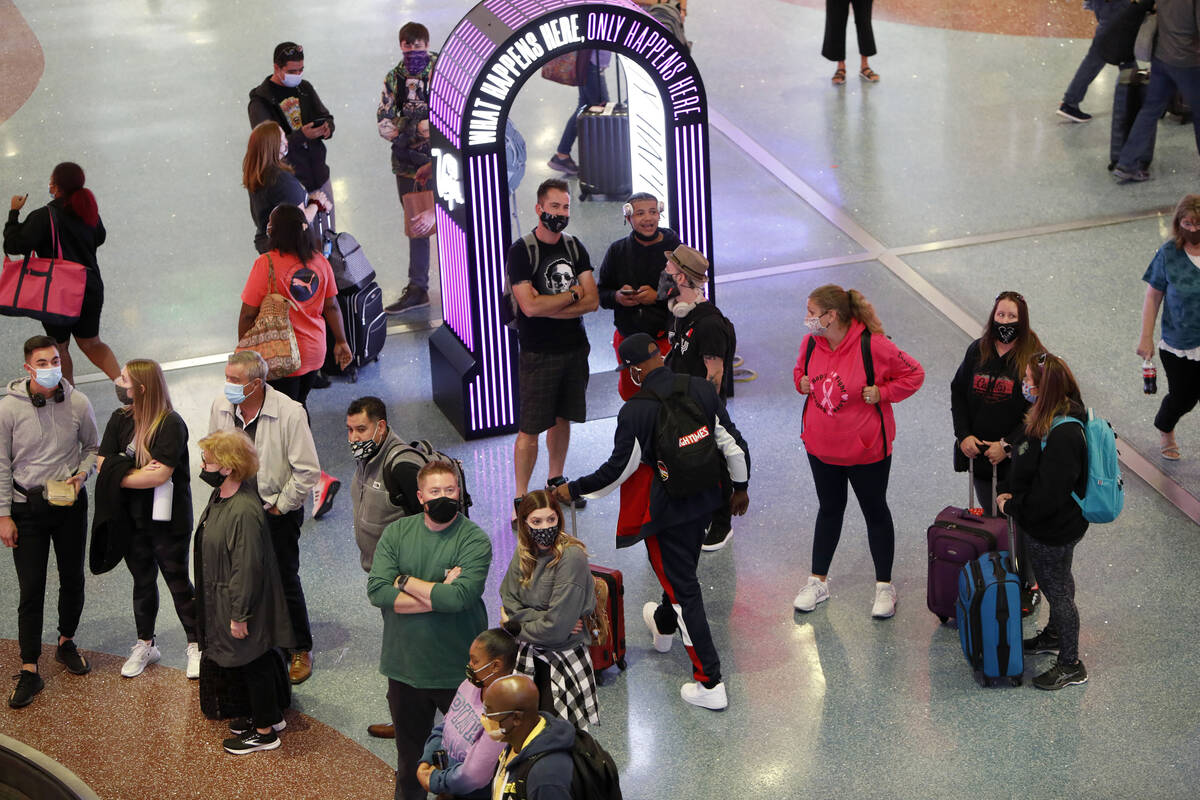 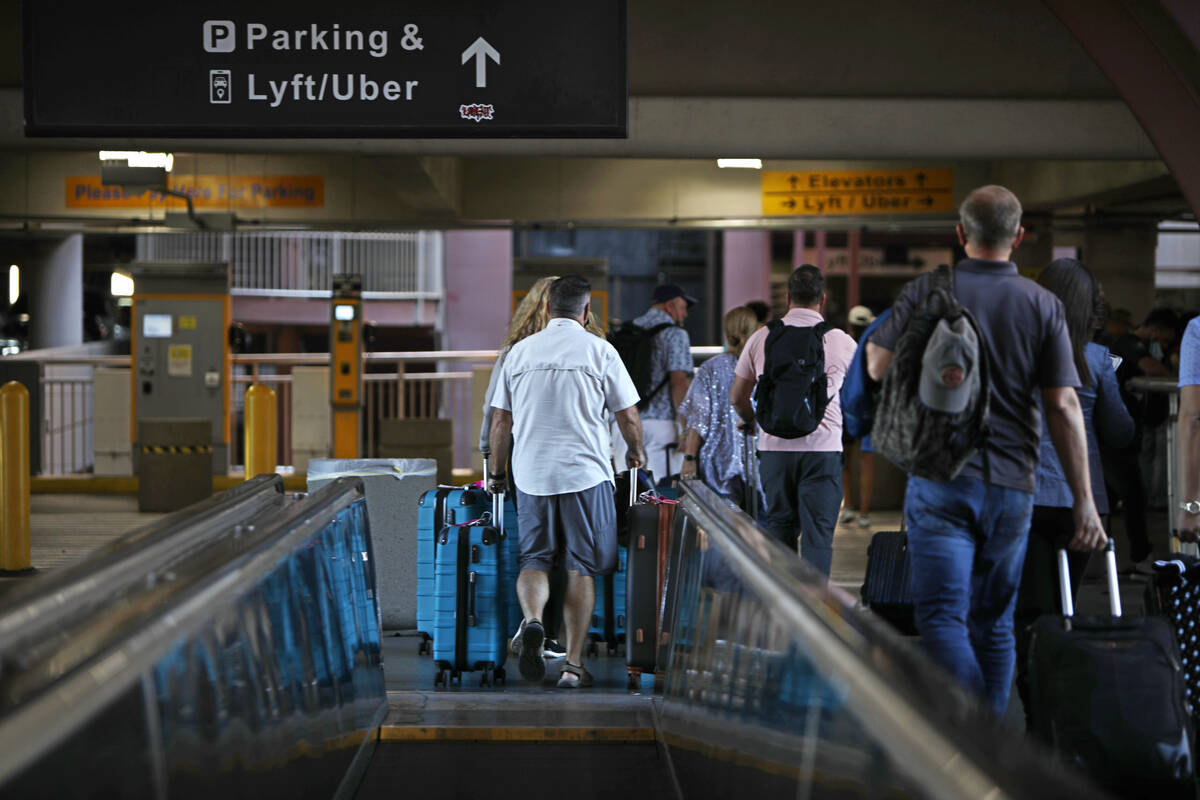 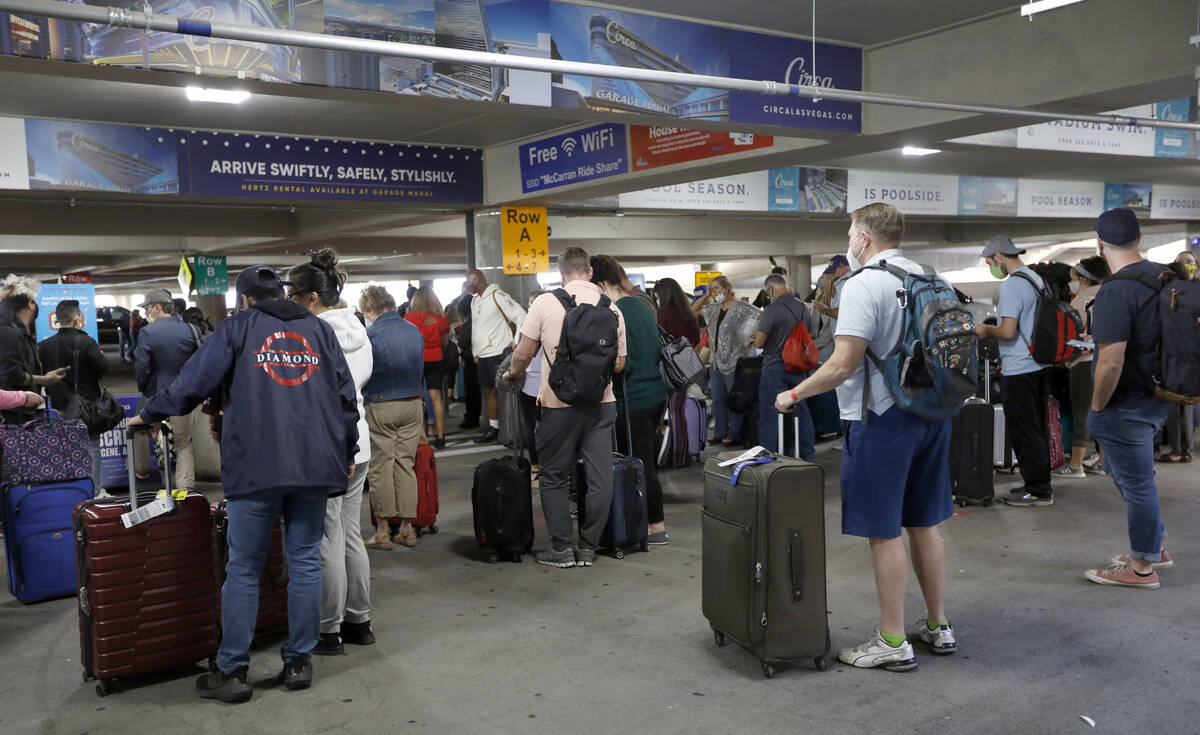 Southern Nevada tourism officials were peppered with the same question over and over again at an international airline conference in Italy this week.

When exactly would the U.S. ease the international travel restrictions for vaccinated flyers?

“Almost every single conversation we had with a European carrier, that was the very first question they asked,” said Chris Jones, chief marketing officer for McCarran International Airport.

The answer came just after the conference concluded, though, with the Biden administration on Friday confirming that it would lift travel restrictions to the United States on Nov. 8 for fully vaccinated individuals arriving by air travel or by crossing land borders. The policy change was initially announced in September, but without a formal date.

“The US’ new travel policy that requires vaccination for foreign national travelers to the United States will begin on Nov 8. This announcement and date applies to both international air travel and land travel,” Kevin Munoz, White House assistant press secretary, said on Twitter.

Jones and other officials from McCarran and the Las Vegas Convention and Visitors Authority were in Milan for the World Routes conference, which ran from Sunday through Tuesday. Jones said Friday that the questions were frustrating because at the time they did not have a good answer, leaving questions about when the all-important overseas travelers could return to Las Vegas.

Having that confirmed date, Jones said, “is hugely important,” as it allows the carriers to actually move forward with a firm plan in place and lets travelers finally book their flights.

“We’re talking 20 months of dormancy and that doesn’t just flip back on with the flip of a switch,” he said.

‘Demand is clearly there’

Billy Vassiliadis, principal for Las Vegas-based R&R Partners, the advertising consultant for the Las Vegas Convention and Visitors Authority, said he expects foreign visitors to flock to Southern Nevada the same way domestic travelers did when restrictions were lifted by local government authorities.

“I think we’re going to see, as long as we get the (airline) carriers back, we’re going to see the same sort of rush to return that we saw domestically when we reopened and when the restrictions were lifted,” Vassiliadis said.

“I think demand is clearly there. I know our Mexican flights have been doing well all along and I know our Canadian partners have been shopping it big to get it back.”

Vassiliadis said the swiftness of Biden’s planning caught him by surprise, even though tourism leaders — including his wife, Rosemary, the director of the Clark County Department of Aviation — had testified in federal hearings about the importance of bringing international travel back quickly.

He said he expects to discuss the potential for international tourism marketing campaigns with LVCVA President and CEO Steve Hill and Chief Marketing Officer Kate Wik.

“Now that we have a sense of it, I’m confident that Steve and Kate will want to begin to put together a campaign,” Vassiliadis said.

The convention authority doesn’t have elaborate international marketing operations in place but has had contracted offices worldwide to spread the word about Las Vegas.

In 2020, the LVCVA board of directors unanimously canceled international marketing contracts established in May 2018, anticipating a lengthy shutdown and limited hope for getting people to vacation in Las Vegas during the worldwide coronavirus pandemic.

The LVCVA first launched a comprehensive international initiative in 2008. Since then, international visitation to Las Vegas increased from 4 million people in 2008 to 6.7 million in 2017.

Vassiliadis noted the key “if” — if the foreign air carriers that have flown to Las Vegas in the past return quickly. Airlines often need up to six months of lead time to develop schedules.

It’s well documented that international travelers stay longer and spend more than most domestic travelers, but the volume of flights and passengers directly from foreign countries shows the potential impact of the new travel policies.

The largest number of passengers arriving internationally were flown by Canadian flagship carrier Air Canada, which transported 859,208 passengers to McCarran in 2019 — which was a 3.3 percent decline from the number flown in 2018.

Another big traffic generator is Westjet, a Canadian discount carrier, which flew 826,360 passengers to McCarran in 2019, a 13.1 percent decline from the number flown in 2018.

The largest Mexican traffic generator in 2019 was discount carrier Interjet, with 232,077 passengers, but the company ceased operations indefinitely in December 2020.

Other Mexican carriers operating to Las Vegas are discounters Volaris and Vivaaerobus, which were experiencing upswings in passenger traffic to McCarran at the end of 2019, and flagship carrier Aeromexico.

British rivals British Airways (326,112 passengers) and Virgin Atlantic (227,299), although flying fewer travelers than in 2018, were the biggest volume providers from Europe. Other smaller operators had fewer flights when service ended — Norwegian Air, Condor, KLM and Air France among them.

Asian carriers offered potential with Korean Air’s nonstop flights to and from Seoul, South Korea (128,571 passengers in 2019, a 5.6 percent increase from 2018), and Hainan Airlines’ nonstop routes to and from Beijing (42,539 passengers, off 18.4 percent from the previous year.)

A small contributor to the foreign passenger count came from Israel-based El Al, 11,173, which just started Tel Aviv service in 2019 before the shutdown.

Some domestic airlines — Frontier, Delta and Sun Country — flew passengers from foreign countries directly to Las Vegas, the statistics show. Other airlines have connecting flights to Las Vegas from overseas, but McCarran doesn’t track those numbers.

Tourism industry leaders were happy about the announcement.

“Today marks an important turning point in the recovery of international visitation essential to Las Vegas’ tourism industry,” Hill said. “This milestone is also significant and welcome news for many of our major trade shows and conventions that draw exhibitors and attendees from around the world.”

Convention attendance has been hindered in the past three months by current travel restrictions with some shows clearly missing international representation.

Most recently, this month’s Global Gaming Expo attracted less than half the 27,000 attendees it normally hosts because many of them have been participants from foreign countries.

The Consumer Technology Association, sponsors of CES, believe the lifting of restrictions will boost numbers at January’s show with around a quarter of the attendees coming from foreign countries.

“Thank you to the Biden administration for lifting the travel ban on international vaccinated travelers. There is tremendous value in reopening borders, allowing us to reconnect face-to-face,” a representative of the association said in an emailed statement.

“CES 2022 registration kicked off just over a month ago and we already have tens of thousands registered for the show, with 25 percent of the registrants international,” it said. “Vaccines work, and we look forward to seeing you at CES 2022 in Las Vegas.”

“We appreciate the federal administration working alongside the travel industry to advocate for a safe reopening of international travel beginning on Nov. 8,” Hill said. “We are excited to welcome back our sorely missed international visitors.”

Roger Dow, president and CEO of the U.S. Travel Association, applauded the Biden administration for easing the restrictions and welcomed the newly announced date for welcoming back international travelers.

“The date is critically important for planning — for airlines, for travel-supported businesses, and for millions of travelers worldwide who will now advance plans to visit the United States once again,” Dow said in a statement. “Reopening to international visitors will provide a jolt to the economy and accelerate the return of travel-related jobs that were lost due to travel restrictions.”