Las Vegas’ ambitious investment in building the world’s largest Wheel – the Las Vegas High Roller- looks like it will continue to pay off in the years ahead.  With its current status as the Guinness World Record-holder at stake, construction delays from aspiring competitors in New York and Dubai mean that the Las Vegas High Roller will continue to retain the record through 2021, at very least.

Standing at 167 meters in height, the Las Vegas High Roller is the world’s tallest Ferris Wheel, providing tourists a spectacular viewing experience of the city and its surroundings.  Since opening in 2014, it has become a beloved part of the Vegas skyline, increasing tourism appeal of a town traditionally known as primarily a desert strip of casinos. 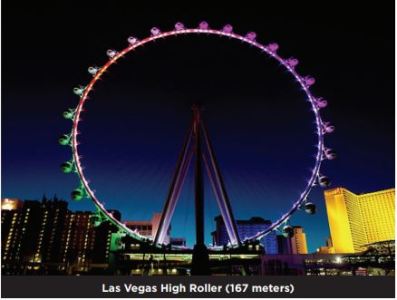 Vegas looks set to keep its hard-won record for several years to come due to problems afflicting competing cities’ own Wheel projects.  Domestically, the New York Wheel, planned as the centerpiece for a revitalized Staten Island tourism niche, became mired in difficulties.  The project descended into farce when its main contractor (Dutch-based Mammoet-Starneth) walked off the job and was summarily fired; the contractor subsequently filed for bankruptcy.  Only last month did the two sides formally settle their differences.

The tragic comedy continued when the New York Wheel project was recently given 120 days to find the financing needed to keep the project going.  Media and investors alike are wondering whether the project has sufficient capital to sustain it.  Noting that the project’s original $280 million budget has ballooned to over $500 million now, on British investor warned of a “significant shortfall” expected in comments for the Advance, while describing the project’s failures as “unfathomable.”  Being a privately funded enterprise, the New York Wheel is not bound to discuss costs, but still maintains that the project will get back on track with its new contractor, American Bridge Company.  In May, the NY Wheel project told Advance that $400 million of the new $580 million provided by private investigators had already been spent last spring, when the project was indefinitely delayed.

Meanwhile, over in United Arab Emirates, another challenger for the title of the world’s tallest wheel faces similar uncertainties.  The much-hyped Ain Dubai has long been presented as the centerpiece of Dubai Expo 2020 and Dubai’s overall 2020 Tourism Vision approved by His Highness Sheikh Mohammed bin Rashid Al Maktoum, Ruler of Dubai and UAE Vice President and Prime Minister; however, various problems afflicting contractors have slowed the pace of construction and incurred disputes over losses.  Although officials aren’t saying it publicly yet, the Dubai Wheel is now expected to be open in 2021 at earliest putting a damper on the Emirates’ entire tourism development plan.

Ironically, the holdups in Dubai may have knock-on effect for the operator of the Las Vegas High Roller- Caesars Entertainment Corporation.  In mid-April, Caesars and Dubai-based Meraas Holdings announced a non-binding letter of intent, which will see Caesars manage two luxury hotels and a beach club at Meraas’ Dubai-based Bluewaters Island development.  At that time, it was projected that Caesars Palace Bluewaters Dubai and Caesars Bluewaters Dubai would be opening by late 2018 at the Red Sea Resort.  The investment is particularly important to Caesars’ portfolio, being the company’s first non-gaming resort.

The Las Vegas-based entertainment empire has enthused over the project, which will include two deluxe hotels and a beach club, Caesars Beach Club Bluewaters Dubai, indoor and outdoor pools, spa center and conventions space.  In a press release, Caesars’ President and CEO Mark Frissora stated that this collaboration with Meraas would see Bluewaters Island become “the region’s top hospitality, dining, and entertainment destination.”

Speaking at the same time, Meraas Holding’s Chairman Abdulla Al Habbai stated that his company is “dedicated” to implementing the vision of our wise leadership and consolidating Dubai’s status as a global tourist destination in line with the Dubai Tourism Vision 2020.”

Therein may lie the problem.  The Dubai government’s ambitious 2020 program requires the completion of the 210-meter Ain Dubai Wheel to be complete; however, the project’s problems mean that Ain Dubai will not be finished on time for the launch.  Since the contract between Caesars Entertainment and Meraas will only be signed once the former is certain that the project will indeed be completed as planned, further Wheel-related delays risk ruining the $2.17 billion Bluewaters Island project, which would be a massive embarrassment for the Emirates. 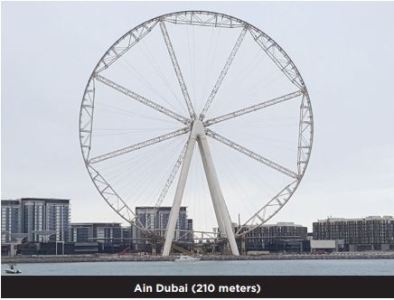 As of late March, however, Wheel structure of Ain Dubai had not been completed.  The project’s original timetables have been extended several times since its inception in 2013.  Moreover, disputes continue over financial losses incurred between the project and various subcontractors, including a capsule manufacturer which may have to file for bankruptcy, potentially mirroring the dire situation on Staten Island.

If all the disputes are not resolved by July, completing the Ain Dubai Wheel in time for the Dubai Expo 2020 will be practically impossible.  Although local leaders and media continue to paint a rosy picture of progress, insiders note that the powers-that be are privately panicking over the potential for embarrassment, should the city-state’s enormous new emblem not be completed in time for the launch.

Even worse, the current Ain Dubai hold-up could endanger the Emirate’s final agreement with Caesars, one of the world’s most recognizable and trusted brands in entertainment and hospitality.  With a narrowing window of opportunity, and a literal plethora of “moving parts,” it will be intriguing to see if Dubai gets its act together in time for the 2020 Expo.  For now, however, the High Roller over in Las Vegas can rest assured that their own world-record Wheel will continue to overshadow all competitors for years to come.