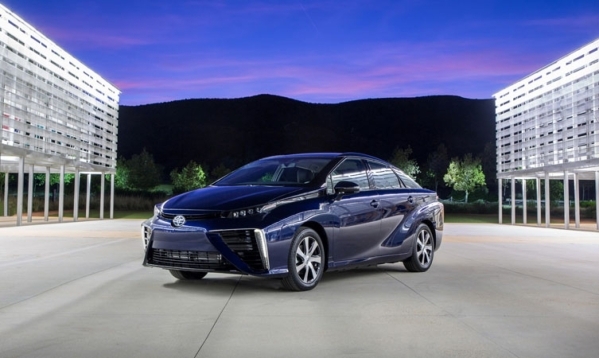 The 2016 Toyota Mirai uses a fuel cell to extract electrons from hydrogen gas to drive an electric motor, while emitting just water vapor in the form of H2O from its exhaust tail pipe. COURTESY 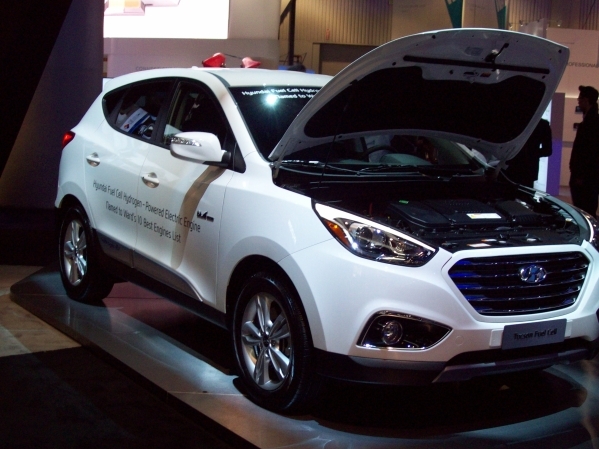 Hydrogen is the most common element on the planet and can be derived relatively easily from many other resources, including water, whose molecules are made up of two parts hydrogen and one part oxygen.

Hydrocarbon resources for the element are also widespread, such as natural gas, which is composed primarily of methane. Each methane molecule contains one part carbon and four parts hydrogen, or CH4. The United States has large reserves of natural methane gas available underneath its land mass, but methane can also be harvested from garbage landfills by recycling and fermenting waste materials as they decompose.

During the administration of President George W. Bush, government research and funding was targeted at the automotive industry to help develop hydrogen-powered vehicles. There were two approaches: burn hydrogen directly in an internal combustion engine instead of gasoline, or use a fuel cell to convert hydrogen and oxygen into electricity to drive an electric motor.

A fuel cell is more efficient than an internal combustion engine. It uses a stack of proton exchange membranes to quietly convert hydrogen and oxygen into electricity, with the help of a platinum-coated catalyst. The energy conversion happens under pressure, but the hydrogen is not burned as the electrons are stripped away. The remaining hydrogen protons combine with oxygen in the ambient air to form H2O water vapor at the exhaust pipe, instead of waste heat, carbon dioxide, carbon monoxide, nitrous oxide, volatile organic compounds, ozone and particulate matter in the form of soot, that are the result of a gasoline internal combustion engine process.

A fuel cell is an efficient electricity generator and hydrogen is an abundant fuel source, so Toyota has been continuing to implement a long-term strategic plan that began with the introduction of the Toyota Prius, the first hybrid car to drive the wheels of a vehicle with an electric motor that employed an advanced nickel metal hydride battery pack at that time. The company later manufactured a plug-in Prius PHV that used a larger and more efficient lithium-ion battery pack for more electric-only range in conjunction with a gasoline engine.

Now Toyota wants to phase out the gasoline-powered internal combustion engine altogether by replacing it with a hydrogen-powered fuel cell, a small storage battery and an electric motor.

Performance from the electric motor is the same as any other electric car, with lots of electromagnetic torque available to the wheels to enable quick acceleration off the line and while passing other cars on the road. A fuel cell and electric motor are also really quiet compared to the sound of an internal combustion engine.

The Toyota 2016 Mirai is the first production fuel-cell car that can be purchased and owned by consumers. Hyundai began leasing the Tucson crossover utility vehicle as a fuel cell model last year in California but does not offer a purchase option at this time.

The Honda Clarity fuel cell vehicle premiered at a Japan Auto Show this year and is expected to be available as a 2017 production model. GM and Mercedes Benz may be close behind while Nissan, Ford and other automakers are waiting in the wings with their own concept fuel cell vehicles.

However, there are obstacles in the path to putting these cars on American roads, most notably a lack of infrastructure for refueling the vehicles, so that they can travel cross-country.

Hydrogen gas is a volatile fuel, like any other energy resource, and must be handled carefully in the way it is stored and distributed, especially near population centers. Fuel cell cars must store hydrogen in the form of a gas compressed up to 10,000 pounds per square inch.

Storage tanks are usually cylindrical containers that have a thick liner wall made of metal or polycarbonate plastic. This inner wall is then enclosed within a mesh of carbon fiber reinforcement to make the cylinders very strong and durable. These pressure vessels are engineered to withstand more than 2.2 times the pressure that the cylinder will actually contain.

A vent valve is also added to the vehicle fuel lines with an alarm. If pressure inside the cylinder exceeds a maximum rating, the valve allows excess hydrogen to be released into the air. Because hydrogen is 14 times lighter than air, it quickly disperses upwards and away from the storage tank.

The Toyota Mirai uses two of these compressed hydrogen gas tanks to achieve a range of over 300 miles before needing to be refilled. The Hyundai Tucson CUV can travel 265 miles on its larger single tank.

But what happens when a compressed gas tank is ruptured in a car accident and the escaping gas is accidentally ignited? Pictures of the Hindenburg zeppelin accident come to mind, although that photographic image from 1937 may not be a fair representation of today’s technologies.

Hydrogen gas burns, but does not give off radiant heat and its flames are not visible. You can’t feel a hydrogen flame until you are actually inside it.

However, as a vaporous gas, hydrogen does not pool on the ground like liquid gasoline and has a tendency to quickly dissipate once free in the air. That is why an audible alarm is needed to signal escaping gases through a pressurized relief valve. Bystanders should move as far away from the alarm sound as possible while a cylinder is venting, or if it has been damaged.

Firefighters across the country are studying how to handle these types of traffic incidents through online training sessions offered by the National Fire Protection Association at no cost.

U.S. firefighters respond to more than 250,000 gasoline vehicle fires per year, according to the National Highway Traffic Safety Administration, a potential risk taken by drivers for the privilege of owning a car and the freedom of the open road.

After 250 miles of travel, a Toyota Mirai or Hyundai Tucson driver will need to find a refueling station that has the equipment to pump and compress hydrogen gas back into a fuel-cell car’s tanks.

During the past decade, Honda also explored the use of reforming stations for natural gas that could be manufactured small enough to fit in a customer’s garage and be connected to a home natural gas pipeline. The home reforming station should also compress and dispense the resulting hydrogen gas into a fuel cell vehicle storage tank at 10,000 psi.

Safety issues will need to be addressed, tested and evaluated before owners can refuel their hydrogen-powered cars at home.

California is the first state in the U.S. to support commercial infrastructure development for hydrogen fuel cell cars that can be bought and owned by the general public, so Toyota and Hyundai have only sold and leased fuel cell cars in California for the U.S. market at this time. But they are actively rolling out infrastructure in Japan and South Korea, as well.

“There are 58 commercial hydrogen filling stations in development throughout the state of California,” said Chris White of the California Fuel Cell Partnership. “We have been working on hydrogen-related issues for 11 years.”

A map of the refueling stations shows the status of the proposed sites underway, including one near Truckee, north of Lake Tahoe. Location information can be found at the website of this nonprofit organization at: http://www.cafcp.org/stationmap.

Toyota also is offering Mirai owners a fuel card that gives them access to hydrogen at no cost from these stations for an extended period of time.

But what happens when a Toyota Mirai or Hyundai Tucson owner in Southern California wants to test the range of his fuel-cell cars and drive east to Las Vegas? Is the city ready to accommodate these drivers?

Not quite yet, but Southern Nevada definitely has the experience and capability to move quickly to create refueling infrastructure, if required.

The city of Las Vegas motor fleet experimented with fuel cell cars during the last decade, including test vehicles from GM, Toyota, and Honda. The city’s motor pool maintained an active hydrogen pumping station for these test vehicles.

The Las Vegas site was a waypoint destination for a cross-country road trip demonstration tour during 2008. A caravan of 11 fuel-cell cars drove from Portland, Maine to Los Angeles, including the Toyota FCV, Honda FCX Clarity, GM Equinox and other research platforms.

The Las Vegas Valley Water District also experimented with fuel cell vehicles that use hydrogen extracted from water by the process of electrolysis to fuel some small utility vehicles like a Taylor-Dunn electric cart. A hydrogen refueling station was installed at the Las Vegas Springs Preserve.

The Las Vegas Valley Water District also partnered with University of Nevada, Las Vegas, to develop hydrogen-powered vehicle technologies through its Center for Energy Research. UNLV researchers studied an innovative technique for electrolysis that used photovoltaic solar panels to generate electricity at two electrodes, in order to separate and extract hydrogen from water.