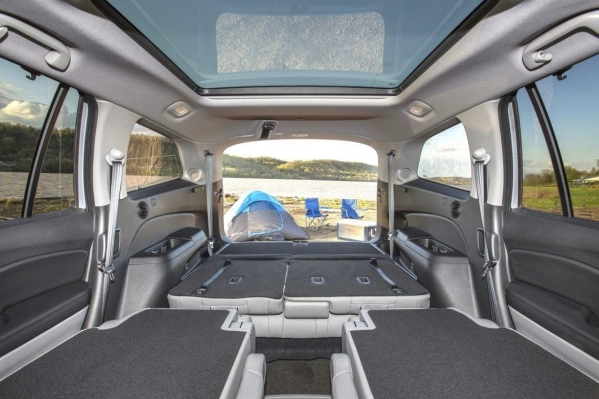 No, this isn‘t a Honda Odyssey minivan — it‘s the highly configurable rear of the 2016 Pilot with its seats folded down and its new panoramic skylight sunroof. A DVD theater is also available. COURTESY 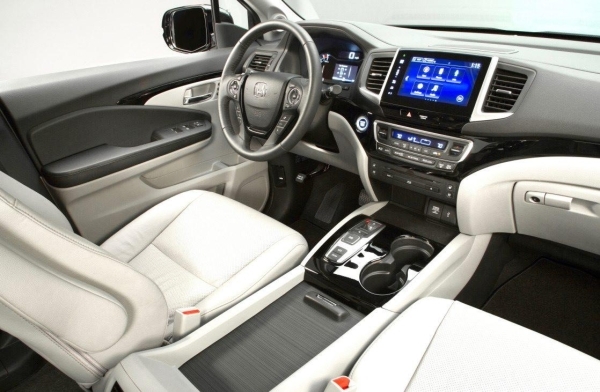 About all that keeps the 2016 Pilot Elite from crashing the large/midsize luxury crossover party is its man-of-the-people Honda nameplate. Surprisingly, the pushbutton gear selector has no electronic parking brake. COURTESY

The clean-sheet 2016 Honda Pilot manages to be bigger yet lighter, more powerful yet more fuel-stingy than its predecessor. A base Pilot LX with front-wheel drive starts at $30,875; a fully equipped Pilot Elite all-wheel drive lists for $47,300. COURTESY

Recently I was praising the Honda Odyssey van with one hand while with the other pointing out that it needs updating. The brand-new Pilot is a fine example of what Honda can do as each of its vehicles comes up in the rotation to be refreshed. Or, in this case, re-engineered.

This third-generation of the Pilot is not like any previous model. For starters, it’s big, almost immense, at least on the inside. Outside, it’s just 3.5 inches longer than before (and an inch less tall) — but, of course, that’s one of Honda’s party tricks, squeezing lots of cubic inches out of a few linear inches.

Nor does it drive especially big. Once you’ve stowed the hockey team and their gear bags, the Pilot seems to shrink down to midsize, and then an army of available and new-to-Pilot features called Honda Sensing chips in to help.

Along with proximity beeps and a backup camera that shows normal, top-down and wide-angle views, our Pilot Elite also warns its pilot of other vehicles crossing behind, coming up on either side, or lurking ahead. If the driver is texting and the Pilot decides a frontal collision is coming up, it’ll hit the brakes.

Another part of Honda Sensing watches the lane markings and warns the driver if the vehicle drifts one way or the other. At highway speeds — 45 to 90 mph — the Pilot will even center itself, if a blinker isn’t indicating a lane change (and if the road markings are clear). This is not hands-free, autonomous driving; the helmsman has to keep at least one and preferably two fingers on the wheel, to feel it vibrating if there’s an “issue.”

With all of this hard- and software also comes a feature that I wouldn’t be without: adaptive cruise control. These systems have their own on-off switches and graphics, and there’s a master control on the steering wheel that lets the driver take them all off-line at once — when exiting the interstate, say.

Pilots are available with front-wheel drive or all-wheel drive. Honda calls the Pilot’s all-wheel-drive system the “most sophisticated and technologically advanced in a mainstream, three-row SUV.” Based on input from sensors, it continually varies how much power goes to the front and rear axles and to the individual rear wheels. This is torque vectoring, and it provides better grip and helps keep the vehicle lined up properly in corners.

All-wheel-drive Pilots also get selectable traction management, which adjusts the car’s behavior for driving on pavement, snow, mud or sand.

All Pilots come with a 3.5-liter V-6 engine rated for 280 horsepower and 262 pounds-feet of torque. This is 30 horses and nine torques more than last year, and the new motor has 200 to 300 pounds less vehicle to pull around than before, so the new Pilot feels more “premium” underfoot. (It’s also rated to tow 5,000 pounds.)

In city traffic, the engine can stop and restart, and in low-load situations it can run on just three cylinders — one side of the vee. Not all Pilots have the same transmission, however. The LX, EX and EX-L versions come with six-speed automatics while the top-tier Touring and Elite Pilots get Honda’s first nine-speed automatic, with manual-shift finger paddles. Both boxes offer normal and sport modes.

It’s bigger and more powerful, but the new Pilot is also more fuel-efficient. According to the trip computer, we came within a few tenths of a gallon of its claimed 25 highway mpg. This was without resorting to the Eco drive setting, which leaves the Pilot unpleasantly sluggish.

Buyers who ignore all this technology will still appreciate the Pilot for its comforts and thoughtful details: the three automatic heating and cooling zones, the self-adjusting wipers, the easy-to-use satnav, the heated steering wheel, the tray atop the storage bin between the front seats and much, much more. (I’d mention the LED map lights too, but what are maps?) Kids, of course, like the four USB charging ports, the available DVD theater and all the connectivity apps.

Honda claims its Pilot-ers are much younger than Explorer, Highlander, Acadia and Traverse owners, and much more loyal to their brand. The new Pilot is unlikely to alter these stats except maybe to improve them even more.

— Silvio Calabi reviews the latest from Detroit, Munich, Yokohama, Gothenburg, Crewe, Seoul and wherever else interesting cars are born. He is a member of the International Motor Press Association.