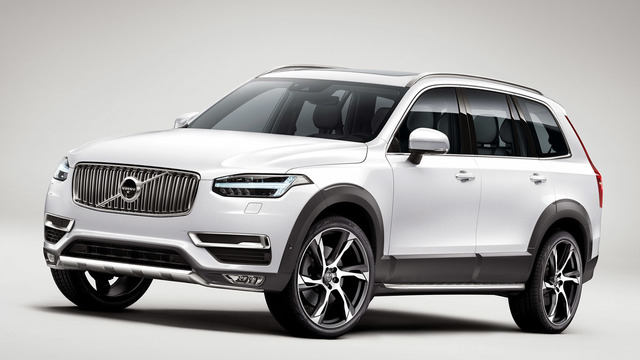 COURTESY The new Volvo XC90 is roughly 250 pounds lighter than the outgoing wagon, despite being about the same size.

Volvo finally revs up a more contemporary XC90 for 2016 with leading-edge styling and small-but-potent engines.

The new XC90 has been changed from the original in every conceivable way and is roughly 250 pounds lighter than the outgoing wagon (now 4,400 pounds), despite being about the same size. The hood, though, is decidedly longer and is fronted by a uniquely designed LED running-light array that Volvo refers to as “Thor’s Hammer.”

The interior is the epitome of Scandinavian design with natural-wood inlays, supple leather seats and trim and a very classy crystal glass shift lever.

As for power, Volvo is focusing on fewer pistons. The T6 model uses a supercharged and turbocharged 2.0-liter four-cylinder that produces 316 horsepower and 295 pound-feet of torque. The “Drive-E,” as it’s called, uses the turbo for top-end power and the belt-driven supercharger to help out at lower engine revs.

For performance fans that prefer keeping it on the green, Volvo offers a T8 Twin Engine plug-in hybrid. It adds an 87-horsepower electric motor that increases the net output to 408 horsepower and 472 pound-feet.

Both the T6 and T8 use an eight-speed automatic transmission.

Although all-wheel-drive is standard, the T8’s electric motor powers the rear wheels without employing a conventional driveline (and no drive hump on the floor). A “Power” setting for the T6 is for full-on performance (zero-to-60-mph in 6.4 seconds, says Volvo). The T8 cuts that to 5.6 while the “E” mode allows it to travel up to 25 miles on electric power.

The base all-wheel-drive XC90 Momentum trim level comes with all the basics plus a panoramic sunroof, 9-inch touch-screen display with navigation, power tailgate and a 330-watt 10-speaker audio system. Momentum also comes with a system that recognizes cyclists and pedestrians and applies the brakes should the driver fail to recognize an impending collision.

Available option packages allow you to add more active safety content (e.g., forward, backup and blind spot collision warnings), front and rear park assist, premium Bowers and Wilkins-brand audio package and 21- or 22-inch wheels. You can also order air suspension that keeps the XC90 on the level when loaded with people and/or cargo.

The XC90 also boasts a touchscreen system, according to Volvo of Las Vegas salesman Jonathan Deutschman.

“It’s a new thing for Volvo,” he said. “It’s vertical so it’s easier to read and control the climate and media features. You can also download apps to it such as the app to unlock the car or a remote starter and access an on-call service to speak to an operator in emergencies.”

Deutschman added that the model has been very popular at the Las Vegas-based dealership.

“So far everyone loves it and we’ve had a lot of trouble keeping it on the lot right now,” he said. “It’s attracted a lot of people because of the great gas mileage combined with the amount of power and third-row seating. There’s typically a big feel to vehicles with third-row seating, but this one drives more like a car and doesn’t look or feel huge.”