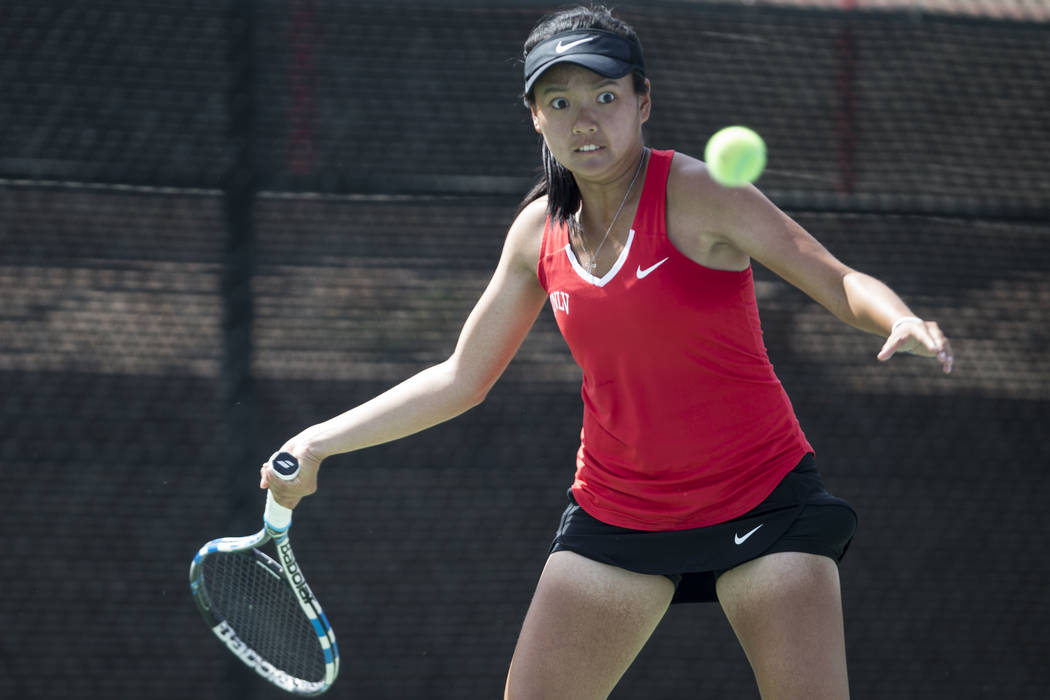 The seventh-seeded duo overcame a 5-3 deficit in the first set of the title match to edge Northern Arizona sophomore Adrianna Sosnowska and freshman Mimi Bland 7-5, 6-4.

At Boulder City, freshman Elina Saksa shot a 3-under-par 69 for a one-stroke lead in a 96-player field after the first round of the three-round Las Vegas Collegiate Showdown at Boulder Creek Golf Club.

The Rebels were tied for third with Long Beach State in the 18-team field at 13-over 301, five shots behind pace-setting San Francisco. South Dakota State was second at 9-over 297, and Fresno State was alone in fifth at 18-over 306.

Fresno State junior Brigitte Thibault was alone in second at 2-under 70.

For UNLV, junior Samantha Fuller and sophomore Veronica Joels were tied for 18th at 4-over 76, junior Cathy Liu was tied for 58th at 8-over 80, and sophomore Nastasia Kossacky was 84th at 11-over 83.

Freshman Aliyah Williams and junior Luka van der Merwe, competing as individuals for the Rebels, were tied for 76th at 10-over 82.

At Johann Memorial Field, Taylor Steinke scored once in each half to lead Colorado State past the Rebels 5-2 in a Mountain West match.

Marcella Brooks and Malika Markham scored for the Rebels, who held a 16-15 edge in shots. Colorado State had a 12-8 advantage in shots on goal.

Rebels backup goalkeeper Elly Reynada was pressed into action after starter Emberly Sevilla was injured Friday. Then Reynada was forced from Sunday’s match after a collision in the 63rd minute.

Colorado State opened a 3-0 lead in the first half on goals by Steinke, Liv Layton and Kristen Noonan before Brooks put UNLV on the board in the final minute before intermission.

Steinke scored again barely two minutes into the second half. Markham converted a pass from Katie Ballou in the 67th minute, and Lordemann capped the scoring in the 83rd.

At Johann Memorial Field, Jordi Cobo scored the tiebreaking goal in the 72nd minute to lift Houston Baptist past the Rebels 3-1 in a Western Athletic Conference match.

Timo Mehlich put four of his match-high eight shots on goal for the Rebels, who held an 11-7 edge in shots on goal.

Marco Gonzalez opened the scoring for UNLV in the 13th minute, with an assist by Nico Clausen. Houston Baptist tied it in the 23rd minute on a goal by Tim Ugo, assisted by Elijah Le.

Cobo’s goal put the Huskies up 2-1, and Thomas Menke capped the scoring in the 79th minute, with an assist by Gianluca Natera.

Enrique Adame had three saves for the Rebels.

At Riverside, Calif., sophomore Julia Filippova placed first in three events and was part of a winning relay team, and sophomore Ivan Zukov placed first in two events to lead the Rebels to a sweep of California Baptist on Saturday.