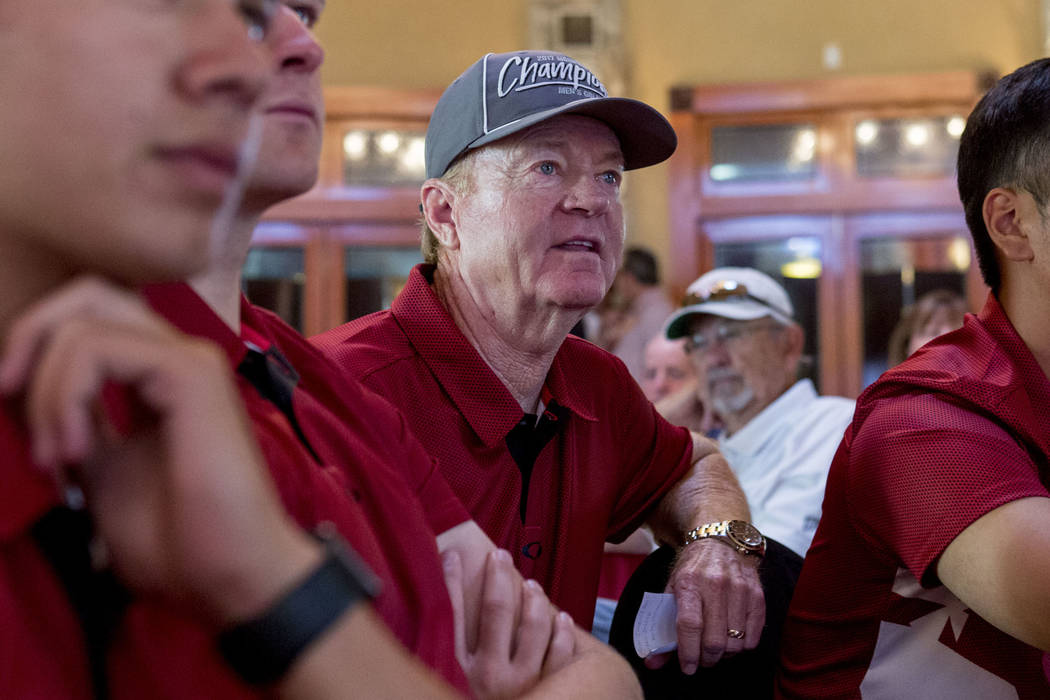 UNLV men's golf head choach Dwaine Knight, center, waits with his team to hear where they will be selected to play for regionals at the Las Vegas Country Club in Las Vegas, Thursday, May 4, 2017. Elizabeth Brumley Las Vegas Review-Journal @EliPagePhoto

UNLV was days from opening its men’s golf season when its best player dropped a shocker on the Rebels.

A season with such high hopes suddenly became one with many questions.

“We would’ve probably been a top-five team,” UNLV coach Dwaine Knight said. “We were really loaded. So that was a big drop-off for us. We didn’t play that well through the fall, and we had to really pick it up in the spring.”

As the Rebels began to find themselves, their play on the course noticeably improved. And now UNLV, which won three tournaments, including the Mountain West championship, since late February, is back to make a run at the national title.

The NCAA Championships begin Friday at Karsten Creek Golf Club in Stillwater, Oklahoma. No. 19 seed UNLV is grouped with No. 20 North Florida and No. 21 Kentucky the first two days. They tee off at 5:22 a.m. Friday and 10:42 a.m. Saturday.

“I think we’ve got a good team,” Knight said. “I just like this team. I like the way we’ve grown. We’ve got to go get it done here.”

UNLV is coming off a third-place finish in the NCAA regional in Columbus, Ohio, finishing at 15 over par and behind Oklahoma State (8 under) and Illinois (even).

The Ohio State course gave the Rebels some trouble, and Knight is hopeful that can be a learning experience.

“I felt like Columbus set up really well for us,” Knight said. “A really difficult golf course. I think we left a lot of shots out there, and I think we got a little frustrated. But I thought after our first round, we could really contend on that course. From that point of view, I don’t think we accomplished our goal of really contending for the championship, but I’m very glad that we advanced.

“This is another very hard golf course (at Oklahoma State), which should play into our hands. If we learned the lesson of patience, we’re going to make our share of birdies. We can compete.”

UNLV made a major push for the national championship last year, falling one shot short of making the Final Four.

Vanderbilt’s Theo Humphrey birdied the 90th and final hole to keep the Commodores alive in the tournament while sending UNLV home.

It’s a memory the Rebels can use as they tee off with dreams of adding a national title to the one they won in 1998.

“Our goal is to try to play for a championship each year,” Knight said. “This is going to be a really great test, and I think we’ve got the guys that can slug it out and be competitive coming down the line.”