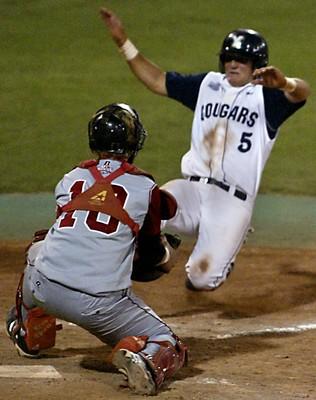 The Rebels rallied from a nine-run deficit before falling 10-9 to Brigham Young in the losers’ bracket of the Mountain West Conference Tournament at Wilson Stadium.

Scruggs’ homer highlighted a six-run seventh inning for UNLV, which trailed 10-1 after the fifth.

"I felt like I had a good chance to boost the team’s confidence," Scruggs said. "There’s no greater feeling than hitting a grand slam and putting your team right back in the game."

"I can’t say enough about the character our guys showed as they continued to fight," UNLV coach Buddy Gouldsmith.

The second-seeded Cougars (37-19) advanced to play the Horned Frogs (45-12) in the championship round at 3 p.m. today. BYU must beat TCU twice, with an automatic bid to the NCAA Tournament on the line.

Cougars starter Jordan Muir, a sophomore right-hander from Cimarron-Memorial High School, held the Rebels to two runs through six innings. He was pulled with the bases loaded, and Jacob Perez surrendered the grand slam to Scruggs.

"We had some seniors run into the dugout and basically say, we’ve come back and we’ve done this before," Gouldsmith said. "All they kept saying to each other was, ‘Don’t let it end.’ It was 18 long innings today."

Rebels senior left-hander Chris Saddoris turned in his finest performance of the year at the most opportune time in Friday’s first game.

Seniors Keith Smith and Ryan Kowalski were the offensive stars. Smith hit a solo homer, and Kowalski went 2-for-4 with a double and two RBIs.