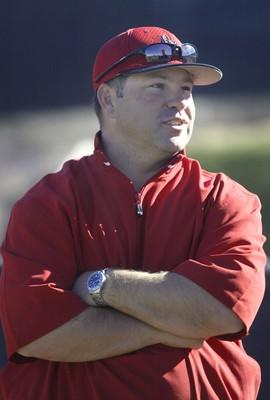 With three young kids to help raise, Buddy Gouldsmith has plenty of challenges in his personal life. Add his role as UNLV baseball coach, and the guy never gets a break.

Of course, Gouldsmith made life tougher on himself this season by lining up a schedule that includes every strong team on the West Coast but the Los Angeles Angels.

The Rebels, 14-23 and 3-6 in the Mountain West Conference, are taking their lumps. Their coach is making no excuses.

“We have not done our job,” Gouldsmith said. “We have not won enough games against the teams we need to beat, period.”

The next test is against the conference’s best team. UNLV opens a three-game series with Texas Christian (24-9, 7-1) at 7 p.m. Friday at Wilson Stadium.

The Horned Frogs are led by a familiar face, Jim Schlossnagle. In two years as the Rebels’ coach, Schlossnagle went 77-47. He left after the 2003 season and Gouldsmith, the top assistant, was promoted.

The Rebels won the Mountain West and appeared in the NCAA Regionals in Schlossnagle’s final season. Gouldsmith escaped from Schlossnagle’s shadow by winning the conference tournament and reaching the postseason in his first two seasons as coach.

But UNLV slipped to 29-30 last season, and TCU has become the league’s power program.

Gouldsmith and Schlossnagle remain close friends, but there is a considerable gap between their teams in the standings.

“We’ve got to pull it together,” Gouldsmith said. “There’s plenty of talent on this team to perform well, and the bottom line is you’ve got to do it.”

Gouldsmith’s theory is that for the Rebels to be an elite team, they must play elite competition. There have been no soft spots on the schedule, and because of the league’s unbalanced schedule, UNLV plays last-place Air Force only three times — in the last three games of the regular season.

The Horned Frogs are 5-0 against the Falcons.

The Rebels are 6-7 against ranked teams, with victories over Arizona, Cal State Fullerton, Pepperdine, San Diego and UC Irvine.

“We have a lot of quality wins,” said Gouldsmith, whose team also defeated California and Texas Tech.

The downside is UNLV was swept in three-game series by Cal Poly and UNR. Next week, the Rebels play three road games against defending national champion Oregon State.

“Maybe we’re guilty of wanting to be too good too fast, and we’ve played a ridiculously tough schedule,” Gouldsmith said. “After a while, it takes its toll on you. But the guys are competitive, and we’ve got to fight through that.”

The Rebels are 11-17 in games decided by three runs or fewer, including 7-10 in one-run games.

Skogley, a 30th-round pick by the Angels last summer, was expected to be the Rebels’ ace.

UNLV has been plagued by poor starting pitching, a lack of bullpen depth, defensive breakdowns and an inconsistent offense.

“I don’t even know that you can pinpoint one thing,” Gouldsmith said.