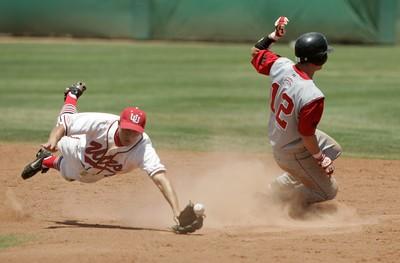 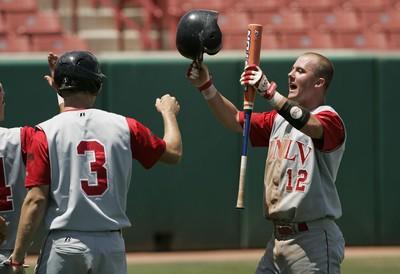 Waiting for something positive to happen was no longer an option for UNLV sophomore Xavier Scruggs. After four months of frustration, he was poised to end the waiting game.

Scruggs stepped to the plate, jumped on the first pitch he saw and became the X-factor for a team in need of a hero.

His tiebreaking single with one out in the 10th inning helped the Rebels rally for a 6-5 victory over Utah on Wednesday in the first round of the Mountain West Conference Tournament at Wilson Stadium.

"We came out here to make a huge statement," Scruggs said. "I believe everybody had faith and everybody knew we were going to get it done."

The regular season was littered with close losses and disappointment for the Rebels, but Scruggs said the power of positive thinking pulled them through against the third-seeded Utes.

"Coming in as the last seed, people probably don’t expect too much out of us," he said. "But we know what we’re capable of doing."

The outlook was bleak for UNLV until its three-run eighth inning. Keith Smith hit a two-out RBI double, and Blake Gailen’s two-run single tied the score 4-4.

Ryan Kowalski led off the 10th with a double, and after Smith walked, Gailen moved up both runners with a sacrifice bunt. Scruggs stepped up and lined a single to center off Utah’s Chad Cullers (4-5) to score Kowalski with the go-ahead run.

"I knew I had to try to drive something up the middle," Scruggs said. "My teammates and the crowd was cheering, and I had the adrenaline going."

Efren Navarro Jr. hit a sacrifice fly to drive in Smith for a needed insurance run.

"To win the tournament, you’ve got to win a nail-biter. We got a couple of clutch hits late and the guys battled back," Rebels coach Buddy Gouldsmith said.

Marc Baca (4-3) threw two scoreless innings to get the win, and Adam Moser got a dramatic save, his fifth of the season. Moser allowed one run on two hits and a walk in the 10th, but he struck out Corey Shimada with runners at the corners to end the game.

Scruggs made the score 1-0 in the fifth by ripping an RBI double off the right-field wall. But the Rebels stranded 12 runners through the first six innings.

UNLV junior right-hander Craig Heyer allowed four runs in the sixth. Heyer, who gave up 12 hits in 6 2 /3 innings, ran his pitch total to 108 before Gouldsmith went to the bullpen for senior left-hander Koji Pupo.

"We know we’ve got to win the tournament, and we had to try and stretch Craig out a little bit," Gouldsmith said. "We left all kinds of runners on early and I thought we had several opportunities to distance ourselves."

"One of the main things Coach emphasized is that we need to flush the first part of the season," Scruggs said. "I think we’ve got a good chance against TCU, believe it or not. Our team is going to be pumped."

"You couldn’t ask for a better matchup," Gouldsmith said.

The Lobos scored in the first on Matt Hibbitts’ RBI single.

• San Diego State 12, Utah 1 — The Aztecs (29-29) extended their season behind a superb start from Steven Hirschfeld, who threw a five-hitter and struck out nine to eliminate the Utes (24-31).