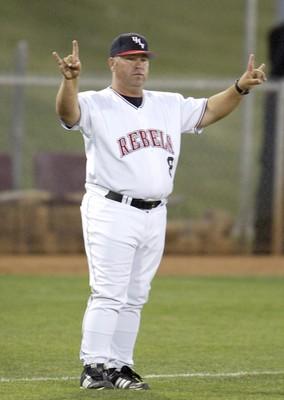 An unsettling season caused UNLV baseball coach Buddy Gouldsmith to lose a lot of sleep. He is keeping his job, however.

UNLV athletic director Mike Hamrick met with Gouldsmith on Tuesday and informed the coach he will be returning for a fifth year.

"Buddy will be back as our baseball coach next year," Hamrick said. "No one is happy, including Coach Gouldsmith, about this season, and we will do everything possible to turn that around.

"In meeting with Coach Gouldsmith, we both believe and agree that we have everything here necessary to win in baseball. We all expect a totally different season next year."

Gouldsmith, 125-119 in four years, has been on a one-year contract set to expire next month.

The Rebels finished sixth in the Mountain West Conference regular season. They went 2-2 in last week’s conference tournament and were eliminated by Brigham Young in the semifinals.

"It was a disappointing season across the board. It has been for a couple years now," Gouldsmith said. "We’ve got to get back on track. Win more, that’s the bottom line.

"We certainly have to evaluate every phase of the program."

Hamrick said he wants the program to rise to that level again. He also said Gouldsmith deserves to be complimented because his teams have had no academic or off-field problems.

The Rebels’ difficulties revolved around injuries, underachieving players and a schedule that allowed little margin for error.

"The schedule was very difficult, but nobody is making excuses about that," Hamrick said.

But that does not explain being swept by UNR in a three-game series or going 1-6 against BYU.

"We can’t just compete when Arizona and Pepperdine come into town," Gouldsmith said. "We’ve got to compete against everybody."

Gouldsmith said he is "still committed to playing a great schedule," but next year’s lineup of opponents won’t be so challenging. That’s mostly because of a rule pushing the start of the season back about a month to Feb. 22, allowing for fewer marquee nonconference matchups.

Junior first baseman Efren Navarro Jr. might also go in the draft. Navarro was expected to lead the starting rotation this past season, but an arm injury prevented him from pitching.

"I feel like the program is in good shape," said Scruggs, who tied Smith for the team lead in homers with nine. "We can come back and win the (MWC) tournament, and everybody is definitely going to be working hard in the offseason to get that goal.

"We are losing a lot of seniors. I feel like there is good talent coming in, and I know the coaches do their job in recruiting."

Gouldsmith said he will re-examine his team’s strength and conditioning program and recruiting strategies. He wants to create more competition at every position.

"It’s not like we haven’t been working," he said. "Things just haven’t gone our way."