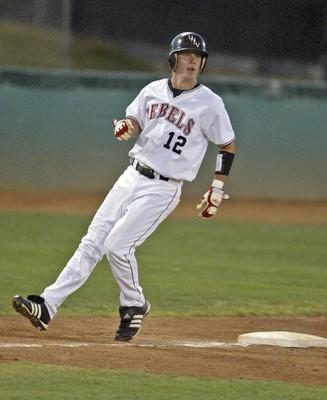 In his four years at UNLV, center fielder Ryan Kowalski has seen a lot of playing time for teams good and bad. But one of his biggest fans has rarely seen him in action.

Scott Waniewski missed half of his stepson’s college career while spending about 1 1/2 years employed in Iraq as a Navy lieutenant commander in charge of medical supplies.

"He told me it was a grind and you had to be mentally focused every day," Kowalski said.

Waniewski is back from the war and expects to be at Wilson Stadium at 11 a.m. today to watch Kowalski and the Rebels play Utah in the first game of the Mountain West Conference Tournament.

A loss would send sixth-seeded UNLV (22-34) to a losers’ bracket game against New Mexico or San Diego State at 7 p.m.

If the Rebels win, they advance to play top-seeded Texas Christian at 3 p.m. Thursday.

Baseball is no comparison to war, but Kowalski knows something about enduring a mental grind. His senior season at UNLV has been a constant struggle.

The Rebels are one loss from tying the school record set in 1982. Still, Kowalski is optimistic because of a four-game winning streak, even if those victories came at the expense of Southern Utah and Air Force.

"I could see people saying, ‘No, they’re not going to do anything.’ But we’re working hard, and I think everyone is mentally tough enough to think we can win this."

Kowalski, from University of San Diego High School, has been penciled into the starting lineup by UNLV coach Buddy Gouldsmith 176 times in his career, and he has played in 216 games.

He is batting .335 this season, second on the team, and has one home run, 38 RBIs and 16 stolen bases. He was named to the All-MWC first team Tuesday.

"Kowalski has been outstanding and exactly what you would expect out of a senior," Gouldsmith said. "He’s a guy you get a consistent effort out of all the time, and he’s been a clutch performer."

The Rebels won the conference tournament and made NCAA regional appearances in Kowalski’s first two seasons. But two losing seasons have followed.

Kowalski said his mother and three sisters, who live in San Diego, also plan to be in attendance today. He said his stepfather has been a big influence in his life since childhood.

While in Iraq, Waniewski followed Kowalski’s progress as closely as possible by listening to games on the Internet.

"He would call me every once in a while and we would talk about it," Kowalski said. "He would be up early in the morning, when we would be playing here at UNLV, sitting over there listening to the game. He wouldn’t miss a game no matter what."

• NOTES — The Rebels and Utes split six games this season. … The MWC announced the tournament will be hosted by TCU in 2008 and 2009.