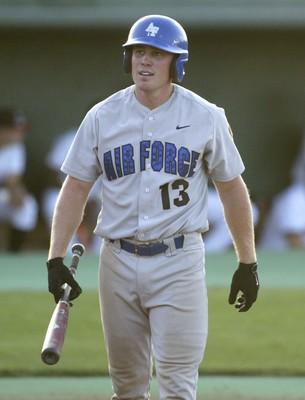 Dealing with disappointment is a part of life, and some handle it better than others. Karl Bolt, the best player on a bad Air Force baseball team, has been disappointed more times than he deserves.

Bolt’s college career ended Saturday with a one-run loss to UNLV, and he handled it well.

In his four years, the Falcons went 33-175, including 5-98 in the Mountain West Conference.

“It wears on you a little bit,” he said.

Bolt is one of the top hitters in the Mountain West, and he expects to be selected in the major league draft in June. But he will not be participating in the conference tournament this week in Las Vegas because only six teams are invited, and Air Force (8-44, 0-23) finished seventh.

It merits asking if the Falcons should compete in the Mountain West or even field a baseball team at all.

“Sure, it’s been a rough four or five years now, but I honestly believe that this team can compete in the Mountain West Conference,” Bolt said. “It’s hard to see right now.

“This team is young. I think these guys will pick it up in the next year or two and turn the program around.”

Talk about a tough job, and Air Force coach Mike Hutcheon has one. When he took over four years ago, the team he inherited lost 18 seniors.

“I think we can compete. I don’t think we could ever consider ourselves as a team that could win the Mountain West regular season,” said Hutcheon, whose Falcons finished 6-49 and 0-28 in the league in his first year. “For us to be able to finish in the top three or top four would be an unbelievable accomplishment.”

“The education is great, I had a chance to start as a freshman, and it just seemed like a great opportunity,” Bolt said. “I wouldn’t change it.

“The grueling aspect of school work and military and trying to balance all of it … it’s difficult. It’s a long day; it really takes a special kind of person to come to an institution like this and still play a Division I sport.”

Bolt said Hutcheon and his staff are working intensely on recruiting.

But at the Academy, only exemplary students are accepted, and playing baseball is not their primary focus.

“We’ve got to recruit better players, and there’s a lot of restrictions when it comes to recruiting,” Hutcheon said. “It’s hard to get guys who are Division I players to commit to your program when there are a lot of other options out there.

“We’re getting guys who a lot of people don’t recruit, Division II-type players, and we’ve got to make them into Division I players.”

After graduation, he will be a logistics officer at Robbins Air Force Base in Georgia. But because he has a five-year service commitment, he must be granted an exception to play pro baseball. He said the Academy’s administration has been supportive.

“In no way am I trying to get out of my service commitment,” he said, “but I’d love to keep playing baseball, too.”

Hutcheon started six freshmen at times this season. Bolt called it a test of mental toughness.

But they also dropped 12 games by two runs or fewer, including two one-run losses to UNLV.

“I don’t care what their record is, you’re going to get an unbelievable effort out of all those kids,” Rebels coach Buddy Gouldsmith said.

Bolt looks back with no regrets.

“We’ve had four rough years here, but I’ve made some of the best friends of my life, and we’ve had some great times together, even though we haven’t won many games,” he said. “That’s life.”