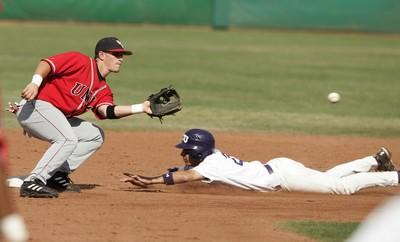 It could have been a tough day for Texas Christian ace Jake Arrieta. His left ankle was injured, and his right arm was not as strong as usual.

But he still made his work look easy.

Arrieta threw seven scoreless innings in an 8-1 victory over UNLV on Thursday in the second round of the Mountain West Conference Tournament at Wilson Stadium.

"I definitely felt like I was in control," said Arrieta, who allowed four hits and no walks and struck out six. "I think I did a good job without my best stuff."

The Cougars saved their ace, senior right-hander Jesse Craig, for the showdown with TCU. Craig, a 2001 graduate of Basic High School, is 10-2 with a 2.80 ERA.

"He’s as good a pitcher as we’ve seen all year," Horned Frogs coach Jim Schlossnagle said of Craig. "It’s good for us. I’m glad he’s pitching, because our guys tend to get excited about that kind of challenge."

Craig was voted the conference’s Pitcher of the Year. Arrieta, a first-team selection, is 9-3 with a 2.89 ERA after shutting down the Rebels.

Rebels junior left-hander Kevin Skogley served up a leadoff home run to the Horned Frogs’ Clint Arnold and trailed 2-0 after the first inning.

In the third, Arrieta rolled his ankle and fell while fielding a grounder. He was in pain and deliberated before deciding to stay on the mound.

"I really didn’t want to come out of the game," Arrieta said. "I wanted to stay in there and compete, even if I wasn’t 100 percent."

TCU rocked Skogley (3-6) in the bottom of the inning, as Keith Conlon hit a two-run homer and Austin Adams followed with a solo shot. Skogley allowed five runs, four earned, in two-plus innings.

UNLV had a chance to hurt Arrieta in the sixth by loading the bases with no outs. But Arrieta set down Ryan Kowalski, Keith Smith and Blake Gailen to end the threat.

"We had opportunities to get back in the game. You’ve got to find a way to scratch a couple runs right there," Rebels coach Buddy Gouldsmith said. "We haven’t had the clutch hitting that we’ve needed all year long, and that’s a perfect example."

Arrieta beaned UNLV’s Xavier Scruggs in the head to start the seventh. Scruggs was OK, but he was clearly unhappy with Arrieta. In the sixth inning, Scruggs traded words with TCU’s Bryan Kervin after he slid hard into third base and Scruggs tagged him out.

"With the situation at hand, I guess (Scruggs) thought it might have been intentional," Arrieta said. "But it was a curveball, and it just kind of got away from me. It happens."

The Rebels, who made four errors in the game, scored in the ninth on senior Chris Bonnell’s groundout.

The Horned Frogs won the conference tournament last year under Schlossnagle, who coached UNLV to the title in 2003.

Gouldsmith, who coached the Rebels to the tournament title in 2004 and 2005, dropped to 0-8 against Schlossnagle the past two years. Schlossnagle said it was no thrill to beat his former assistant.

"It’s not so much UNLV, it’s Buddy. I really don’t like playing friends. It’s not fun," Schlossnagle said. "I know how I feel when you lose a game, and I wouldn’t wish that on anybody, especially my best friend."

• Brigham Young 5, New Mexico 3 — Jake Wortham threw 7 2/3 innings, and that was enough to get the win for the Cougars, who erased a 3-2 deficit by rallying for three runs in the seventh.