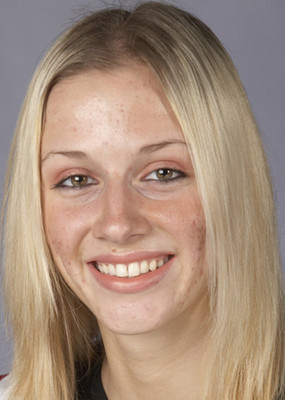 When Maria Aladjova arrived at UNLV in 2004, things did not look good for the Rebels’ volleyball team.

The program was in transition after an 11-17 season. New coach Allison Keeley was promising to turn things around, but it appeared any improvement might take years to achieve.

None of that seemed to bother Aladjova, who tuned out the turmoil to win Mountain West Conference Freshman of the Year honors. Despite the long odds, the outside hitter from Sofia, Bulgaria, predicted UNLV soon would contend for a league championship.

In her senior season, Aladjova’s forecast finally is being realized. The Rebels routed then-No. 12 Brigham Young at home in three straight games Thursday, arguably the most significant victory in the program’s history.

"That was very big," said Aladjova, who noted the Cougars had won 10 straight matches between the teams since 1998. "Since I’ve been here, we had never beaten them. We would just lose, lose, lose."

Aladjova, long the team’s leader, said she had seen enough.

"I felt we could beat them," she said. "Before the game I was so prepared. I was ready to beat them by myself."

The Rebels went on to beat perennial MWC power Utah in four games Saturday, raising their record to 10-1 overall, 2-0 in the league, and sparking Aladjova to conference player of the week honors for the second time this season.

She thought the victories would propel UNLV into the top 25 in the weekly Division I CSTV/American Volleyball Coaches Association poll. The Rebels just missed, coming in at No. 26 Monday with 92 points, 23 fewer than No. 25 New Mexico State. BYU (7-3) dropped to 17th.

"The rankings are very important," Aladjova said. "Not only for an NCAA (Tournament) bid, but also for people to respect UNLV."

Keeley, whose team has a school-record nine-match winning streak, agreed.

"We’ve got to have those significant wins," she said. "BYU was one of those, and Utah also was an important win."

UNLV failed to win such matches last season. Though the Rebels went 10-6 in the conference, they were shunned by the NCAA Tournament selection committee in November after going 0-4 against BYU and Utah.

This year, they hope to gain the automatic bid by winning the Mountain West tournament.

Aladjova, the only Rebel to make the All-Mountain West preseason team, said her teammates are beginning to believe they can do it. She expects to be the architect of that success.

"I really want to win the conference," Aladjova said. "I want to leave a mark here. The other day, someone told me, ‘You’ve got to be the man,’ and I do feel like if I pump up my teammates, they’ll play better."

Aladjova acknowledges there will be other hurdles. Beating BYU and Utah on the road in November will not be easy; the Rebels historically play their best at Cox Pavilion. And the conference has plenty of other strong teams. Colorado State is 6-3, and San Diego State looks solid at 9-3.

The Rebels visit San Diego State on Friday before playing their final nonconference match at No. 22 Santa Clara on Sunday.