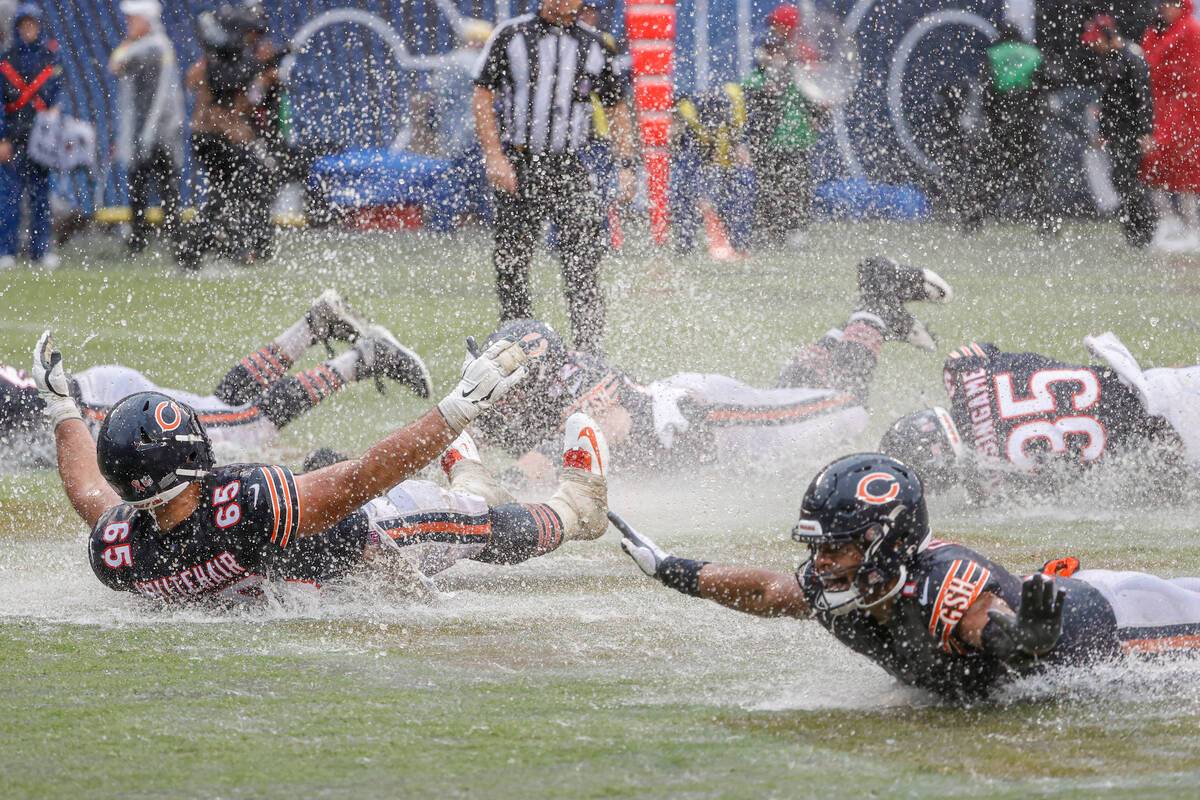 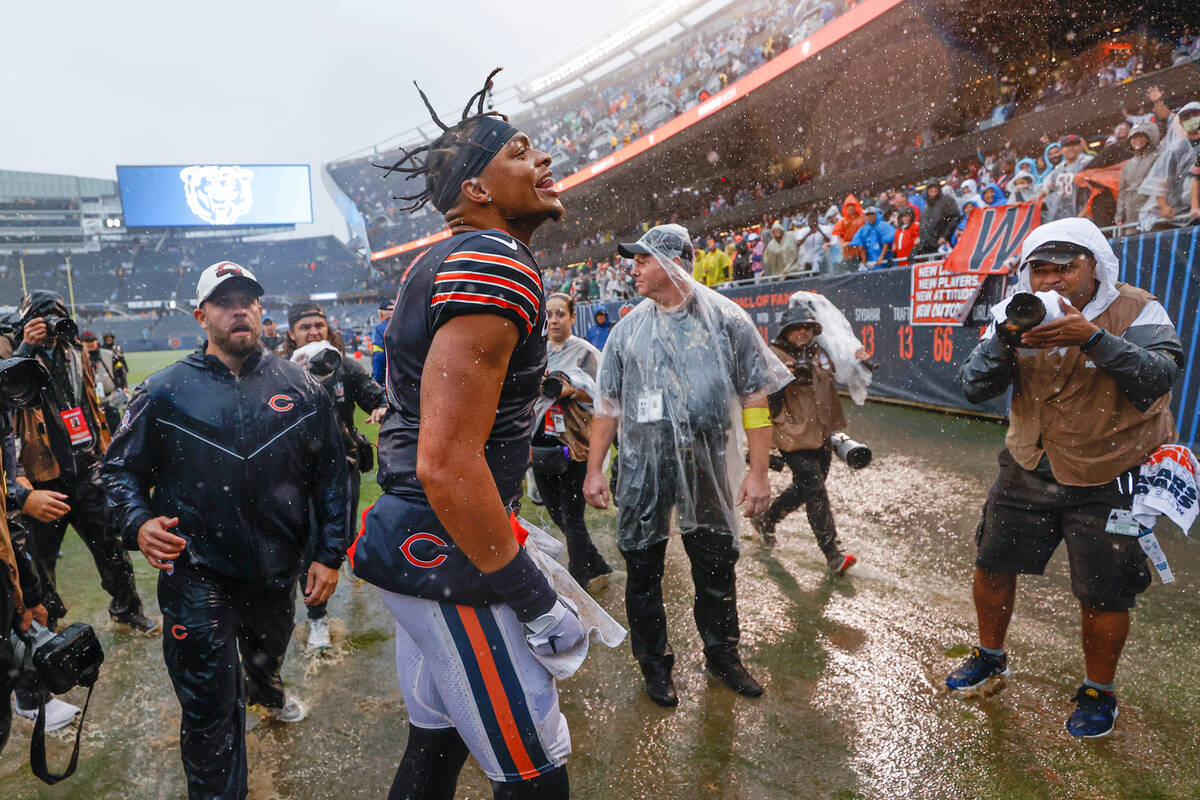 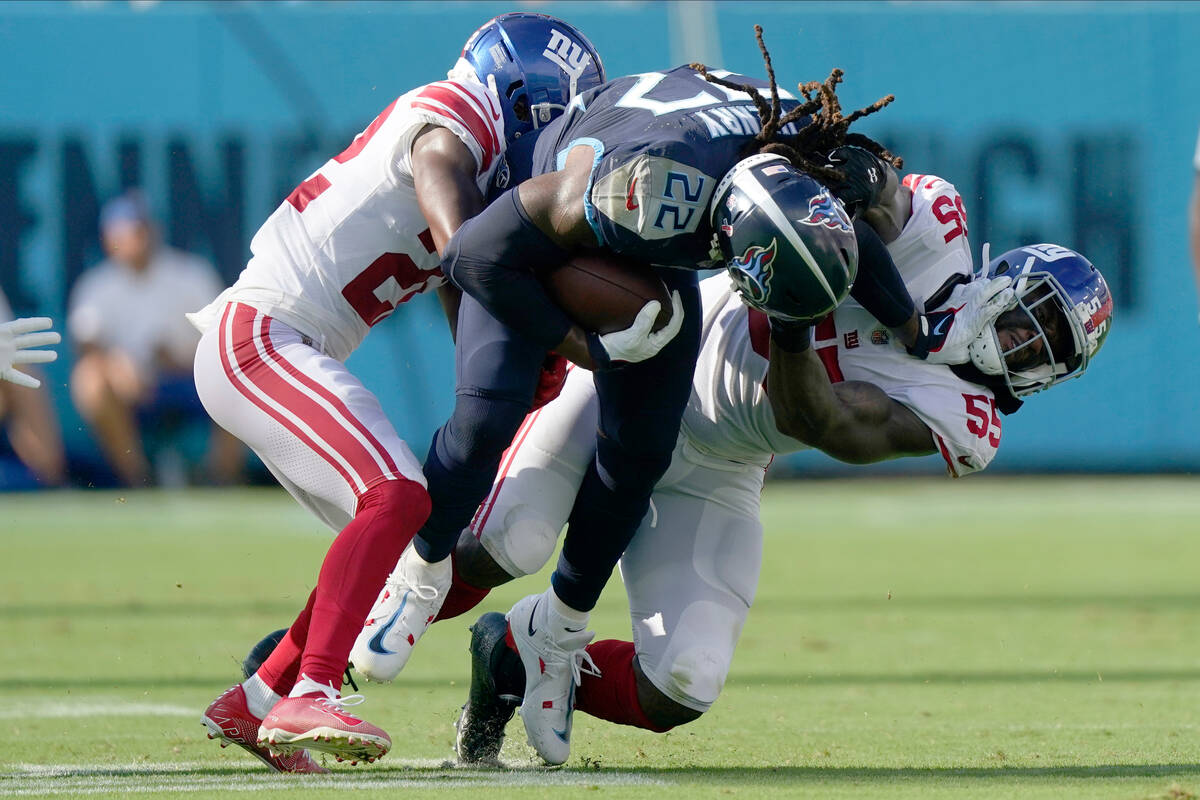 Tennessee Titans running back Derrick Henry (22) is taken down by New York Giants cornerback Adoree' Jackson (22) and linebacker Jihad Ward (55) during the first half of an NFL football game Sunday, Sept. 11, 2022, in Nashville. (AP Photo/Mark Humphrey) 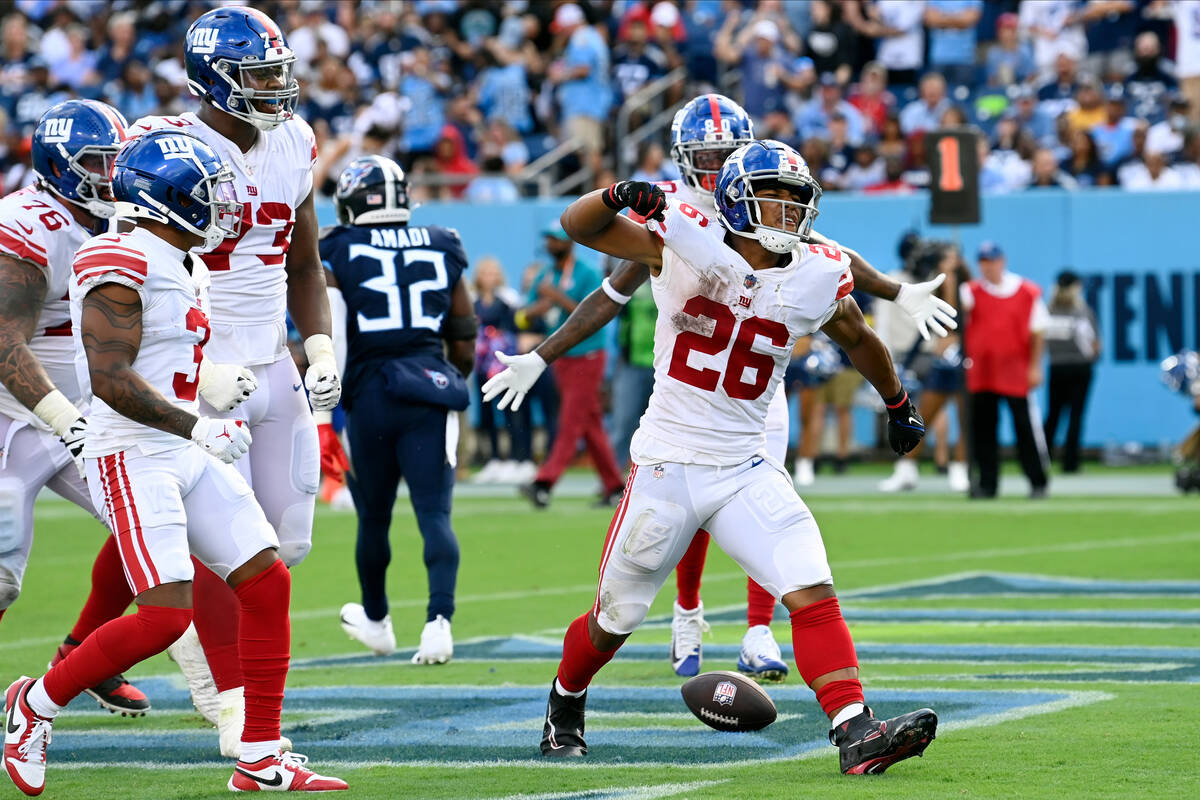 New York Giants running back Saquon Barkley (26) celebrates after making a touchdown run against the Tennessee Titans during the second half of an NFL football game Sunday, Sept. 11, 2022, in Nashville. (AP Photo/Mark Zaleski) 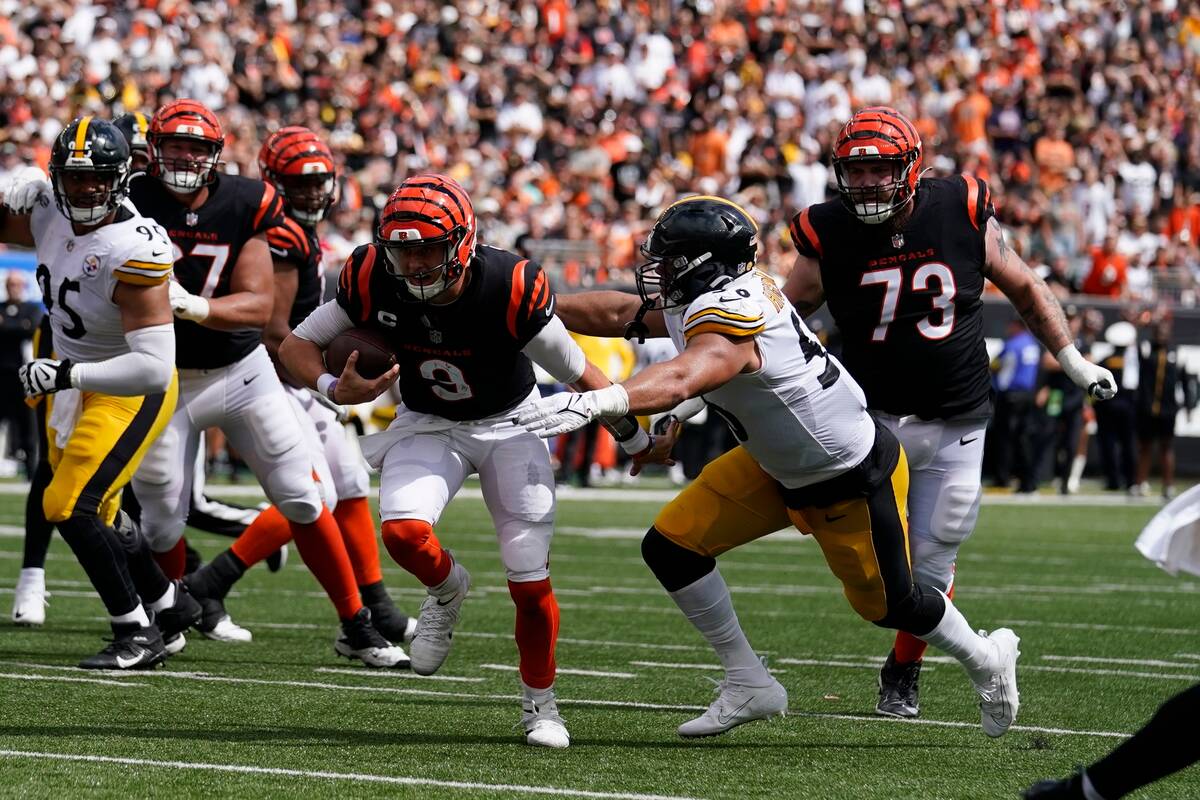 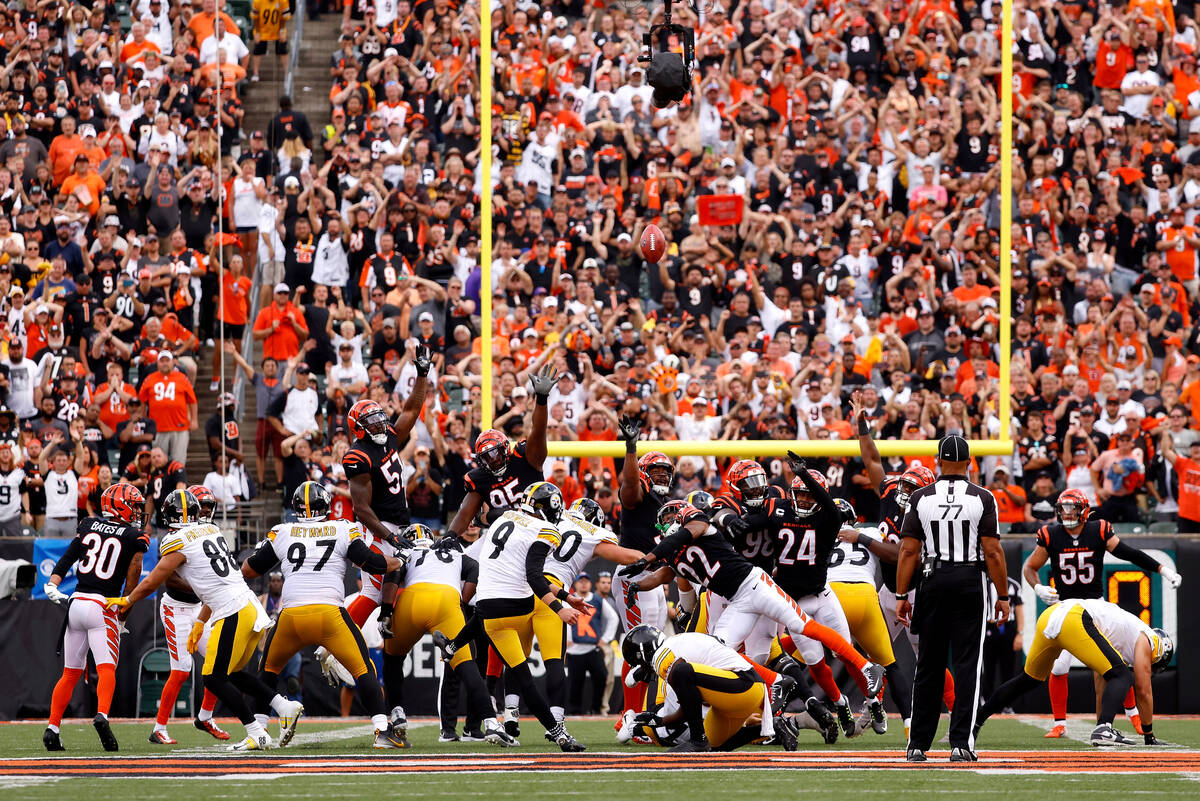 The NFL kicked off the season in earnest Sunday with a wild Week 1 that featured a tie, four outright upsets, five games decided in the final minute and countless missed kicks.

The Steelers stunned the Bengals in overtime as 7-point underdogs, the Bears (+6½) beat the 49ers, the Giants (+5½) topped the Titans and the Texans (+7) tied the Colts.

“The NFL strikes again in the unpredictability right off the bat,” Caesars Sportsbook assistant director of trading Adam Pullen said. “The uncertainty of the NFL. That’s the way it’s been for years, and it’s already throwing people for a loop.

“Anytime the Bears and Giants win outright on the same day, that’s usually a good outcome for our side of the counter,” Red Rock Resort sportsbook director Chuck Esposito said.

Ain’t that a kick in the head

The Giants went ahead 21-20 with 1:06 left on a touchdown and two-point conversion pass by Daniel Jones. They held on when Randy Bullock missed a 47-yard field-goal try as time expired.

There were several botched kicks in Pittsburgh’s 23-20 win at Cincinnati, which tied the game 20-20 on Joe Burrow’s touchdown pass to Ja’Marr Chase with two seconds left. Evan McPherson’s extra-point attempt was blocked, and he then shanked a potential game-winning 29-yard field goal in overtime after a high snap.

“We don’t usually see shanks like that on Sunday. We definitely see them on Saturday,” SuperBook vice president Jay Kornegay said. “Some crazy things took place. It’s great to have the NFL back.”

After Steelers kicker Chris Boswell’s 55-yard field-goal attempt hit the left upright, he got a chance to redeem himself and booted a 53-yarder as time expired to lift Pittsburgh to victory.

After Indianapolis rallied from a 20-3 deficit to tie the game at 20, it had a chance to win in overtime. But Rodrigo Blankenship sunk all teasers, money-line bets and Survivor picks when he missed a 42-yard field-goal attempt wide right.

“That was an epidemic (Sunday), missing the easy field goals. It cost a lot of teams,” MGM Resorts director of trading Lamarr Mitchell. “That’s what makes this game and Sundays exciting. The first Sunday is like the first day of the college basketball tournament in March.

“Everyone in the room is screaming their heads off.”

At least one kicker was clutch. Cade York nailed a 58-yard field goal with eight seconds left to give Cleveland (+1½) a 26-24 win over Carolina and former Browns quarterback Baker Mayfield.

Bettors in Las Vegas loaded up on the Raiders (+3½), who failed to cover in a 24-19 loss at the Los Angeles Chargers that stayed under the total (52). BetMGM won six figures on the game, and it was the biggest win for the South Point and the SuperBook.

“That was, by far, our biggest handle of any game,” Kornegay said. “It doubled a lot of the games.”

The biggest winners for bettors were the Ravens (-6½), who rolled to a 24-9 win over the Jets; and the Chiefs (-6½), who crushed the Cardinals 44-21 behind five touchdown passes by Patrick Mahomes.

“You can clearly tell a lot of these guys haven’t played in the preseason and were definitely rusty,” Esposito said. “However, it didn’t look like Patrick Mahomes missed a beat whatsoever the way that offense looked.”

The Vikings, who beat the Packers 23-7, were one of the biggest winners for bettors at most books. But they were a six-figure winner for BetMGM.

“A lot of our big players were on the Packers,” Mitchell said.