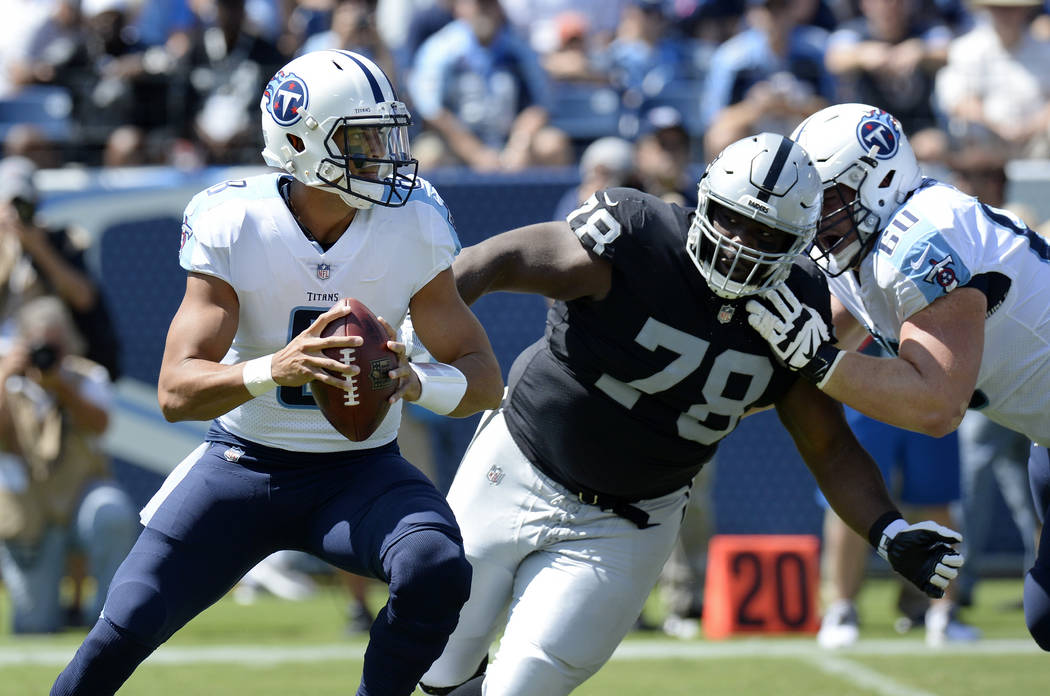 Raiders coach Jack Del Rio was supposed to be the gambler on the sidelines Sunday at Tennessee.

After all, Del Rio successfully went for two points and the win in Oakland’s 2016 season opener in New Orleans when an extra point would’ve tied it. But Tennessee coach Mike Mularkey was the one who rolled the dice in Nashville, opening the season with an onside kick.

The bold move backfired, however, as the Raiders recovered the kick, scored a quick touchdown and never trailed in a 26-16 win and cover over the Titans.

“It surprised everybody,” Boyd Gaming sports book director Bob Scucci said. “But when you don’t succeed on a risky move like that, it can set the tone for the game and having the Raiders score right after that hurt them.”

Sharp bettors were all over Tennessee, which was a 1½-point underdog at one point this offseason before closing as 2½-point favorites.

The Titans were the top consensus pick in the $5,000-entry Westgate SuperContest Gold and also were one of the top selections in the $1,500-entry SuperContest — in which the top six consensus picks went 0-6: Bengals, Texans, Titans, Falcons, Cardinals and Steelers.

Seven months after Atlanta’s epic meltdown in Super Bowl LI, the Falcons almost blew another double-digit fourth-quarter lead before escaping with a 23-17 win over the Bears, who had four shots from the 5-yard line in the final seconds.

But Atlanta, which closed as a 6½-point favorite, couldn’t escape the dreaded Super Bowl hangover that has seen the losers go 2-16 against the spread in the following season opener.

“I’m assuming an outright Chicago win was a seven-figure swing,” William Hill sports book director Nick Bogdanovich said. “Money-line parlays and teasers with Atlanta was mind-boggling. It would’ve been nice to punch it in on first-and-goal but beggars can’t be choosers.”

The sharps were on the Bears, but the betting public lost on the Falcons and two other popular favorites in the Steelers and Texans as Las Vegas sports books enjoyed a good day.

The Jaguars, 6-point underdogs, had 10 sacks and forced four turnovers in a 29-7 win at Houston.

Pittsburgh bettors, laying 10 points at Cleveland, were burned by a back-door cover in a 21-18 win.

The Browns scored on DeShone Kizer’s 3-yard touchdown pass with 3:36 left and added a 2-point conversion to make it a 3-point game, before the Steelers ran out the clock.

“The two biggest games on the board were the Steelers-Browns and Falcons-Bears,” Scucci said. “To have both underdogs cover, that was pretty much the whole day right there.”

The Browns, coming off a 1-15 season, opened the game in familiar fashion, going three-and-out before the Steelers blocked the ensuing punt and recovered it for a touchdown.

“The way the first series started, it seems like the Browns of last year,” Scucci said.

The Bills rewarded most of their backers in a 21-12 win over the lowly Jets. Buffalo opened as a 6-point favorite in the offseason and the line climbed as high as 9½ before closing at 7½. The Bills stopped a 2-point conversion try and then scored a touchdown early in the fourth quarter to cover.

The sharps lost on the Jets and the 49ers, who played dead in a 23-3 home loss to the Panthers, who closed as 5-point favorites. Cam Newton looked rusty, but threw two TD passes following Brian Hoyer turnovers as the San Francisco offense remained anemic under new coach Kyle Shanahan.

Why would the wiseguys bet on two of the NFL’s worst teams in the Jets and 49ers?

Favorites went 2-6 ATS in the morning games but covered the final four to finish 6-6, capped by the Cowboys’ 19-3 win over the Giants, who looked hopeless without injured receiver Odell Beckham Jr.

The betting public didn’t fare well on totals as 10 of the 12 games went under. But the excitement level at Las Vegas sports books still was off the charts.

“It was electrifying,” Avello said.

Scucci expected the Raiders to regress this season after winning five games by three points or less last year. But after another unpredictable NFL Sunday, he’s not so sure.

“They won so many close games last year. A lot of times that stuff balances out the following year,” he said. “But they looked like a Super Bowl team.”