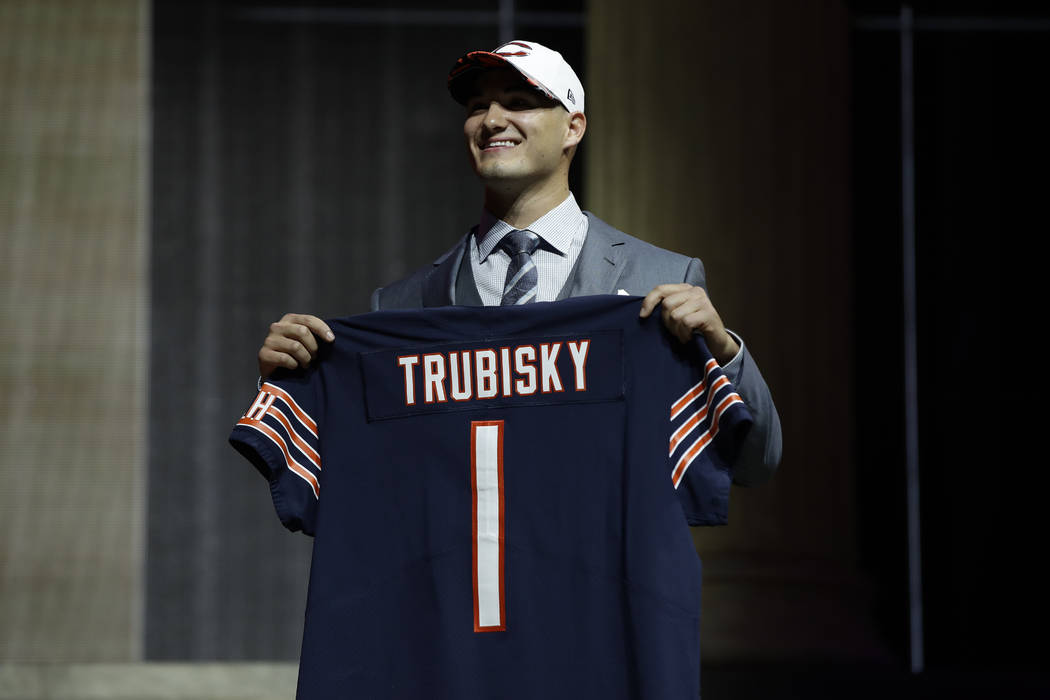 North Carolina's Mitch Trubisky poses after being selected by the Chicago Bears during the first round of the 2017 NFL football draft, Thursday, April 27, 2017, in Philadelphia. (AP Photo/Matt Rourke) 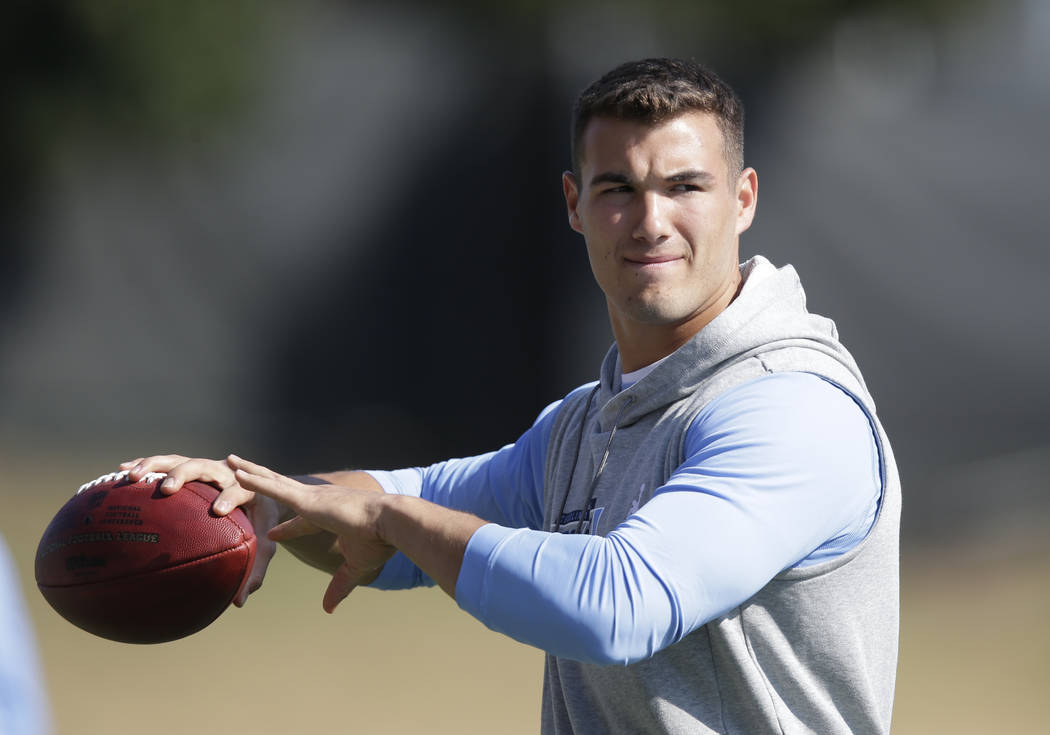 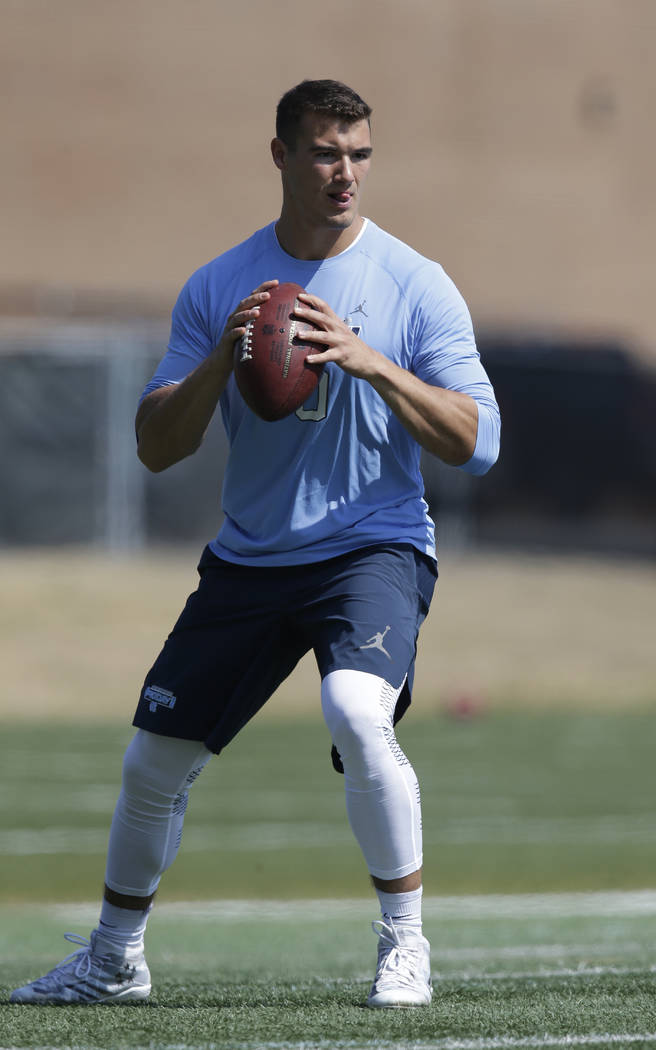 The Cleveland Browns were winners in the first round of the NFL draft, and so were Las Vegas bookmakers, who took action on the event for the first time.

The handle on the menu of NFL draft prop bets was comparable to a marquee MLB game, but several sports book directors said they were pleased with the interest shown by the betting public.

“It lays the foundation for down the road to be very, very big,” William Hill sports book director Nick Bogdanovich said. “It exceeded all expectations by a mile. I was very happy.

“We’ll try to get more creative next year and put more stuff up and get it out earlier.”

Betting on the NFL draft is the latest in a growing string of wagering on off-field events approved by the state’s Gaming Control Board that includes the Heisman Trophy and Super Bowl MVP award. The NBA draft might be next.

“More than anything else, it created so much more media interest and water-cooler chatter,” Sunset Station sports book director Chuck Esposito said. “There was good two-way action on most of the props.”

Bettors cashed at Station Casinos on over 2 Louisiana State players (minus-130) selected in the first round and at William Hill on over 2.5 LSU players (plus-125) when Tigers cornerback Tre’Davious White was picked by the Bills with the 27th pick.

“They did bet over two LSU players in the first round,” Esposito said. “We were rooting for 2 for the push.”

LSU running back Leonard Fournette went No. 4 to the Jaguars, and safety Jamal Adams went sixth to the Jets.

The most popular prop was the total of 3.5 quarterbacks selected in the first round. Under bettors cashed their tickets. The over (plus-205) looked promising when the Bears traded up for Mitch Trubisky at No. 2, the Chiefs traded up for Patrick Mahomes at No. 10 and the Texans traded up for Deshaun Watson at No. 12, but no other quarterbacks were selected.

Two running backs were selected in the first eight picks in Fournette and Stanford’s Christian McCaffrey, but teams passed on Dalvin Cook and Joe Mixon as bettors cashed under 2.5 running backs (plus-280) at William Hill.

Three wideouts went in the top nine picks, but no others were selected in the first round, as that prop pushed at 3.

The Browns didn’t get a quarterback, but they came away with Texas A&M defensive end Myles Garrett (No. 1), Michigan safety Jabrill Peppers (No. 25), Miami tight end David Njoku and the Texans’ 2018 first-round pick.

Garrett was the first of 12 Southeastern Conference players selected, which cashed over 10.5 (minus-210) at William Hill and over 11 at the Westgate (minus-120) and Station Casinos (even).

The total number of Alabama players selected in the first round stayed under 4.5 (even) when the Saints selected Wisconsin tackle Ryan Ramczyk with the 32nd and final pick instead of Crimson Tide tackle Cam Robinson.

Another popular prop on which round the first place-kicker will be picked has yet to be decided. Rounds 1-3 is plus-340 at William Hill, and rounds 4-7 is the minus-420 favorite. At the Westgate, bettors backed rounds 1-5 at plus-145. Rounds 6 and 7 are minus-165.

“The kicker one received a lot of attention from bettors. It’s very lopsided. They were betting (rounds) 1-5,” Westgate sports book director Jay Kornegay said. “We’re telling them it’s just like fantasy football. You always want to wait on kickers.”

Puck of the day

Handicapper Alex Smith (AxSmithSports.com) recommends a play Friday on the Oilers-Ducks over 5 (minus-140). Edmonton beat Anaheim 5-3 in Wednesday’s semifinal series opener, when the teams combined for six third-period goals.

“The way these teams played, we’ll see a lot of back-and-forth scoring from both teams,” he said. “Their goaltending is decent at times, but it’s not a top goaltending matchup.”