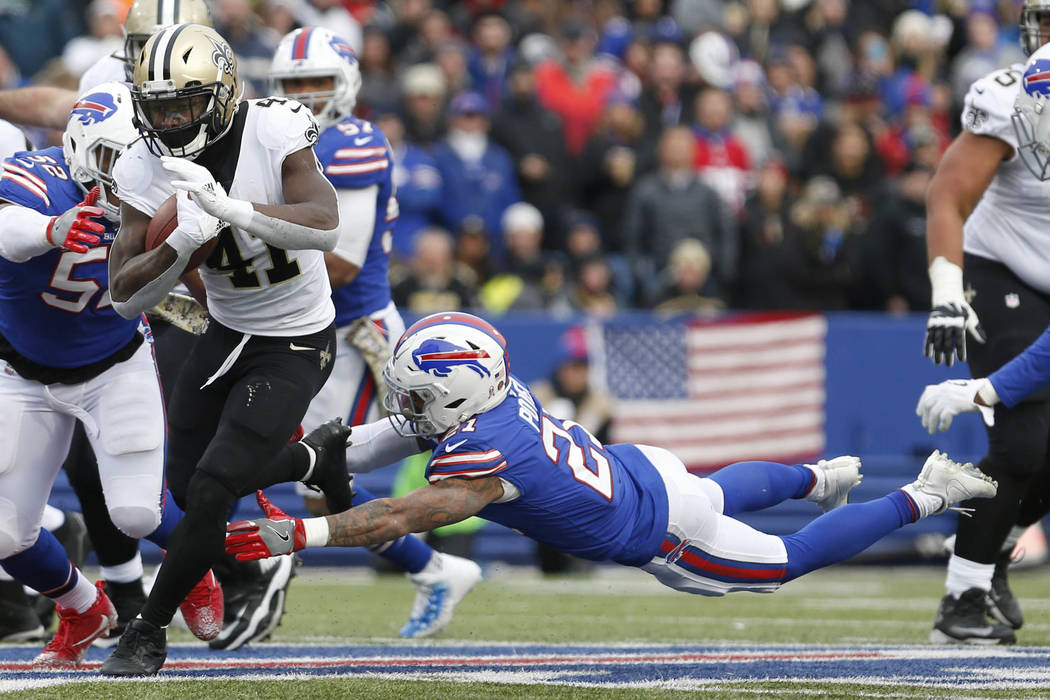 Beware of the popular public underdog.

That’s one of two valuable sports betting lessons we learned Sunday, when we were among the masses that backed the Buffalo Bills as a 2- to 3-point home underdog to the New Orleans Saints.

The top consensus play in both the Westgate SuperContest and SuperContest Gold, the Bills were whipped 47-10 by the Saints, who rolled to their seventh straight win in what was the biggest decision in the morning games for Station Casinos.

“They were on the Bills, big time, to win on the money line and point spread,” Sunset Station sports book director Chuck Esposito said. “The public, historically, will look at the favorite. But if there’s a live underdog and value there, they’ll look to play them, too.”

Wagers on Buffalo turned out to be worthless as it lost its first home game. Saints quarterback Drew Brees didn’t throw a touchdown pass but didn’t need to as New Orleans rumbled for a franchise-record six rushing TDs.

“You’ve got to look at the Saints as a legitimate contender because of their defense and running the ball,” Esposito said. “It’s a huge contrast in style for Sean Payton-Drew Brees teams.”

“It was Saints money Monday through two hours before kickoff,” he said. “When we went to 3, it was nonstop on the Bills.”

Hip to be square

The other lesson we learned was that it’s better to be called a square than a loser.

The pros bet the Patriots down from a 7½-point favorite but the books still needed the Broncos because of all the parlays and teasers tied into New England.

“We had a really solid day despite not having a true upset,” Westgate sports book director Jay Kornegay said early in the Patriots-Broncos game. “If the Patriots cover this game, we’re going to give a big chunk of it back.”

What Browns can’t do for you

The Browns, coming off a bye, appeared poised to cover, if not win, their first game of the season when they took a 24-17 lead late in the third quarter. But Detroit scored the final 21 points of the game on three Matthew Stafford TD passes and DeShone Kizer threw an interception in the end zone with 1:19 remaining to end Cleveland’s bid for a backdoor cover.

The Browns also blew a chance to score in the final seconds of the first half when, with no timeouts left, Kizer was stopped on a quarterback sneak at the Detroit 2 and time expired before they could stop the clock.

In the best decision of the day for bettors, the Rams (7-2) exploded for 21 straight points in the third quarter en route to a 33-9 win and cover over the Houston Texans. It was the fourth straight win and cover for Los Angeles, which has outscored opponents 36-11 during the streak.

“The Rams are surprising. A lot of people whom I respect saw this coming. I did not,” Vaccaro said. “I thought they’d be improved. But they’ve been monsters.

Books cash in on Colts, 49ers

New York, which opened as a 1½-point underdog, was a so-called sharp play.

Pittsburgh didn’t lead until the final play of the game and its talent-laden offense has yet to score 30 points in a game this season.

On the flip side, Colts backup quarterback Jacoby Brissett threw a pair of 60-yard-plus TD passes to give Indianapolis a 17-3 lead.

“This year, compared to last year when there was a higher percentage of favorites winning, there’s a lot more parity in the NFL week to week,” Esposito said. “A lot of underdogs are playing really, really well.”

Except, of course, Buffalo, which is suddenly starting to resemble the same old Bills.