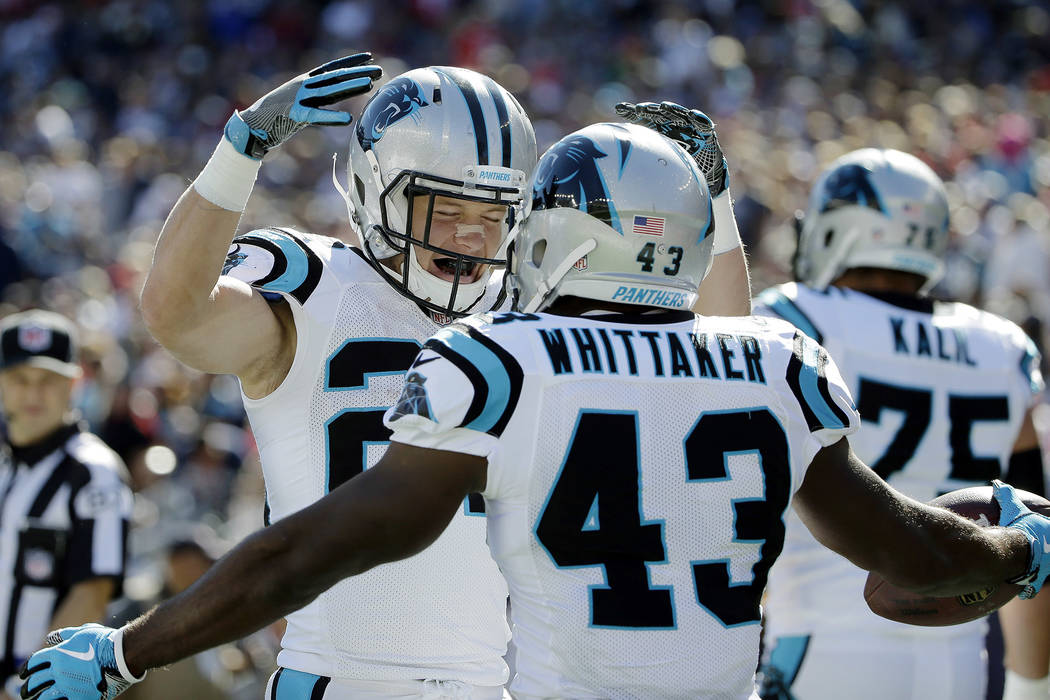 Carolina Panthers running back Fozzy Whittaker, foreground, celebrates his touchdown against the New England Patriots with Christian McCaffrey, left, during the first half of an NFL football game, Sunday, Oct. 1, 2017, in Foxborough, Mass. (AP Photo/Steven Senne)

Through the first month of the NFL season, the biggest surprises are the 3-1 Bills and the 3-1 Rams, while the Patriots and Falcons could each easily be 1-3.

Buffalo, behind the league’s top-ranked defense, upset Atlanta 23-17 as a 9-point underdog on the second straight NFL Sunday that went to the ’dogs for much of the betting public. Underdogs went 9-5 against the spread with seven outright wins.

Besides the Bills’ win over the Falcons — who were stopped at the Buffalo 10 with less than a minute remaining — the Panthers beat the Patriots 33-30 as 9½-point underdogs and the Rams clipped the Cowboys 35-30 as 5½-point underdogs.

“The biggest games for the books were the Panthers and Bills winning outright, which knocked out a ton of money lines and teaser bets,” Sunset Station sports book director Chuck Esposito said.

While we tore up our two-team teaser on Atlanta and New England over a plate of cold nachos, a CG Technology bettor cashed a $2,000 two-team money-line parlay on the Bills (plus-340) and Panthers (plus-400) that paid $42,000.

The Patriots’ suddenly porous defense, allowing 32 points per game this season, made Cam Newton look like he was still in pregame warmups as the Carolina quarterback completed 22 of 29 passes for 316 yards and three TDs after being off target all season.

New England looked like a solid play on the in-play odds at 5-1 when they trailed 30-16 early in the fourth and then tied it at 30-all with 3:09 left. But they never got the ball back as the Panthers marched downfield to set up Graham Gano’s winning 48-yard field goal as time expired.

Buffalo — which replaced the Ryan brothers, Rex and Rob, with coach Sean McDermott and defensive coordinator Leslie Frazier — forced three turnovers in holding the Falcons to 17 points or less at home for the first time since 2015.

“The Bills defense is for real,” Simbal said. “I’m not saying they’re a playoff team, but as long as the defense holds up, an eight- or nine-win season is possible, for sure.”

The Rams were a big sharp play, with wiseguy money driving the line down from Cowboys minus-8 to as low as minus-5 at some books.

“The last couple years, the Rams were sharp handicappers’ trendy picks to cover a lot of games,” Scucci said. “They felt they were a team on the verge. They always had a good defense. They just needed a couple pieces with a running game and an effective quarterback.”

“It’s a bit of an indictment of the previous coaching staff. They really got nothing at all from Goff, and Goff has been one of the best quarterbacks in the league this year, as crazy as it sounds,” Simbal said. “The NFC is so wide open, why can’t the Rams be the best team in the NFC?”

The Jets won and covered for the second straight week, albeit in a ugly 23-20 overtime victory over the Jaguars, who were 4½-point favorites.

The Giants covered as 2½-point underdogs in a 25-23 loss at Tampa Bay but fell to 0-4 overall — along with the Chargers, 49ers and Browns — after losing on a last-second field goal for the second week in a row.

“I still think the Jets are probably the best team in New York,” Scucci said. “The Giants are just awful.”

Cleveland, which was crushed 31-7 by the Bengals on Sunday, remains arguably the worst team in the NFL. Miami also is in the mix after losing 20-0 to the Saints early Sunday morning in London.

How could we? We had the Dolphins.