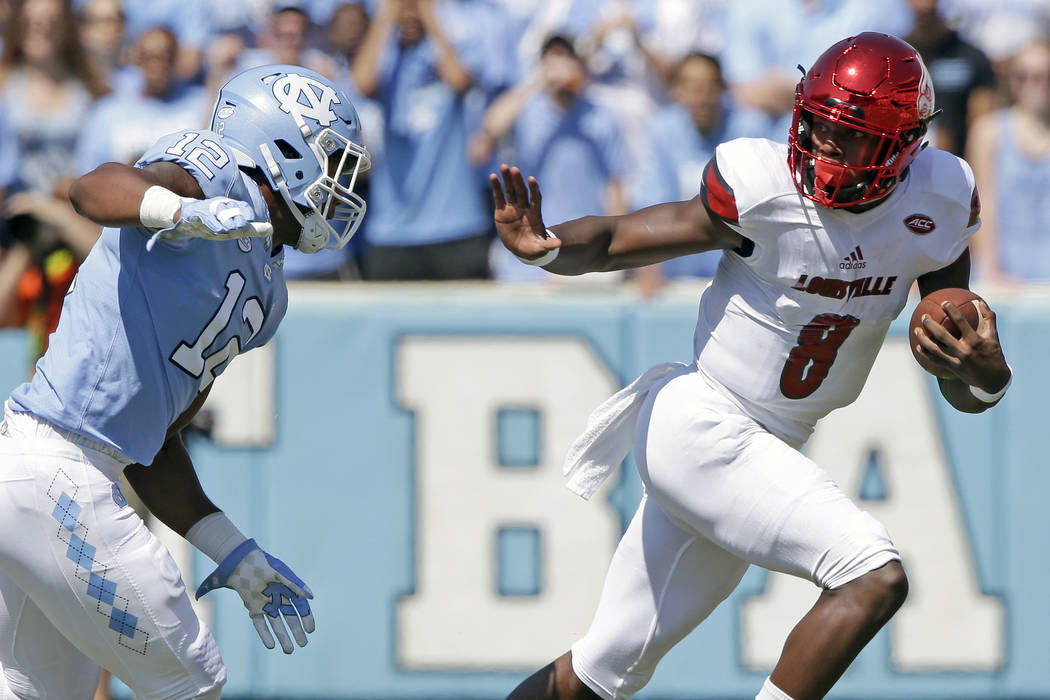 FILE - In this Sept. 9, 2017, file photo, Louisville quarterback Lamar Jackson (8) runs the ball as North Carolina's Tomon Fox (12) chases him during the first half of an NCAA college football game, in Chapel Hill, N.C. Jackson, the Heisman Trophy winner and All-American, leads the nation in total offense at 505 yards per game heading into a showdown with No. 3 Clemson. (AP Photo/Gerry Broome, File) 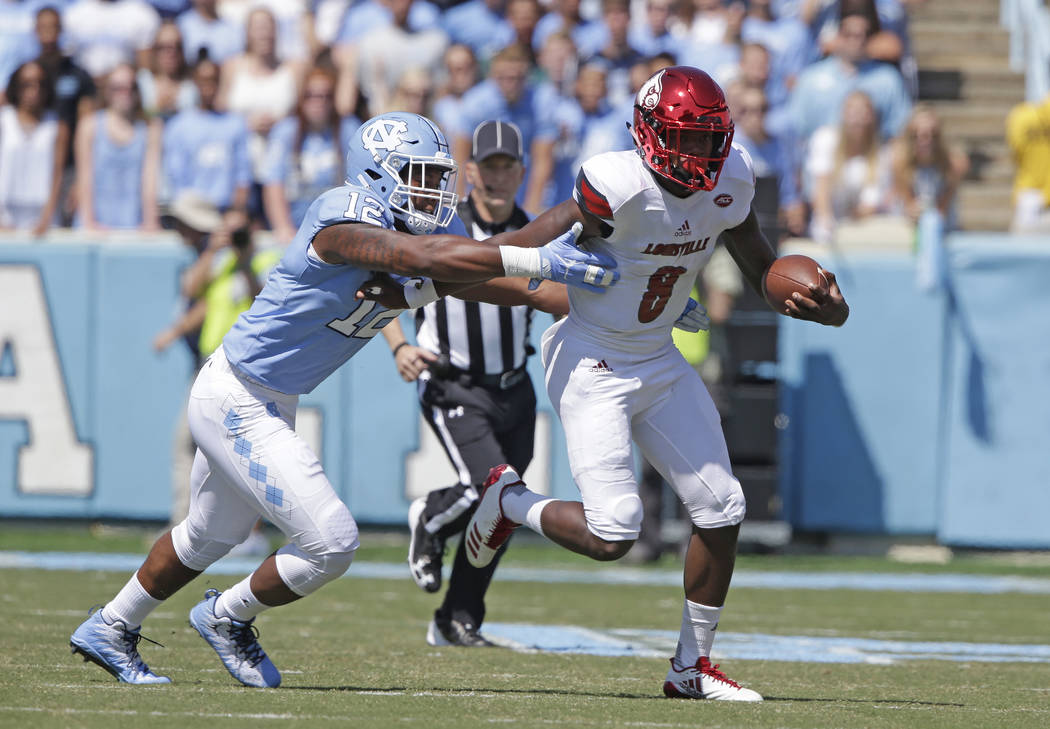 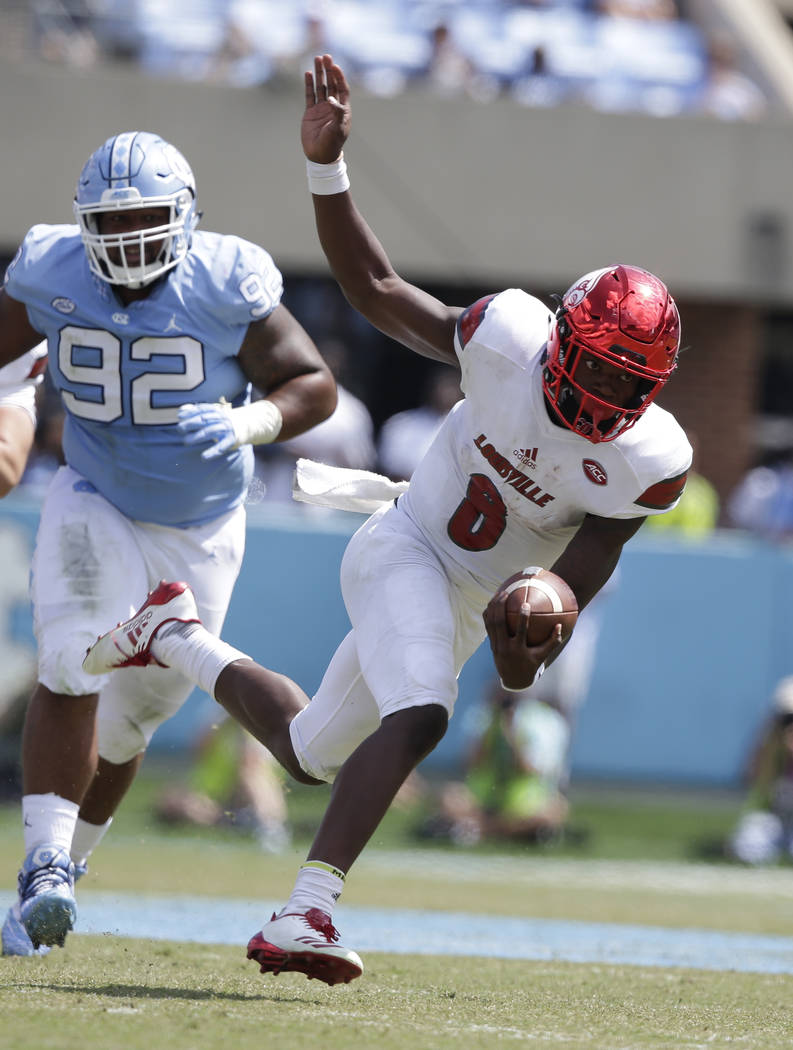 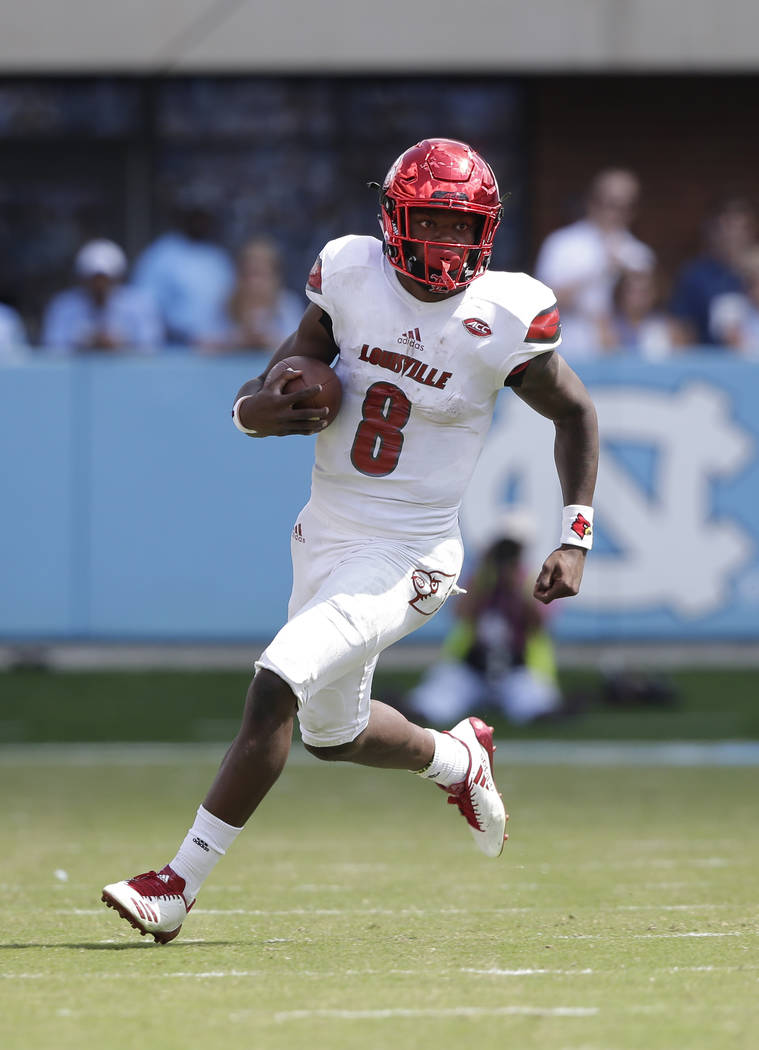 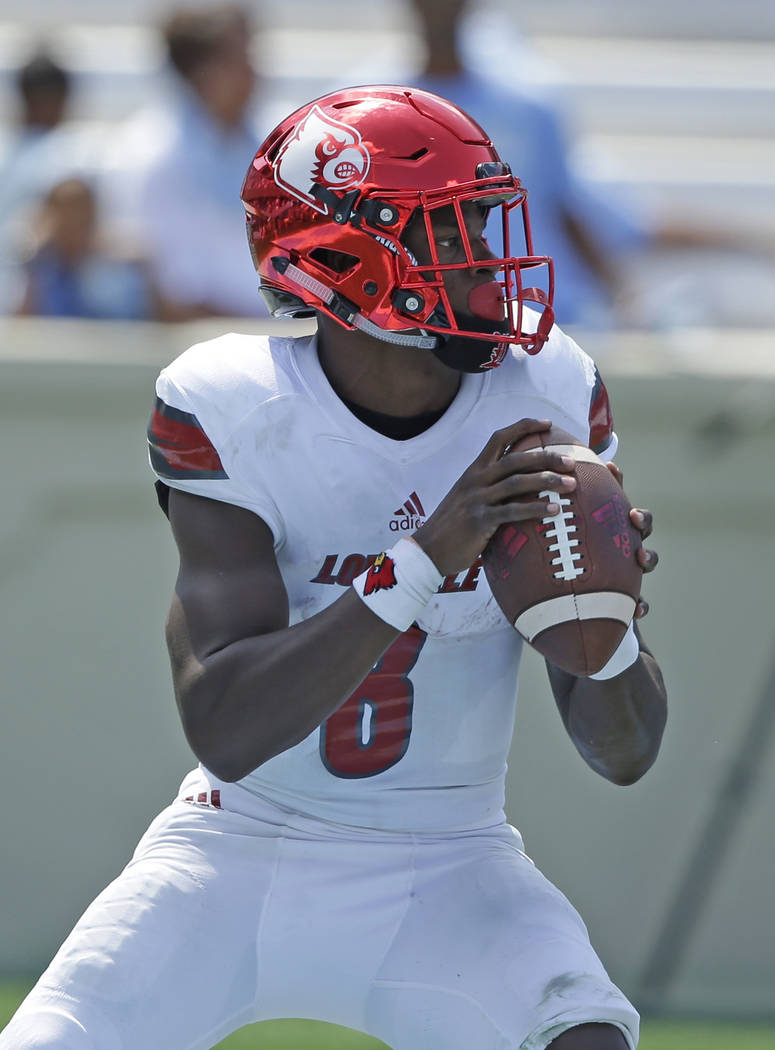 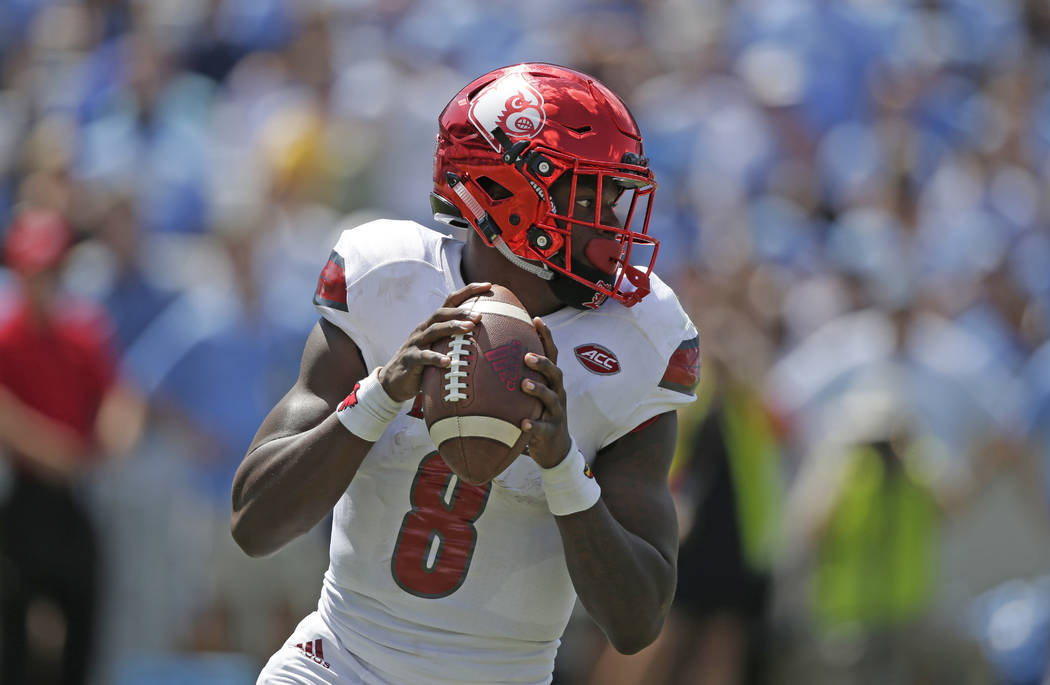 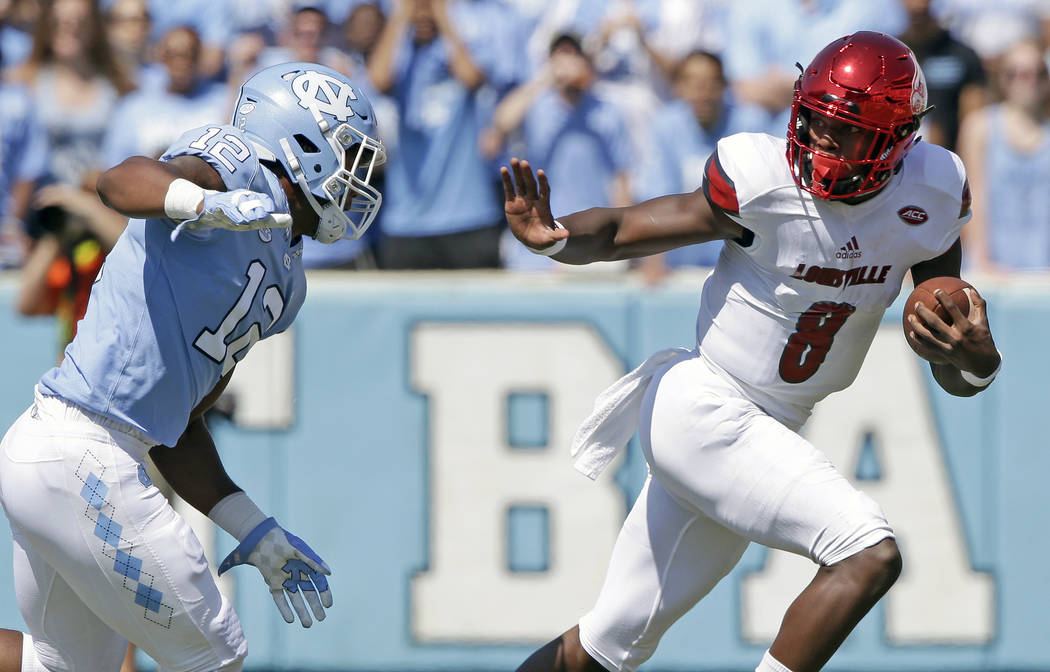 FILE - In this Sept. 9, 2017, file photo, Louisville quarterback Lamar Jackson (8) runs the ball as North Carolina's Tomon Fox (12) chases him during the first half of an NCAA college football game, in Chapel Hill, N.C. Jackson, the Heisman Trophy winner and All-American, leads the nation in total offense at 505 yards per game heading into a showdown with No. 3 Clemson. (AP Photo/Gerry Broome, File)

It’s been 42 years since former Ohio State running back Archie Griffin became the only two-time winner of the Heisman Trophy.

Louisville quarterback Lamar Jackson can take a huge step toward becoming the second two-time Heisman winner with a winning performance in Saturday’s showdown against No. 3 Clemson and its stifling defense.

Jackson has been sensational this season, compiling 1,010 total yards and eight touchdowns while leading the No. 14 Cardinals to road wins against Purdue and North Carolina — where he became the second player in FBS history to have at least 300 yards passing and 100 yards rushing in consecutive games.

After Jackson’s 525-yard, six-TD performance Saturday, oddsmakers made him the 9-4 favorite to win the Heisman, moving him past Southern California quarterback Sam Darnold (5-1) and Oklahoma quarterback Baker Mayfield (11-2).

“This may be a make-or-break game for him to defend the Heisman and for Louisville to compare itself to the defending national champion,” Sunset Station sports book director Chuck Esposito said. “I really like what Jackson has done this year. He’s really taken his game to the next level. There’s nobody in college football that compares to him right now. This could be a defining moment for him.”

The past three meetings between Louisville and Clemson have been decided by six points or fewer and won by the Tigers, who held off the Cardinals 42-36 last season in Death Valley.

“Clemson is getting a lot of respect on the line,” Westgate sports book manager Ed Salmons said. “I disagree with the line just because if you look at last year’s game, Clemson won the game because of its offense, not defense. And its offense isn’t anywhere near as good as last year.

“Louisville’s defense can control Clemson’s offense and, as long as they don’t turn the ball over, they can win.”

No. 4 Southern California, which closed as a 4-point favorite over Stanford in Saturday’s 42-24 win at the Los Angeles Coliseum, is giving 16 points to the Longhorns after the line opened at 17. Salmons said that number is way too high.

“I don’t see all that much of a difference between Texas and Stanford. From 4 to 17 seems like an overreaction to me,” he said. “I like USC to be in the playoffs, but this line is crazy. Eleven and a half or 12 is enough. Seventeen, to me, is insane.”

The Longhorns suffered a stunning 51-41 loss to Maryland in their opener under new coach Tom Herman before whipping San Jose State 56-0.

“I like Herman as a coach, and this is Texas’ first real spotlight test here,” Salmons said. “He’ll have them score enough points to at least cover the spread.”

Golovkin has edge over Alvarez

Hunter said to dismiss the fact that Golovkin’s 23-fight knockout streak ended in March when he beat Daniel Jacobs by unanimous decision.

“So Golovkin wasn’t 100 percent against Jacobs. Big deal. That’s doesn’t mean the wheels are coming off in this fight,” Hunter said. “Golovkin, like (Manny) Pacquiao, is a difficult boxer for which to prepare. They give you angles. You don’t have to look for Alvarez. Alvarez was taken to school against (Floyd) Mayweather; this fight he continues his education.”

Said Holt: “It’s a really good fight. Golovkin’s the bigger, stronger guy. Some people think he’s slowing down a little bit at 35, and Canelo’s never been better and is in his prime at 27. It will be a close fight, but I just have the feeling that Triple G’s size and power will be a little too much. If they fought two years from now, Canelo would win. But this fight, on Saturday, Triple G gets him.”