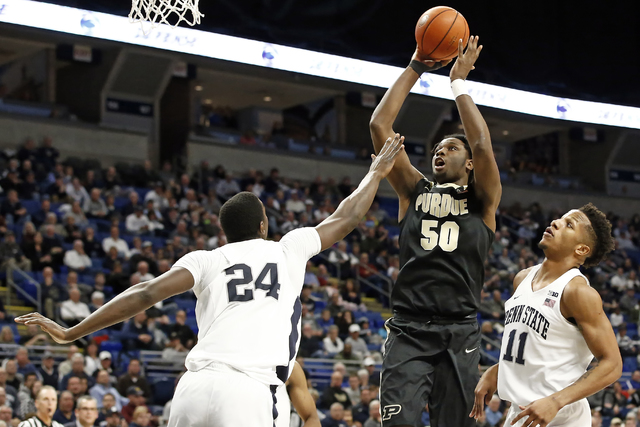 Former Vegas Insider handicapper Lance Blankenship, no relation to the ballplayer, hit for a much higher percentage of winners than his namesake while finishing second to two-time Westgate SuperContest winner Steve Fezzik in the 2009 Leroy’s Money Talks Invitational.

Taking a break from his roofing business in Washington, Pennsylvania, Blankenship (Theblankenshipedge.com) has been busy in Las Vegas the past 10 days pounding Purdue on futures bets to win the NCAA Tournament.

Blankenship, who showed me his stash of 20 tickets Thursday after removing them from a safe deposit box, plans to place additional wagers that would increase his potential earnings to $500,000.

Blankenship, who bets only on college basketball and college football, said he wagers an average of $3,300 on more than 300 games per year. Purdue (23-5, 12-3 Big 10) — ranked 14th by The Associated Press and 11th by Kenpom.com — has made a believer out of Blankenship with its size, 3-point shooting, defense and chemistry.

“I decided early in the year that they had a chance. I hedged a little bit because there was another month in the season to go, but the longer I saw Purdue play, the more I needed to do this,” he said. “I just think they’re going to win. I really do. They care about each other, they play like a team, they’re unselfish.”

“Purdue is enormous. When they played Villanova at the beginning of the season, Villanova looked like a high school team compared to them,” he said. “They’ve got two guys on the wing who both play good defense and shoot 3-pointers well, and they have two unshakable ball-handlers.

“They’re going to be hard to beat. And UCLA, North Carolina, Duke — all the chalk this year is going to be disappointing.”

Blankenship also is betting on Purdue to cover as a projected 1½-point favorite at Michigan on Saturday and to win the Big Ten Conference tournament as well.

Purdue was listed Thursday at 25-1 odds to win the national championship at the South Point and Westgate, where North Carolina is the 6-1 favorite, followed by Gonzaga at 7-1, Kansas and Kentucky at 15-2, and Duke, UCLA and Villanova at 8-1.

“We don’t have those one or two teams that have really separated themselves from the rest of the pack,” Westgate sports book director Jay Kornegay said. “You can put the top eight teams in the same boat.”

“The ‘no’s’ are rather steep prices, but we’ve had some good action,” Andrews said. “The money against UCLA we were looking for. We were kind of vulnerable on them.”

Gonzaga is the plus-550 favorite to win the title at South Point, where bettors have to lay 8-1 that the Bulldogs won’t win it. Andrews said nobody has bet against them.

“We’d love to get a bet against Gonzaga,” he said. “You hear all these guys tell you how they’re really overrated and really not that good.”

Along with Purdue, other sleepers with odds of at least 25-1 to win the title are West Virginia and Wisconsin at 25-1, and Virginia and Baylor at 40-1. No. 22 Butler, which finished a season sweep of No. 2 Villanova on Wednesday, is 80-1.