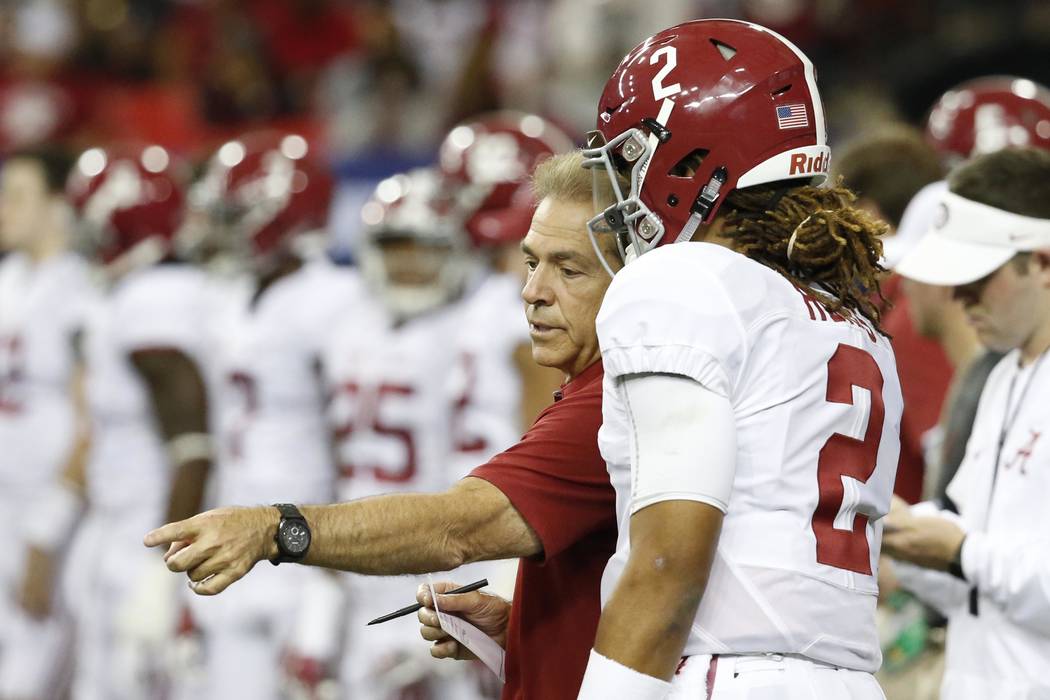 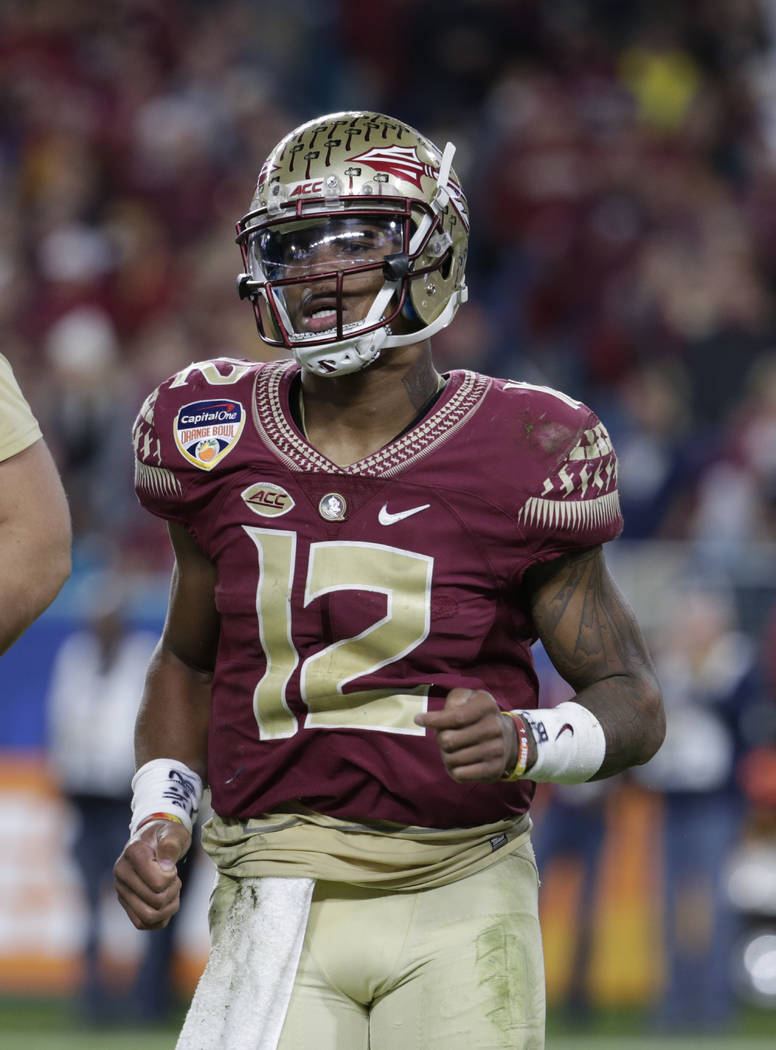 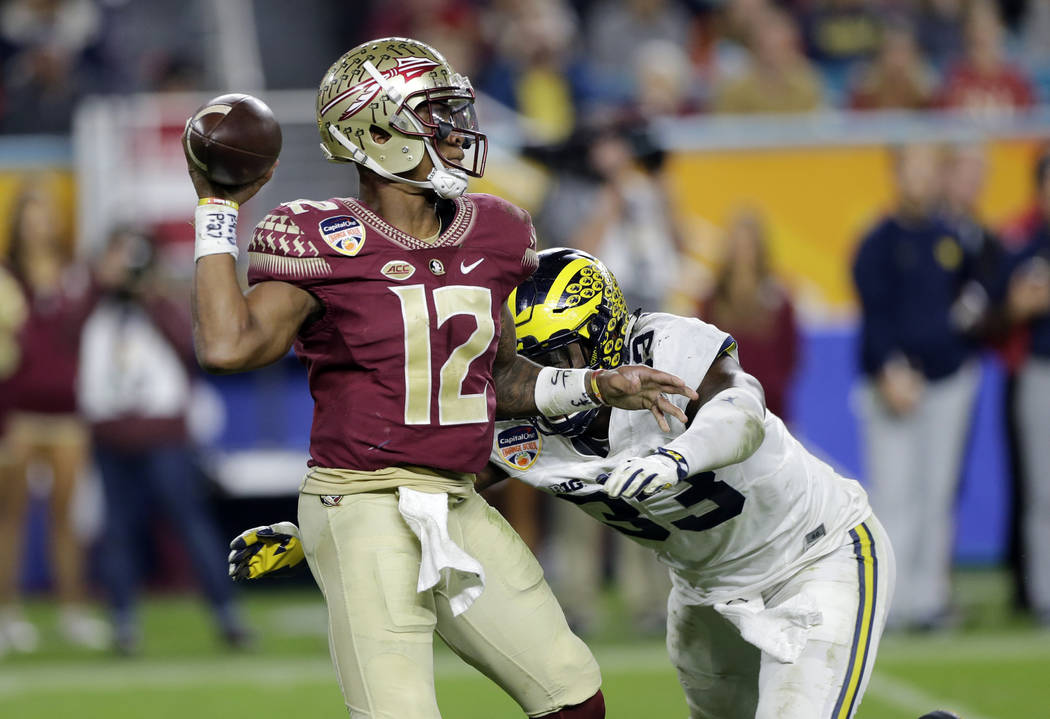 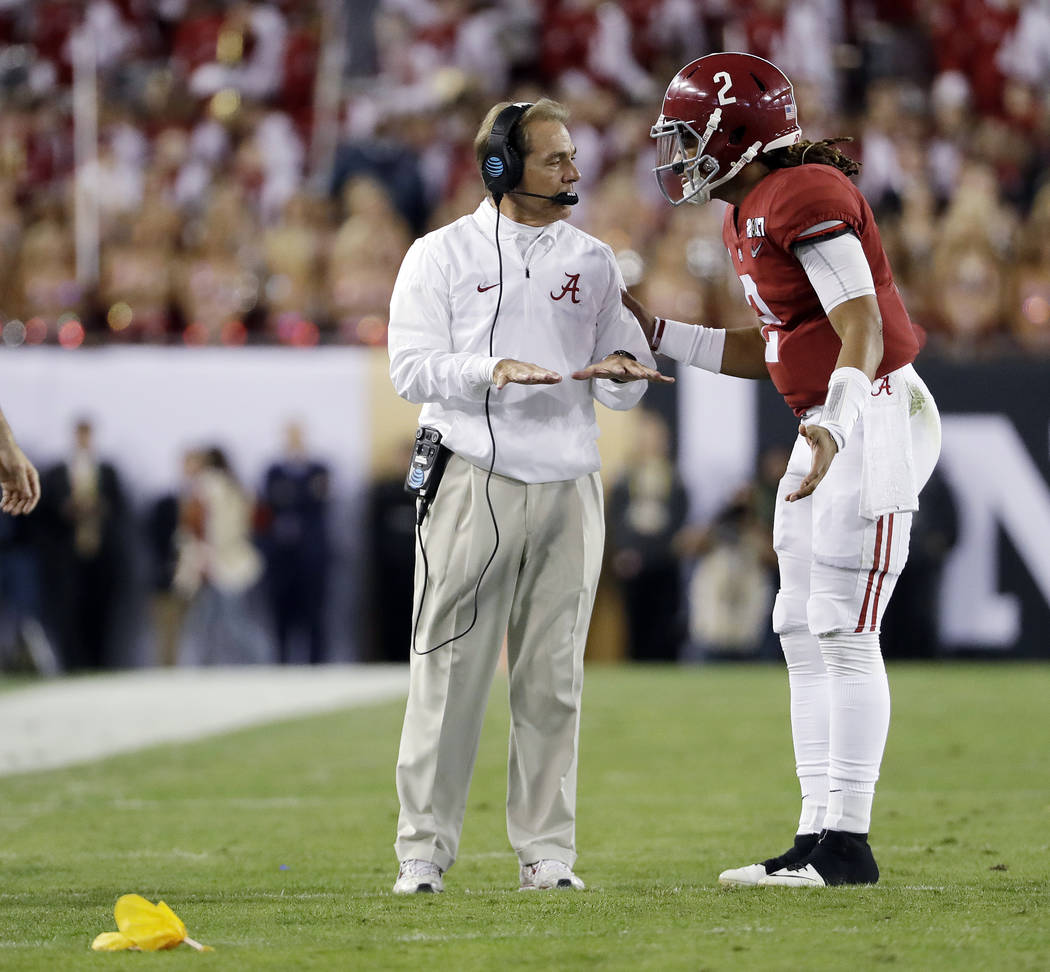 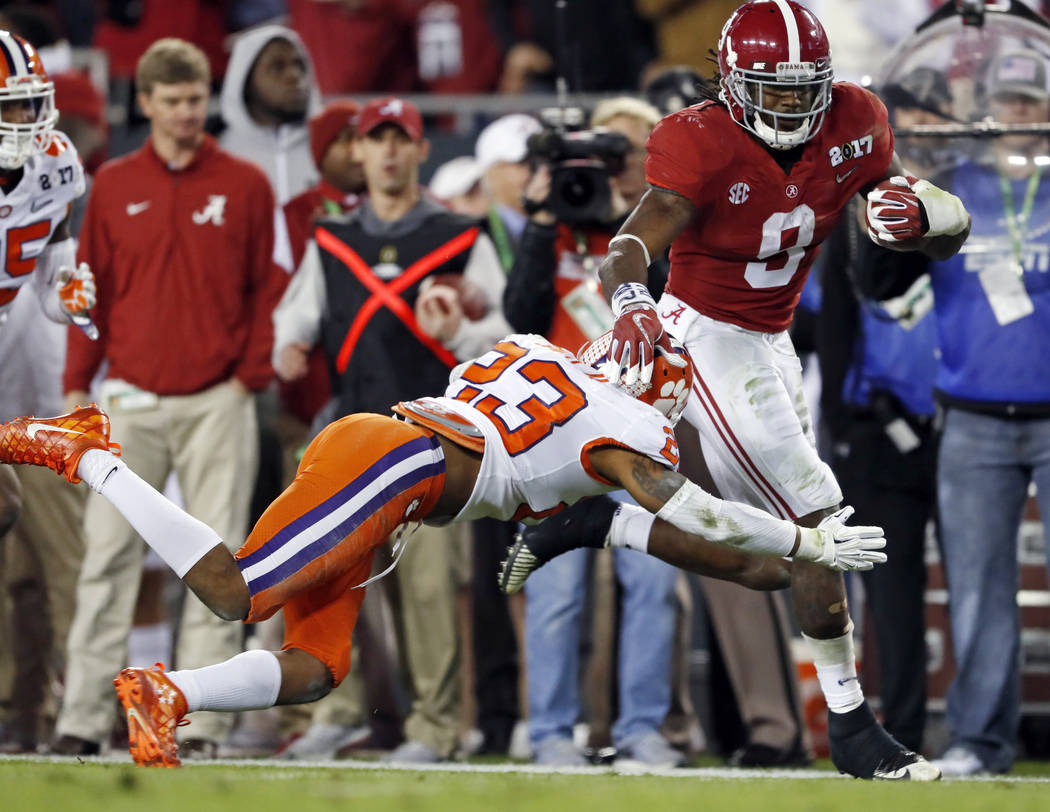 Alabama's Bo Scarbrough runs for a touchdown during the first half of the NCAA college football playoff championship game against Clemson Monday, Jan. 9, 2017, in Tampa, Fla. (AP Photo/John Bazemore) 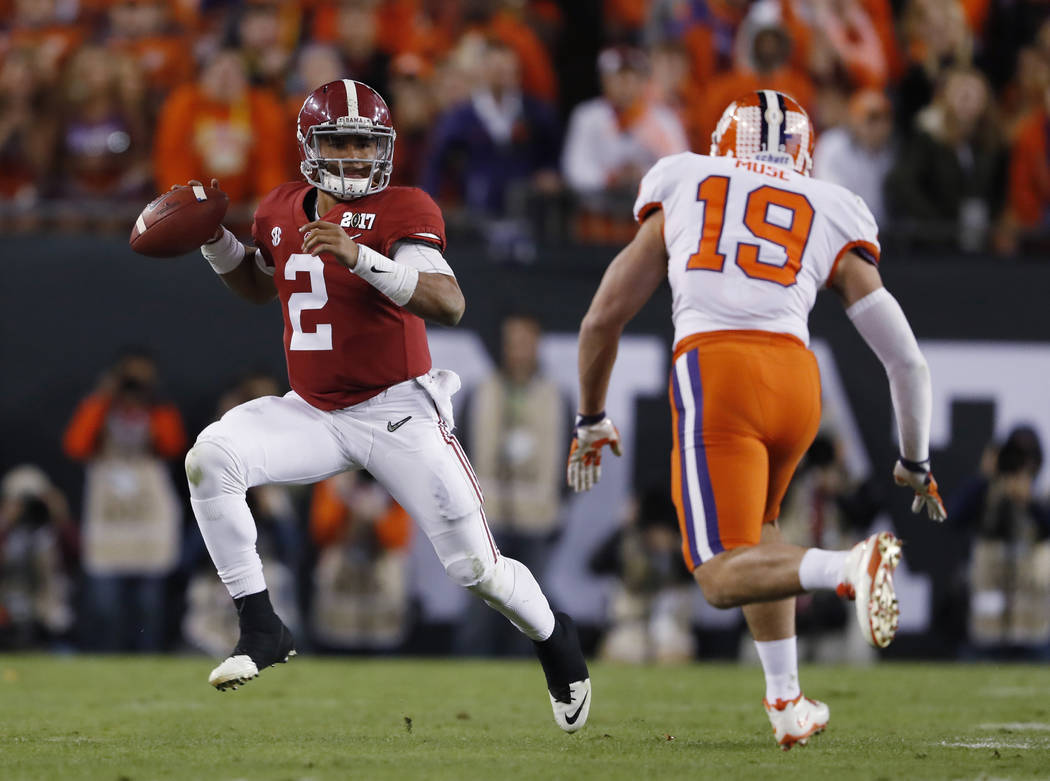 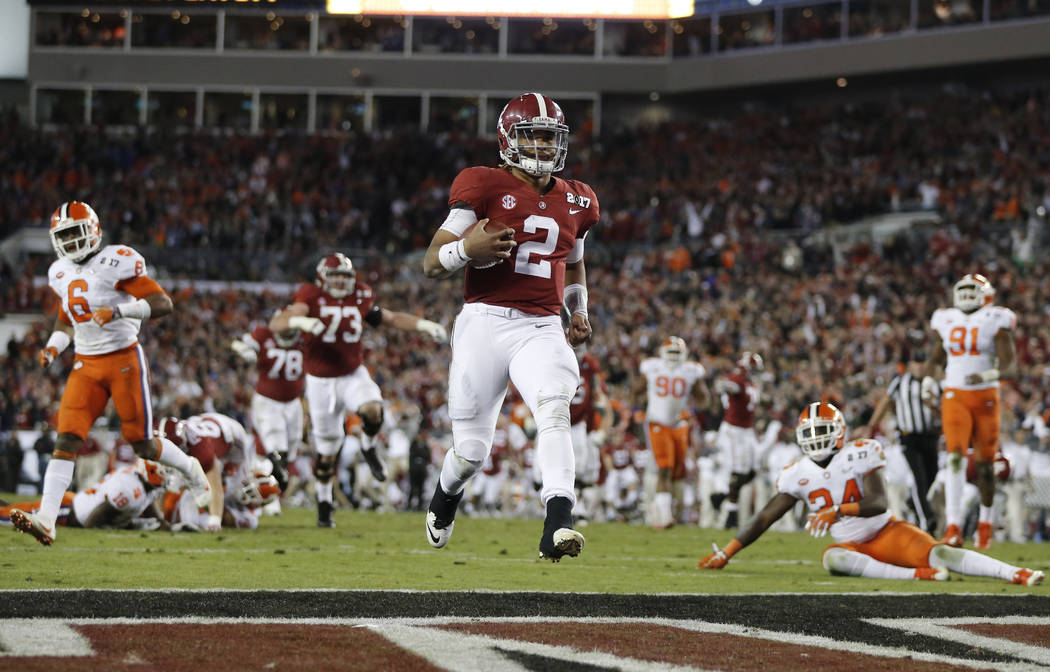 Alabama's Jalen Hurts runs for a touchdown during the second half of the NCAA college football playoff championship game against Clemson Tuesday, Jan. 10, 2017, in Tampa, Fla. (AP Photo/John Bazemore) 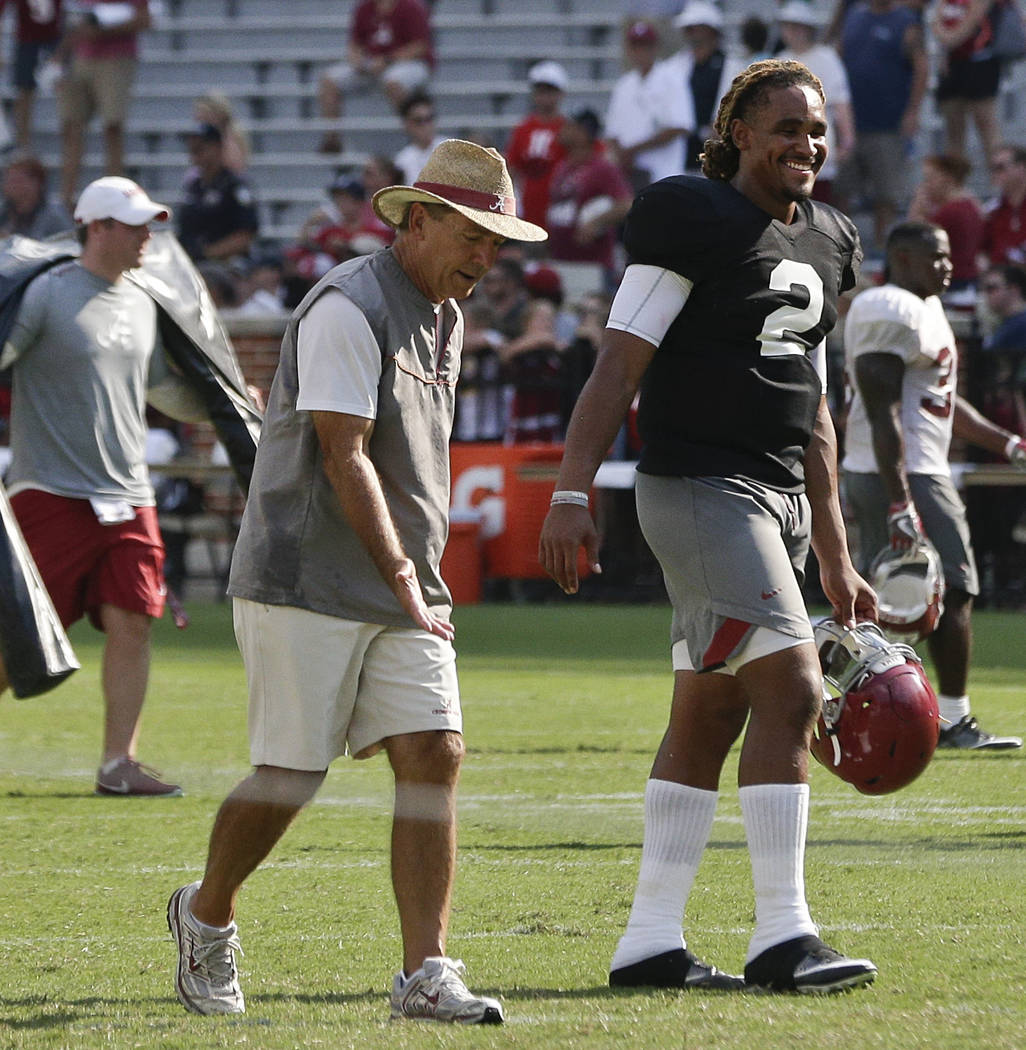 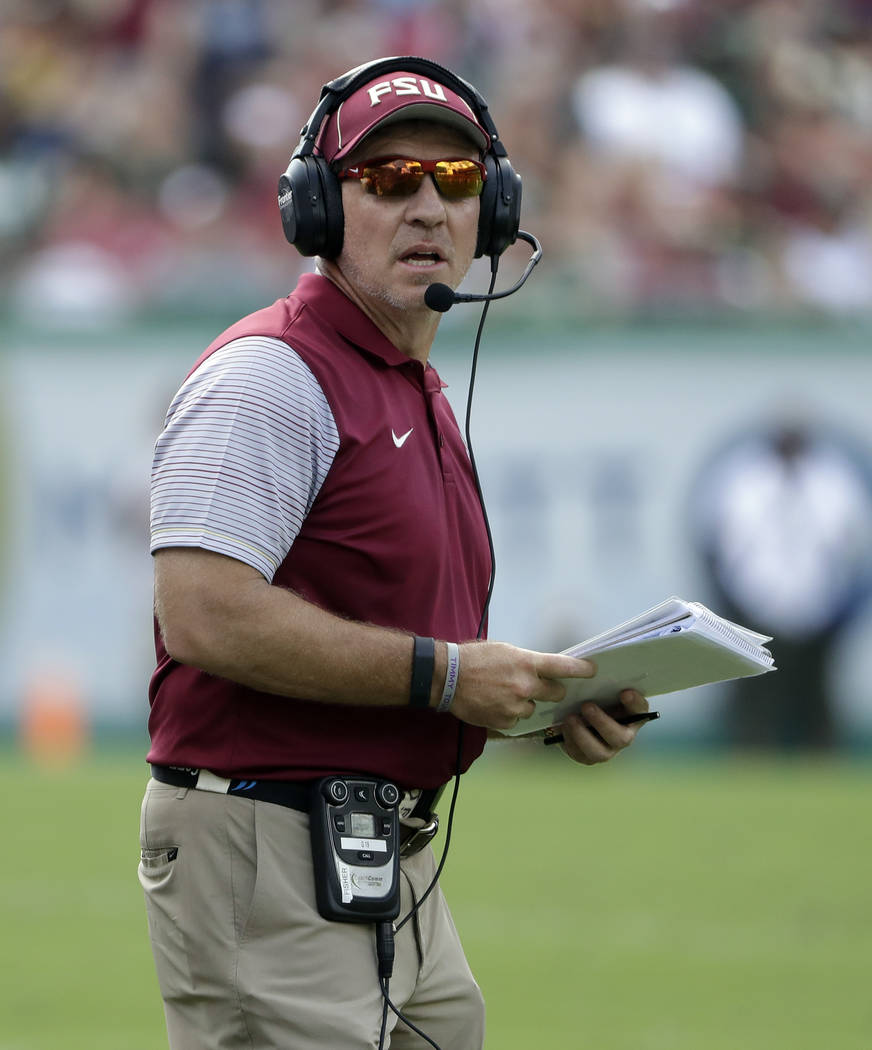 FILE - In this Sept. 24, 2016 file photo, Florida State head coach Jimbo Fisher looks on during an NCAA college football against South Florida in Tampa, Fla. Florida State, which returns 17 starters from a team that finished 10-3 last year, will find out immediately if it will contend for a College Football Playoff spot. The Seminoles open against Alabama in Atlanta on Sept. 2. (AP Photo/Chris O'Meara, File) 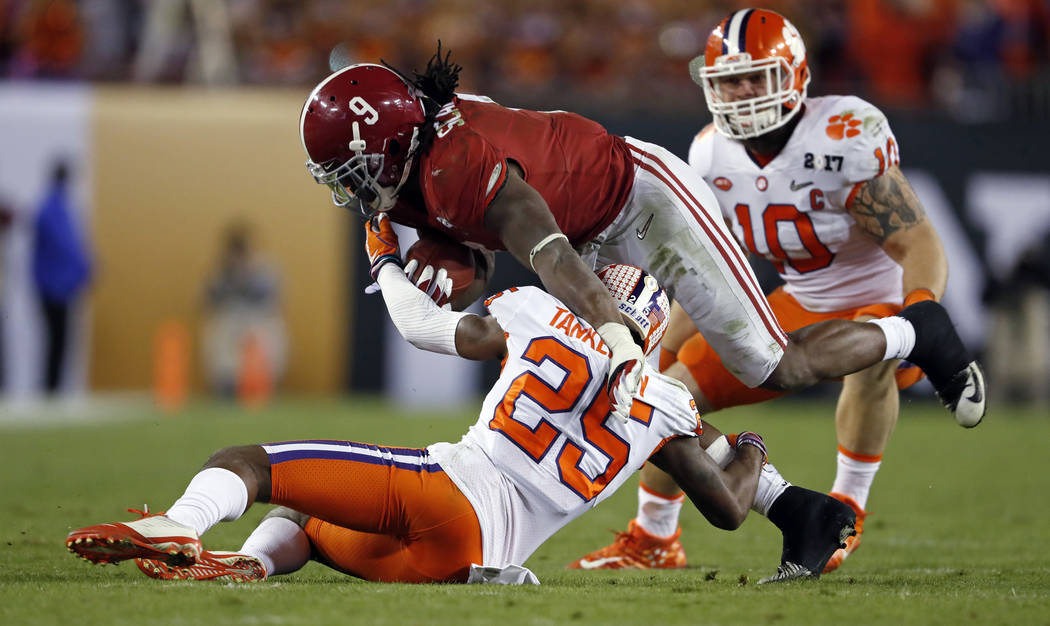 Less than eight months after Alabama lost to Clemson in the college football championship as a touchdown favorite, the top-ranked Crimson Tide will open their 2017 season as 7-point favorites over No. 3 Florida State on Saturday in arguably the biggest season opener ever.

In a scenario similar to January’s title game, the betting public is again backing the underdog and the sharps are mostly siding with Nick Saban’s squad, which has reloaded again after losing four first-round NFL draft picks from last season’s team.

“The public is fairly heavy on Florida State, but the sharp money’s on Alabama. The line dropped to 6½, but now it’s back to 7,” said Matthew Holt, vice president of CG Technology sports books. “These two teams are really close. It’s hard to lay 7 in a game that’s so tight.”

Saban is 8-1 against the spread in his past nine openers but 6-10 ATS in his past 16 as a single-digit favorite. Seminoles coach Jimbo Fisher is 6-1 ATS in his past seven openers and has perhaps his best defense since his 2013 national title team, which allowed 12.1 points per game.

Alabama is the 3-1 favorite to win its fifth national championship in nine years, and the Seminoles are the 9-1 fourth choice. The teams have three of the top 10 Heisman Trophy favorites in Tide quarterback Jalen Hurts (6-1) and running back Bo Scarbrough (10-1) and Florida State QB Deondre Francois (15-1).

The game is being played at a neutral site at Atlanta’s Mercedes-Benz Stadium, which also will be the site of the championship game Jan. 8.

Alabama is 10-0 in season openers under Saban, winning seven nonconference games at neutral sites against Power Five teams by an average of 23 points. But professional sports bettor Frank Carulli is banking on the Noles to keep this one close behind their loaded defense, which returns nine starters.

“The points are way too good to pass up there,” Carulli said. “Florida State’s got the edge at quarterback, and their defense will keep them in the game. They can certainly win the game, and they’re getting points. I don’t see Alabama going up and down the field on them.”

The winner will have a huge edge in the national title race.

“If Florida State wins, they’re like Alabama. They’re the only team in the nation that can lose a game and still get in,” Carulli said. “If they lose, they’re up against it big time.”

Holt said Wisconsin (42-1) and Washington (20-1) have been the most popular sleeper picks to win the title.

The Badgers, who opened at 80-1, don’t play Ohio State or Penn State in the regular season and should have an easy path to the Big Ten title game.

“An upset there and they’re in the playoffs,” Holt said.

Likewise, the Huskies, who were in last season’s College Football Playoff and return quarterback Jake Browning — 8-1 to win the Heisman — appear poised to meet Southern California in the Pac-12 title game.

“I wouldn’t be surprised if the winner of that is in the final four,” Gold Sheet handicapper Bruce Marshall said. “Washington has a soft nonconference schedule, so they should get in there.”

“Kansas State is a very interesting dark horse to make some noise,” he said. “It might be (coach) Bill Snyder’s last hurrah, their quarterback (Jesse Ertz) is a good playmaker, their defense is rugged and their schedule is not too bad.”

Holt said betting on the Heisman has been heavier than usual this year because of a wide-open field led by USC quarterback Sam Darnold (5-2) and Louisville quarterback Lamar Jackson, last year’s winner.

“A lot of years there are only three or four guys you think can win,” he said. “But this year we don’t have any overwhelming favorites.”

CG Technology’s largest liability is on Auburn quarterback Jarrett Stidham, who is at 8-1 after opening at 50-1. Stidham was sensational at Baylor in 2015 as a true freshman but sat out last season after transferring.

Holt and Marshall said Oklahoma State quarterback Mason Rudolph (16-1) might be in the mix, and Marshall likes Buckeyes running back Mike Weber (50-1) and Stanford running back Bryce Love (85-1) as his long shots.

“Love could have numbers like Christian McCaffrey had,” Marshall said. “The Heisman thing can go sideways very quickly. Nobody was talking about Lamar Jackson last year, and by the end of September he was the favorite.”

Happy football season! We’ll try to pick some winners and hope you cash plenty of tickets.