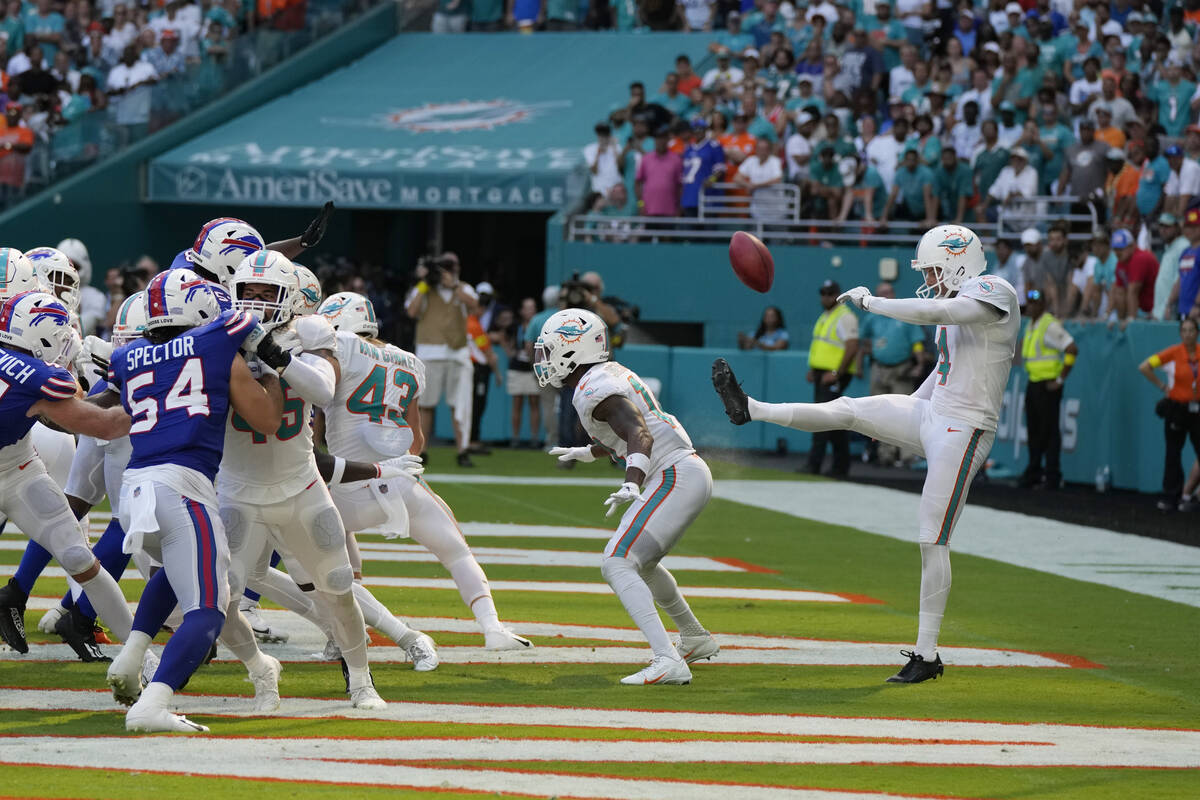 Miami Dolphins punter Thomas Morstead (4) sees the ball go backwards after attempting a punt during the second half of an NFL football game against the Buffalo Bills, Sunday, Sept. 25, 2022, in Miami Gardens, Fla. The play resulted in a safety for the Buffalo Bills. (AP Photo/Rebecca Blackwell)

After Morstead booted a punt into the backside of blocker Trent Sherfield that bounded out of the end zone for a safety, Sanchez joked about the play on Twitter.

“Woah … stay out of my lane bro @thomasmorstead,” the former Jets quarterback posted above a replay of the punt that cut Miami’s lead to 21-19 with 1:33 left and gave Buffalo the ball back with a chance to win.

The Bills drove to the Miami 41 in the final seconds to set up a potential winning field goal try. But time ran out before they could stop the clock, killing all teasers and money-line parlays on Buffalo while ensuring that Sanchez will remain the main butt of butt jokes.

The Dolphins, who closed as 4½-point underdogs, were one of eight underdogs that won outright Sunday and among nine that covered (9-4-1 ATS) as they joined the Eagles as the NFL’s only 3-0 teams.

The betting public suffered its largest losses on the previously unbeaten Bills (2-1) and Chiefs (2-1), who closed as 4½-point favorites over the previously winless Colts (1-1-1) in a 20-17 defeat.

“Those two games really saved the day for us,” Westgate SuperBook vice president Jay Kornegay said. “That’s what going to stick out when people see the scores, that the Bills and the Chiefs lost.”

“It was a public versus the sharps game. The sharps were on the Colts,” Caesars assistant director of trading Adam Pullen said. “It looked too easy. The Chiefs were going to roll over the Colts.

“But I’ve seen it too many times before where the team that looks worse the previous week bounces back the next week.”

Raiders of the lost

Local bettors also took a hit on the Raiders, the league’s only 0-3 team after losing 24-22 to the Titans and falling to 0-3 against the spread after failing to cover as 2-point road favorites.

The Raiders trailed throughout and pulled within two on Derek Carr’s touchdown pass to Mack Hollins with 1:14 left, but Carr’s 2-point conversion pass fell incomplete.

One bright spot for Raiders bettors is that the late score pushed the game over the total of 45½.

“Offensively, they seem to look out of sync, and defensively, they can’t really stop anybody. They’re in some serious trouble,” Red Rock Resort sportsbook director Chuck Esposito said. “The Raiders are a big surprise being 0-3. We clearly expected this Raiders team to be so much better.”

Only one team this century has made the playoffs after starting 0-3 (2018 Texans). Caesars vice president of trading Craig Mucklow made the Raiders +450 underdogs to reach the postseason.

“They would be 7-1 or 8-1 if everyone around them had won,” he said. “But the Chargers lost and the Chiefs lost, and they’re still alive in the division.”

The Chargers soared from as low as -3 to -6½ over Jacksonville when news broke that quarterback Justin Herbert would play. But the surprising Jaguars (2-1) dominated Los Angeles (1-2) in a 38-10 rout that snapped an 18-game road losing streak.

“Everybody is saying the AFC West is overrated now,” Kornegay said.

The books had their third straight winning NFL Sunday to start the season. But the betting public dealt them defeats on a few games, as the Ravens (-2½) whipped the Patriots 37-26, the Bengals (-6½) blew out the Jets 27-12 for their first win and the Eagles (-6) crushed the Commanders 24-8.

“I don’t see the Eagles being threatened by anybody in the NFC East,” Kornegay said. “The Dolphins have the Bills right there. They’re going to have a tougher chore winning that division versus what the Eagles have to do.”

“I feel like 80 percent of the league is going to finish with seven, eight or nine wins,” Kornegay said. “There is so much parity in this league. It’s going to be very difficult to predict what’s going to happen on a week-to-week basis.”