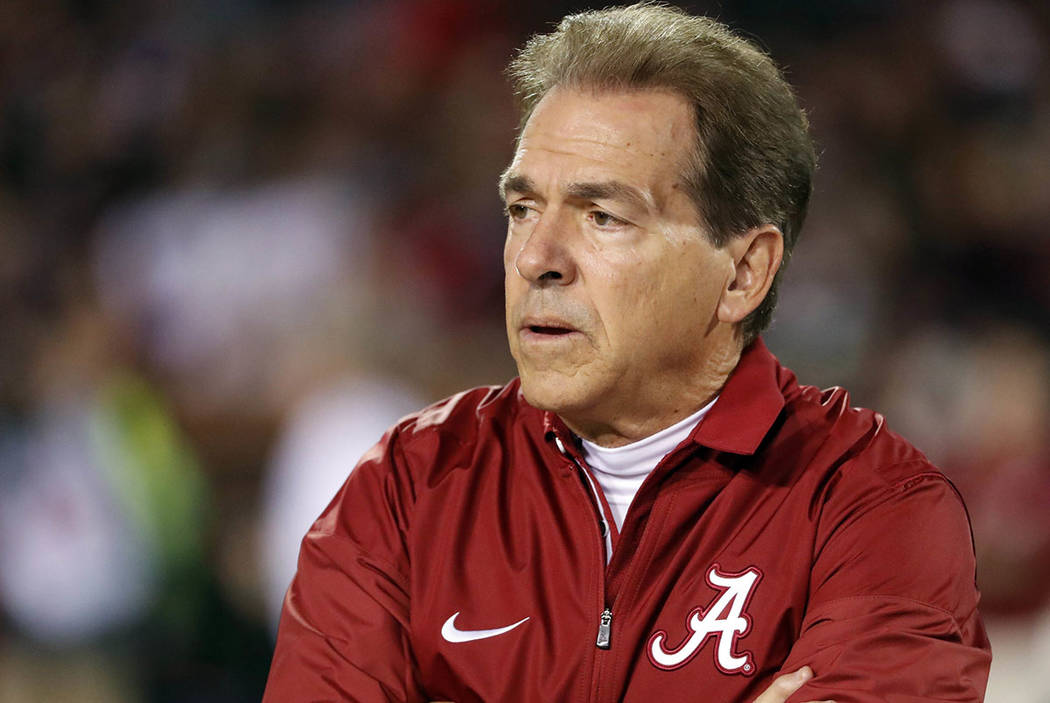 We’re certainly not going to complain about watching a College Football Playoff rubber match between Clemson and Alabama on New Year’s Day.

But at least two Las Vegas oddsmakers are surprised the Crimson Tide (11-1) were chosen over Ohio State (11-2) for the fourth and final CFP seed.

Alabama didn’t play in its Southeastern Conference championship. The Buckeyes won the Big Ten title with a 27-21 win over previously unbeaten Wisconsin but also were blown out by Iowa 55-24 this season.

“I thought Ohio State was going to get in,” Wynn Las Vegas sports book director Johnny Avello said. “They got in last year by not winning their conference. This year, they didn’t get in and they won their conference. I don’t know how they think (on the CFP selection committee). I really don’t.

“You can make an argument for Alabama. Alabama’s going to be favored over anybody.”

The Tigers are the defending national champion and No. 1 team in the country, but they are a slight underdog to Alabama in the Sugar Bowl.

“I thought, for sure, they would pick Ohio State,” Westgate sports book manager Ed Salmons said. “You wonder if they kind of said, ‘Alabama-Clemson has been a really good game and Clemson-Ohio State hasn’t been a good game.’

“I don’t know how much influence TV has, but they’ll take Alabama-Clemson all day.”

Salmons expects the betting public to back Clemson, which whipped Miami 38-3 in the Atlantic Coast Conference title game.

In the other Jan. 1 semifinal, No. 2 Oklahoma is a 1½-point favorite over No. 3 Georgia in the Rose Bowl after it opened as a 3-point favorite.

The Sooners, led by Heisman Trophy favorite Baker Mayfield, won the Big 12 title with a convincing 41-17 win over Texas Christian. The Bulldogs, tied for second in the nation in scoring defense (13.2 ppg), avenged their only loss in a 28-7 win over Auburn in the SEC championship.

“Baker Mayfield’s going to have to play a real good game. Georgia’s a live underdog,” Sunset Station sports book director Chuck Esposito said. “And for Clemson to be an underdog … it wouldn’t surprise me to see either team go off as favorites or win the game.”

Wynn Las Vegas posted opening lines Sunday on eight other bowl games. The biggest move was in the Citrus Bowl, where Louisiana State opened as a 1-point underdog to Notre Dame but was quickly bet to a 2-point favorite.

Other New Year’s Day lines: Michigan by 7 over South Carolina in the Outback Bowl and Auburn by 9½ over Central Florida in the Peach Bowl.

Lines on five other bowl games: Ohio State by 6½ over Southern California in the Cotton Bowl; Louisville by 5 over Mississippi State in the Taxslayer Bowl; Memphis by 3 over Iowa State in the Liberty Bowl; Penn State by 3 over Washington in the Fiesta Bowl; and Wisconsin by 6½ over Miami in the Orange Bowl.

Books break even on NFL

The Vikings (10-2) covered their sixth straight and won their eighth straight in a 14-9 win at Atlanta as a 2-point underdog. Minnesota is tied with Philadelphia for the NFC’s best record in the quest for home-field advantage in the playoffs.

“As we’ve talked about, that big game in February happens to be played in Minneapolis,” Esposito said.

The Vikings were one of the biggest decisions for the betting public, which also won on the Patriots, Saints and Packers.

Green Bay, which closed as a 3-point home favorite over Tampa Bay, grinded out a 26-20 overtime win and cover despite only 84 yards passing from Brett Hundley.

A Wynn Las Vegas bettor won a six-figure wager on the Packers, who at 6-6 are keeping their slim playoff hopes alive with the Browns on deck and Aaron Rodgers eligible to return in Week 15.

“They’re still in the hunt,” Esposito said. “If they can get in there, you’ve got to give them a chance (to win the Super Bowl).”

If only the NFL had a selection committee, the Packers would be a lock to make the playoffs.