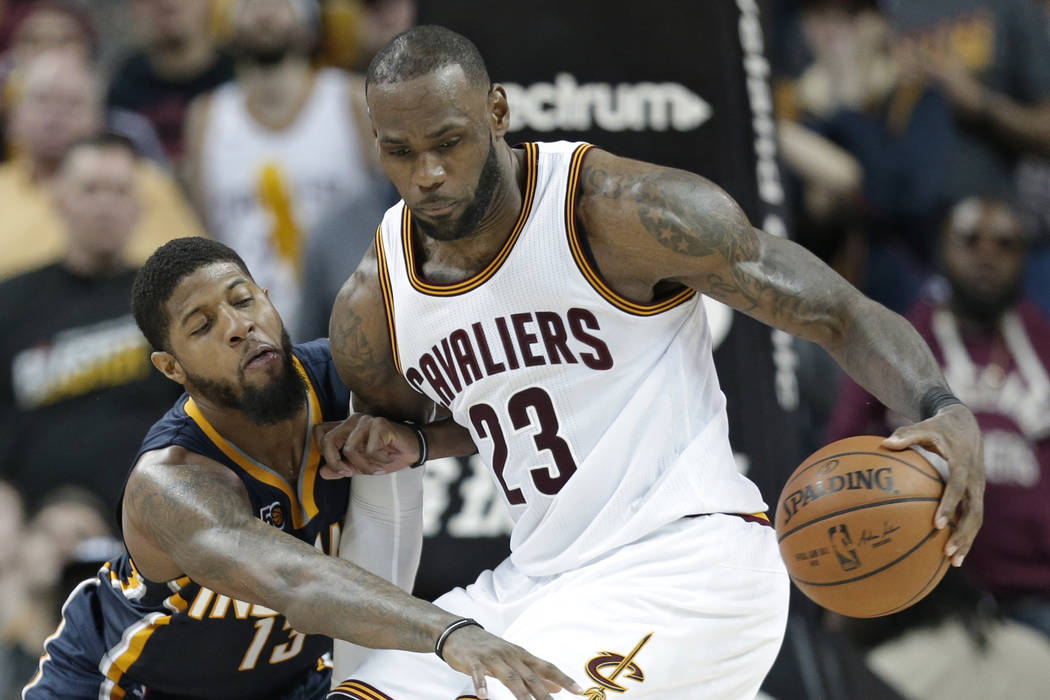 The Cavaliers are limping into the playoffs, having lost their past four games in a 10-14 season-ending slide. The defending NBA champions surrendered the top seed in the Eastern Conference to the Celtics. They’re vulnerable.

They’re also favored to return to the NBA Finals for a rematch with the Warriors.

“I’m concerned with the Cavaliers defense and overall inability to execute the way they want to, but there is no way I’m picking anyone but LeBron (James) in the Eastern Conference,” ESPN SportsCenter anchor Doug Kezirian said. “The gap has become closer, but there’s still a gap.”

Cleveland, the minus-225 favorite to win the East, will host the Indiana Pacers in the opening game of the playoffs at noon Saturday, and Kezirian is siding with the Cavs in the first half as 5-point favorites.

“To me, the biggest threat is Washington. I think (guards Bradley) Beal and (John) Wall can take over a game if the stars are aligned.”

The Westgate sports book has a prop pitting the Warriors (minus-200) versus the field (plus-175), and manager Jeff Sherman fully expects Golden State to cash as the heaviest favorite he can recall since the late 1990s Bulls title teams led by Michael Jordan.

“With a healthy (Kevin) Durant, I don’t see any team in the NBA beating them four times,” he said.

While the quest for the crown might be less a competition than a coronation, there’s always plenty of suspense in sweating out bets along the way.

The Rockets are favored by 7½ points in Sunday night’s game, and the total of 228 is the highest of the eight series openers. Handicapper Doug Fitz (Systemplays.com) leans to the Thunder in Game 1, and so do I.

Houston went 0-8-1 against the spread in its final nine regular-season games and, as favorites of 7 points or more, is 3-11 ATS in its past 14 with four outright losses. The Rockets also are 18-23 ATS at home this season, and Westbrook and Oklahoma City’s defense should keep the game close.

“That number’s too high. Oklahoma City can definitely hang with them in this game,” Fitz said. “During the regular season, teams like Houston can get away with outscoring everybody. But defense is the key come playoff time.”

Fitz also leans to the Trail Blazers getting 14½ points from the Warriors on Sunday. Portland covered its past two meetings with Golden State, losing 113-111 and 125-117.

I’m leaning to the Bulls as an 8-point ’dog to the Celtics on Sunday. Boston tends to play to the level of its competition and doesn’t blow out many teams, going 7-14 ATS with five outright losses as favorites of 7 points or more this season.

Kezirian gives Chicago “a puncher’s chance” to win the series at plus-400.

“The only problem is they’re purely overmatched at the coaching position,” he said. “I realize what everyone sees in (Boston guard) Isaiah Thomas on the offensive end, but this is not the 1990s. We have analytics now, and he is the worst defender, statistically, in the entire NBA.”

Fitz and Sherman also think the Jazz have a solid shot to cash as plus-200 ’dogs in their series against the Clippers.

“Utah’s live there,” Sherman said. “That’s going to be a battle. I think that one goes seven games.”

Said Fitz: “The Jazz is one team to really look out for. They’ll go farther than most people think they will, primarily because of their defense. I wouldn’t be surprised if the Jazz pull out the series.”