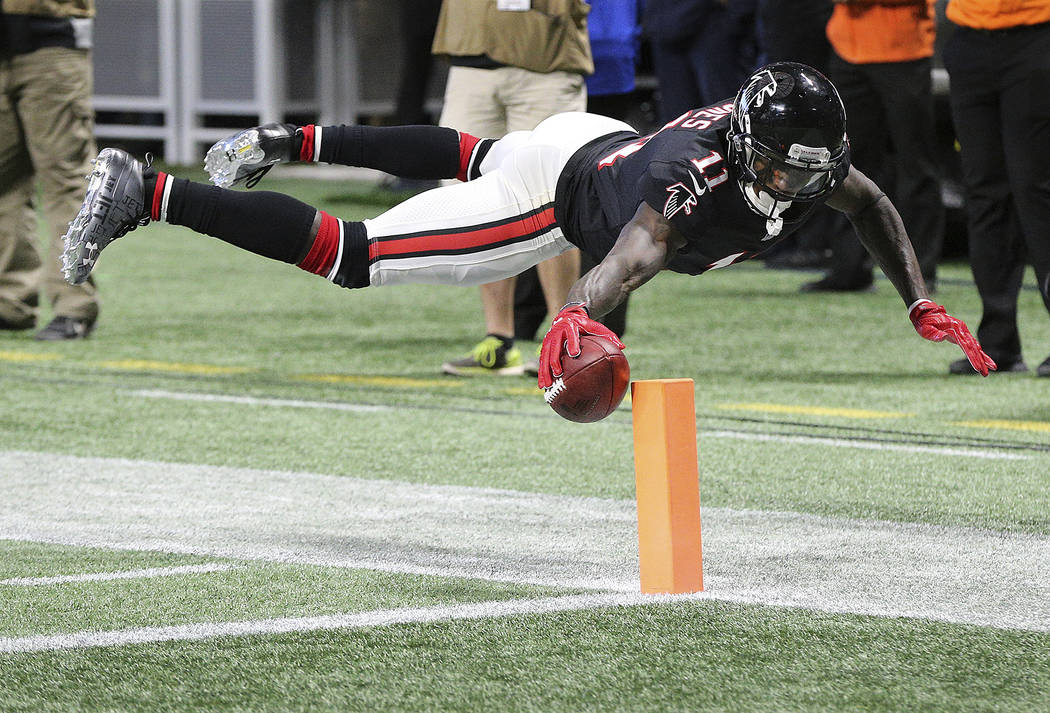 A day after a bettor at The Venetian hit a $100 nine-team parlay comprised of college football favorites for $37,000, the betting public cashed in on another NFL Sunday dominated by favorites.

The Eagles, Patriots and Falcons all covered double-digit spreads and the Panthers delivered a last-minute cover as favorites went 9-3 against the spread Sunday and Las Vegas sports books were thrown for a loss.

“It was a horrible day. (Saturday) was not good either because of all the favorites in college,” said CG Technology sports book director Jason Simbal, who paid off the nine-teamer. “We’re getting really beaten up with parlays on all the favorites.”

“It’s like a repeat of last year, almost,” Simbal said.

It was the same story at MGM Resorts sports books, which got what amounted to a reprieve from the governor when the Bills beat the Chiefs 16-10 as 9-point underdogs.

“The only thing that really saved the day was the Bills winning outright. If we don’t get the Bills outright, we’re paying every parlay combination imaginable,” MGM Resorts sports book director Jay Rood said. “It would’ve easily been the worst day of the season if they didn’t go back to Tyrod (Taylor at quarterback).”

Taylor was replaced last week by rookie Nathan Peterman, who threw five first-half interceptions in a loss to the Chargers. Taylor threw a touchdown pass Sunday and Buffalo intercepted Alex Smith with 1:25 left as Kansas City lost for the fifth time in six games.

The biggest loser for the books — and biggest winner for bettors — was Carolina, which rallied for a 35-27 win over the New York Jets after closing as a 6-point favorite.

The Panthers, the No. 1 consensus play in the Westgate SuperContest, gave this writer and countless others a couple blasts to the ticker en route to the unlikely cover.

A roughing-the-passer penalty on third-and-11 at midfield kept Carolina’s ensuing drive alive. The Panthers faced a key third-and-4 at the Jets’ 28 with 1:12 left. Pick up the first down and they run out the clock. But Jonathan Stewart was stopped short.

That set the stage for Graham Gano, who nailed a glorious 45-yard field goal with 21 seconds left to cover and earn a spot on the Christmas card list of countless bettors.

“That was a huge swing for us. Really huge,” Rood said before Sunday night’s Steelers-Packers game. “If that doesn’t happen, we might actually win if we get the Packers. But (Sunday) is going to be a loss. It’s just a matter of how big.”

Rood said MGM Resorts took three six-figure wagers on the NFL. Bettors went 2-1, winning on the Panthers and Eagles and losing on the Chiefs.

A Steelers’ cover as a 14-point favorite over Green Bay would’ve resulted in the worst NFL Sunday of the season for several books. But the Packers hung tough, trading punches with Pittsburgh before losing 31-28 on Chris Boswell’s 53-yard field goal with no time left.

Philadelphia won its fourth straight game by at least 23 points, beating the Bears 31-3 as 13½-point favorites to breeze to its eighth consecutive cover.

Atlanta, a 10-point favorite over Tampa Bay, covered its third straight game following an 0-5 ATS skid when Tevin Coleman scored on a 14-yard run with 1:53 left for the final margin of 34-20.

“(The season’s) not shaping up to be real great,” Rood said. “Everybody’s starting to jump on the Eagles and the Patriots. All the popular teams are drawing all the action right now.”

The Browns, a 7½-point underdog at Cincinnati, were in position to cover for only the second time in 10 games when DeShone Kizer scored on a 3-yard run to cut the deficit to 23-16 with 6:57 left. But the Bengals answered with Joe Mixon’s 11-yard TD run on their way to a 30-16 win and seventh consecutive cover over Cleveland.

Like Clark Griswold’s one-year membership to the “Jelly of the Month” club, fading the Browns is the gift that keeps on giving the whole year.