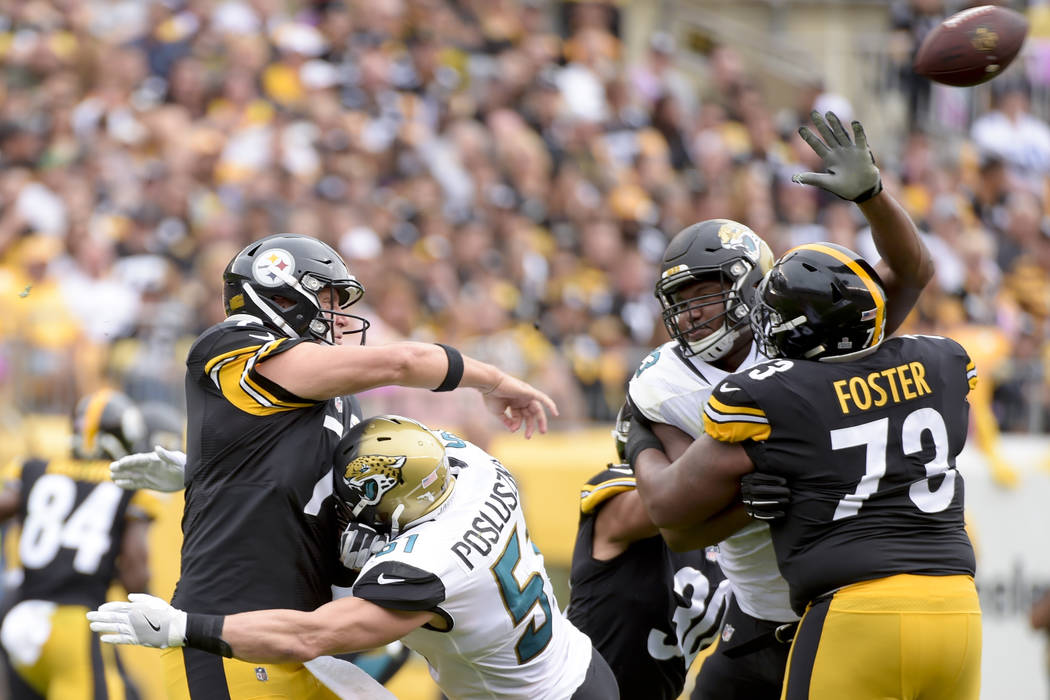 Pittsburgh Steelers quarterback Ben Roethlisberger (7) gets a pass away as he is hit by Jacksonville Jaguars middle linebacker Paul Posluszny (51) in the first half of an NFL football game, Sunday, Oct. 8, 2017, in Pittsburgh. (AP Photo/Fred Vuich)

The Steelers quarterback probably wished he’d walked away from the game after throwing a career-high five interceptions Sunday in a 30-9 home loss to the Jaguars.

Roethlisberger was picked off four times in the second half and two were returned for touchdowns as Jacksonville burned the betting public in the best decision of the day for Las Vegas sports books.

The Jaguars closed as 7-point underdogs.

“The Steelers losing that game outright was key because it killed a lot of money lines and teasers,” Boyd Gaming sports book director Bob Scucci said. “When Big Ben was talking about this being his last year and retiring, you have to question how motivated he’s going to be this season.”

Surprising Jacksonville, which has alternated wins and losses this season en route to an AFC South-leading 3-2 record, has the NFL’s No. 1 pass defense.

“That defense of the Jaguars is the real deal,” Golden Nugget sports book director Tony Miller said. “But it’s hard to figure out how the Steelers got beat so bad at home. That’s parity in the NFL, man.”

Rodgers does it again

Sharp bettors won on Jacksonville, which was bet down from a 8½-point underdog, but lost on the Cowboys, who closed as 2½-point favorites over the Packers in a 35-31 loss.

After erasing an early 21-6 deficit, Green Bay trailed 31-28 with 1:13 left. The Packers were 7-1 on the in-play money line at William Hill before Aaron Rodgers drove them 75 yards in 62 seconds for the winning score.

“It’s just Aaron Rodgers, man. He’s just that good,” Miller said. “The Cowboys have got to win every game 40-39 because their defense is really, really bad.”

Worst of the worst

The Browns are still brutal to watch, unless you’re betting against them. Cleveland lost 17-14 to the Jets after missing two field goals and getting stopped on fourth-and-2 at the 4 when a field goal would’ve tied it 10-10 early in the fourth quarter.

The Browns, Giants and 49ers are the NFL’s only winless teams at 0-5. But Scucci and Miller agree the Browns are still the worst of the worst.

Josh McCown threw two TD passes for New York, which closed as a 1½-point favorite and, at 3-2, is somehow tied atop the AFC East with the Bills and Patriots.

“It took me three years and two teams,” McCown said. “But dang gummit, I got me a win at FirstEnergy Stadium.”

Browns coach Hue Jackson is stuck on one dadgum win in Cleveland as he fell to frickin’ 1-20 with the team.

The sharps were on the Chargers early in the week, but when the Giants dropped to 3-point favorites, they jumped on the G-Men. That doesn’t make me feel any better about backing New York, which squandered a 22-17 fourth-quarter lead in its 27-22 loss to Los Angeles and lost Odell Beckham Jr. to a fractured ankle along the way.

“They’re really done now that Beckham’s out for the year,” Miller said.

San Francisco, a 1-point underdog to the Colts, lost 26-23 in overtime after rallying from 14 points down in the fourth quarter to tie it.

“The Niners are in every game,” Miller said. “They might be 0-5, but they’re still alive.”

Favorites went 6-6 on what Miller called a “so-so day” for the books. Underdogs swept the three afternoon games, including Seattle’s 16-10 win over the Rams as 2-point underdogs in which Los Angeles had five turnovers.

“I never thought I’d see the Seahawks getting points against the Rams,” Miller said.

The Chiefs are the NFL’s only unbeaten team at 5-0 and they’re also 5-0 against the spread after beating the Texans 42-34 on Sunday night as 2-point favorites in a game they never trailed.

The Packers, Panthers and Eagles are each 4-1 and leading their divisions. Carson Wentz threw a career-high four TD passes as Philadelphia cruised to a 34-7 win and cover as 6½-point favorites over the Cardinals.

“The Eagles might be the real deal,” Miller said. “Carson Wentz is going to be really, really good. He looks so poised with that team right now. They’re, by far, the best team in the NFC East.”

At the moment, Wentz also is the best quarterback in Pennsyslvania.