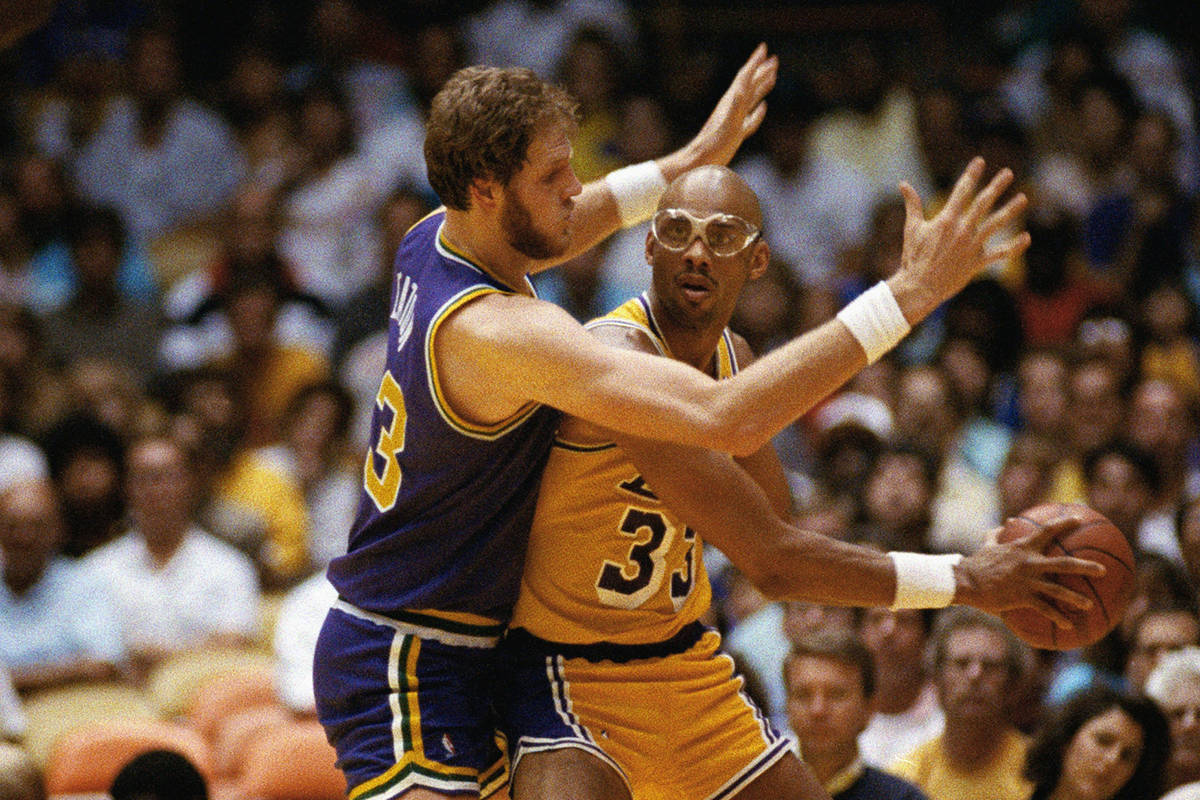 Mark Eaton of the Utah Jazz seems to have Los Angeles Lakers player Kareem Abdul-Jabbar in hand during their NBA playoff game at the Forum in Inglewood, California May 8, 1988. (AP Photo/Douglas C. Pizac)

For Las Vegas sports fans of a certain age, the image is frozen in time.

Kareem Abdul-Jabbar, dressed in Forum Blue, flicking a sky hook toward the basket against the Utah Jazz.

An even bigger guy, in a white uniform with purple, green and yellow piping, flailing his arms in a futile attempt to block it.

History being made as the ball nestled into the net for the 31,420th and 31,421th points of Abdul-Jabbar’s illustrious career, moving him past Wilt Chamberlain atop the NBA’s career scoring list.

The big guy wearing Mardi Gras trim was Mark Eaton, who was 64 when he died May 28 after apparently crashing his bicycle in Utah.

“When that picture came out of Kareem scoring and Mark unsuccessfully defending … he thought that was going to be (how he was remembered),” said longtime Las Vegan Laura Herlovich, the Jazz’s public relations director during the 1983-84 season when the NBA club helped christen the Thomas & Mack Center by playing 11 home games in Las Vegas.

“As I read the summaries of Mark’s career, they’ve been so glowing. Isn’t it nice that his legacy is more than that one unsuccessful blocked shot?”

Despite seldom having gotten off the bench at UCLA, Eaton blocked 3,064 shots as a pro that twice led to him being named NBA Defensive Player of the Year and once to the league’s all-star team.

He also campaigned on behalf of other retired NBA players and made lasting friendships with contemporary ones, such as Jazz current big man Rudy Gobert, with whom he shared a passion for pedaling custom-made bicycles around scenic Utah vistas.

According to Herlovich and old game programs, Eaton stood 7-foot-4 but will always be remembered in his personal life for never looking down on anybody.

Want to impress elementary school me? Block a dunk attempt without even leaving your feet.

— Kris Bryant is having an MVP-type season for the Cubs that also is giving the team’s miserly owners a major headache.

The former Bonanza High star is part of Chicago’s holy trinity of pending free agents — he, Javier Baez and Anthony Rizzo all are in the last year of their contracts. It’s doubtful the Cubs can afford/want to keep all three, and it was thought Bryant would be first to go in a trade.

But now he’s hitting .316 with 13 homers and 38 RBIs and the surprising Cubs are in first place.

Surmised Front Office Sports: “Sell Bryant now, and the Cubs risk tossing away a division title and postseason run. Hold on to him, and they risk a second-half regression — or his decision to walk this winter with all the leverage to find a deal elsewhere.”

— Tim Neverett, the former play-by-voice of the Las Vegas Thunder hockey team, is accepting pre-orders for his book chronicling the Dodgers’ 2020 championship season from his perch in their broadcast booth. To reserve a copy of “COVID Curveball: An Inside View of the 2020 Los Angeles Dodgers World Championship Season” visit https://tinyurl.com/y5bu35br .

Very excited to announce my new book is now available for pre-order. pic.twitter.com/QO4lZcSRz5

— Before the Oakland A’s try to round up the billion dollars it will take to move to Las Vegas, they should first spring for Happy Meals for their minor league players. A’s president Dave Kaval, who was here on a fact-finding mission last week, apologized to A’s farmhands after photos emerged of postgame meals that were the opposite of happy.

This was totally unacceptable. When we found out several weeks ago we terminated the third party vendor. We apologize to our players, staff, and coaches. We will redouble our efforts to provide the best options for our team at every level. https://t.co/yPzVWiCx1D

— Las Vegan Kurt Busch is a leading candidate to partner with Bubba Wallace next season at 23XI Racing, the NASCAR team owned by Michael Jordan and Cup Series star Denny Hamlin. … Elmo Wright, the ex-Houston Cougars’ wide receiver credited with inventing the end zone celebration, will be inducted into the National Football Foundation & College Hall of Fame Dec. 7 at Aria. … Spanish soccer side Villareal has opened an academy in Las Vegas and will hold tryouts Tuesday-Thursday at Heritage Park and the Kellogg Zaher Soccer Complex. Visit https://www.villarreallasvegas.com/ for more.

“The thing that I got out of the game was much broader than simply a memory of a touchdown.”

You know you are getting old when you remember getting two seats on the 40-yard line for what the Raiders will charge to park your car at Allegiant Stadium.