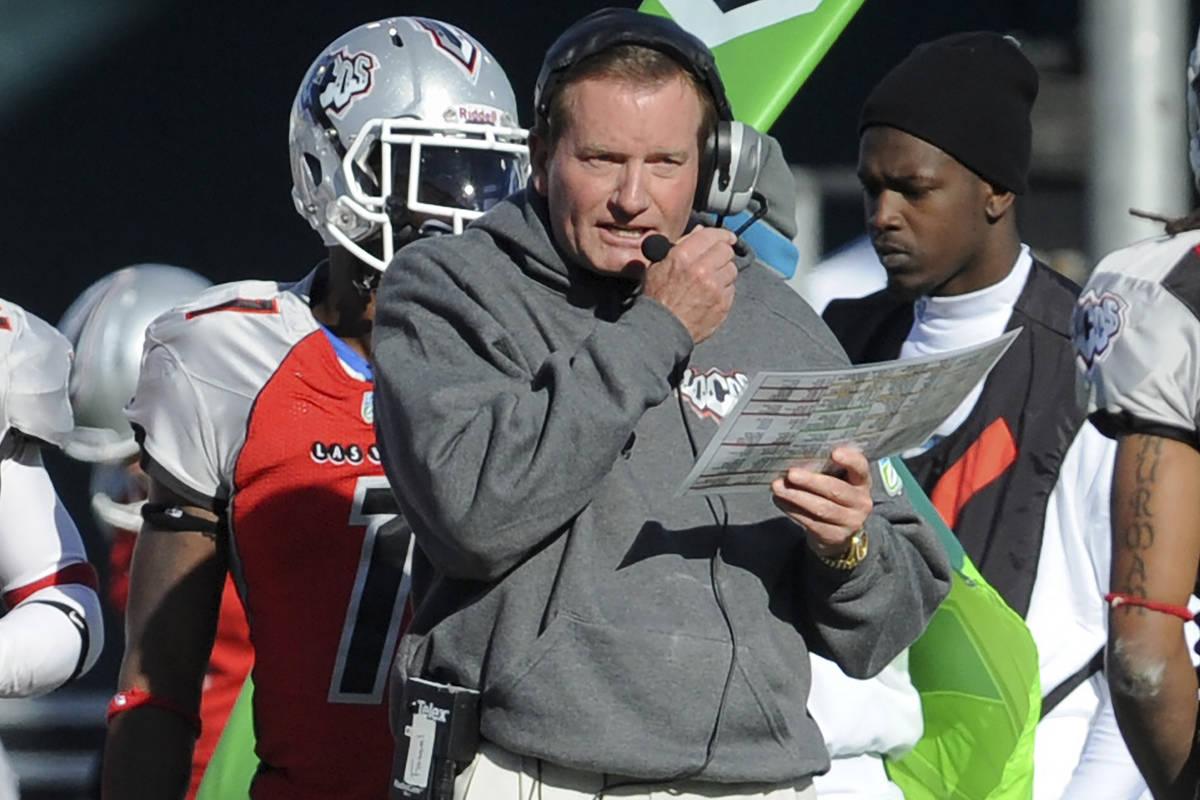 FILE - In this Nov. 27, 2010, file photo, then Las Vegas head coach Jim Fassel, center, looks on from the sideline during their United Football League title game against Florida in Omaha, Neb. Former New York Giants coach Jim Fassel has died. He was 71. Fassel was named NFL coach of the year in 1997 and led the team to the 2001 Super Bowl. Fassel’s son confirmed the death to the Los Angeles Times on Monday. (AP Photo/Dave Weaver, File)

He had coached the Giants in the Super Bowl, so Jim Fassel had been to the top of the football mountain. But the last time we spoke, he was preparing the Las Vegas Locomotives to play the Florida Tuskers in the 2011 United Football League championship game — the foothills of pro football.

I thought it might be OK to ask Fassel — who was 71 when he died Monday in Las Vegas after suffering an apparent heart attack — about his experience in the World Football League, a slightly higher football foothill. Fassel was kind enough to humor me.

I had read where he had thrown the last pass in the WFL’s short but colorful history, at least if you go by the uniforms.

Fassel had been a backup quarterback for The Hawaiians, who, like most WFL teams, ran out out of money during the 1975 season.

Quarterbacks Rick Cassata and Sonny Sixkiller quit the team. Fassel already had retired after a knee injury. He was driving a truck in Utah when Hawaiians coach Mike Giddings called to ask if he wanted to play quarterback against Pat Haden and the Southern California Sun in what would be the last WFL game ever played.

“I told him I hadn’t thrown a ball in a year, who else you got?” Fassel recalled. “He said they had a local kid (Milt Holt, who had a job at Honolulu City Hall) and I said, ‘Why don’t you play him?’ I still hadn’t gotten my knee fixed.”

Fassel agreed to be Holt’s backup. He received $500 and round-trip airfare to Honolulu. He had no recollection of the game.

The Hawaiians lost 26-7. Statistics on a website dedicated to preserving the WFL’s memory show Holt completed 5 of 16 passes for 91 yards. Fassel was 1 of 3 for 10 yards.

He said he had no idea where the story about him throwing the league’s last pass came from. But circumstantial evidence suggests it probably is true. The game was played in Hawaii, so it would have started later than the other WFL games scheduled that day, and Fassel presumably replaced Holt toward the end.

I recall him saying the WFL was planning a reunion and that he probably would attend.

When I read he had died, I regretted never having asked him how that went.

■ Former Silverado High star Chase Bradford was beneficiary of a triple play in the Triple-A Gwinnett Stripers’ 8-5 extra-inning loss to the Jacksonville Jumbo Shrimp on June 5.

Bradford, a former 35th-round draft choice trying to make it back to the big leagues with the Atlanta Braves’ top farm club, induced a ground ball to third baseman Johan Camargo, who tagged a Shrimp racing for third. Camargo threw to second baseman Jason Kipnis, who relayed to first baseman Travis Snider, completing the trifecta.

■ Stan Musial having amassed 1,815 hits at home and 1,815 on the road over 22 seasons has to be one of the most peculiar statistics in sports history. But the stat line for former New Mexico star Tony Snell, who was playing for the Milwaukee Bucks against the Utah Jazz in a 2017 game — 28 minutes, 0 points, 0 rebounds, 0 assists, 0 blocks, 0 steals — merits an honorable mention.

There’s more: Playing this season for the Atlanta Hawks, Snell became the first player in NBA history to have a 50/50/100 percentage season. The ex-Lobo shot 50.9 percent, 56.9 from beyond the arc and 100 percent from the free-throw line.

Tony Snell running up and down pic.twitter.com/NCEJIlTxLS

■ Statistic that fell through the cracks: This season was the first time in the past 31 the UNLV golf team did not qualify for the NCAA regionals, though the Rebels’ Jack Trent went as an individual and finished tied for 19th place. UNLV’s 31 consecutive regional appearances is an NCAA record.

A year ago during the midst of the pandemic, Raiders president Marc Badain said he still was bullish on bringing major soccer events to Allegiant Stadium. CONCACAF (the federation for soccer in North and Central America and the Caribbean nations) announced Friday that the 2021 Gold Cup Final, scheduled Aug. 1 inside Allegiant, sold more than 60,000 tickets in just 90 minutes.

A complete sellout. In an hour and a half.

Now you know why the Raiders are bullish on soccer.