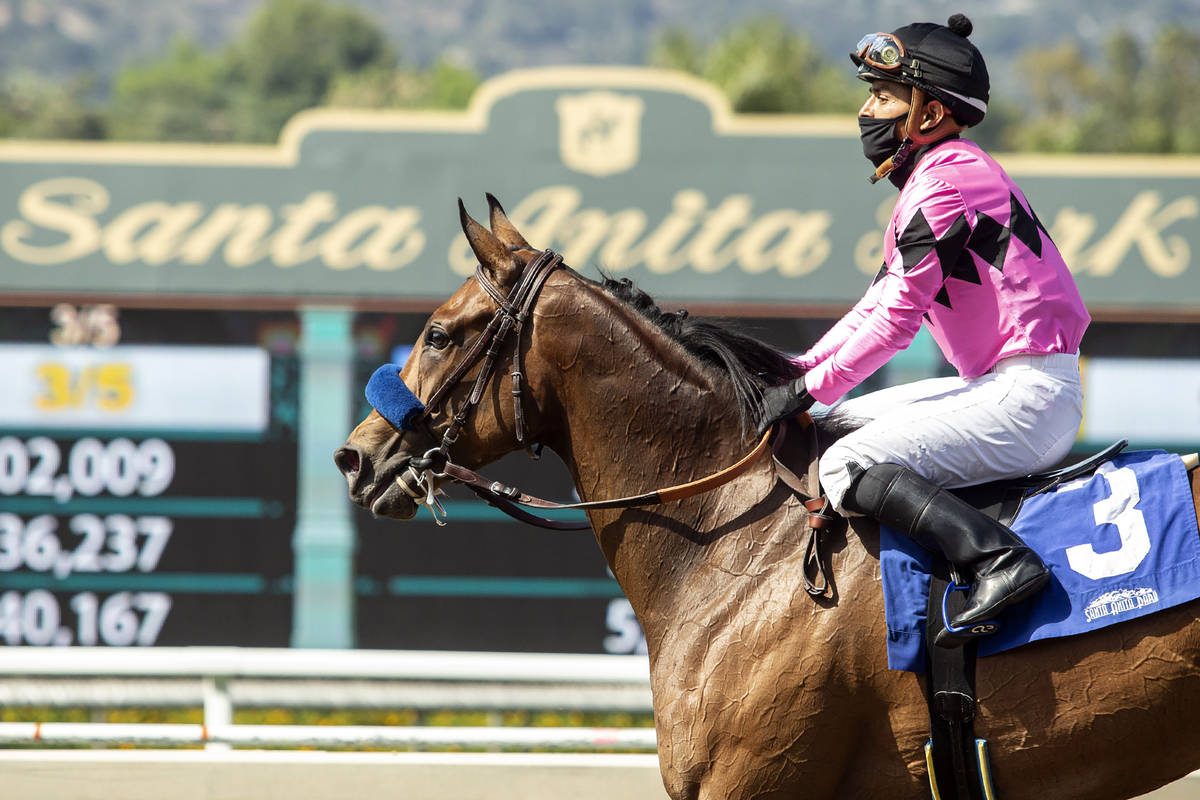 In this image provided by Benoit Photo, Abel Cedillo, top, leads Fighting Mad to the Winner's Circle after their victory in the Grade II, $200,000 Santa Maria Stakes horse race Sunday, May 31, 2020, at Santa Anita Park in Arcadia, Calif. (Benoit Photo via AP)

“Nothing to see here. Move along,” the traffic cop tells rubberneckers trying to catch a glimpse of a nasty car crash.

The feeble attempt at diversion always fails for the simple reason that people are fascinated by tragedy. If the accident turns out to be a fender-bender, they quickly lose interest and go their merry way. But if the cars are on fire and people are screaming and crying, the desire to pull over and gawk grows exponentially.

The news business was built on an understanding of this fundamental human behavior. That’s why you likely didn’t hear about the absence of fatal breakdown at the most recent meetings at Del Mar and Santa Anita, which drew next to no coverage in the Southern California news media.

Nor did I hear much buzz from those who dutifully lined up almost daily outside both facilities last year to protest a sharp increase in equine deaths, most of them at Santa Anita Park.

On the assumption that you did in fact miss the news, this is it:

— Del Mar concluded its five-week Bing Crosby meeting on Sunday, doing so without a single equine fatality during racing.

— That followed a perfect 16-day autumn meet at Santa Anita Park, which reported no racing or training fatalities between Sept. 5 and Oct. 23. During that period, 1,106 horses raced over the dirt track and turf course and reported 51,200 training sessions, including 3,771 timed workouts over the main track and 487 over the training track, according to track statistics.

Contrast that to last year, when critics were literally at the gates of both facilities demanding that the “barbaric” sport off horse racing be shut down once and for all after 49 horses died at Santa Anita during its winter-spring meet.

Since emotions run so high on the topic, why so little fuss on an obvious occasion for celebration? I wondered.

So I called Kathy Guillermo, a senior vice president with People for the Ethical Treatment of Animals, better known as PETA, to find out why the organization wasn’t making more of the success.

“We did tweet about it, but didn’t do a press release,” she said of the low-key response, adding that she also sent notes of congratulations to Belinda Stronach, chairman and president of the Stronach Group, which owns Santa Anita, and Joe Harper, the CEO of the Del Mar Thoroughbred Club.

Guillermo said she’s supportive of the additional safety measures taken by the tracks, including purchasing new scanning equipment and hiring more veterinarians to ensure that every horse is examined before it races. But more needs to be done, she said, mentioning purchasing more advanced CT scanning equipment and banning any medication within two weeks of a race as possible next steps.

“What I like about what has happened at Del Mar and Santa Anita is that it shows that it can be done,” Guillermo said. “I’ve never believed that the deaths are inevitable. If they are, then racing should be done.”

The long-running contract dispute between the Nevada Pari-Mutuel Association and Churchill Downs Inc. has shut access for horse players to another track: the Fair Grounds in New Orleans.

You can read additional background on the dispute in this column I wrote in January.

It is with some sadness that I’m suspending the #RJhorseracing handicapping contest.

It’s been a lot of fun for the roughly 25 of us who played most weeks, but it also turned out to be a lot of work. (It’s also true that my closet and bookshelves were coming dangerously close to running out of the “semi-fabulous prizes” I handed out to the winners.)

So I’m taking a break and thinking about other ways to get more players involved. Stay tuned. If you have any ideas, I’d love to hear them.